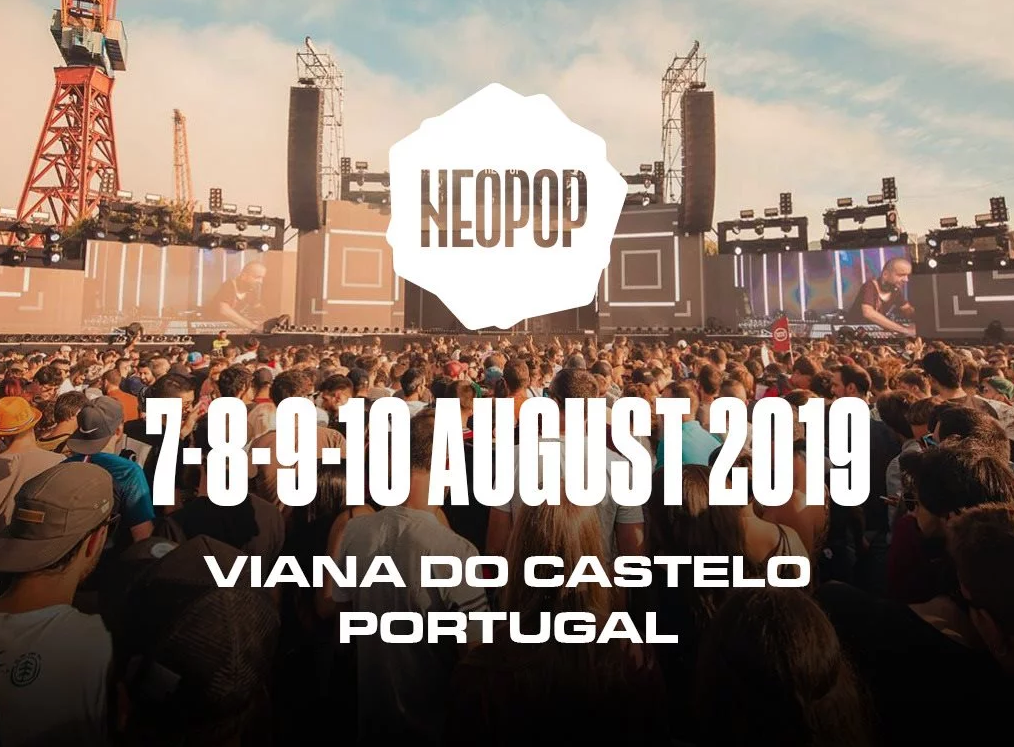 The 2019 edition of Neopop is one of the best yet with a mammoth line up of some of the world’s best techno talents.

It unfolds from Wednesday August 7th to Saturday August 10th on the beautiful Atlantic Ocean in Northern Portugal’s Viana de Castelo, a historic region that is baked in sun.

Tickets start at 60€ and are available from the Neopop Festival website. 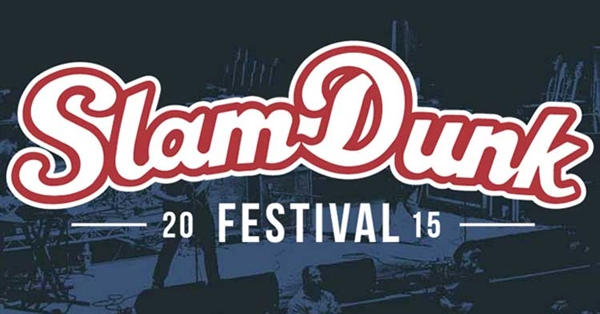 All Time Low are set to headline Slam Dunk Festival 2019; Their exclusive UK Shows of 2019.

Also joing them will be NOFX, New Found Glory, Waterparks, Story Of The Year, Gallows, Mad Caddies and Silverstien; These are just the first wave of acts confirmed.

Not only that, Slam Dunk have confirmed a larger site for Slam Dunk North After the huge success of Slam Dunk’s move to Hatfield House last year, the festival has also announced plans for a new site for Slam Dunk North, moving to Leeds’ Temple Newsam Estate so even more pop-punk fanatics can make their way to the definitive date of the alternative diary. Reaching across two stunning greenfield sites in Leeds and Hatfield on Saturday 25th and Sunday 26th May 2019 – Slam Dunk 2019 is the next evolution for the go-to destination of rock.

TICKET INFORMATION
Tickets are on sale now and are available from http://slamdunkfestival.com/
Ticket Price £59. All subject to booking fees.

Slam Dunk Festival is also proud to announce the stage splits for this year’s festival where the Jagermeister Stage is set to play host to pop-punk titans Good Charlotte as they make their Slam Dunk Festival debut, alongside arena rockers PVRIS and ferocious Frank Carter & the Rattlesnakes, as well as amazing acts such as State Champs, Knuckle Puck, Four Year Strong and of course, Sleeping with Sirens and Creeper.

The Monster Stage will be the place to catch emo-rock legends Jimmy Eat World as they celebrate their 25th anniversary with their first performance at Slam Dunk Festival. Showing them how it’s done will be Taking Back Sunday who will unite the crowd with heartfelt singalongs with additional performances from  Lower Than Atlantis, Moose Blood, and Twin Atlantic, the Monster Stage will also see unmissable reunion performances from The Audition and The Dangerous Summer.

This year’s Fireball Stage will see fan-favourites Reel Big Fish’s return to Slam Dunk as this stage’s headline alongside Californian legends Goldfinger, Brit reggae-punks The Skints, with Zebrahead and Capdown as they join Save Ferris, King Prawn, Guttermouth and Templeton Pek for the biggest punk & ska-party of the year!

This year’s Fireball Stage will see fan-favourites Reel Big Fish’s return to Slam Dunk as this stage’s headline alongside Californian legends Goldfinger, Brit reggae-punks The Skints, with Zebrahead and Capdown as they join Save Ferris, King Prawn, Guttermouth and Templeton Pek for the biggest punk & ska-party of the year!

Known for bringing the heavy, the Impericon stage has all bases covered this year with American hardcore punk rockers Every Time I Die topping the bill. In addition to these incredible heavyweights, the Impericon Stage also welcomes the return of Canadian leaders Comeback Kid, Northlane, Crown The Empire, The Devil Wears Prada and Astroid Boys. Counterparts, Brutality Will Prevail and Loathe will be appearing here at Slam Dunk Festival for the first time ever.

Over on this year’s Signature Brew Stage, Patty Walters will be leading As It Is to the top, following highly-anticipated sets from UK pop-punk front-runners ROAM, Trash Boat and Woes and favourites Can’t Swim and Broadside. New additions Me Vs Hero & Homesafe will be also now joining them!

One for the new music aficionados, the Rock Sound Breakout Stage will see the hottest new bands perform. Canadian troupe Palaye Royale, American favourites Chapel and Dream State will appear alongside Grayscale, Holding Absence, Milestones, Sleep On It, Stand Atlantic and The Faim.

Paying homage to Slam Dunk Festival’s humble beginnings, the acoustic Key Club Stage is packed with some of the most exciting acts in contemporary rock music. Warming up the stage for headliners Speak Low If You Speak Love will be UK natives Rob Lynch, Luke Rainsford and Cavetown before an American invasion of Four Year Strong, PVMNTSand Selfish Things.

In the biggest line-up to date, Slam Dunk Festival 2018 is set to play host to an unparalleled exhibition of pop-punk movers and shakers as it welcomes blistering performances from co-headliners Good Charlotte and Jimmy Eat World, a reunion exclusive from The Audition (Worldwide exclusive) as well as highly anticipated sets from the likes of Frank Carter & The Rattlesnakes, PVRIS, Taking Back Sunday, Creeper, Every Time I Die, Sleeping With Sirens and many more. Whether you’re at Leeds City Centre on May 26th, Hatfield Park on May 27th or Birmingham’s NEC, Slam Dunk Festival 2018 will be the ultimate alternative party of the summer.

This is a Festival you dont want to miss out on so make sure you buy your tickets soon and get planning who you'll be seeing this year!

TICKET INFORMATION
Tickets on sale now and are available from http://slamdunkmusic.com/
Cost £49 or £55 including the infamous afterparty. All subject to booking fees.

Today Slamdunk Festival annouced the final acts to join the 2018 line-up and there none other than Watford mob Lower Than Atlantis, emo icons Say Anything, Chicago favourites Homesafe and easycore heroes Me Vs. Hero will join the impressive line-up.

A true phenomenon within British rock music, Lower Than Atlantis began last year with a blistering headline show at London’s prestigious Brixton Academy following the release of their fifth studio album ‘Safe In Sound’ which achieved #8 in the UK official album charts. Armed with an arsenal of anthems from their critically-acclaimed back catalogue, the Watford troupe’s appearance Slam Dunk Festival will make for a truly undeniable display of British rock excellence.

Mike Duce of Lower Than Atlantis says;
“Slam Dunk is one of my favourite festivals in the world! The crowds are always up for a laugh and I feel like almost every band’s sets feel like a headline set. It’ll also be really nice for us to see all our mates that are in other bands. Social media content for days, a banging rock n roll show and then we make the big party!”

The brainchild of frontman Max Bemis, Say Anything are undeniable pop-rock figureheads, steadily releasing exemplary album after album despite multiple lineup changes in their long-standing career. Responsible for the powerfully imaginative single ‘Alive With The Glory of Love’ and subsequent hit tracks such as ‘Wow, I Can Get Sexual Too’, the electrifying ‘Give A Damn’ and theatrical ‘Boyd’ which featured Sherri Dupree-Bemis, the Californian kings are set to storm the stage when they return to Slam Dunk Festival in May, following their last appearance at the festival in 2012.

Homesafe, one of the hottest new names in pop-punk in recent years, see Knuckle Puck’s Ryan Rumchaks switch from bassist to frontman to deliver one of the most-anticipated sets of the weekend as they will be their debut UK performances. Live performances of ‘Relapse’, ‘Resolve’ and ‘When You Left’’ are not to be missed.

In addition to these names, Slam Dunk Festival are proud to announce the exclusive reunion show of their old and treasured friends, Me Vs Hero. Mixing up pop-punk, hardcore and occasional heavy metal breakdowns, the original UK kings of easycore are back for Slam Dunk, playing their debut album ‘Days That Shape Our Lives’, in full over the weekend.

Make sure you dont miss out!

TICKET INFORMATION
Tickets on sale now and are available from http://slamdunkmusic.com/
Cost £49 or £55 including the infamous afterparty. All subject to booking fees.

Slam Dunk Festival have announce that there will be a joint headliner for #SDF18 and it will be none other then the legends that are Good Charlotte accompanying previously announced headliner Jimmy Eat World.

Also Joining them on the line-up will be: PVRIS, Frank Carter & The Rattlesnakes, Thursday, Creeper, Every Time I Die, Real Friends, Knuckle Puck & Crown The Empire.

And incase you missed it these bands have already been announced: Taking Back Sunday, Sleeping With Sirens, STATE CHAMPS, Four Year Strong & Trash Boat.

Get your tickets and download the #SDF18 app now @ http://slamdunkmusic.com

The headliners will be Jimmy Eat World with their debut Slam Dunk Performance, performing alongside Taking Back Sunday for the first time at a festival in the UK!

Also joining them will be Sleeping With Sirens, STATE CHAMPS, Four Year Strong and Trash Boat! This is the first of many announcements so stay tuned! for updates.

Tickets on sale from Friday 17th November 9am from: http://slamdunkmusic.com/tickets

OVER 60 ACTS TO BE ANNOUNCED ACROSS 8 STAGES

Slam Dunk Festival is set to return for it’s biggest year to date and is delighted to announce that Slam Dunk South will now take place at Hatfield Park, having outgrown its former home in Hatfield, the University of Hertfordshire.

Over double the size of the previous location, Hatfield Park is located in the grounds of Hatfield House and situated directly opposite Hatfield train station, making it even more accessible and accommodating for festival goers wishing to revel in Slam Dunk Festival’s alternative extravaganza.

Festival Director, Ben Ray comments:
‘Slam Dunk Festival South has been taking place in Hatfield since 2010 so the town has truly become our home. Therefore, I am extremely happy we managed to find a new site still within the town. We are sad to leave the University however the event was selling out months in advance so we knew we had to move it and make it bigger due to demand from the fans.’

In 2018, Slam Dunk Festival will begin in it’s spiritual home of Leeds, Millennium Square, before travelling to the new location of Hatfield Park, and finishing at the beloved Birmingham NEC. The first set of artists will be announced on Wednesday 15th November.

Tickets on sale at 9am, Friday 17th November from http://slamdunkmusic.com/

Cost £49 or £55 including the infamous afterparty. All subject to booking fees.

New for 2018 will be an installment scheme. Customers will be able to reserve their ticket for a small cost and pay the rest in installments up to the event