The main stage will be hosted by drinkinbrighton.co.uk and will be headlined by local boys Rizzle Kicks.  Rizzle Kicks are one of the biggest names in urban music having sold over a million singles in the UK and released their debut album Stereo Typical, a mixture of pop and hip hop incorporating elements of the old skool hip-hop era circa 1988 – 92.  Their eagerly anticipated new album is set this summer and the boys will have festival goers partying along to the anthemic pop of When IWas A Youngster, Mama Do The Hump and Down With Trumpets at what will be a massive homecoming show. 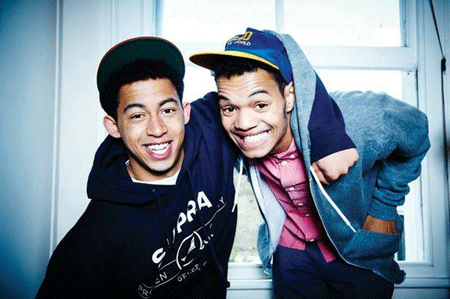 Britain’s urban pop superstar Labrinth is also confirmed to perform.  Fresh off his UK tour with Plan B and Rudimental, Labrinth is the ultimate showman, and is set to perform his enormous hits Pass Out, Let The Sun Shine, Earthquake, Last Time, Beneath Your Beautiful and more.  Labrinth has collaborated with the likes of Tinie Tempah, Plan B, Emeli Sande and Wretch 32 since he exploded onto the scene in 2010 and was subsequently signed to Simon Cowell’s Syco label.  His blend of R n’ B, Hip Hop and dubstep has marked him out as a key player in UK music.
DJ Fresh will be playing with a full live band, a real coup for Shakedown as he performs all the colossal hits from his Nextlevelism album, Hot Right Now, Louder, The Power, Gold Dust and The Feeling as well as classic tracks.  Expect a monstrous set of drum & bass, dubstep and electro house for this electronic aristocrat.
Maverick Sabre is a singer/songwriter with soul in abundance and his set will showcase his outstanding take on soul and r n’ b while DJ Jacob Plant also performs.  Jacob has just released his huge track Shakedown on Calvin Harris’s label Fly Eye and was written to open his set at the festival in 2012.   Also performing on the main stage will be Delilah who will bring a little London swagger, the legendary Jaguar Skills with his eclectic multi-genre, cut-n-paste DJ’ing and the hip hop of Ed Sheeran cohort Mikill Pane.
The Supercharged Arena is back in 2013 with a plethora of heavyweight DJ’s.  Sub Focus is one of the superstars of bass music, a production obsessive whose attention to detail is matched only by the raw spectacle of his incredible DJ sets.  A bone fide cross over artist Sub Focus is that rare thing in dance music, someone who can keep one foot in the underground and still have credible radio hits.
Zane Lowe can’t get enough of Shakedown as he returns for a third successive year.  The Radio 1 new music legend needs no introduction and his previous sets at Shakedown have been a festival highlight.  Popular demand sees him return to inflict further musical mayhem on the south coast.
Shakedown is thrilled to announce a four hour RAM Records takeover in the Supercharged Arena.  RAM Records is the legendary drum & bass label that hosts sell out, road block sessions every other month at Fabric as well as one off events all over the world.  They have a roster of the most influential global drum & bass DJ’s and they bring four of their finest to Shakedown for a mammoth session which is sure to be a mecca for clubbers from across the UK.
Award winning Brighton boy Krafty Kuts riotous DJ skills have earned him a reputation as a DJ of some repute whilst A Skillz incredible deck talents have marked him out as the party rocker extraordinaire.
Shakedown was the stand out dance music festival in 2012 and the promoters continue to strive to provide an electronic music experience for their audience.  In addition to the main stage and Supercharged Arena, Shakedown will be introducing aHouse and Future Bass Arena for 2013, providing festival goers with even more destinations to enjoy the electronic sounds of today and tomorrow.  The line-up for the House and Future Bass Arena will be announced shortly as will many more names across all the stages as Shakedown returns to the UK’s party capital for the final festival of the year.
FacebookTweet