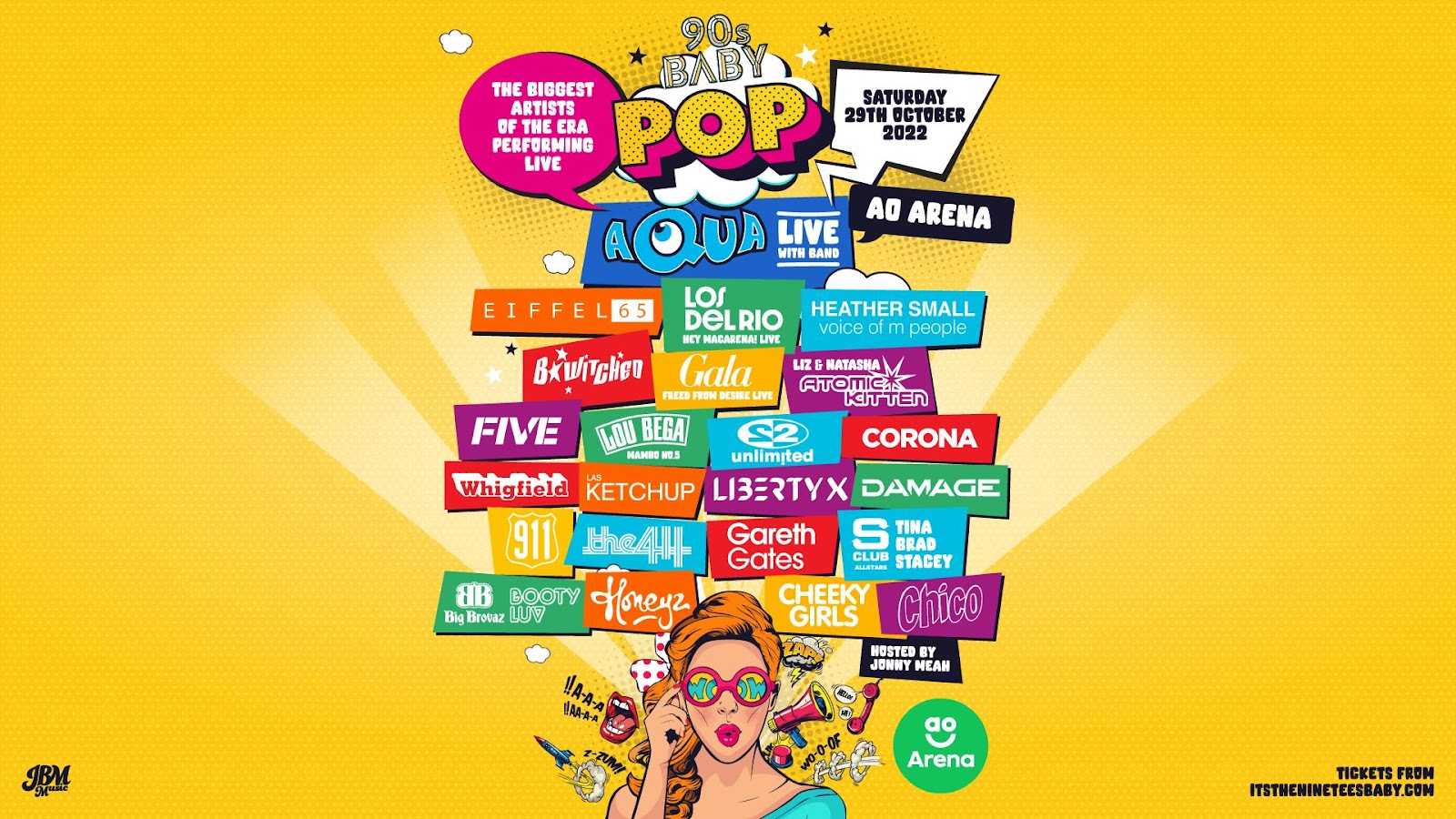 Hold onto your seats, this show is about to blow you away. 90s Baby brings you the greatest 90s pop artists performing live at the monumental AO Arena. This is a once in a lifetime opportunity to see all your favourite 90s pop artists together for one night and guarantees to transport you back to simpler times.
The multi-platinum song Barbie Girl arguably sums up the late 90s pop era by itself and its europop creators, Aqua, will be performing live this October. Hailing from Turin, Italy, Eiffel 65 came together in 1997 and the group quickly gained global popularity. Their singles Blue (Da Ba Dee) and Move Your Body from the album Europop proved immensely successful worldwide.  Heyyy Macarena! We’ve all heard those legendary lyrics at parties up and down the country. We’re bringing Los Del Rio to the arena, the creators of the globally successful tune Macarena released in 1993.
British soul singer, Heather Small joins us and is the lead singer in the group M People which went on to win Best British Dance act at the Brit awards in 1994 and 1996. Lou Bega’s performs live! His iconic tune Mambo No. 5 topped the charts in most European countries including France, Germany, and the UK. Next up, Gala’s incredible tune Freed From Desire – another Eurodance belter from 1996 which peaked at number 2 in the UK charts for 8 weeks.
Atomic Kittens formed in 1997 and their songs Whole Again and The Tide Is High captured an era. Two original members, Liz and Natasha will be performing these classics and more live. Irish girl group B*Witched also join us, best known for their tunes C’est La Vie, Rollercoaster, To You I Belong and Blame It on the Weatherman. These songs all reached number one and the group sold millions of records worldwide.
2 Unlimited’s legendary acid-house track Get Ready For This released in 1991 and reached dizzying heights across the globe. Corona created seminal dance tracks such as The Rhythm of the Night released in 1993, which is up there with the best dance music to come out of the 90s. Italian dance act Whigfield created the legendary tune Saturday Night in 1993 and joins us at 90s Baby. We can’t wait for you to see them! 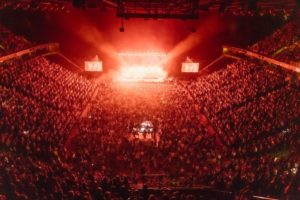 Las Ketchup’s The Ketchup Song (Asereje) sold over 7 million copies worldwide and immediately transports you to those early noughties’ times. British boy band Five formed in 1997 and released their tracks Keep On Movin’ and Everyone Get Up several years later. Their hip-hop and dance tunes are not to be missed. 20 years ago, fledgling popstar group Liberty X came onto the scene and in just a few years went on to become UK superstars. They released ten consecutive UK top 20 singles such as Just A Little and Got To Have Your Love.
British boy band, Damage, had huge success in the 90s with eleven hit singles such as Forever – Lady of Soul and Wonderful Tonight and of course the legendary Ghetto Romance! Also performing live is 911, the iconic 90s boy band who have had international success, having sold over 15 million singles and albums worldwide. The female British group The 411 captured an era with their song Dumb with its smooth R&B vocals and catchy lyrics and have reformed once more to perform live at 90s Baby. London’s hip-hop group Big Brovaz known for Booty Luv also join us, promising to deliver nostalgic 90s vibes. Chico starred in the quarterfinals of The X Factor and is best known for his number 1 single It’s Chico Time in 2008.
The truly iconic Gareth Gates performs live on 29th October 2022. Starting his career on Pop Idol, Gates went onto achieve immense success in the early 2000s and is best known for his tracks What My Heart Wants and Go Your Own Way. S Club Allstars includes original band members Tina, Brad, Stacey who will be performing some of S Club’s most iconic tracks. S Club 7’s You’re My Number One was reached number 2 in the UK charts and its success increased through the noughties.
We’re excited to have the British R&B girl group, Honeyz join us in this jam-packed line-up. They group skyrocketed across the UK charts with their tunes Finally Found in 1998 and Won’t Take It Lying Down in 2000. They’re not an act to miss. Finally, the Cheeky Girls will be performing live. Yes, they’re still going strong after their debut single Cheeky Song sold over a million copies internationally. Make sure you get your tickets soon before they’re snapped up! Let’s get ready for the biggest 90s pop show Manchester has to offer. 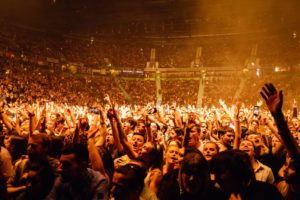