Download: Europe's biggest spiritual home of metal, rock and post hardcore. This year's line up was a diverse range of classic punk to death core such as Linkin Park, Aerosmith and Avenage Sevenfold. For many years Download has bought fans from across the country and surely caters to a diverse range of age groups for up to 90,000 fans. This year's Download had a lot of celebratory elements such as dedicating the main stage to the legendary Stephen Sutton after his amazing efforts for fundraising in aid of Teenage Cancer Trust. His dream was to attend the festival which he acomplished in 2013. Stephen unfortunately passed away last month after his battle with cancer. In rememberance, on Friday, during an interval, the whole of the festival gathered and engaged in a one minute applause as well as his signature 'thumbs up' sign.

Welsh band Skindred debuted at Download in 2006, this year was their fifth appearance and front man Benji Webb claims “We present the UK in Music.” Skindred’s original and iconic genre of mental, dancehall, jungle and punk had an elaborate twist when they mixed the Harlem Shake with their set. As any Skindred fan may know Newport Helicopter is a tradition of taking off their tops and spinning them around in the air. Next on was Black Label Society, and although the crowd didn't seem as involved as Skindred’s performance, the incredible talent of the guitarist made up for it throughout the duration of their set. Rob Zombie took to the main stage for this year's opening headliner, Avenege Sevenfold. Robs Zombie's promise to pull off a spectacular performance did not disappoint. Crazy attire, makeup and hair was awash with leathers, hippy flowing tops, dreads, awfully applied tribal style face makeup which all complimented his stage presence which was truly remarkable, hence the term "so bad, it's good". After this performance, the main arena started to progressively fill ready for Avenged Sevenfold. This being their first time headlining at Download, the band have slowly built up their name over the past 14 years to be one of biggest mental names in music today. The band stated “It feels amazing. It’s a true testament to our fan base for putting us there.” Their opening revealed the amazing Hail to the King tour set visuals, which wooed the crowd topping it off with fire and fireworks. Avenage Sevenfold really did suit being a headliner. Their performance was jaw-dropping and captured even for fans who are more fond of their older albums such as 'City of evil', their self titled album 'Avenged Sevenfold' and 'Waking the Fallen'.

Bowling For Soup, who are celebrating their 20th anniversary together, drew in the crowds with their popular classical punk, especially with there 90’s hits such as ‘Girls all the Bad Guys Want’ and ‘1985’. Bowling for soups high demand and their array of well loved hits these were the only band allocated two slots, one being on the main stage. Their hilarious banter got the crowd even more excited. The giant inflatable sheep as a stage prop which they also had on their 2011 appearance gave the band an opportunity to do something bizarre to the sheep, which seems to be a running theme for Bowling for Soup. Predictably, Fallout Boy gave an incredible performance on their glorious return, playing a mix of their ageless anthems such as 'Sugar We're Going Down,' 'This Ain't A Scene,' Michael Jacksons cover of 'Beat It,' as well their new stuff 'My Songs Know What You Did In The Dark,' which is currently in Radio 1's top 40 Rock singles. Linkin Park closed the night and performed an amazing array of 25 songs in 2 hours including their full 'Hybird Theory' album, telling the crowd "This is a special night for us, we've never done this before." Expectedly, the turn out of fans for this was epic as this was a rare moment for fans having the chance to experience their most popular album that was released in the year 2000. After their first album the band then played singles from their new album and to finish threw a signed album into the crowd after a scream off competition with opposite sides of the stage.

Sunday kicked off with Memphis May Fire on the Pepsi Max stage that included a lot of head banging from the fans and enthusiasm from the band. Many of the band's songs include ultimate breakdowns, which result in the crowd going wild. Similar to their performance in Febuary at KoKo Camden the band never fail to produce a good performance. Later in the evening the beautiful Taylor Momsen hit the Zippo Encore stage to perform with rest of the band members of The Pretty Reckless. During the set, Taylor engaged the audience with her sexy, seductive dance moves and played the fans' favorites 'Miss Everything' and 'Make Me Wanna Die.' The festivals finale headliner and the band everyone was waiting for, Aerosmith. This being their 44th year in the music industry this band know how to pull of a bloody good performance effortlessly delivered the highlight act of the festival. Getting the crowd to sing with him, and singing to women in the crowd as well witty banter in-between song, Aerosmith was the perfect band to finish an amazing weekend of talented musicians, oddly dressed fans, careless attitude and drunken insanity.

Check out the stage times for Download Festival 2014 right here! 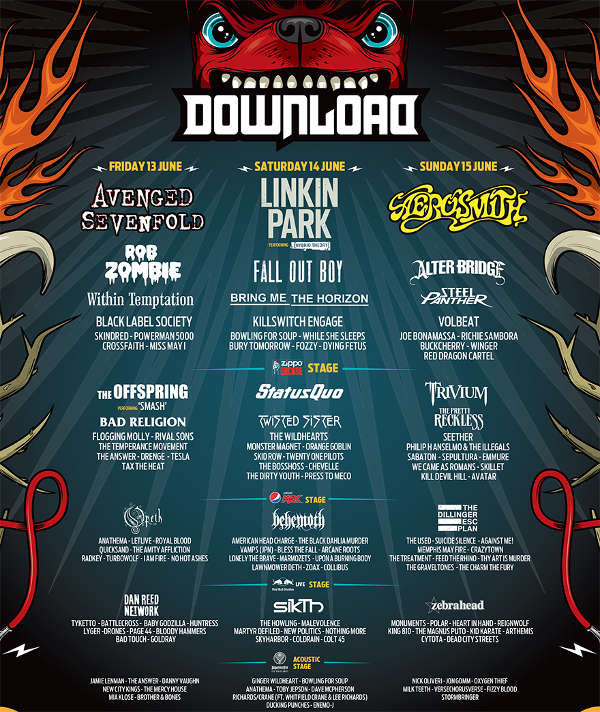 Avenged Sevenfold, one of the mightiest forces in modern rock, have  been announced as the first headliner for Download 2014.  Friday 13th June 2014 will mark a momentous occasion in the history of Avenged Sevenfold as they continue their tradition of spectacular Download performances, by becoming headliners for the very first time, not just at Download, but at any UK festival.

Saturday night at this year’s festival will be headlined by the Grammy Award winning Linkin Park, who will be playing their multi-platinum debut album ‘HYBRID THEORY’ in its entirety as part of their set.

The legendary Aerosmith will be closing the festival in 2014, when they headline on Sunday 15th June.  Joining them on the main stage as main support will be hard rockers, Alter Bridge.

Aerosmith are one rock’s most infamous and revered bands. Fronted by the iconic partnership of frontman Steven Tyler and guitarist Joe Perry, their generation spanning career has seen them sell in excess of 150 million records, making them the best selling American rock band in history. Despite having been a band for over 40 years, their incredible, ever expanding collection of hits continues to appeal to hoards of fans both old and new. Their headline performance at Download 2014 will be their first on UK soil since 2010, speaking on their return to Donington Park, Joe Perry said

“It’s been too long since we've been to England and we're sincerely f**ing charged to be coming back! See you there"

Joining Aerosmith in ending what is already set to be an incredible weekend, will be the heavy riffing, arena conquering Alter Bridge. The band released their 4th studio album, ‘Fortress’ earlier this year to huge critical acclaim. It’s been the band’s highest charting album in the UK, hitting the #1 spot on the rock charts and saw them sell out arenas across the country on their recent UK tour.

A limited amount of weekend with camping tickets for the Download Festival 2011, plus RIP packages, are on sale now from www.downloadfestival.co.uk. This ‘early bird’ offer ends 5pm Monday 20 December, and includes 3 day and 5 day camping tickets. Organisers have also confirmed that prices will remain the same for Download 2011 as they were in 2010.

Organisers have also confirmed that Grammy award winning musician / producer and director Rob Zombie will perform at next year’s Download – an incredible 16 years since he last played the Donington Park site with his then band White Zombie.

Since forming in 1996, Linkin Park have gone on to win two Grammy awards and sold over 50 million records worldwide, and they recently released their fourth studio album A Thousand Suns which went No. 1 in 10 countries as well as No. 2 in the UK. Known for unique collaborations with alternative and hip hop artists, Linkin Park’s headlining performance at this year’s Download will be a true highlight of the weekend.

Linkin Park frontman Chester Bennington said: “We are very excited to be playing Download again next year. It’s one of the best festivals in the world and it’s always an honour to play in front of such a great crowd. We can’t wait!“

Rob Zombie founded the metal band White Zombie and has since carved a successful career as a horror producer and director, notably for movies House Of 1000 Corpses and The Devil’s Rejects. He released his new album Hellbilly Deluxe 2 earlier this year.

Live Nation VP of Promotions Andy Copping commented, “It’s great to have LINKIN PARK back at Download next year. They’ve always put on a great show and following the success of their recent sold out UK tour, it was essential to have them at Download, where they will deliver their full-on live show.“

Over 100,000 fans descended onto Download this year to celebrate 30 years of rock at Donington, making Download the second biggest festival in the UK after Glastonbury. It has the largest Facebook community for a UK festival coming top of the list with a huge 156,000 followers, overtaking the likes of V Festival (133,000), T in the Park (92,000), Glastonbury (90,000), Leeds (25,000) and Reading (21,000). Overall Download’s Facebook community is only second in the world to the I LOVE TECHNO event in Belgium.