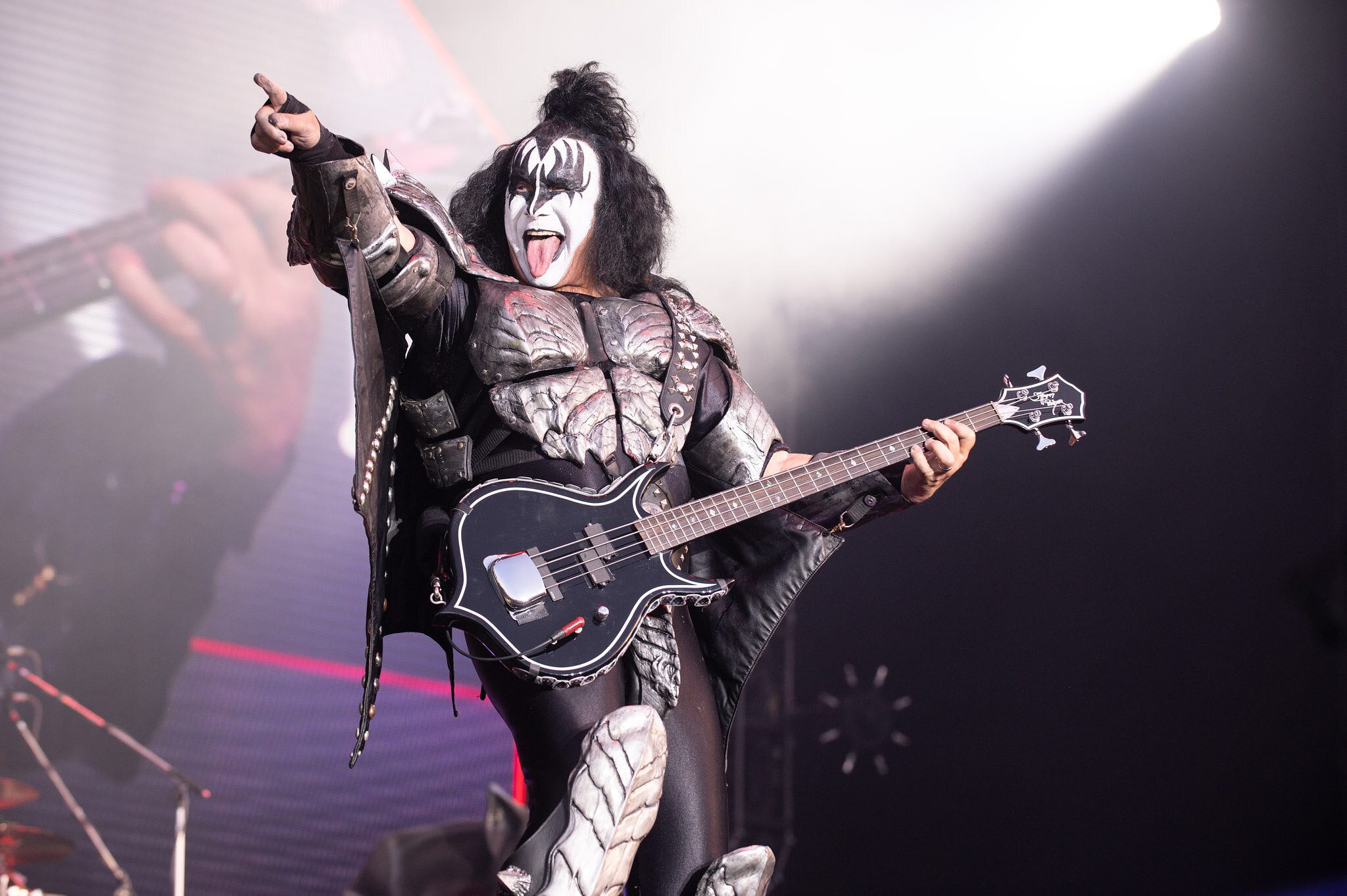 The stage is draped with an enormous KISS banner, the sides flanked with KISS ARMY insignias, and the roof a hive of ring shaped lighting like something from sci-fi. Giant inflatable metallic effigies of the band members stand either side of the stage, blowing in the wind threatening to squash the puny worshippers below. As a tape begins to roll on the screens, of the band making their way through dressing rooms and corridors to get to the stage, I can’t help but giggle. We’re in a field, miles from anything solid, with only tents and tour buses back there. It’s all part of the KISS schtick though isn’t it.

“You wanted the best, you got the best!” yells Paul Stanley, aka The Starchild as a rain of sparkly pyro falls from the centre of the stage and the banner is dropped. As usual, they are dressed to the nines in, well, quite possibly bigger than nine-inch platform shoes and their signature shiny glam get-up – and there’s a part of me watching this, that is just a bit sad that nothing comes after this. We won’t witness this level of ridiculousness again, it’s an ending era. KISS are known for keeping it strictly performance. They have a script and they rarely step outside of it, which is professional I guess, if a little wooden sometimes. “This song is about putting something in your mouth…” comes before they drop into ‘Lick It Up’ but it’s the same sentence we heard last time we saw them here. I’m not sure whether I enjoy this from a nostalgia perspective – like re-watching your favourite movie when you feel down – or if I wish they’d break character just once, for this one final time.

‘Calling Dr Love’ is followed by ‘Tears Are Falling’ and then the more recent ‘Psycho Circus’ pulls up to a long drum solo from The Cat, who is raised up onto a giant platform. Presumably giving the other band members a much needed breather. I don’t hate it, it isn’t obscenely long… but the following instrumental really is. The solo is another thing from an older time, new bands don’t do it, or it’s a few seconds while someone grabs a drink. Another nail in the coffin of what it meant to be a headliner.

Luckily the band put on a great show regardless, Gene Simmons bleeding from the mouth whilst flapping his monumentally long tongue is an image burned into the rock retina for life. Jamming his iconic axe shaped bass whilst high up on a platform amongst the mysterons covered in images of his own face… you can’t get more Gene than that really.

“It’s the last time we’re gonna be together… and because it’s the last time, I’m gonna come out there and be with you. But you have to invite me… count to three and say my name…” calls Stanley, despite the fact that this is precisely the same way it went down the last time they played here, which obviously many of the fans remember all to well. Regardless, it is really fun to see him whizz from the stage to the sound tent on a circus ring zip wire to play ‘Love Gun’, and the epic ‘I Was Made For Lovin’ You’, amongst the sparkly light of a giant projected disco ball.

Closing out with three song encore, the end finally comes with ‘Rock and Roll All Nite’. Big inflatable KISS branded beach balls are thrown into the crowd, ticker tape explosions go off, and fireworks erupt from the top of the stage as they lament “We’re gonna miss you so much, we bow to you. It’s so special every time we come here”. Now, plenty of bands have said it’s their ‘final show’ before (cough, Aerosmith, cough Black Sabbath). KISS have been one of them… over 19 times according to Steve Tyler. This time though, it really does seem like they’re done. Some of the vibrancy was missing, it was too rehearsed.

It’s testimony to their skill as musicians and performers that the show was still great, and I will be forever sad that my child won’t get to remember seeing one of, if not the most iconic bands in the world, but maybe it is time to open the gates for new things. KISS have done thousands of gigs, sold millions of records and have the weirdest and most diverse collection of merch on this earth (KISS condoms anyone?) so… fair play to them. I’m glad I was here for the last show… probably.