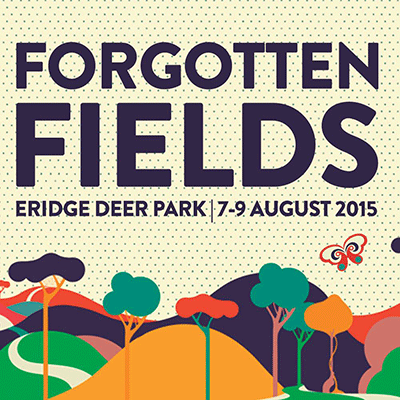 Last year’s sold out debut year provided attendees with a weekend of entertainment from start to finish, all under the blossoming Sussex sunshine. Promising yet another year of sensational music, wondrous attractions and a plethora of activities for the whole family, Forgotten Fields will once again stand as the definitive British festival experience, combining the picturesque landscapes of East Sussex’s Eridge Park with an even bigger lineup than before all within the intimate atmosphere that made last year’s event such a highlight.

With headliners Suede, Kodaline and Dizzee Rascal already announced alongside a huge supporting lineup including Kelis, Maximo Park, Jack Savoretti and Sugarhill Gang now even more names have been added to the second year of the annual event.

With their long-awaited debut album now on the shelves, Eliza and the Bear are surely set for a stratospheric rise. Songs like ‘It Gets Cold’ and ‘Lion’s Heart’ are festival ready anthems and their set on the main stage is not to be missed. From humble beginnings, Moose Blood have gone from DIY demos to stints on the Vans Warped Tour in the states and sold out headline tours in the UK. These Canterbury based melodic rockers are one of British alternative music’s brightest hopes and with new album Blush coming this summer, the only way is up for this impassioned four piece who headline the Horizons Stage. It would be an understatement to say that there was a buzz in the music industry about future star Isaac Gracie. His distinctive brand of folk has turned heads with good reason and festivalgoers can catch him on the Horizons Stage before he explodes to headliner status.

With Forgotten Fields focus on the whole festival experience and not just the music, this year sees Home Of The Unknown bring a stage of incredible activities, fun and games to Eridge Park. From Gospeloke which sees you bringing home your favourite tunes backed by a full gospel choir to Musical Bingo, dating game Blindfold Date, the Day Of The Dead themed Dance Of The Dead, quizzes from Last Man Standing and Sounds Familiar and much, much more. Home Of the Unknown will be a one-stop destination for those wanting to experience the other side of festival life!

With tickets still on sale for this year’s event get yours now!

Forgotten Fields is promoted by From The Fields, the creative minds behind Kendal Calling, Live From Jodrell Bank and Blue Dot.

ELIZA AND THE BEAR

MR B THE GENTLEMAN RHYMER

HOME OF THE UNKNOWN

DANCE OF THE DEAD

Looking past the main stages and taking revelers late into the night, the first names have been revealed for the Gypsy Disco Presents stage. The likes of Ushti Baba, Manushka, Crinkle Cuts, Fat Sandwich and many more will be playing across the weekend on one of the festival's most exciting stages, with the Gypsy Disco acting as a melting pot of musical styles with interactive theatre, burlesque and circus performers to boot.

The inaugural Forgotten Fields will also be a champion of new and upcoming talent and future stars like blog-favourites Fickle Friends and Common Tongues as well as providing a home for festival favouriteTim Peaks Diner as well as a Late Night Cinema for those looking to kick back with cult classics like The Shining, Rocky and Alien. A host of world beating cuisine and the Kendal Calling favourite Real Ale Festival will also be on site to ensure a memorable weekend is had by all!

Indie legends Razorlight will be joining the bill for a set sure to be full of smash hits and signature tunes the likes of ‘America’ and ‘Golden Touch’ as well as a solo outing for their frontman in the form of Johnny Borrell & Zazou.

Much like Kendal Calling, Forgotten Fields will be a champion of new and upcoming talent and as such future stars Fickle Friends join the lineup as well as Common Tongues, Eden Circle, Joey Fat and Raygun.

Renowned for damn fine coffee and the best cherry pie in town Tim Peaks will be on site at Forgotten Fields for a selection of special, intimate sets alongside DJ sets, Q&As and all round great vibes. The lineup includes Riding The Low, Howling Rhythm, DJ Megatune, Hathcam Social, Dhrone, Hot Vestry,Gallery Circus, Lisbon and Grasshopper as well as Northern Soul Dance Classes! 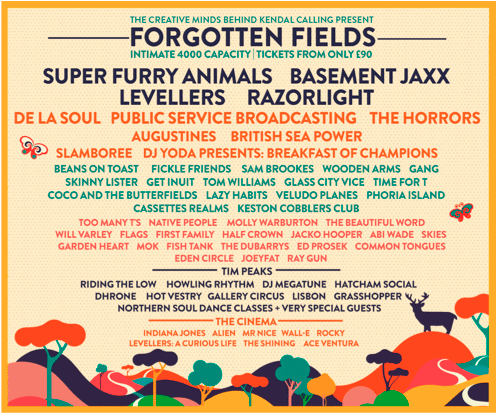 Celebrating 10 years of Kendal Calling, the Cumbrian team are launching a show in the South of England their vision that captures the heart and spirit of the original festival, and condenses it for an intimate audience of just 4000 party goers. Much like its Lake District counterpart, Forgotten Fields brings together unrivalled atmospheric charm and a quality line-up of emerging and established talent that spans the genres, all in a stunning location at a fantastic price.  Those 4000 festival fans who snap up tickets will share in the good times this beautiful little festival will offer and cherish them for years to come.

Re-formed, psychedelic rockers, Super Furry Animals return to the fray after a 6 year hiatus and bring a huge back catalogue of incredible tracks to Forgotten Fields.  The band are one of the most imaginative and powerful acts the UK has produced and there appearance is sure to be a stand out summer festival moment.

Basement Jaxx will headline the Friday night of the festival, bringing their genre-defining sound to the Main Stage, with hits like 'Where's Your Head At?', 'Romeo', 'Red Alert' and countless others set to feature.  Saturday will see the south coast’s favourite sons and festival favourites, The Levellers top the bill with a set full of folk-rock sing along anthems.

The Horrors look set to provide a suitably immersive performance from across their critically acclaimed back catalogue, hip hop pioneers De La Soul will be showing exactly why they’ve stood the test of time and Public Service Broadcasting will perform their incredible new album The Race For Space.  British Sea Power played the first ever Kendal Calling festival and fittingly perform at the inaugural Forgotten Fields alongside American indie rockers Augustines. Hip Hop turntablist and cut n’ paste maestro DJ Yoda & The Breakfast Of Champions will showcase his unique style with many more acts still to be announced across the two main stages.

Other acts performing include Skinny Lister, Sam Brookes, Coco and the Butterfields, Beans On Toast, Wooden Arms, Tom Williams, Get Inuit and many more.

Three other stages will provide a different musical focus. The Gypsy Disco will be a must-visit for fans of Ska, Balkan, Swing and immersive theatre, whilst the House Party stage will provide the perfect setting for ground breaking comedy. Arguably one of the most exciting areas of the festival, The Horizons stage will host the hottest new bands and artists, the type of acts you'll expect to see storming up the festival bills in years to come.

For fans of the finer things in life there is world-class gourmet food available on site as well as a dedicated real ale bar, and those averse to the idea of camping can enjoy a multitude of bespoke accommodation options.  There will also be extravagant site art, festival games, fancy dress frolics, boutique stalls and camp fire tales all set in the picturesque English Countryside.

Forgotten Fields is perfect for families and revellers alike, with The Prickleback Urchin Kids Area built for the younger party animals in your group and The Late Night Cinema sitting as the ideal alternative to the wealth of musical options available across the site.