Truck Festival have announced their 2020 lineup. The festival takes place at Hill Farm in Didcot, Oxfordshire on 31st July-2nd August.

Bombay Bicycle Club, The Kooks and Catfish & The Bottlemen are headlining the event with Blossoms as the Thursday night headliners.

You can buy tickets for the festival at  https://truckfestival.com/tickets/ 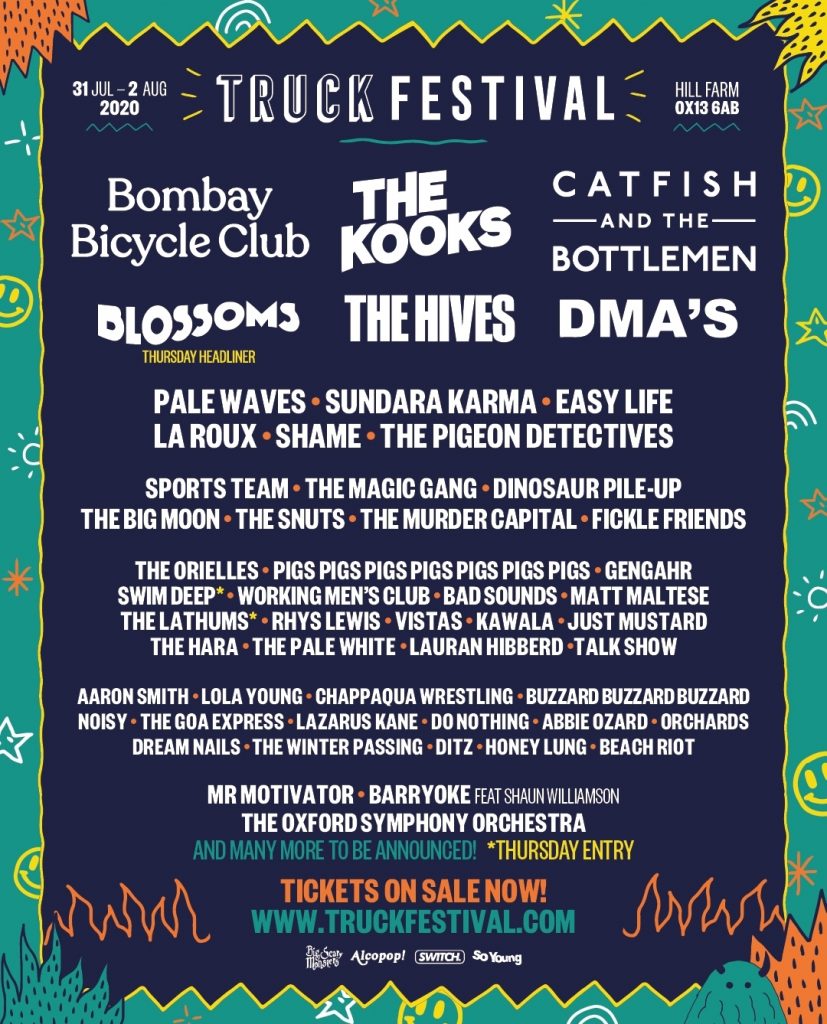 Dr. Martens is thrilled to announce an excursion into Europe with a five-city tour across five countries as the Dr. Martens #standforsomething tour rolls out for the first time into mainland Europe from 8th September.

Dr. Martens are offering music fans an opportunity to win tickets to the #standforsomething tour to watch Pulled Apart By Horses and Dinosaur Pile Up in Paris on 8th September.

The winners will also get the chance to visit DM’s original factory in Northamptonshire to make their own pair of vintage DM’s.

The tour will be headlined by one of the UK’s most exciting Indie Rock bands – PULLED APART BY HORSES –  whose new album ‘Blood’ is released on 1st September. Receiving its debut on Radio 1 as ‘the hottest record in the world’ on Zane Lowe’s show, PULLED APART BY HORSES have recently unveiled the first single from the album, called ‘Hot Squash’.

What do PULLED APART BY HORSES stand for?

‘We stand for using rock music as a joyous, cathartic release. Uniting every beautiful soul in the room. And riffs. Lots of riffs’ – Lee Vincent, Drummer.

Joining them on the tour bus is DINOSAUR PILE UP.  Founded in 2007, DPU are an English alternative rock band who broke out of the thriving Leeds rock scene of the time and instantly drew favourable comparisons to the cream of 90s US college rock. The band have released two amazing albums in ‘Growing Pains’ and ‘Nature Nurture’ and are one of the most explosive live acts around.

What Do DINOSAUR PILE UP Stand For?

"I'd love to say we stand for something profound, but really we're just three dudes that wanna kick it as hard as we can. No agenda, no egos. We've never fit in too much and that's why we stick together. Weird is good. Be your own gang." – Matt Bigland” – vocals / Guitar

The Dr. Martens #STANDFORSOMETHING tour will be hosting gigs with one simple promise – the most rousing live acts in tiny venues, giving music lovers the chance to see some of the UK’s most exciting acts up close and personal.

The tour takes in:

The Dr. Martens #STANDFORSOMETHING bus will also announce with a special local guest band at each leg to complete the line-up. There will also be opportunities for local fans to meet the bands at the Dr. Martens store during the day.

Tickets on sale from 14th July at local venues.

More information on further support acts and will be made available to fans in the coming weeks. To ensure you are the first to hear, register interest at www.drmartens.com/standforsomethingtour