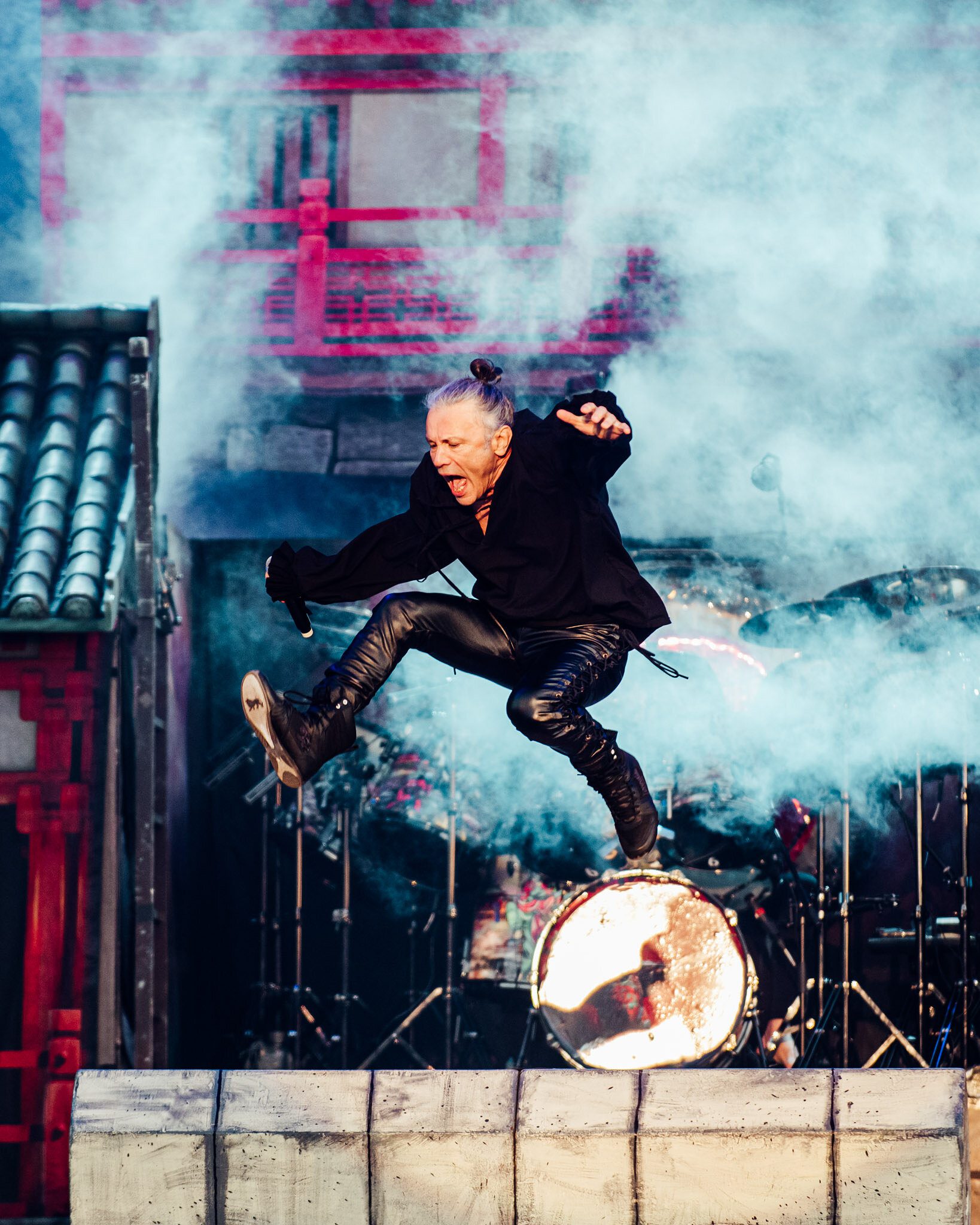 Looking at the arena tonight, it’s pretty clear there are a lot of day-ticket holders here specifically for this. It’s twice as packed as last night, people shoulder to shoulder right to the back of the hill and spilling out both sides around the sound tent. To say Iron Maiden are an institution at Donington would be putting it mildly. We’ve been waiting three years for this, let’s go.

As the traditional UFO ‘Doctor Doctor’ heralds them onto the stage, we take our first look at the set up for this ‘Legacy of The Beast’ tour, which centres on Japanese/Shinobi imagery due to their newest released ‘Senjutsu’. The stage is all green-roofed pagodas, Nikko’s brand new drum set is covered in the beautiful album artwork, and as the band take the stage we note that Bruce has gone full top-knot presumably in a nod to the theme. Rocking some almost spray-on leather pants (he does it better than Ross Geller though) Bruce is immediately and unwaveringly as brilliant as ever. If you think there’s a more iconic vocalist in metal I can’t hear you over the sound of Bruce belting the living shit out of ‘The Writing On The Wall’. You’d think after 34 years playing here, and the 7th inning as headliners, that something would eventually dip… the speed, the sound quality, the theatricality, the energy. No. Not our Iron Maiden. They are the lifeblood of this festival and all those before it on this hallowed ground, and they truly sound better than ever.

Multiple set changes are expected with Maiden for sure, but wow is it slick tonight. Using curtain structures to create background sets means they basically drop away in seconds to be replaced by another – something that really just adds to the magic of their show. This next one is a full on church, replete with stained glass windows and flaming chandeliers.

Calling out “The last three years of all our lives, has been largely fucking shit. In this field is where it fucking stops. We’re one big family, the Maiden family. We don’t care what colour, size or anything you are… you are our Blood Brothers” they drop headfirst into the anthem. Not to get too corny, but there is something so uplifting, so uniting about hearing this after the hard couple of years we’ve just been through.

Now, Bruce has always been known to be a bit… extra. But tonight he really doubles down, in a floaty veiled cape, he capers about the stage brandishing a giant disco cross for ‘The Sign of The Cross’ and then in a bonkers turn of events, trying to brandish a Ghostbusters style dual flamethrower, AND his mic beneath an enormous winged angel for ‘Flight of Icarus’.

Fear of The Dark has always been my favourite, since I saw Maiden for the very first time at the very first Download festival in 2003. My friend lifted me up from our spot 10 or so rows from the front, so that I could look across the crowd at the sea of lights. At that time it was proper lighters, not blue phone screens, and it is one of my most magical memories. Tonight, I was watching from the side, much further back, with my 2 year old daughter – doing a small cry, thinking about how grateful I am to be back here, after everything, and it was perfect.

‘Hallowed Be They Name’, ‘The Number of The Beast’ and the eponymous ‘Iron Maiden’ are just beyond reproach, it’s ridiculous how Iron Maiden manage to gut punch us every time, they just get into your bones. There’s a giant inflatable beast Eddie… everyone is singing, everyone is headbanging, everyone thinks they’re in the band too… “Scream for me Donington!” elicits the monumental roar of thousands of metal fans in their element.

The stage lights dip, but no-one moves an inch. The encore is spectacular, with Bruce admitting “Wish I was down there with you, it’s fucking cold up here” into the amazingly clear moonlight night, before donning the signature Redcoat and flag for ‘The Trooper’, and the return of Eddie for a duel.

‘The Clansman’ (another chance to yell FREEDOM into the sky) and ‘Run To The Hills’ are magnificent, but there’s nothing quite like the closing gem ‘Aces High’ complete with a fucking massive Spitfire flying, in my opinion, terrifyingly close to their heads, on stage. Bruce gives it his full force, rocking a flying cap and goggles as the band wheel around the stage delivering the most powerful, energetic performance you can imagine. They are just such pros, I genuinely don’t know what we’ll do when they finally call time. With their outro of Monty Python’s ‘Always Look on the bright side of life’, there is a collective sigh and we all begin to leave the arena. The hour plus queue to leave the car-park tells you that everyone stayed for this, what a bloody amazing night.