Tonight, for a marvelous treat – Bestival are giving us the second ever live show of the brand spanking new Diplo and Mark Ronson collab; Silk City. As the castle field fills up and an NYC back-alley set design is rolled onto the stage, the sunburnt masses are gearing up for a night of big beats and laser filled dreams.

Debut hit ‘Only Can Get Better’ proves a banging opener, supported by a barrage of lights and Diplo’s yells of “Bestival are you ready? Let’s go!”. The stage set-up is something outside of the usual DJ realm and makes for a much more visual and interesting show than just two guys pressing buttons, as they work their way through remixes of current and old hits. Projected neon street signs blink on the grey walls and faux Silk City band posters are pasted in hypnotising repetition across the big screens. Hung from the centre of the stage is an enormous disco ball, spraying flecks of light across the jumping crowd – it’s honestly one of rowdiest Bestival crowds I’ve ever seen, whether that’s down to mass sunstroke, first day drinks, or a genuine love for the music, is yet to be determined.

Shouting “We made some remixes for you tonight, just for you Bestival, hope you like them” Silk City show off with a plethora of interesting and big mixes, there’s truly something for everyone in there. A little Tori Amos anyone? A little of Kelis’ ‘Milkshake’ does indeed bring all the boys to the yard (and yes, we Brits are still largely terrible at twerking) but it’s the Dua Lipa ‘New Rules’ remix that everyone goes absolutely berserk for.

With their embroidered Silk City denim jackets (where can I get one please?), Diplo and Ronson just flow seamlessly through hit after hit, shouting such classic DJ tropes as “We’re called Silk City, are you ready to party tonight?” and “Let’s go!”. Ok, so it is a bit cheesy but that’s kind of what we’re looking for – something we can get wild to.

A little bit of Route 94, someone spinning glow poi in the crowd and “This is the first night of Bestival 2018, thanks for partying with us tonight! This is only our second gig as Silk City!” has the duo firmly established as a Bestival success, and for a bit of personal joy as 30-something, I loved the inclusion of Wamdue Project’s ‘King of my Castle’. C’mon, what a jam, am I right?

A little bit of Diplo’s own ‘Be Right There’ flows surprisingly well into Missy Elliott’s ‘Work It’ and a remix of Major Lazer’s ‘Lean On’ gives us the feels from Bestivals’ past. Further into the surprisingly funky and retro set, we’re asking each other what we’re gonna do with all the junk in our trunks (again with the poor twerking situation) followed by my new favourite version of Amy Winhouse’s ‘Valerie’.

Closing out with a second round of ‘Only Can Get Better’, Diplo calls out “Thank you for taking a chance on us tonight Bestival… we know how important it is” as the giant confetti cannon covers the arena in flickering light.

Now I know this collaboration in its infancy, obviously doesn’t have a back-catalogue of their own hits to roll through, but they have wisely created a set-list that punches hard at the absolute core point of Bestival – fun. I think they did a cracking job of it, despite some protests that it was nothing more than a glorified school disco. I have but one gripe – why where they scheduled at the same time as Bicep? 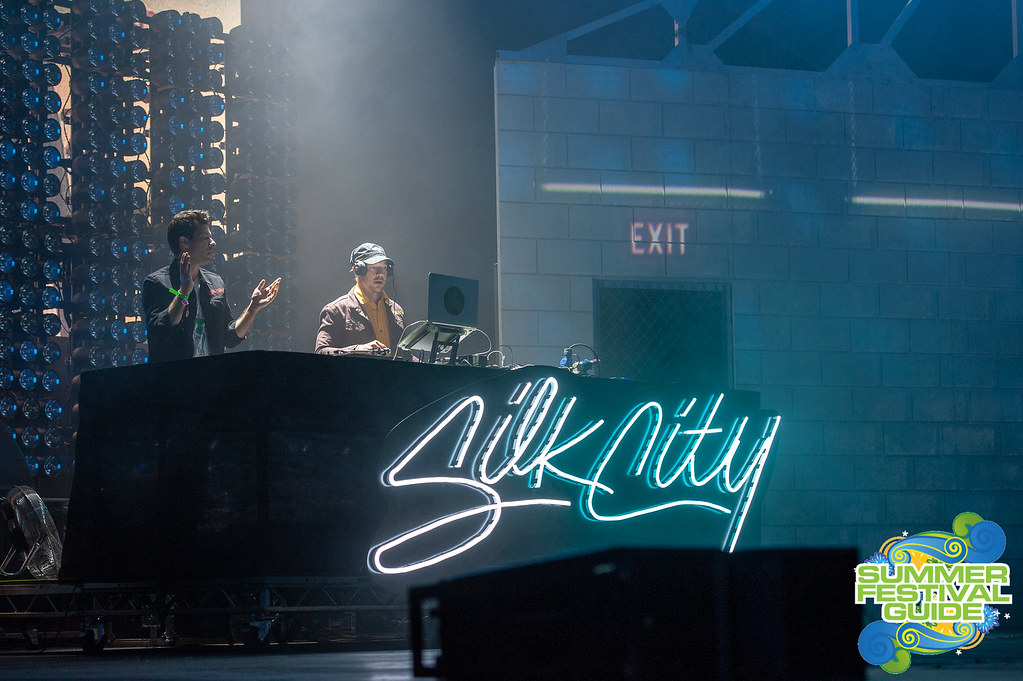