Day two of Download and arguably the most anticipated revival in rock history topping the bill tonight. Yes yes, we’ve all seen some other iteration of Guns’N’Roses… the one where Axl turned up an hour late, got bottled and slipped over… the one where everyone hated Chinese Democracy… the one where Slash just came and did his own thing and everyone completely loved it and uh, Velvet Revolver. But this is it. As close as we’re ever gonna get to a feud-less, most-members, sort-of-real G’n’f’n’R. For those of us born too late to have worn snakeskin and chains in the heyday, when leather was acceptable for every item of clothing, it’s a chance to jump into a bit of history and live the 80’s Sunset strip for a couple of hours.

In an extraordinary turn of events (which I am led to believe is mainly due to extremely fierce contract rules) the band hit the stage BANG ON TIME. It’s so incredibly unlikely and unheard of, it appears to take the crowd by surprise and a frantic legging-it-back from portaloos and food stalls ensues as the first notes of ‘It’s So Easy’ ring out.

Emerging in jeans that are more rip than denim and the inevitable plaid shirt tied around his waist, Axl’s unmistakable nasal tones signal the start of something special. Massive runway steps around the stage promise great views for even those at the back of the main stage arena, which is helpful considering this is probably the most packed it has ever been here at Donington.

Blasting through ‘Mr. Brownstone’ with hilarious backing vocals by… everyone, we’re so happy that even ‘Chinese Democracy’ itself doesn’t upset us. This is undeniably what we came here for, I mean even if Axl isn’t rocking a kilt and wellington boots, Slash looks precisely the same as he ever did (have we ever seen his actual head before?), Duff is still rocking a Prince logo on his bass, visuals of the band logo are plastered over all available screens and they sound downright incredible.

A crowd-wide Guns-and-Roses chant arises as the epic intro for ‘Welcome to the Jungle’ begins, and of course Axl milks the “you know where you are?” part. I just wish, just a little bit, that he’d have customised it for “you’re in Donington baby!” but oh well, he’s donned a different leather jacket and a hat for this so I guess that’s, interesting.

Classic Wings cover ‘Live and Let Die’ is spectacular, but honestly they kinda ruined Velvet Revolver’s ‘Slither’. It’s just not made for Axl’s rasp. ‘Rocket Queen’ in the blazing sunshine is the stuff rock and roll dreams are made of, and Axl has swapped into a fetching white leather jacket with a Crocodile Dundee-esque hat. I’m not sure I totally understand the outfit swaps to be honest, are they just all his favourites? Like a kid taking too many soft-toys to bed? They don’t seem to bear relevance to the set list, I mean if he’d come back on stage dressed as a rocket, or for that matter a queen, I’d be considerably more impressed.

Now I won’t lie, there’s a bit of a lull here in the middle. It’s a 3 hour set which seems to have been set up to include Appetizer, Siesta, Dessert, as far as planning goes. There are some absolute highlights of course – Terminator track ‘You Could Be Mine’ with a host of tron-esque graphcs is amazing and obviously any time Slash is rocking a solo you just shut up and enjoy. The Godfather theme tune ‘Speak Softly Love’ isn’t exactly ripe for the sing-along, but it is pretty spectacular.

Now clearly ‘Sweet Child O Mine’ is going to be well received no matter what, but Axl-more-changes-than-RuPaul-Rose goes wild, with er, a red bandana and tan hat combo. It’s a dream to hear live and the entire crowd is air-guitaring along with Slash, as it should be. A beautifully soulful cover of ‘Witchita Lineman’ has the younger contingent scratching their heads a bit, and Pink Floyd’s ‘Wish You Were Here’ is top notch too, but it’s now dawning on us that at least half of this 3 hour behemoth of a set isn’t actually going to be Guns n Roses songs. Go figure.

‘November Rain’ sees a raft of on stage pyro simulating rain due to the unusually dry conditions this year, which we are all super thankful for by the way, and a giant black grand piano is wheeled out, with a teeny weeny motorbike stool for Axl to sit on. It’s more than a little bit comical. Sorry. Then again I’m sure he cares not a jot, seeing as we’re treated to some up-close shots of his hands tickling the ivories, and one of them is adorned by an obscenely huge rectangular sapphire ring that looks like it could knuckle-dust you into another dimension. Slash is now up on the top gangway wailing for all he’s worth, and the skies are turning pink and blue above us, it’s so perfect I want to puke. As if that wasn’t enough, we’re treated to (yes, another cover…) Soundgarden’s ‘Black Hole Sun’ with an intro suspiciously familiar to Westworld fans in the crowd, which honestly makes me wary that Axl has actually been replaced by a host. It’s the only explanation for his turning up on time.

Snapping back to the big guns we’re treated to ‘Knockin’ on Heaven’s Door’ with Axl in a fringed jacket, and then the absolute classic ‘Night Train’ before an extremely brief pause for the encore. The signature whistle signals the intro for ‘Patience’ and Axl quips “…we’re going to play an English folk tune” before launching into a cover of The Who’s ‘The Seeker’ whilst wearing a Union Jack emblazoned hat. Finishing up with a final change into a studded leather jacket we get the big one, ‘Paradise City’. It’s everything it should be, loud, large and classic. Fireworks top off what was an incredible, if slightly lengthier than it needed to be, show. There’s no denying Guns’n’Roses were meant for Download Festival, it’s been a long time coming. 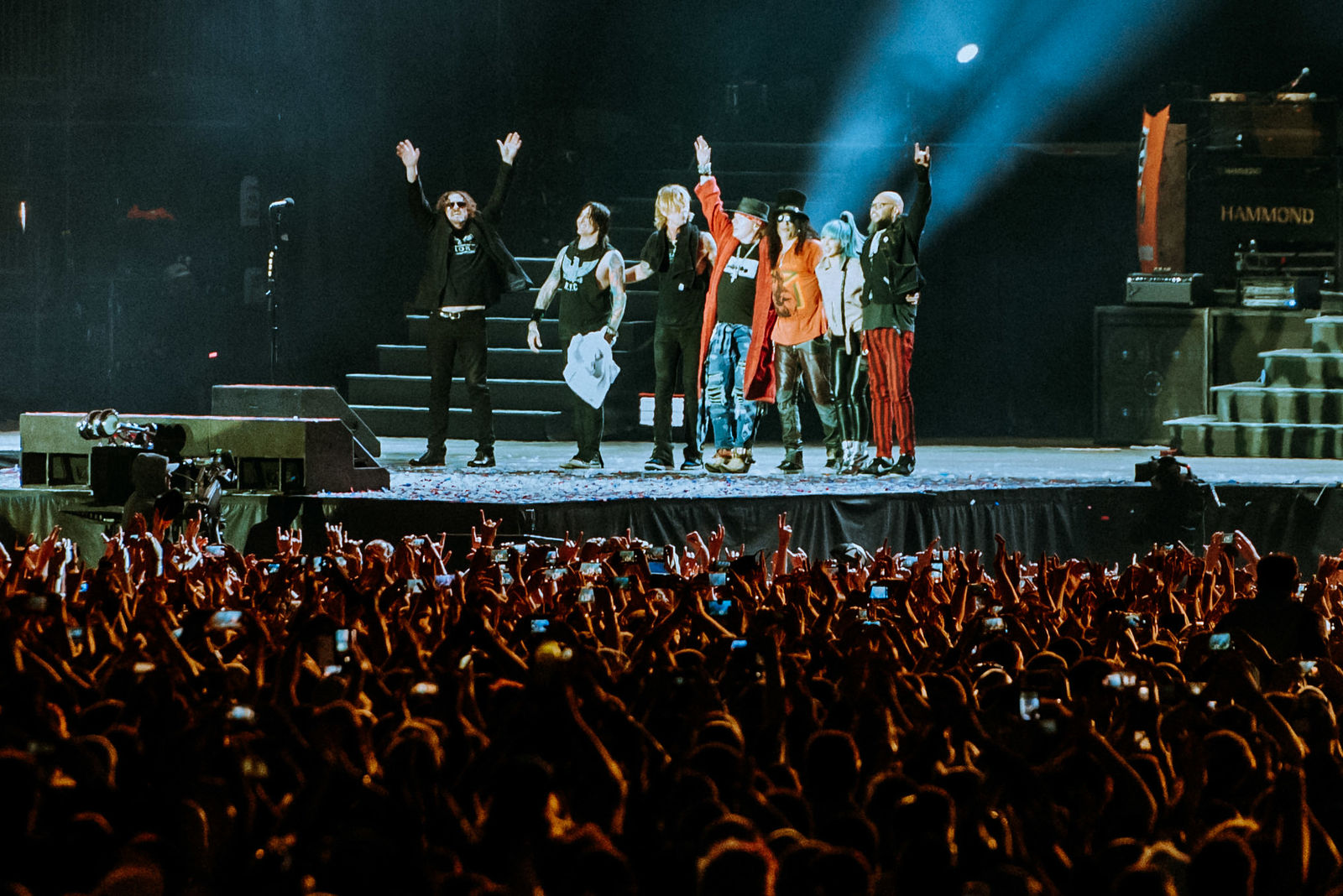