Someone said all good things must come to an end, and sadly it is the final night of Bloodstock Open Air for another year. On the plus side, tonight sees the mighty Megadeth return after headlining the festival last in 2014, this time as part of their Dystopia World Tour. The LA thrash idols fronted by Dave Mustaine, known for their political commentary and lyrics, are sure to have something to say about the current events in America unfolding this week – adding to the overwhelming anti-Trump sentiment coming from many of the bands both last year and this.

As the giant screen backdrop explodes into the Megadeth logo, the band enter with an eardrum shattering blast of pure thrash metal for ‘Hangar 18’. Again BOA have absolutely nailed the sound this year, every note is perfect and Megadeth just keep rolling through a rock-solid set. The likes of ‘The Threat is Real’ and ‘Wake Up Dead’ have the entire arena going nuts, the pit is jumping and you can’t move without being thrashed in the face by someone’s wild headbanging hair.

Backed by an absolute wall of Marshall stack amps, the band stop for nothing, not even for a giggle at the guy crowdsurfing the inflatable ducky getting unceremoniously bounced into the pit. The screen visuals are also pretty interesting and topical, with despotic world leaders and killers flipping over and over during ‘Sweating Bullets’, but it’s the incredible acoustic intro to ‘Conquer or die!’ performed by Kiko Loureiro that has us in utter awe. Bathed in orange light centre stage, Loureiro picks alongside strange disembodied hands doing the same on screen, it’s unnervingly incredible to actually be able to see what he’s doing from anywhere in the arena.

It’s the sense you get with this whole show – these are just people who are incredibly good at what they do, and there’s no stage set, costumery or amount of pyrotechnics that can come close without that level of mastery that comes with years of practice. Oh and as any good metal band should – everyone gets a turn, there’s a chance for drummer Dirk Verbeuren to do his thing from his lofty height mid-stage and everyone else takes turns at dueling guitars during ‘Poisonous Shadows’.

Finally on pause, Mustaine calls out “Good evening, are you feeling good? See I didn’t wanna waste your time tonight by talking a lot…” as the crowd jubilantly chant “Me-ga-deth” back at them. Following this he says “…they told me tonight was the biggest Bloodstock ever. Thank you for breaking that record… hopefully we'll beat that next year, and it'll get bigger and bigger and bigger” which, at least for the second half, doesn’t garner much reaction. I think there’s an unspoken hope amongst the crowd that Bloodstock remain a smaller festival, one which is well run and for the most part, avoids the trappings of the larger festivals. It’s why people come here.

Of course ‘Symphony of Destruction’ was going to be huge, but there is nothing like the wallop hearing something so iconic, so anthemic, up close and personal, in the flesh. Oh and if ever there was a more poignant time for this song, I don’t know it. The AV depict bombs exploding, guns, the American flag aflame, and a lot of fat white men sitting around with cigars laughing and to be honest it’s all a little too real right now. Heading into the encore of ‘Peace Sells’ we spot two very happy Megadeth fans in furry clothing who have a primo view of the show, I mean, if you can’t headbang to Megadeth on top of a bin, dressed as a carpet at Bloodstock… when can you?

Closing out with an insanely heavy ‘Holy Wars… The Punishment Due’, Mustaine takes one last chance to address the crowd “Drive home safe tonight… as always you’ve been awesome… and we've been Megadeth!” and with that, it’s over for another year. Megadeth absolutely brought the house down, ending BOA 2017 in a blaze of glory. 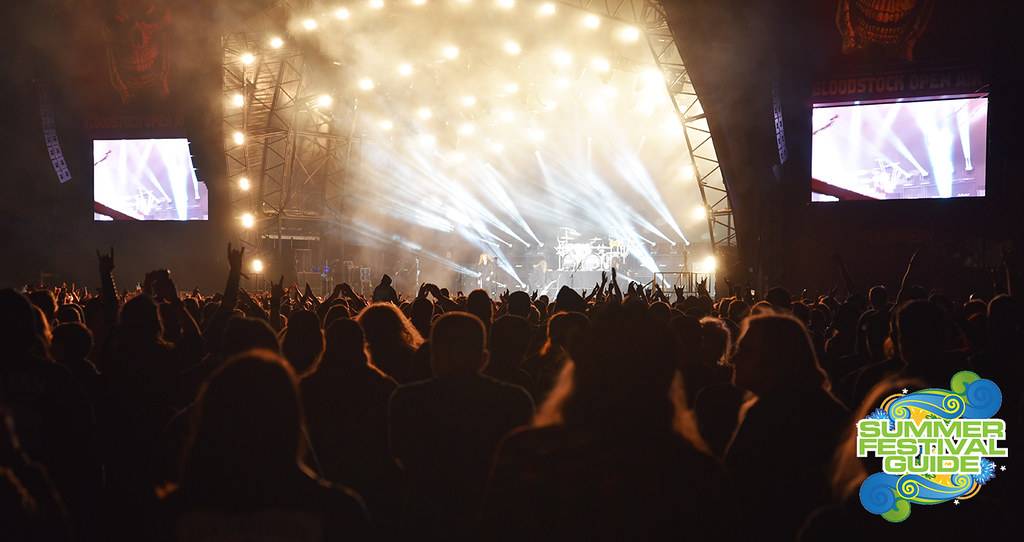 All photographs © A. Hyams – Do not use without permission