It’s Friday night, we’re all wearing black and the arena smells strongly of rum and beer. Let’s do this.

Twice now, the Swedish vikings have hit the second-from-top billing at Bloodstock Open Air and tonight they finally get to bring their full fire-fuelled show to the hallowed ground of Catton Park. There is nothing about the stage set that suggests Amon Amarth intend anything less than a completely immersive show tonight, with the drum kit set atop a giant viking helmet, sporting two insanely huge upturned horns. It’s Iron Maiden levels of crazy. 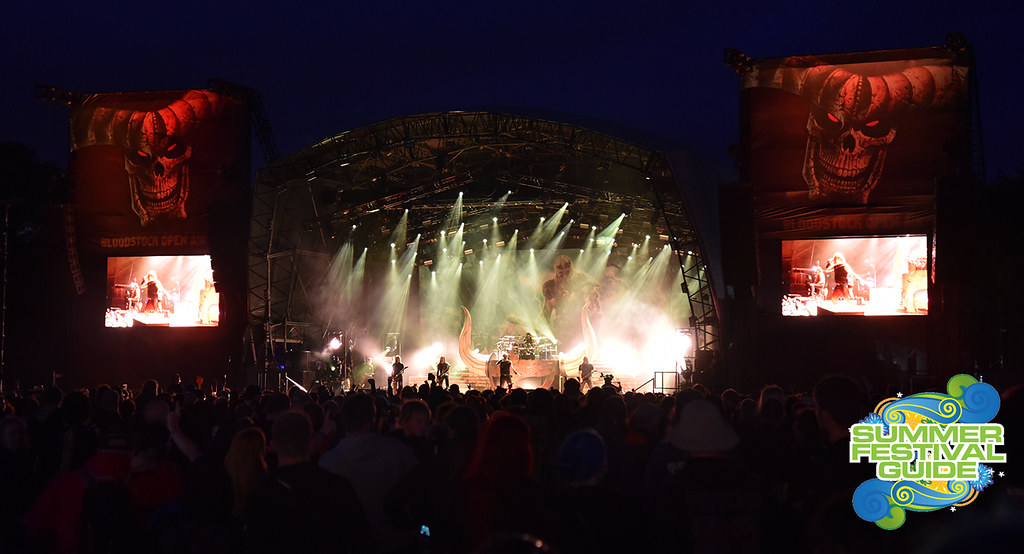 Burning straight out with ‘The Pursuit of Vikings’ and some very synchronised headbanging, they draw the remaining stragglers from around the arena into their fold with their melodic yet heavy sound. Yelling out “Bloodstock! Welcome to our little Viking feast… for the first time we are headlining this motherfucker… are you ready to feast like Vikings tonight?” they throw themselves headlong into ‘First Kill’ and the crowd follows suit, there are a lot of people with incredibly long hair here, and they are windmilling it with wild abandon.

Joined on stage by a couple of battling vikings in full gear, flanked by an obscene amount of pyrotechnics in the form of fire cannons (which can be felt even at the back of the arena, they’re damn hot!) as well as an almost constant blast of smoke between bursts of strobe lighting, Amon Amarth are absolutely killing it. They are hands down one of the best headliners BOA have ever booked, and it’s been a long time coming. 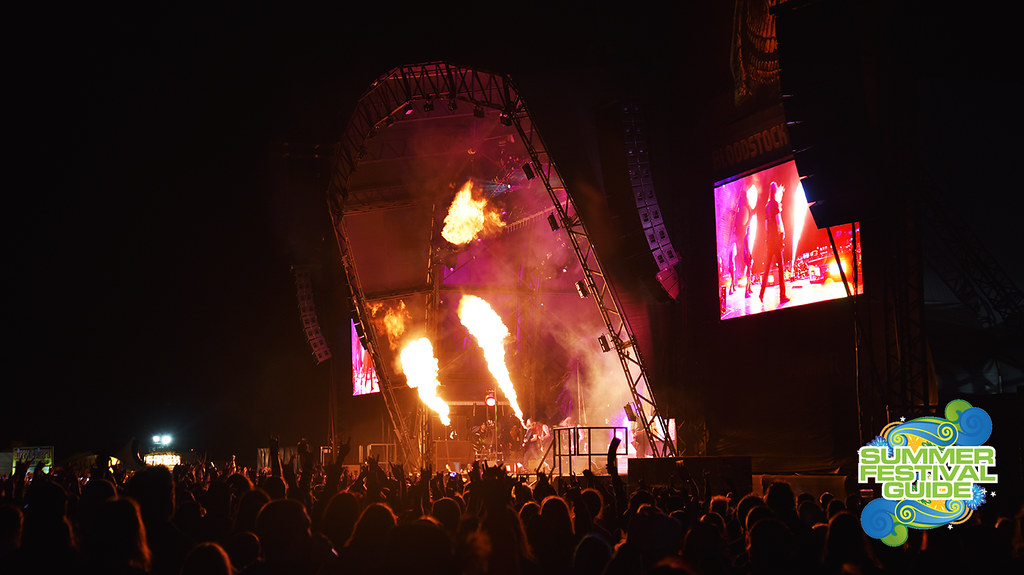 Vocalist Johan Hegg yells out “You guys are loud! I’m not surprised though… this is the true metal country” and pushes the pride button inside every British metalhead, we just bloody love being told we’re the best at this – especially as for many, Bloodstock is the only time of year you get to be surrounded by kindred spirits. Following up with a tradition for the band which was apparently started here, he calls for the crowd to sit down “…and show the world how it’s done… this is Viking fucking rowing!”. Now if there’s one other thing the British love, it’s the chance to re-run some cheesy childhood memories, and this bares an extraordinary similarity to Oops Upside Ya Head at school discos… Aaaanyway, a huge portion of the arena is given over to seated metallers pretending to row-row-row their boats. We are such a strange country.

‘Deciever of the Gods’ and ‘Destroyer of the Universe’ go down a storm with the already hyped up crowd, and a Loki-esque character takes to the stage to stomp about a bit, but mainly he seems to be getting in everyone’s way. Being very literal with their song-to-décor ratio is a good thing in my book, I appreciated the face melting amount of fire during ‘Death in Fire’ and the torched rune during ‘Runes to My Memory’, I mean you really know what they’re trying to convey. Vikings like fire. Taking to the front of the stage armed with an array of drinking horns, the band take a moment to toast their main stage debut “We want to take this opportunity to raise our horns to you… skol! Or cheers!” eliciting a huge roar from a crowd who in turn are thrusting their own drinking horns high into the air. 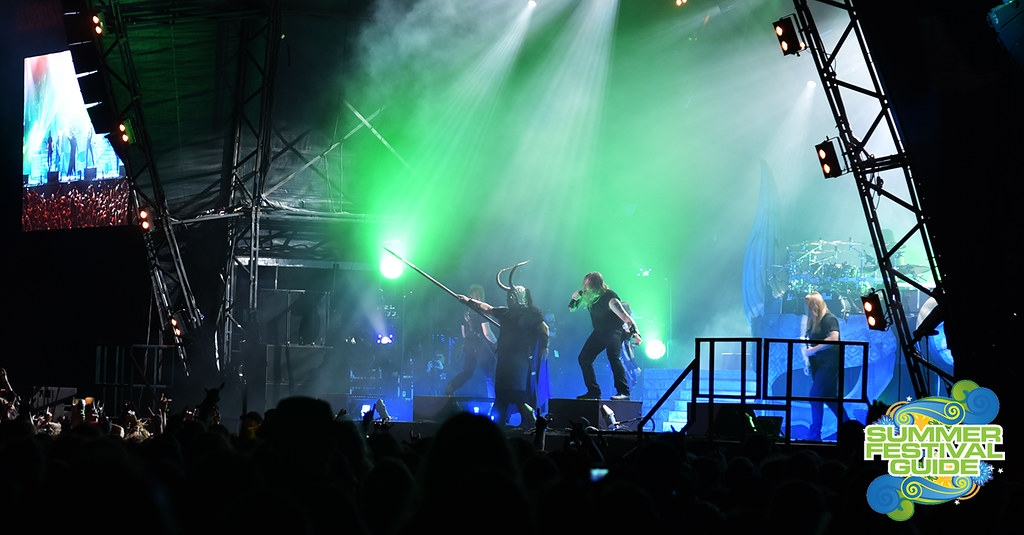 ‘Guardians of Asgaard’ is bone shatteringly heavy and the sound quality here tonight is absolutely top-notch, but it’s finale ‘Twilight of the Thunder God’ that rocks us to our core. During a simulated (thankfully, no rain here) thunderstorm with lightning and a rainy backdrop, a giant serpent/wyrm from the album cover, is wheeled on stage and it’s just one of the most amazing sets we have ever seen here at Bloodstock. Targaryens would feel right at home. As they play the song out and call “Stay safe, row hard, and most importantly, raise your horns!” there’s a sense the crowd here would have easily gone in for two more hours of Amon Amarth, and that’s really what a headliner should be, right? A vaccum where nothing else matters outside of the moment. I reckon they achieved it.

All photographs © A. Hyams – Do not use without permission.