OsFest is now in its 3rd year, with previous acts like Goldie Looking Chain, Tinnie Tempah, Razorlight and many more this up and coming festival always delivers. This year for May bank holiday we had another great line up. JLS were to headline along with James Arthur, The Enemy, Lawson, The Pigeon Detectives, Lucy Spraggan and many more to come.

*With short notice James Arthur had to drop out with commitments made in the US which regrettably meant he couldn’t be at Osfest this year. To fill the main stage spotlights  Britain’s got talent finalists  – The Lovable Rogues took up the arena. Fridays DJ set from Monki Radio 1’s 1XTRA DJ set the crowd right from the start. The crowd at this point was only small due to most people arriving Saturday, as with the crowds the weather was the same. When waking up Saturday I was amazed to see perfect blue sky and sunshine! unlike previous years where the weather had dominated this set up the weekend perfectly and added so much atmosphere to the main arena.

Leading to Saturdays main acts I was delighted to see TICH and A*M*E perform who gave a great performance and with the amazing lighting setup on the main stage. This gave me the opportunity to snap away and get some really amazing images. With the crowd starting to really build heading into the afternoon, along with the drinks flowing and the sounds of the Mega Spin and bumper cars in the background Wiley took the stage. With Wiley’s great line up of songs such as ‘Rolex‘ and ‘Can You Hear Me?‘ the crowd were so reactive to his words, jumping down from the stage at one point to meet his fans security had to pull him back from being eaten by the front rows of the crowd. The side of the area had a cut-out section for people to walk in and out, near the side of the main stage and the with the sun starting to set projected beams of orange and amber light hit the crowds hands as they sang along to Wiley’s chants; This really highlighted the incredible success of this festival and was a very euphoric experience!

As the sun was about to set, the next performance was from Lawson, a true success in the music industry over the past few years their fan and crowd numbers have shot up with their success and great vocals performed by Andy Brown. Singing songs from their very popular  2012 album Chapman Square, the crowds were at their peak! My favorite song performed by them I think had to be their Swedish House Mafia cover of ‘Don’t You Worry Child’ the crowds reacting singing along with them Andy really pushed the crowd to sing their hearts out. 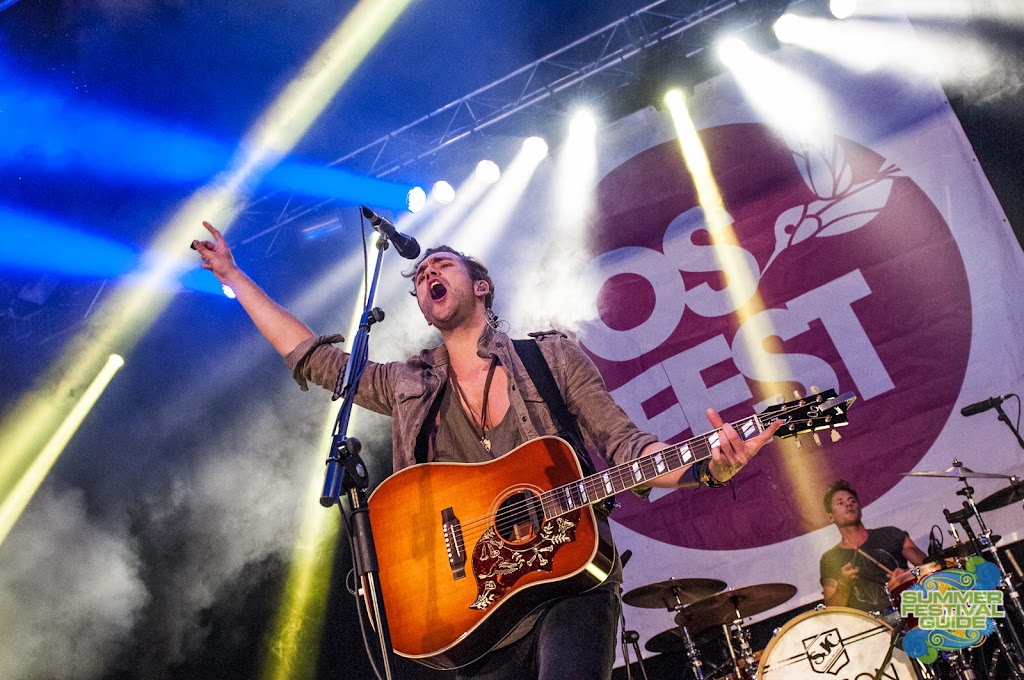 With a short break it was time for the undoubtably the crowds number one act at this point, JLS had arrived and were backstage waiting to come on. Peoples camera phones were out and the crowd from the back of the arena was a sea of mobile LCD screens. I think I even saw an iPad involved! Starting their performance with ‘Beat Again’ you could hear the younger girls screaming! I thought that Wiley’s performance would be hard to beat due to his off stage performance and energy with the crowds, I think by the end of JLS performance it was a level pegging. The lights from the main stage were being hammered and the strobes and house lights were being switched around to illuminate the crowds. I know many of the younger crowds had gone to sleep easy that night after having such an exciting hot day in Oswestry.

Another sunny day to come at OsFest 2013 acts the Enemy, Pigeon Detectives, The Lovable Rogues and Lucy Spraggan to play main stage along with many more, with the sun shining the main arena area was the only shade the amusements surrounding the main tent became busy once again. Lucy Spraggan was a great favorite of mine from the  Sunday at OsFest, she had risen from the Live and unsigned category at the age of 20 to being a very good competitor in X-Factor and due to illness she didn’t get chance to perform all the way through the show as she was forced to quit the X-Factor due to illness.

She references all of her songs from real world experiences and it was like listening to her telling multiple stories as she sang, her song about Jeremy Kyle as she wakes up was a great one for me, the crowds again loving her great on stage performance of singing and story telling.

With the Lovable Rogues performance, the crowd really started to get involved and more and more people from the surrounding amusements started to make their way into the tent area. Performing their great new single ‘What a Night’ the main arena was pounding! The speakers and acoustics from the main tent were really impressive! wherever you were inside the tent you got a great sound and even form the back of the crowd you could still enjoy the performance of any of the acts due to the high stage and great lighting setup, perfect for the little ones who found them selves being hoisted onto their parents shoulders to get the perfect view. I saw a grown women on someones shoulders who wanted an even better view from the back of the arena area.

Though the day different acts performing at OsFest had been interviewing in the Specialized Media Tent and were scattered around the VIP area for those with the right wrist bands was a perfect way to see some of the acts up close. I saw The Pigeon Detectives interviewing along with The Enemy and Lewis Watson who performed in between Lucy Spraggan and The Lovable Rogues.

Heading towards the close of the festival this year, we were just waiting on The Pigeon Detectives and The Enemy I have to say OsFest ended on such a high after watching The Pigeon Detectives perform. The lead singer for The Detectives Matt Bowman had more energy and control of the crowd than I had ever seen from an artist on stage before! His command of the crowd due to his energy was presented as pure respect from the crowds in the main arena. He was poring water of his head while performing ‘Im Not Sorry’ from their 2007 album ‘Wait For Me’ I think they set the mark for the entire festival at that point. Matt was squirting water all over the front of the crowd, jumping from the drum kits and bouncing around in the press pit! I think these guys should have been last on at OsFest as it was very difficult for The Enemy to top such an energetic performance. They did very well and I really enjoyed their performance! I got some great shots and while watching them interview they really seemed to be a really down to earth group of guys. While performing they played my all time favorite cover ‘sit down’ and ‘Away From Here’ They were great to see live and some of their guitar work was awesome! I remember being below Tom Clark (Lead Singer) as he thrust his guitar up with one hand and slammed down a chord on a few areas of the stage. 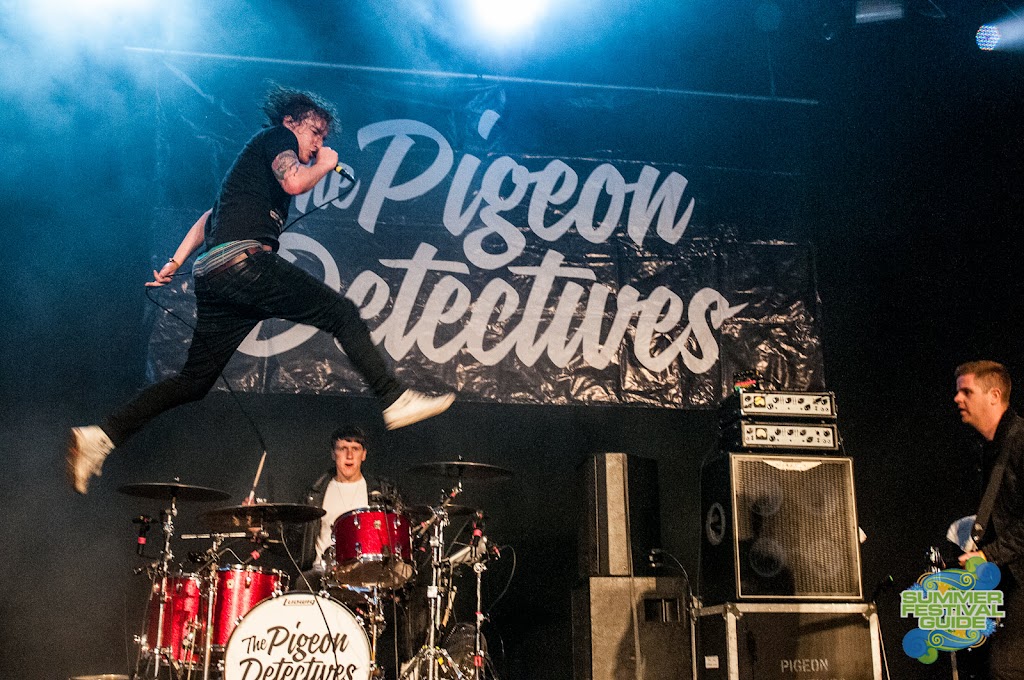 Overall I had a great great time this year and will be heading back up next year with no  doubt in my mind. With the great reception from all staff, security and for the line up this year. Im hoping with the continued publicity of this little (Big) festival they will grow and grow on the map.