FacebookTweet
With just 5 weeks to go until T in the Park opens its gates to tens of thousands of Thursday campers and the biggest weekend of the summer gets underway, festival organisers DF Concerts and founding partner Tennent’s Lager have added yet more hotly tipped, under the radar acts to the 20th year bill. The Recovery!, Roman Nose, The LaFontaines, Jim Lockey & the Solemn Sun, PAWS, Baby Strange, Fat Goth, Discopolis, Departures, Saint Max and the Fanatics, Animal Noise, Astroid Boys, Story Books, Propellers, The Adelines, Emily Burns, Model Aeroplanes, Big Beat Bronson, Steel Trees and The Lake Poets will all take to the BBC Introducing stage over the weekend of 12th – 14th July.
Glasgow five-piece The Recovery! fuse noise and attitude to create an energetic, heavy rock ‘n’ roll sound. Bringing some dark electro beats to the festival this year are Roman Nose, who have supported the likes of The Glitch Mob and 2manydjs. Combining Hip-Hop, Rock and Pop into one genre mash-up of brilliant noise, The LaFontaines have just played their biggest sell-out headline show to date at Glasgow’s Classic Grand and have supported the likes of Example and Twin Atlantic, plus their track Under The Storm featured as the soundtrack to T in the Park’s 20th year line-up announcement video.
Jim Lockey & the Solemn Sun played a rapturously received set at SXSW and have smashed through two UK headline tours. PAWS’ punchy pop punk tracks took off in 2010, and their infectious sound was showcased on their debut LP Cokefloat! in 2012.
Baby Strange have been the talk of 2013, storming the stage and packing out the venues around their home-town of Glasgow including their appearance at Tenement Trail in March. Dundee’s Fat Goth recently released their second album Stud to a slew of outstanding reviews from the likes of Rock Sound, Kerrang! and Drowned in Sound. Edinburgh electronic four-piece Discopolis made their T in the Park debut on the T Break Stage in 2011, and were hailed by NME as one of the top new bands to watch shortly after. With two EP’s and studio albums under their belt, Glasgow band Departures have developed a fanbase for their melodic hard core rock.
Purveyors of offbeat, catchy pop gems, Saint Max and the Fanatics have won support from luminaries including Steve Lamacq and Vic Galloway since forming a year ago. Essex-based trio Animal Noise create energetic acoustic dance music with fast guitar picking and soulful vocals. Cardiff’s grime collective Astroid Boys impressively entwine hard core beats and impressive rapping with street-wise, captivating lyrics. Story Books released their debut EP Too Much a Hunter in May on Communion, the label co-founded by Ben Lovett from Friday headliners Mumford & Sons.
Propellers infuse their classic indie tracks with a disco-inspired twist, and are set to share the line-up with the likes of Jake Bugg and Tom Odell at The Rolling Stones’ forthcoming Hyde Park gig. The Adelines are a guitar-driven quartet who have captured the attention of fans and industry alike with their jangly reverb-guitars and pop sensibilities. Emily Burns oozes dreamy pop with her acoustic sound and Dundee’s Model Aeroplanes are set to own the stage with their energetic indie rock music.
Big Beat Bronson is Newcastle’s answer to a hip-hop super-group, with stunning musical rhymes and vocals. Steel Trees showcase themselves as ‘punk misfits’ with their loud and proud grunge music. The Lake Poets put on an enchanting show with beautiful songs centered around lead Martin’s acoustic guitar.
Over 85,000 festival-goers per day will descend on Kinross over 12th – 14th July for the 20th year of T in the Park, which will feature performances by some of the hottest acts on the planet, including headliners Mumford & Sons, Rihanna and The Killers, plus The Script, Stereophonics, Beady Eye, Kraftwerk, alt-J, Foals, The Lumineers, Yeah Yeah Yeahs, Phoenix, My Bloody Valentine, Two Door Cinema Club, The Courteeners, Frightened Rabbit, Jake Bugg, Of Monsters and Men, Twin Atlantic, Editors, Hurts, Travis, Frank Turner, The View, Noah and the Whale, Ocean Colour Scene, Haim, Imagine Dragons, The Fratellis, Johnny Marr, James Skelly & the Intenders, Villagers, Local Natives, Chvrches, Tribes, FIDLAR, Palma Violets, Kodaline, The 1975, Peace, The Strypes, British Sea Power, The Heavy, Deap Vally, Swim Deep, Trash Talk, Brooke Candy,  The Virginmarys and Josephine, plus many more still to be announced. 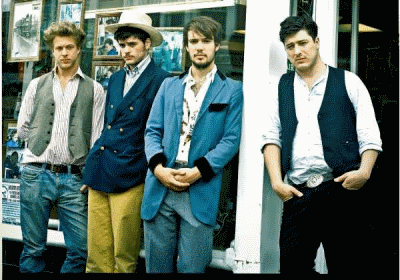 Fans can guarantee they’re part of the 20th year of T in the Park by getting their tickets now from www.tinthepark.com or www.ticketmaster.co.uk or by calling 08444 999 990. Experience the 20th year of T in the Park and join 85,000 music lovers per day as part of the greatest audience in the world this July. Boutique camping options in The Residence are also available for those looking for luxury living at T in the Park – check out www.theresidenceexperience.co.uk
For regular T in the Park news, check out www.facebook.com/tinthepark and follow us on Twitter @Tinthepark
FacebookTweet