Following the huge announcement that revealed over 100 names from We Are FSTVL’s 2015 edition, the twice award winning music event has kicked off the year with even more names added to the line-up. Returning to the ‘Field of Dreams’ in Upminster, Essex on Saturday 30th and Sunday 31st May 2015, We Are FSTVL welcomesMasters at Work, Heidi, Route 94, Dusky and many more – who will join the likes of Carl Cox, Loco Dice, Sven Väth, Jamie Jones, Hannah Wants, Seth Troxler and Jackmaster – plus two further stage hosts from legendary house music promoters Paravana and Clockwork Orange.

Headlining Defected’s ‘Very Big Top’ on Saturday 30th May is the house-garage production and remix duo "Little" Louie Vega and Kenny "Dope" Gonzalez, who together as Masters of Work perfectly join the dots between the latest and greatest innovators of the underground scene. Jackathon’s leading lady Heidi is also set to bring her signature brand of fiery house and techno to Sunday’s Main Stage, joined by house chart-topper Route 94, whose soulful take on house for ‘My Love’ quickly became a surefire festival anthem of 2014.

Also announced are London based duo Dusky, who will be on hand to deliver their very own selection of genre-bending productions at MK’s Area 10 stage on Sunday 31st May, with DJ S.K.T also representing the bass-ier side of the house spectrum alongside Beckwith and Disciples –the London-based trio behind killer single ‘They Don’t Know’.

Returning to We Are FSTVL for the third year running are promoters Paravana. With their unique imagination drawing upon the tranquil surroundings of the Cambodian island of Bamboo. Famed for a series of bass-flavoured releases, the Bristol based collective will provide the latest in emerging, club-centric sounds, and welcome Max Chapman, Senzala, and garage-producer trio Panda – providing an idyllic soundtrack for Sunday’sField of Dreams.

In a UK festival exclusive, legendary promoters Clockwork Orange will also host their very own arena at We Are FSTVL on Saturday 30th May. Having launched in London back in 1993, Clockwork Orange will celebrate their 25thanniversary with a line-up that fully explores the origins of UK house, kicking things off with a b2b set between head promoter Danny Clockwork and Keith Mack. Co-creator Andy Manston will also feature, with 90s key player Tall Paul topping the bill alongside Brandon Block, Alex P, Trevor Fung, Tristan Ingram, 2 Good Souls and Tony Grimley. 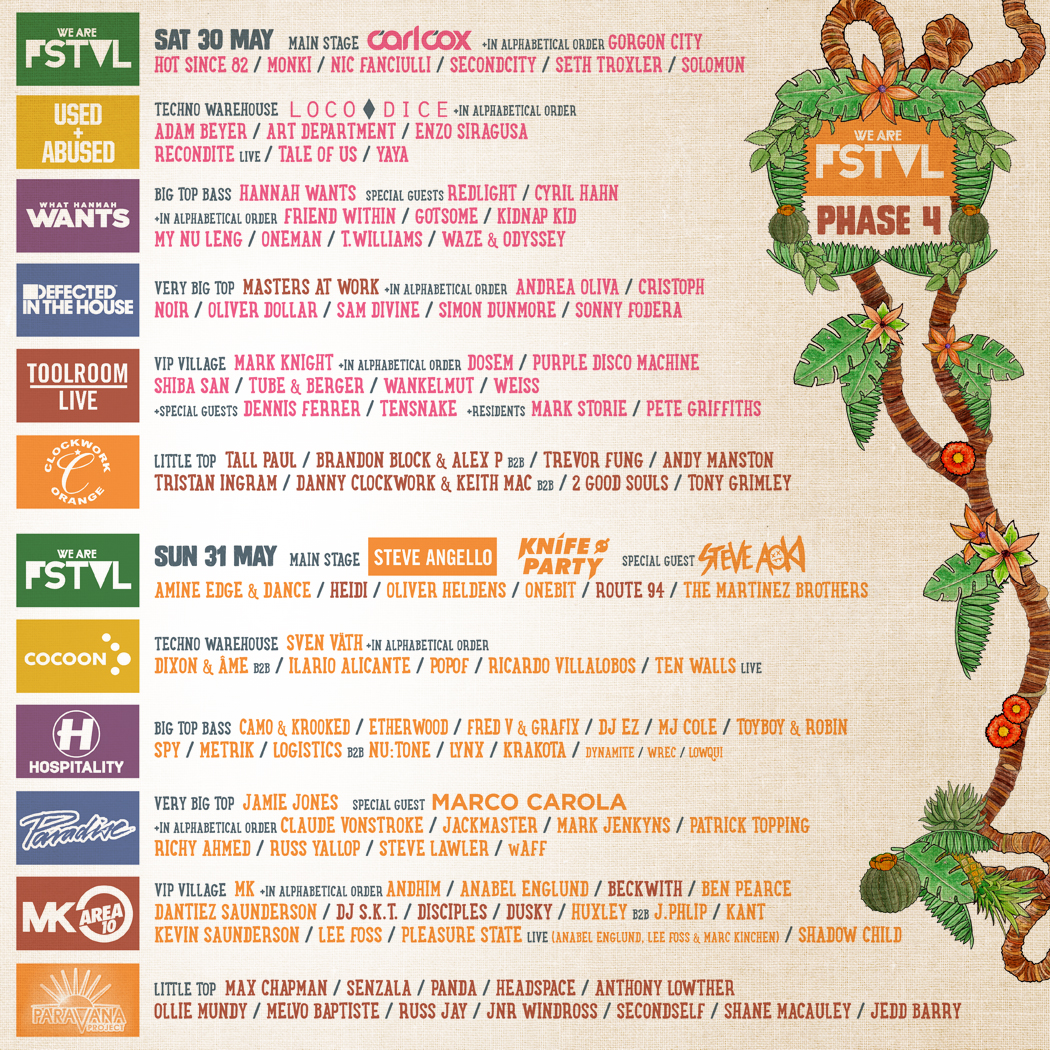