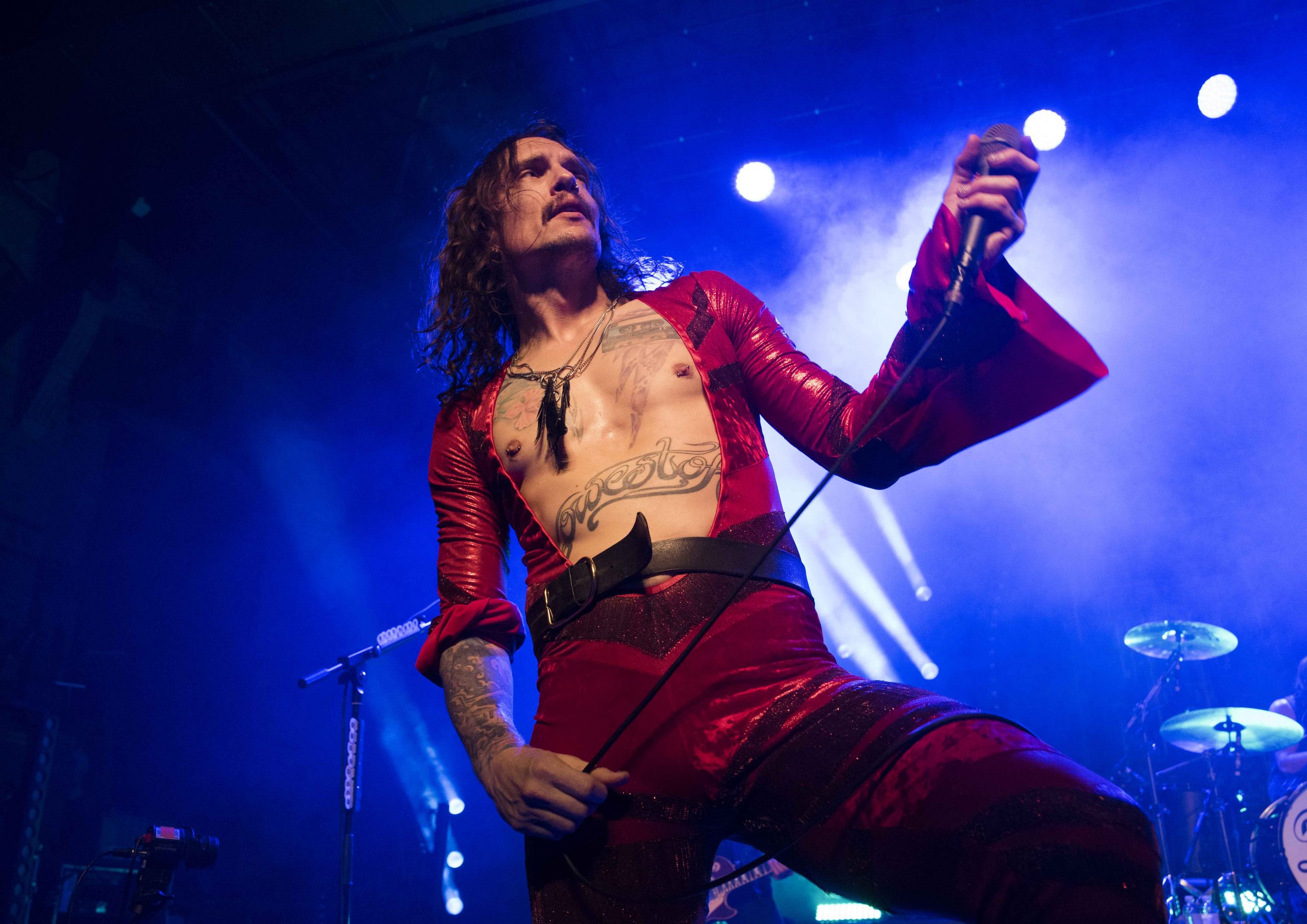 On Friday 6th December in the remarkable city of Cambridge, we waited in anticipation outside the doors of the Corn Exchange. A fantastic venue to which has played host to many events including music artists, theatre productions, comedians and more. The reason why we were there was to attend another awesome event The Darkness live!
The Darkness are an alternative rock band originally from Lowestoft. The act formed back in the year 2000. The band consists of musicians Justin Hawkins on vocals and lead guitar, Dan Hawkins on guitar, Frankie Poullain on bass and last but not least Rufus Tiger Taylor on drums and percussion.

Upon entering the venue, our photographer and I came into the foyer, which inclued a bar at either side and also a merch stall selling products for both The Darkness and also the evening’s support act Rews. The venue filled up fairly quickly with eager and excited fans.

First, to take to the stage, were Rews, a female fronted alt/rock band that formed in Northern Ireland back in 2014. Shauna Tohill, Ele Lucas and Scott Hislop really got the night off to an energetic start! Their first realeased albums were titled ‘Pyro’ and ‘Your Tears’. The band were so full of energy filling the stage with jump kicks and lots of dance action. They sang a total of eight hits, including ‘Shake Shake’, ‘Can You Feel It?’ and their latest single ‘Birdsong’. Their music had a great variation in style, so there was something for everyone, including a mix from heavier rock to softer more ballad like tones. A great all rounder. The band showed great interaction with the crowd and you could tell the audience really loved their musical styles. Their new album is due for release in 2020, so make sure to be on the look out for that!

After a short interval, the band members of the night’s headline act, The Darkness entered wearing white suits and Justin Hawkins donning his expected flamboyant and show stopping attire. The band had performed two sets on the night in which they played the whole of their lastest album ‘Easter Is Cancelled’ and then the second half of their show featured their older well known hits. The audience was a wide range of ages, from older generations, to younger ones. Their was one young lad in the crowd who looked only around six years old, who was clearly having the time of his life, sitting on his parent’s shoulders wearing a sleeveless denim jacket with band patches on. His parents must be so proud!

There were 3 arches decorated with lights at the back of the stage in which cartoon clips were playing during the band’s set, this included cows in a field and also characters from the James Cameron’s infamous film Titanic. On the last song of the first half the band all except Justin left the stage. Justin was left on stage with just an acoustic guitar in which he sung ‘We Are The Guitar Men’.

After another short break, Frankie came back on stage with a cow bell and got the crowd to clap along with the beat of the bell. After a quick costume change the band returned to the stage once more. Justin wore a festive red jumpsuit with the front uncovered showing his tattoos and all kinds of nipple.

Justin was brilliant at getting the crowd involved with the show. He was getting them to try and reach the same pitches that he can even chanting out “F**k’. The whole room filled with amusement and ended up singing throughout the whole performance. When the initial bars of their infamous 2003 hit ‘I Believe In A Thing Called Love’ were played everyone was elated and sang along. The night was brought to a close in the only festive way that it could have been, the band ended with their Christmas song ‘Christmas Time (Dont Let The Bells End)’, this was great as Christmas is only a few short weeks away.

Both bands were highly enjoyable to watch live and a definite must see if you get the chance.