If I was going to tell you that I knew anything about the 2000Trees festival as I was stuck on a hellish drive down from London on Thursday, it would be an outright lie- the small festival on the outskirts of Chelt enham has managed to evade my personal radar for 8 years since it’s inception and having learnt about it last year, I can count myself lucky enough to have attended this year. Still, besides all of the hype from previous years’ attendants, I had not entirely decided on what I should expect. 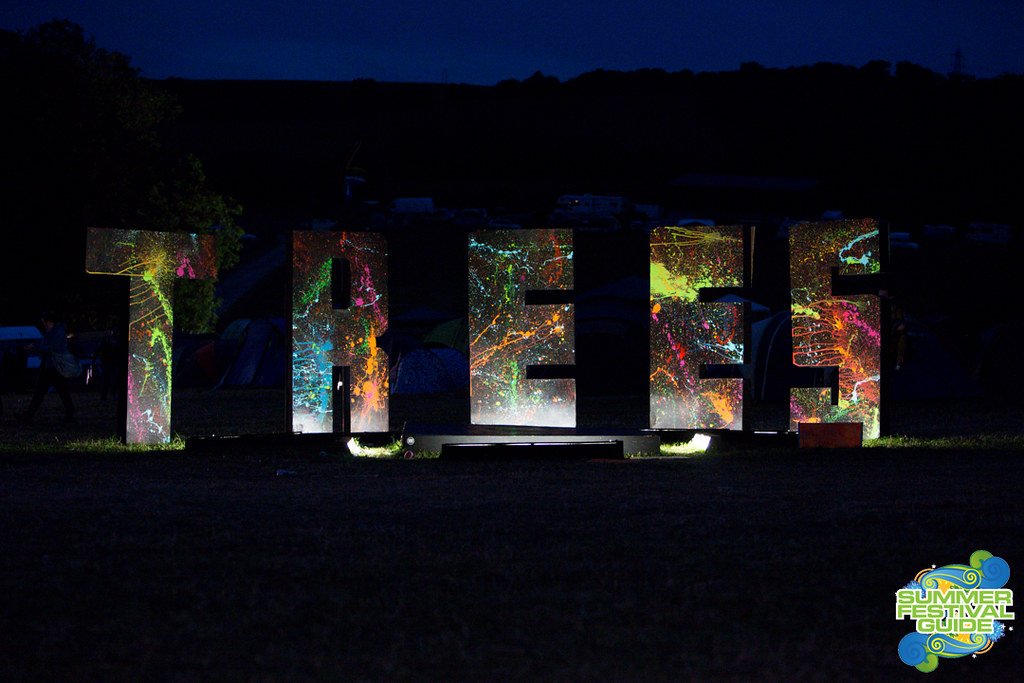 The modest capacity festival is hidden deep in the Gloucestershire countryside, complete with rolling hills, bleating flocks of sheep, and and an idyllic river running around the edge of the site, and even though we were lucky with the weather (A welcome change from the usual rain of the UK festival scene) the scenery would have stood up and still looked beautiful regardless.

Unfortunately arriving later than anticipated, and due to the lack of advertising for Thursday’s acts, we missed some of the earlier performances. However, Thursday night saw the Indie rock and rollers, THE SUBWAYS draw close to the day’s music with their explosively energetic performance at ‘The Cave’ while ANDREW O’NEIL headed up ‘The Croft’ with his Schadenfreude style of comedy, somewhat appropriately referencing to the late Bill Hicks in his set, to warm reception.

I kicked off Friday’s music with a punt on a completely new band to me – BITE THE BUFFALO, and how glad I was that I did. Comparing the 2 piece from Bath, England; to Royal Blood would be short sighted, as the Blues outfit brought filthy riffs, bluesy overdrive, and confident ballsy attitude and stagemanship, yet an honest humility that cemented them as my favourite act of the weekend.  ALLUSONDRUGS treated a modest crowd to their blend of Indie rock and acid infused prog, switching seamlessly from one to the other.  Heading up to ‘The Croft’ I had planned to catch some of SAM RUSSO’s set whilst escaping the peaking sun- the Singer-songwriter providing a nice contrast from Allusondrugs, allowing those who chose to get respite from the sweltering sun with a calm background of songs about love, friendship and moving on. Having only intended to catch a bit of his set, I ended up staying for the whole thing. Back on the main stage, TAX ON HEAT continued the stage’s bluesfest with sweaty and groovy 70’s era licks, with a stage presence that wouldn’t be out of place on a bigger stage, with a bigger crowd. Catching a bit of DEAD HARTS set over lunch at the Cave Stage, a welcomed heavy and tight performance was only dampened by the Sheffield rockers insistence on perpetually insulting the crowd, and trying to goad them into movement. NOTHING BUT THIEVES brought a massive crowd to ‘The Axiom’, the first act of the day to pack out the tent, fans sprawling around outside singing along to their set.

The main convenience of 2000trees scheduling is that most of the line up is staggered over the stages, meaning you only ever have to choose between 2 acts to see or easily catch half of both sets enabling whole days of tent hopping and the potential to (talking in extremes here) see every act (or if you realise that you are in the wrong place entirely, to avoid every act.) I spent a bit of time in the hidden ‘Room No.7’ to sit down and chill out on a sofa, with the sounds of ACOLLECTIVE bouncing across the site.

Back to the Main Stage, and YOUNG GUNS had already seized control of their crowd, with frontman Gustav Wood commanding their crowd with professional bravado that one would expect of a band of this caliber, while the band behind ran a tight ship, as the stadium filling hits kept coming. Headliners DEAF HAVANA, making a welcome return after a self realised absence kicked off their set with ‘The Past 6 Years’, before packing out their set with most of their more recent hits, with the whole crowd throwing back the lyrics right back at them. Humbled by the crowd’s staggering response, an emotional James Veck-Gilodi apologised for their recent absence and with the promise of a new album, a headline tour and new drive and enthusiasm for Deaf Havana, before closing off their night with nostalgic anthem, Hunstanton Pier.

The night didn’t end there for the people of 2000Trees, however. Silent discos then kicked off across the site at the Main Stage and The Cave, whilst The Axiom provided silent cinema until 3am, and acoustic sets around the site on the various busk stops and down at The Forest kept those who missed out on headphones for the silent activities entertained until around 1am, or until they staggered off into the night. 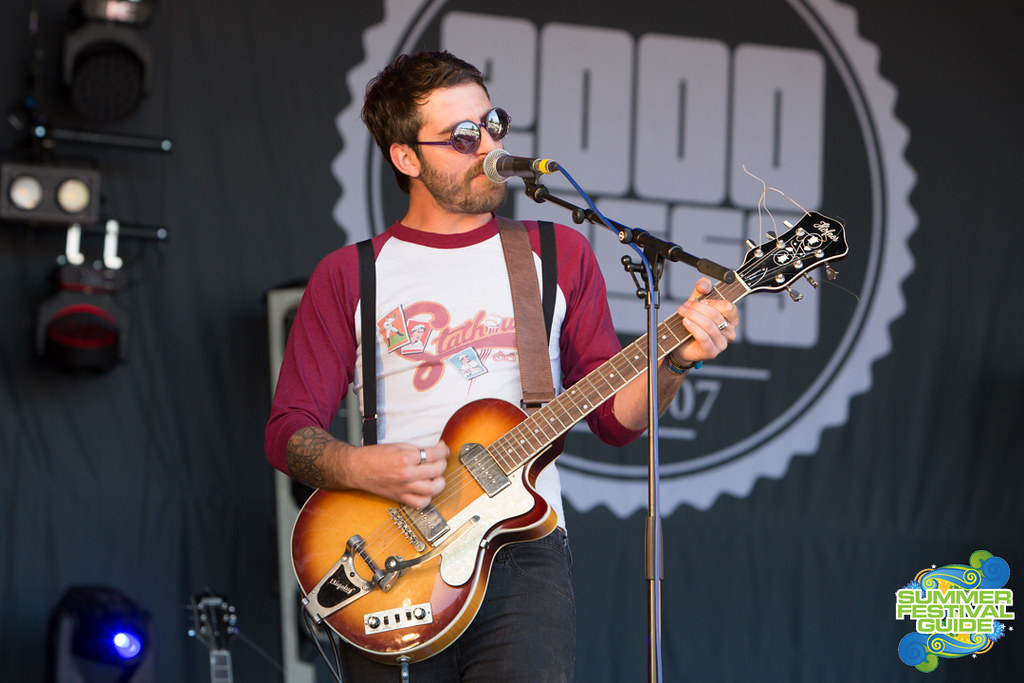 Saturday’s music kicked off with an unusual act on the Main Stage, HUMAN PYRAMIDS. Described as Neo-Classical meets Post-Punk, Axe’s Paul Russell’s brainchild soothingly eased everyone into the day’s music, starting with a melodic introduction from their String quartet and horns section, before gradually coming to a crescendo with roaring guitars and heavy bass. Opening up ‘The Cave’ at 12:25 were Blackpool’s BOSTON MANOR (check out the interview HERE), who didn’t see fit to spare audiences hangovers, and bust straight into a flurry of fast paced punk hits from the go, not relenting until their time was up, having been a fan of BOSTON MANOR for a while, I am glad to have caught their set, before interviewing them later in the day.

Through other people’s suggestion, I headed over to check out MILK TEETH (on ‘The Axiom’), but was unable to get closer than the side of the tent, due to their massive pull for their time slot. The Stroud based group cranked out grungy punk, often showing their very heavy Nirvana influence, but unfortunately failed to capture my attention for all that long, as their (maybe purposefully, and fitting with the grunge genre) set sounded unpolished and loose. I caught a bit of BOY JUMPS SHIP’s set back on ‘The Axiom’, which keeping in the ‘Pop-Punk’ theme of the stage going, managed to play their faster, more intricate set than the preceding band with a lot more technical proficiency and enthusiasm, creating a more enjoyable experience for the casual music fans loitered in between stages for their lunch.

On the subject of lunch, 2000trees has a modest selection of food vendors dotted around the site, by each of the 3 main stages. Festival food for me seems like it has a bad rep, but the team at 2000trees only seem to have booked vendors who would offer a fair service for non-extortionate prices. Grilled Halloumi burgers and sweet potato fries kept me sustained throughout Friday, while a chunky bacon butty and fresh scotch eggs kept me alive Saturday. Monmouth Coffee being served as well was a really big surprise, and you’d get change from a tenner for a meal, which when coming from London is a rarity.

After lunch, songstress ALICE PHEOBE LOU dazzled the crowd with her beautiful voice, serenading the crowd with angelic highs with a bit of Sia-esque grit hidden behind. Forgetting lyrics aside, as she bonded with the crowd over the weather, and treated us all to a chilled, eerie set. As the day edged to an end, and after an outstanding genre spanning set from THE SKINTS, I found myself back up at ‘The Croft’ for THE BIG SIXES, only due to the fact they had spent the day attaching terrible posters to everything across the site advertising their set, and not knowing what to expect initially, my doubts were swept away by a tide of harmonies, expertly crafted songwriting, and top notch inter-song conversation, before their encore consisting of a couple of songs in the crowd, surrounded by a mass of singing fans. THE BIG SIXES managed to work up a predominantly neutral audience into a hyped crowd, a feat that would be natural for an established fast paced Pop-Punk band, but not for a slow and groovy act such as The Big Sixes.

Saturday’s headliners ALKALINE TRIO took to the stage at 21:45 just as the clouds began to burst, having held out -threatening rain- for the latter half of the day. The initial swell of excitement quickly died out, as those who were not diehard fans were let down by what was a lethargic performance, frontman Matt Skiba giving an uncomfortable appearance, whilst he murmured out lyrics to songs with little emotion. Bassist Dan Andriano however was giving a lot more to the crowd, interacting well with drummer Derek Grant and moving around the stage between swapping vocal priorities with Matt. Unfortunately for ALKALINE TRIO, and what may have be exacerbated by a disappointing lack of crowd compared to their stateside presence, or what Matt Skiba may now be used to playing for Blink 182, a more instant degree of stagemanship is necessary to win over a crowd that may not only be there to see you, as not to fade into the background.

So what would I say about my first experience at 2000Trees?

I’m going to be bold with this statement, the attitude at 2000Trees reminds me of that at Glastonbury, albeit on a tiny scale. You get the real feeling that the people around you haven’t just come to see their favourite band, and will spend the rest of their time getting into as much trouble as possible, but more that it’s an annual tradition for them. The nine year old festival caters for everyone, and whilst running about the site this weekend, the amount of friendly faces I would bump into at each act astounded me, only to bump into them 20 minutes later at a different tent.

The site itself is relatively tiny, but not cramped. Even those arriving half way through Friday were finding spots to camp up with ease, with enough room for stoves, barbecues or extra gazebos to sleep under when their tents got too hot.

I’m not sure what my favourite part of this weekend has been- whether it’s the terrific atmosphere from the punters in the know and relish the intimacy of this little festival, the picturesque surroundings that the festival is lucky enough to have, the fantastically located Forest stage or what has been a fantastic line up, bringing some names such as Deaf Havana, We Are The Ocean, MClusky* and Alkaline Trio, and providing emerging and underground UK music a proving ground on the UK festival scene. This weekend at 2000Trees has been one that shall be remembered, relished, and hopefully repeated in the coming years.

Tickets for 2000Trees 10th year are now on Sale, and can be picked up on their site.