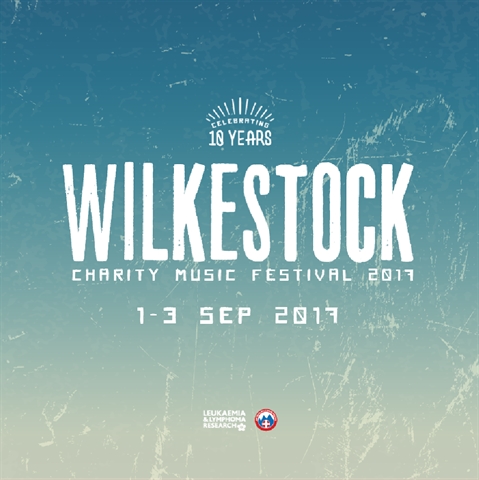 Wilkestock is one of the best annual events in the small festival scene. Returning for it’s 11th year, the festival provided possibly the best line up that it has ever had.  For those who aren’t aware, Wilkestock is situated at Frogmore Hill just on the outskirts of Stevenage in Hertfordshire.  The tiny  festival consists of a main arena scattered with recycled sofas, two bars, and also several other stages around the outline of the main arena, all constructed from straw bales. No bricks and mortar needed! Wilkestock even introduced a brand new addition for 2018, the “Home Grown” stage.

This years’ event basked in glorious British sunshine for the whole weekend which was perfect to lie back, relax and enjoy a cold brew to watch the huge array of bands on the multiple stages. On arrival to the site and after picking up my press passes for the weekend, security had ensured to do a full bag search to ensure everyone’s safety.  Wilkestock, unfortunately have had security problems in the past, although for this year’s fun filled weekend, they appeared to have stepped up their game. 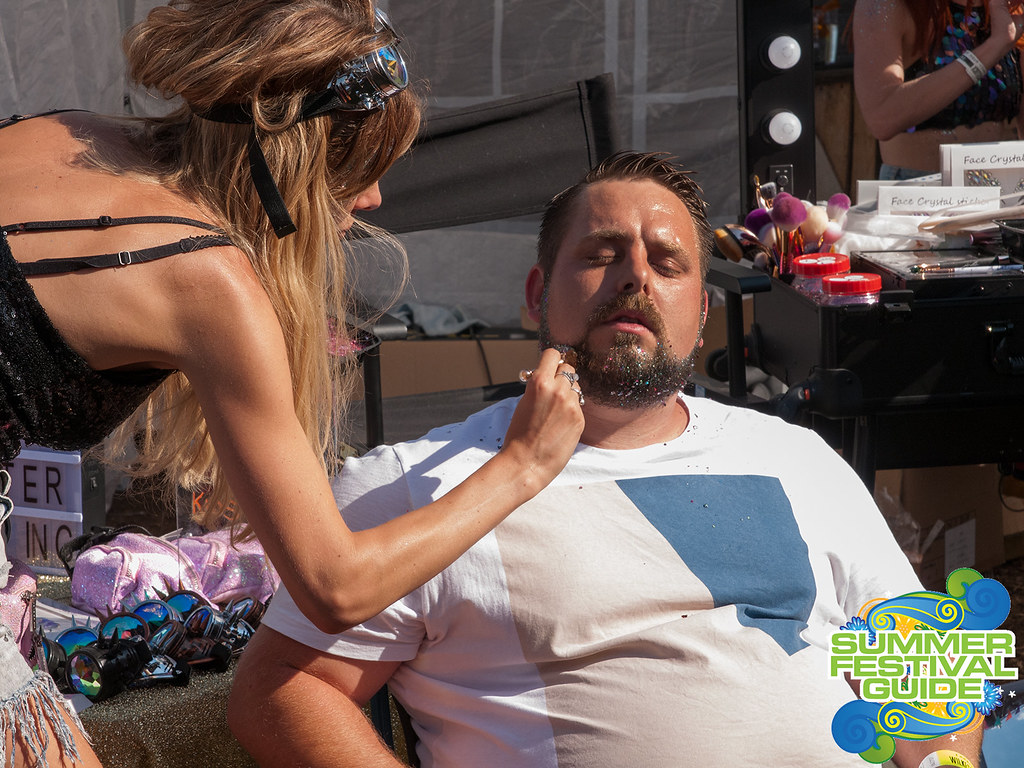 Of course aside from the stage points, the festival also provided appropriate bathroom facitlies, a camping area- with a fancy shower block making it’s debut this year, a childrens area including crazy golf and inflatables to play on, also stalls including sales of traditional festival attire and accessories and also a glitter tent where everyone could treat themselves to a sparkly makeover (this small tent was run by some very jolly people and artists). Surprisingly this small sparkle filled tent often filled with men. It was great to see them walking around with crystals on their faces and glitter filled beards. One thing that stood out for the glitter stall was that all the glitter that was used was biodegradable and is made from plant sources.  Very eco friendly. And I can’t leave out the food court! Oh my goodness, there were some simple, yet amazing food on offer at this festival.  I sampled many, many seasoned sweet potato fries, a pizza (which in my opinion was a little over priced at £8 for a simple cheese and tomato stone baked pizza so there isn’t much to them, although still tasty), and also noodles. The Chinese/oriental cuisine vender served some delicious meals and even though I opted for the simplest most plain option on the menu – I think it was even called plain and simple noodles (which was also a vegan option), but it was big in flavour! So Wilkestock provides ticket holders with three days of great live music variety.  The whole weekend just kept giving, with brilliant performances from all.  Although I have chosen to highlight my top acts for each day of the event. 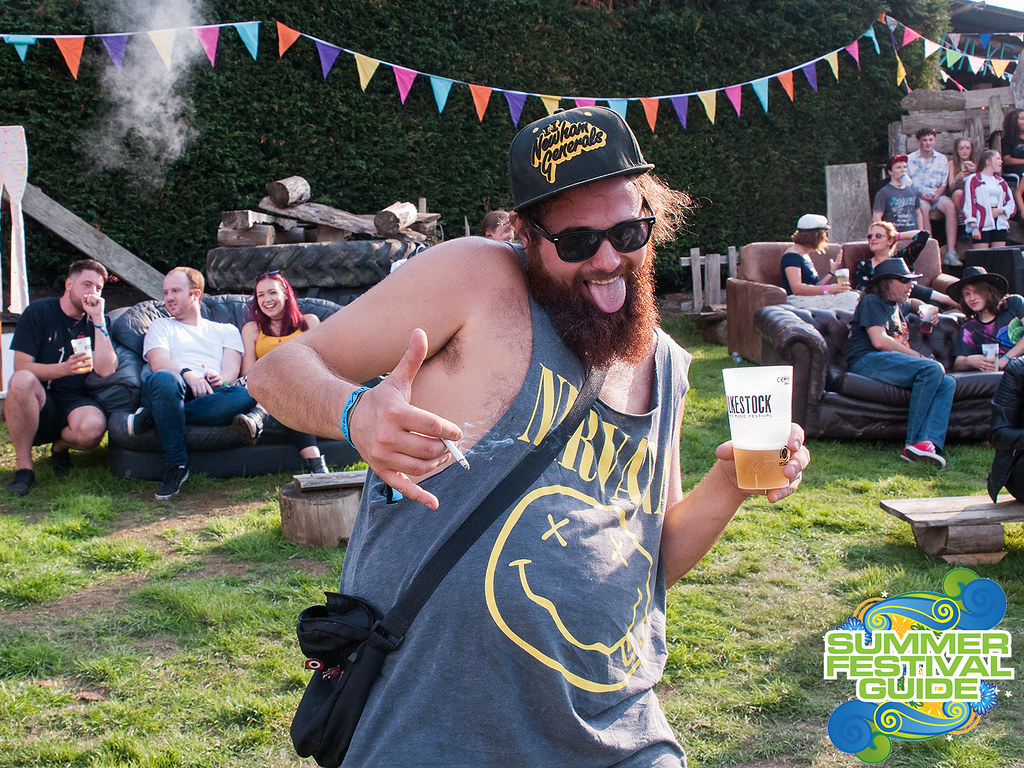 Day one of Wilkestock 2018 was opened by grunge/rock band Tigress.  The five piece from Chelmsford took to the Main Stage to perform their edgy tracks including, “Paranoid”, “Hangman” and more. Unfortunately during their set, they were faced with a few techicnal difficulties so there were occasionally left in silent pauses while not much happened on stage to fill the silence.  Although the band did make light of the teething problems and were able to continue with their set fully, with no further hiccups.

Continuing with a heavier style of rock music, Defences put on an unusual performance. I can kind of liken their music to a combination of Evanescence meets Linkin Park perhaps.  Roaring male vocals and softer female vocals to assist.  The band released their debut album last year and appear to be doing well in the music scene.

Later in the afternoon the Bella stage opened and also had a great variety of artists. One I particularly enjoyed was Bedfordshire based all male pop/punk band Behind The Lines. Not only did they perform some awesome tracks, they also packed out the tent for the duration of their entire set!  If you like music from acts such as Bowling For Soup, Sum 41 or maybe even Blink 182, then this band will probably be one for you to check out. 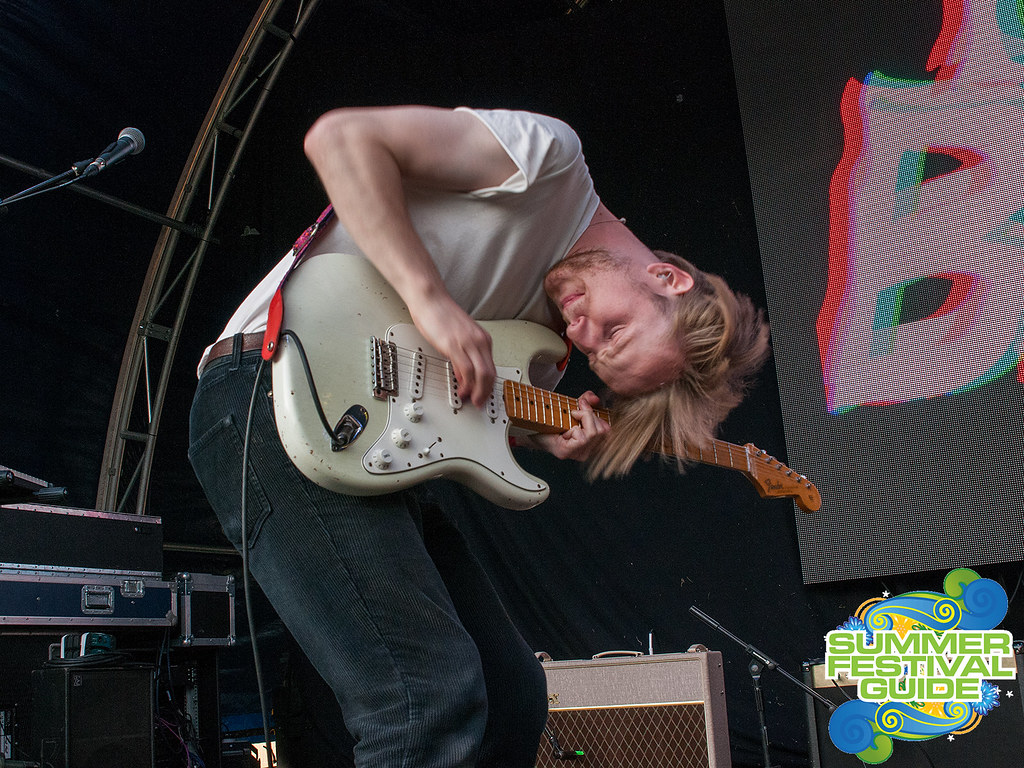 Later in the day, I also got to see a great set performed by Radio 1 favourite, Fizzy Blood. A rock/alternative band who are currently making their way up into the music world. They also actually sound far better live than recorded in my opinion.  So if you get the chance to see them live, then I reccomend you buy a ticket.

The most stand out act for me on friday was Glasgow based rockers The Lafontaines.  Taking to the Main Stage, their set included mostly upbeat feel good catchy music, which got many people up off of their rather comfortable sofas.  At one point the band’s front man even leapt down from the stage to take a walk around the main arena.  He also decided to literally couch surf before leaping off of one of the recycled furniture pieces. Thanks to our photographer, there is an epic jump shot of this exact moment.  We managed to catch up with band after their set backstage and their singer was rather impressed with this photo that we had managed to capture. 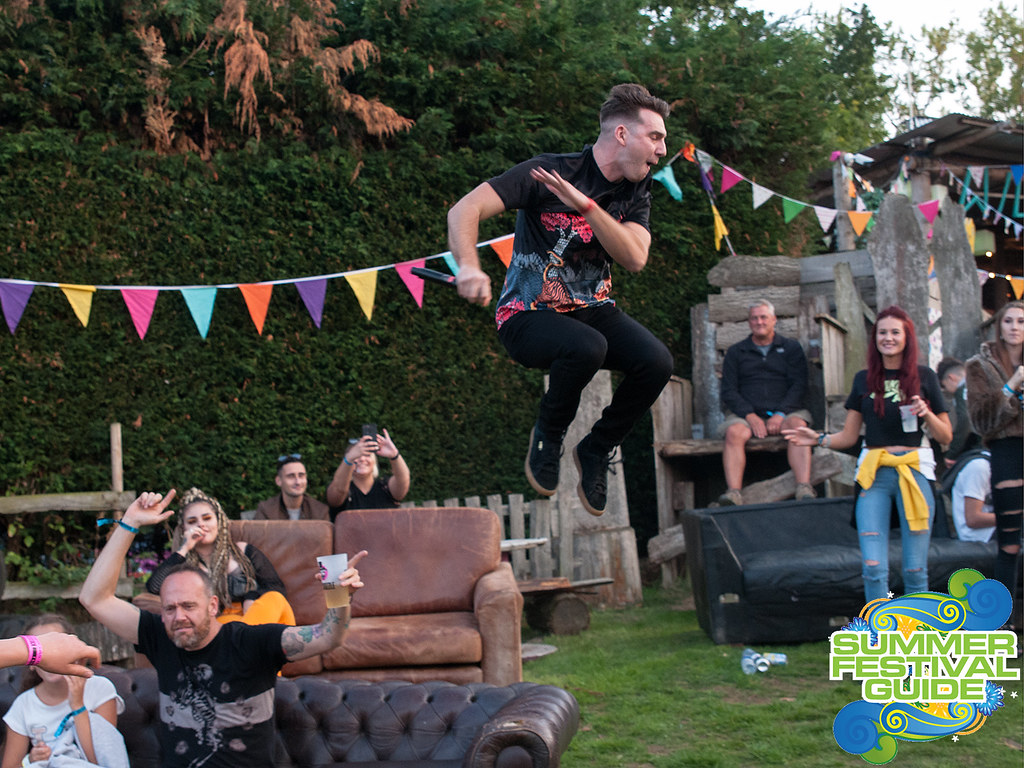 Friday evening also saw another big techincal problem. Unfortunately the festival was left in darkness and almost silent as the main generator had failed (rumour had it).  This had affected almost the entire site, including the food vendors appliances. In total this issue lasted for around half an hour, although during this time the Bella Stage at the back of the site was still able to generate power. So even though the poor Main Stage was hung out to dry, the feel good party vibes continued in the Bella Stage.  Despite the rather large technical hitch, people really weren’t too bothered.  Everyone was still in high spirits and were happy to chug down their drinks from their refillable plastic cups.

Thankfully with the efforts of the organisers, volunteers and production teams, the generator was back up and running.  The site was once again lit up with light and a buzzing electric energy. Everyone was more than ready to welcome the evening’s headline act, Mallory Knox.

The Cambridge based alternative rock band were anticipated by many.  I for one, was very much looking forward to seeing them perform live.  They have had a lot of airplay over the years, particularly from the very popular BBC Radio 1.  As expected, they put on a brilliant show for us all to see, although there wasn’t too much movement on stage from the band, there was an array impressive laser light shows accompanied by smoke machines and performances of all of their well known hits including, “Black Holes”, “Ghost In The Mirror” and personal favourite of mine “Shout At The Moon”. 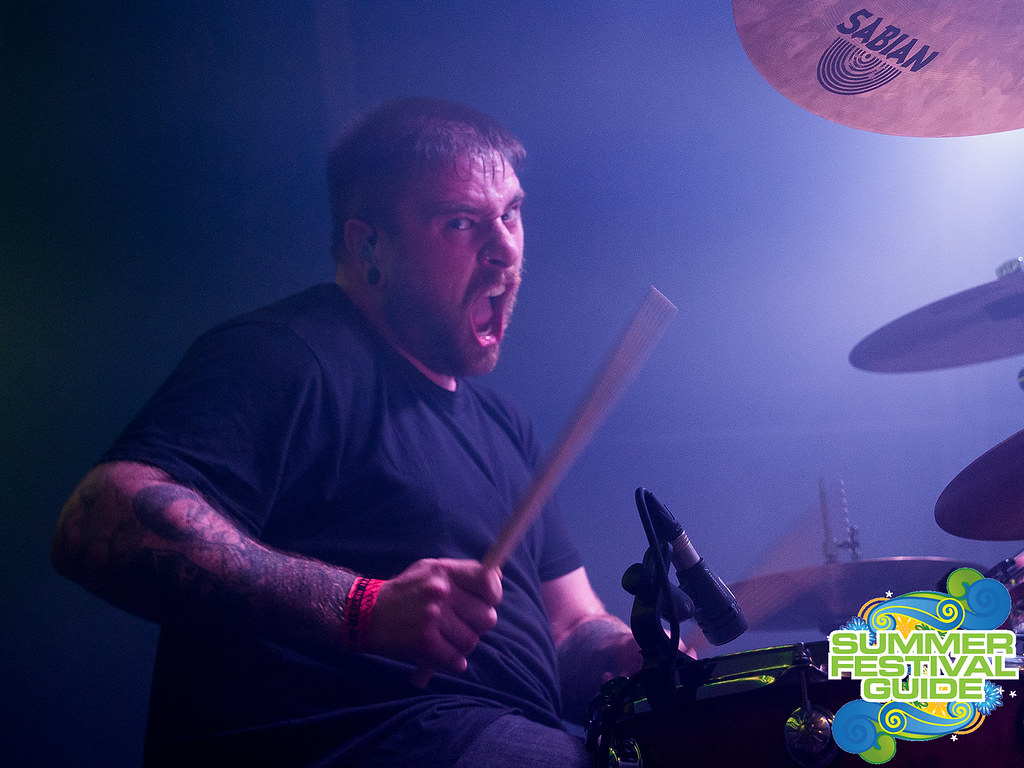 Although a little tired from Friday night’s frivolities, myself and our photographer headed back for day two of Wilkestock!  Saturday was opened by this year’s local Battle Of The Bands winners Slap.

Slap were shortly followed by the band Fiende Fatale.  Their set was just a tad eccentric and I won’t lie, the singer’s appearance was somewhat different to say the least.  With smeared bright red lipstick (putting The Joker to shame) and a vest covered in hot dogs, the vocalist dominated the space he had with his on stage antics and interesting lyrics in the band’s music including a song titled “Vegan Cocaine”. An unusual act, but it totally works, they seemed to be quite popular there that day.

Another act worth mentioning is Wilkestock veterans The Scruff.  The band have been very well recieved in previous years while performing at the festival.  The band’s lead singer Adam, opened their set with probably the most amusing statement of the weekend “I’ve had a stella for breakfast and a hash in the van on the way here, but who cares? The sun’s out!”. The Scruff have returned to the festival fresh from playing at this year’s Reading and Leeds Festival. During their set we heard songs including the band’s current single “White Flag” and the very emotional “Her”.  They ended their set with a brilliant instrumental piece before exiting the stage. 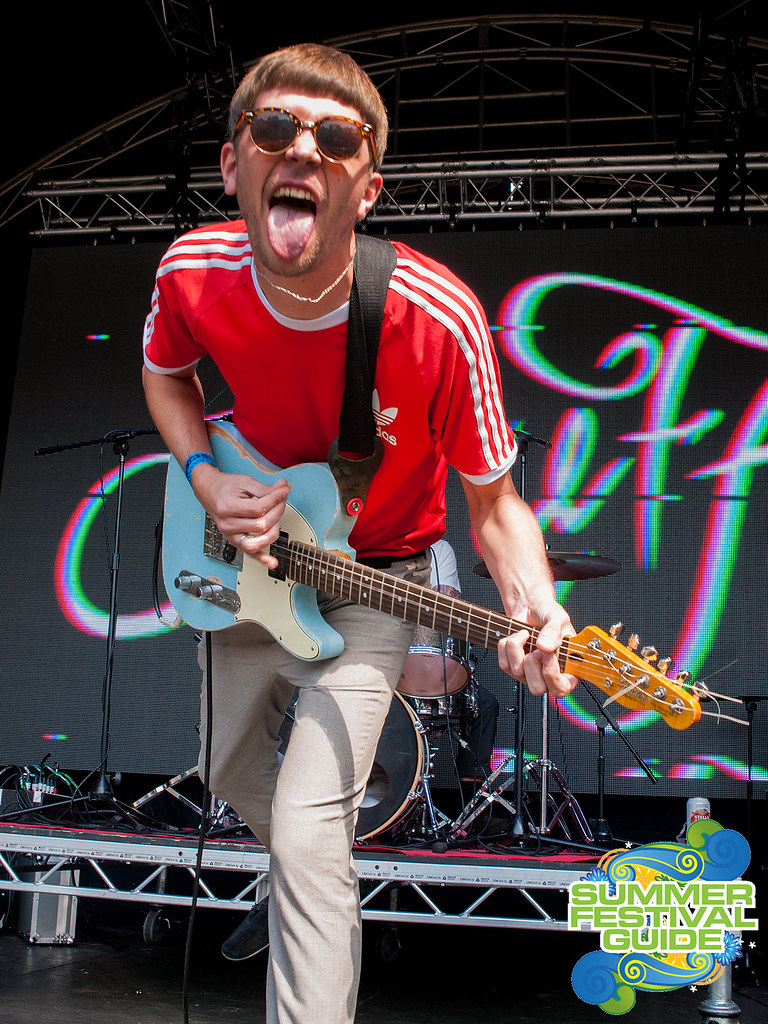 There is one act that cannot be forgotten wherever they go.  They always leave their mark. The act I’m talking about is the very bonkers Strange Bones.  There is no other place to be for this band except on the main stage.  The band, from Blackpool, brought in some impressive crowds to surround the main stage as they performed.  Before this band had even entered the arena to perform, our photographer had said to me “The singer is known for jumping into the crowds”.  Low and behold, he was spot on!  The singer leapt from the stage numerous times, not only to perform and just be part of the crowds of people but also to just lie back and crowd surf too.  As their segment went on they were still pulling in new onlookers to join the masses in the main arena.  There is only one way to describe a live music set from Strange Bones, and that is loud, lary, madness! 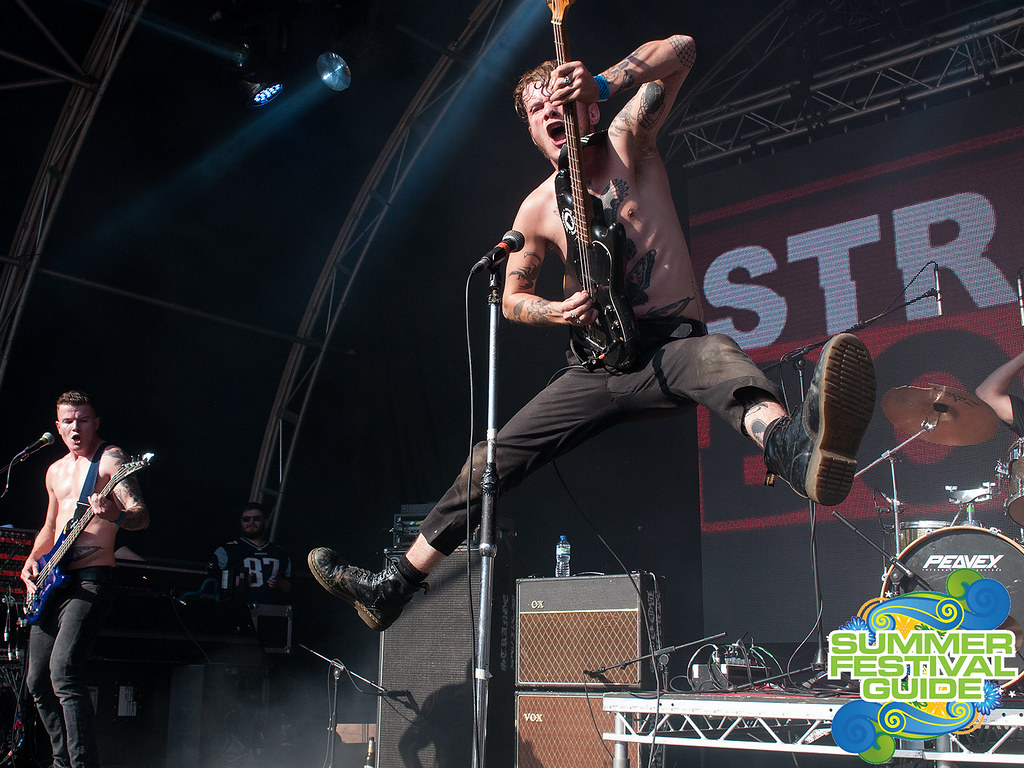 All female rock band PINS brought a different vibe to the day. It was a performance to showcase girl power. I heard many people infront of me using that phrase over and over again. With two band members looking like love children of Sia and Lady Gaga, they certainly brought something different with their style of music, including heavy guitar riffs. Halfway through their set the bands drummer gave us an impressive intrumental solo. The main vocalist had great onstage presence and was often seen standing up on the drumkit platform to perform.

After a fantastic performance just two short years ago, the festival welcome back Eliza And The Bear. They have just finished a tour to promote their newest album “Group Therapy” which is due for realease in October this year. As anticipated just as they did two years ago they proved to be a very popluar act within the Wilkestock community. As far as the eye could see people could be seen up on their feet dancing, even on platforms and props scattered around the grounds. We got to hear performances of their singles “Lions Heart”, “It Gets Cold”, the almighty anthem that is “Friends” and not forgetting an awesome cover of Earth Wind and Fire’s well known hit “September”. 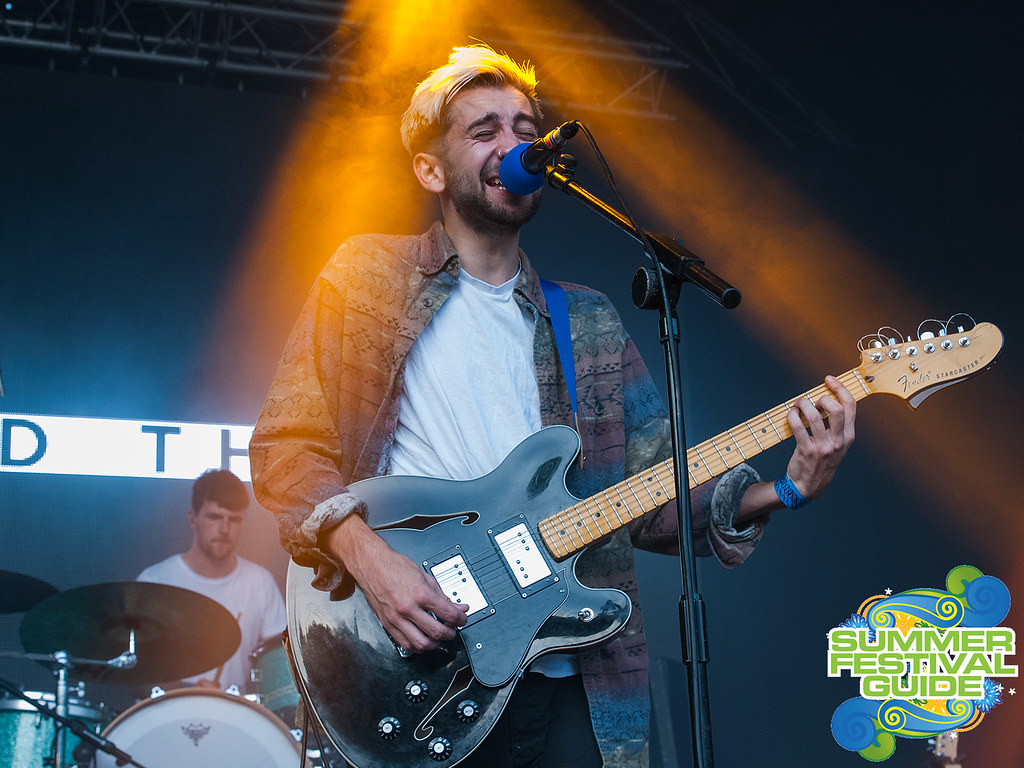 Saturday evening was brought to a close after a performance from headline act The Fratellis.

Althought their was a variety of performances on the Sunday the atmostphere was far quieter and much more relaxed. Performances included sets from Minnie Birch, Didi, Zoe Phillips, Crystal Tides and more. The final act on main stage came from Oh My God! It,s the Church! What a way to end an awesome weekend!

Throughout the entire weekend inbetween each act there were also DJ sets from DJ Adam O and Matt Crawley which encouraged giant, not necessarily pitch perfect sing-a-longs. 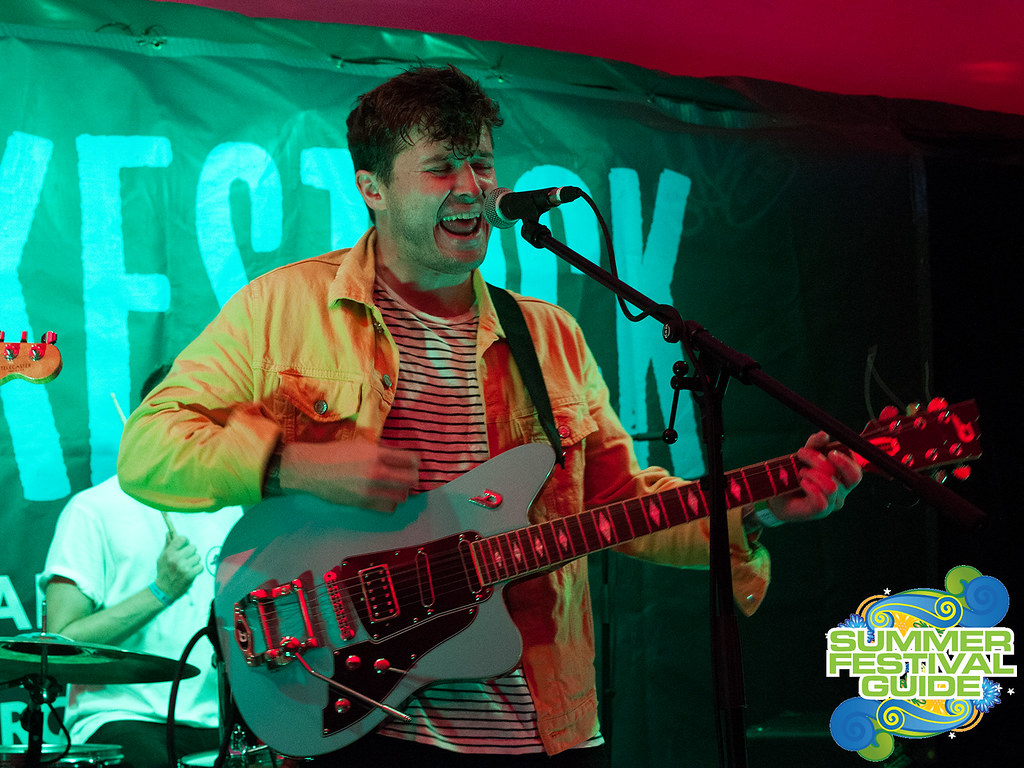 Wilkestock Festival is an event that you will unlikely be dissapointed by, with affordable ticket prices and alot to offer as there is something there for everyone, no matter what your taste in music may be.

Don’t forget to check out the Wilkestock site for more information and next years tickets here!

For more photos by Kane Howie check out our flickr page here!