Home > Reviews > Ghost headline Bloodstock Open Air 2017 – Are they the marmite of metal?

Night two at Bloodstock and we’ve seen a whole host of spectacular bands already. It’s with little surprise that we see the arena considerably less full than yesterday, Ghost are one of those marmite-type bands who seem to divide people pretty cleanly into love or loathe.

The loathe crew really do have a point though, there is just no necessity for a twenty minute introduction of classical piano pieces and a choral arrangement. Honestly not even the actual Pope requires that kind of ceremony. The stage is set pretty sparsely with only some stained glass window banners as a backdop, but the nameless ghouls are sporting their metallic demon masks and darting about the place to make the most of the vast bare space.

Papa Emeritus emerges in his traditional Pope garb and painted face, in the midst of a huge cloud of smoke and it’s straight on with ‘Square Hammer’ and ‘From the Pinnacle to the Pit’. Yelling “Bloodstock are you with us?” it’s clear from the crowd reply that minds are not being changed tonight. Ghost fans are fans, but the margins who are there simply because it’s a headline act, aren’t convinced. It’s not that Ghost are awful by any stretch, they’re good musicians, it’s just they’re not actually that exciting.

Out of the robe now, Papa is leaping around the stage in some sort of cross-emblazoned 90s shiny bomber jacket and there are some rather sombre nuns pacing around during ‘Cirice’. ‘Year Zero’ serves to amp things up a little, only to be sabotaged with the comedic sermon preached by Papa, swinging a censer ball around and trying to look ominous. Yeah sure there’s some pyro, strobe and flash bangs going off, but the atmosphere in the crowd just isn’t there to back it up. 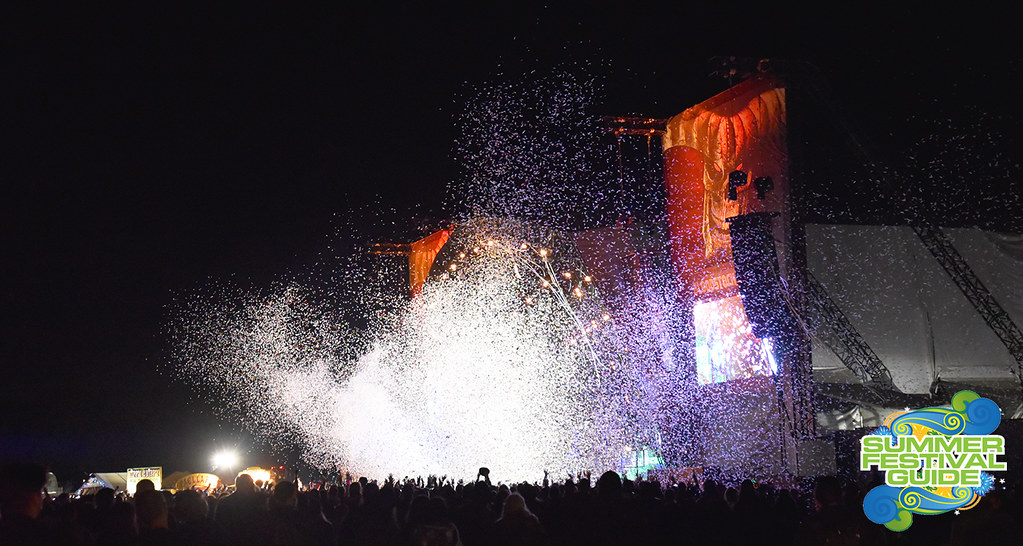 In the crowd someone dressed as Papa Lazarou is yelling “I’m the real Papa” to the mirth of those around him, and Papa Emeritus appears to reply with “I want you to say loud in your British English voices… NOOOO! In you life… say no to shit.” which seems fairly apt as the area has thinned considerably with more people saying no to Ghost (and the fact that it’s cold as balls tonight).

Closing with ‘Ritual’ and ‘Monsterance Clock’ there’s actually little ceremony at the end and people are walking before they even strike the last note. It’s hard to judge this Ghost performance without conflict – they’re good, but they’re not great. They’re capable, but they’re not exciting. I guess the biggest thing to recognise is that they were preceded by one of the most insane Kreator shows we’ve ever seen, and unfortunately for Ghost, their slower more melodic style is sort of like throwing a bucket of water on all that built up fire and fury.

All photographs © A. Hyams – Do not use without permission