As one of Bestival's satellite babies, Common People Southampton was always going to be hit and in it's inaugural year 2015 proved you can have all the feel of the festival in the middle of a city, but now round 2 has started on the common and there's a new sense of ownership, like Southampton has taken CP to heart.

Over in Oxford a new dawn rises on a sister festival, but we're getting the kinks-ironed-out experience of a trialled triumph and the site looks incredible. Towering high right inside the main gates is The World’s Biggest Bouncy Castle, a Bestival x Something Creative collaboration that looks like it should have been made by Willy Wonka or be home to a herd of unicorns. Apparently it can comfortably hold one hundred people at a time, but we bet the somersault-police couldn’t catch us in that many… 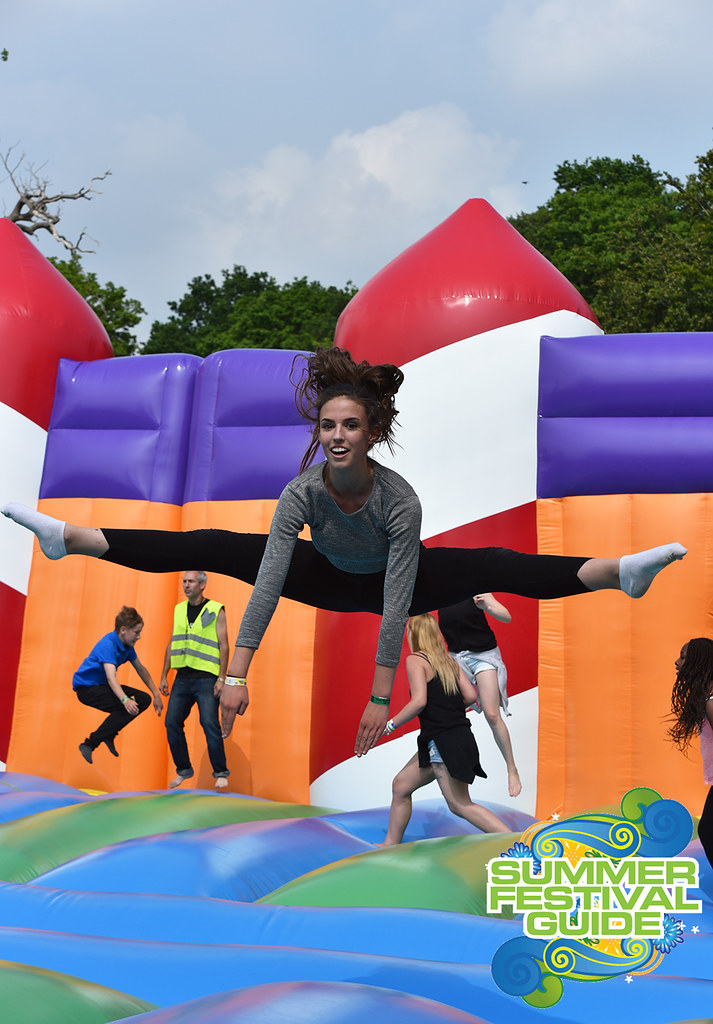 A decent queue is forming already but it’s off to the main stage we go for first band of the day, Wild Front who to be honest look a little scared to be there. After a sort of quiet start, the Hampshire lads get their rhythm and there are some full on dancing fans down the front.

Next on are West End Kids, an energetic musical troupe who buzz through hits from all the biggest stage shows, followed by the legendary kids comedy duo The Chuckle Brothers. Who can resist a bit of to-me-to-you with Paul and Baz (…and Tinchy Stryder)? The massive and rowdy crowd singing along with them is decidedly younger than they should be for long-time fans, I can only assume they’ve been hitting up youtube in preparation for the festival… 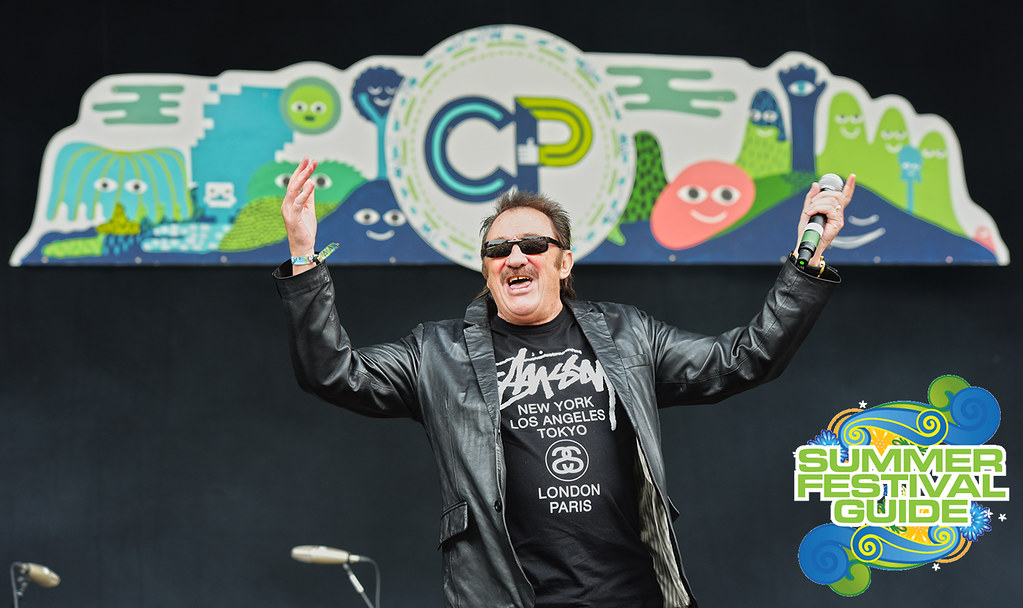 Rapper Lady Leshurr gives us a short but energetic set, after being over an hour late due to ‘traffic’ but dressed head to toe in camo and waxing lyrical about her weave and being from Birmingham, hit ‘Brush Your Teeth’ goes down a storm. Though she clearly doesn’t trust us – yelling “Has every single one of you brushed your teeth today?” “I feel like some of you are lying”. The Sugarhill Gang crowd-please with ‘Apache (Jump on It)’ and ‘Rapper’s Delight’ with Hen Dogg sporting epic double-denim and a rather fetching gold tipped cane. 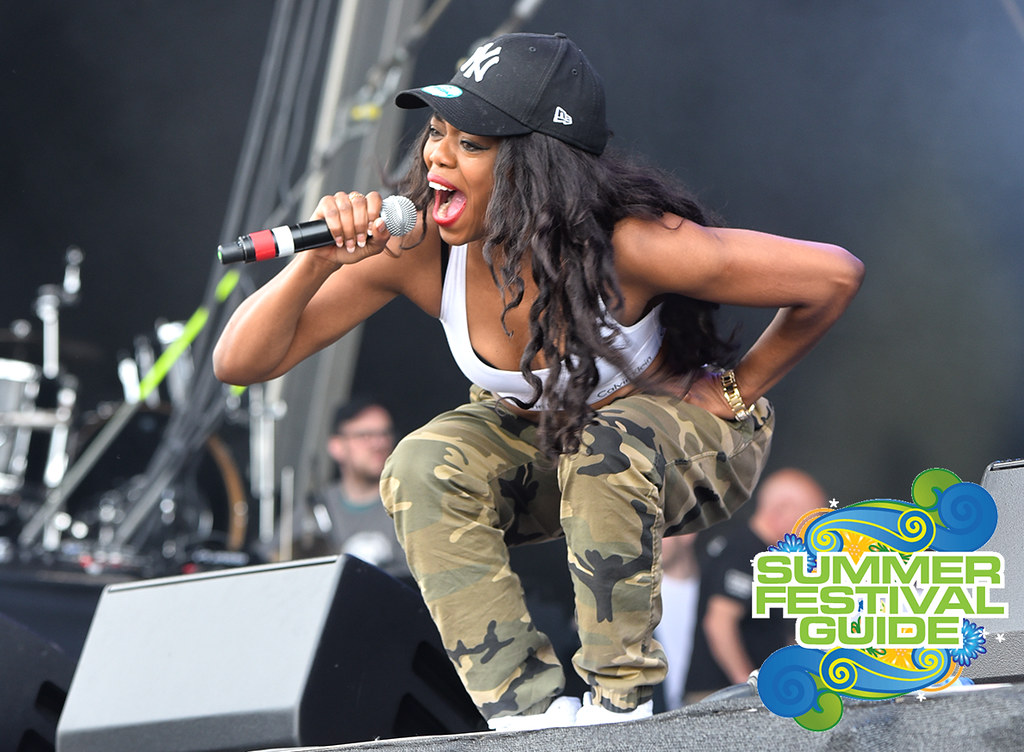 Over on the Uncommon Stage Southampton crew Our Hollow, Our Home have drawn a big crowd, and Chris is jamming on the guitar in The People’s Front Room. Elsewhere the Jam Jar bar is packed with people sipping fancy martinis and the kids area is awash with laughter from the wonky bicycle trials.

Hometown band Signals pack out the Uncommon stage, as mermaid-haired frontwoman Ellie bounces about, we get a taste of the curiously named genre ‘math pop’. Ghostpoet is getting soulful on the main stage to a big crowd, and Gaz Coombes is rocking less of the Supergrass era sideburns and more of his second solo album ‘Matador’.

Public Enemy get the crowd moving with the likes of ‘Don’t Believe The Hype’ but it’s just not the same without clock-toting weirdo Flavor Flav who apparently wasn’t allowed to come for some reason – “F–kin governments. Flava flav can’t be here because of F–kin governments”. The kid in the front row wearing a PE tshirt and a bedside alarm clock around his neck is obviously devastated.

After a tasty dinner at one of CP’s many amazing food outlets (Soft-shell crab burger? Brie and Pear toastie? Truffled mushroom quesadilla?) we are ready to take on the night, and so are Primal Scream. Rocking an eye-offendingly bright pink blazer, frontman Bobby Gillespie lopes about the stage looking every bit the archetypal boho rockstar. It’s a great, powerful set from the band with new album Chaosmosis material hitting the mark. Over on the Uncontained Stage (read: rave station) Kurupt FM are winding up the absolutely rammed arena into a frenzy, there are bodies everywhere – it’s a mostly teenage rampage. 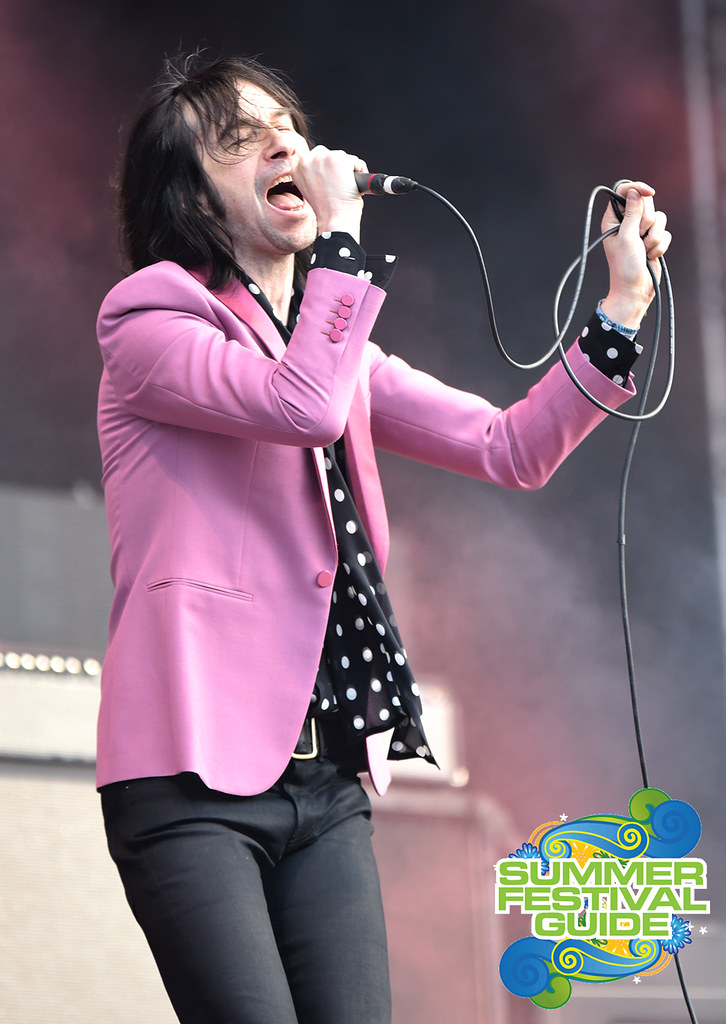 On the main stage, the much anticipated return of Southampton son Craig David has drawn practically everyone from around the site and it’s not without a touch of nostalgia that we’re singing along to hits ‘Fill Me In’ and ‘Re-Wind’. Though the TS5 moniker is largely being ignored, it is fun to hear him mixing in tracks from other artists and sampling some proper legendary stuff, but to be honest – we all just love a bit of him singing his own name over and over again. Ahh memories. Sunday stacks up a bit cooler but everyone still seems to be rocking up in bright festival-attire, and the telltale signs of yesterday’s sunburn are found in every bald head or exposed shoulder today. Shrieks of mayhem are emanating from the behemoth bouncy castle and a quick peek inside is like looking at a candy-coloured warzone. Kids are tombstoning each other, toddlers are being skimmed within millimetres by their falling parents and the flip-police have no hope of stopping the teenagers intent on putting the maximum effort into possible neck-injury. It’s awesome.

Next door on the Uncommon Stage, Arid Wave are rocking everyone’s socks off, but it looks like Hercules Morse on the main stage have fallen foul of the Sunday hangover absentees – there just aren’t that many people here yet. M.E.R.C.Y. – Southampton Urban Collective take over the main stage in the absence of Xylaroo, with two of the most adorable… sorry, SICK, hiphop dancers Jamie and Jamal giving us proper attitude and a heap of up and coming artists alongside.

Later on, Mr. Motivator draws a massive but spacious crowd as young, old and anyone in-between are getting their groove on with the positively ageless Mr. M and his lovely wife. Sporting a dazzlingly terrible-yet-amazing lycra onesie he plugs in his jams and off he goes doing squat technique mixed with curious life coaching “If the grass is greener on the other side, you probably aren’t watering yours. No man's gonna water my grass”. Telling us we’re “Much better than Oxford” only serves to endear this living legend to us more, and with classic moves such as ‘drive the car’ and the possibly slightly inappropriate for a younger audience ‘whip the horse’ – what’s not to love? 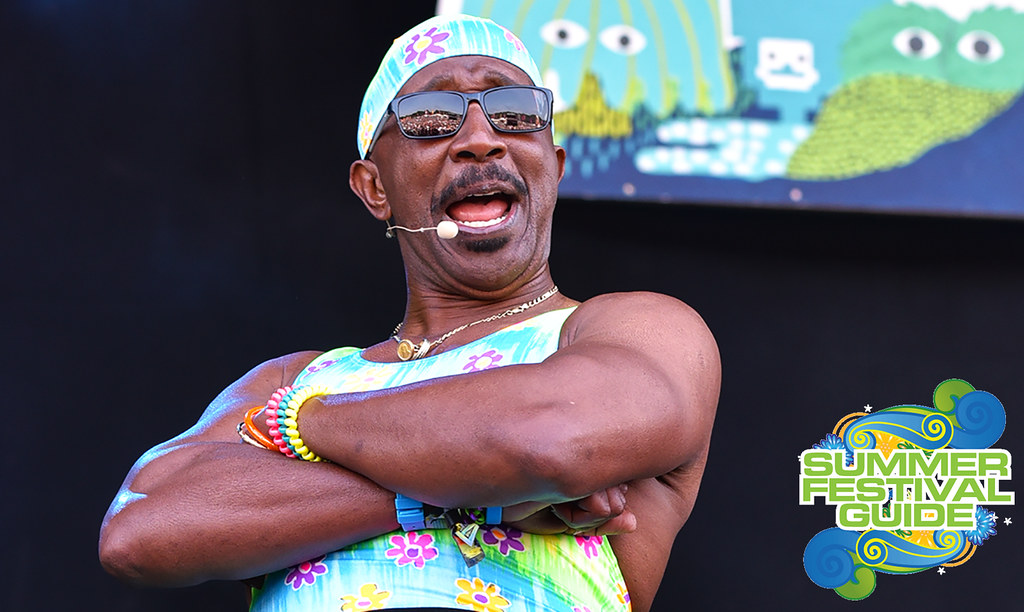 Brighton scenesters The Magic Gang look like they’ve stepped right out of Empire Records and give us a good dose of proper melodic indie pop before Chas & Dave take to the stage (flat-cap mandatory) to tell us about those ‘London Girls’.

Now we brace ourselves for the powerhouse of unmentionably bad behaviour that is The Cuban Brothers. The CB’s are of course rocking a new set of crazy patterned suits for the occasion, throwing down headspins, flares and insane flips all over the shop, as Miguel assures parents that all of the rude things he says will go right over the kids’ heads. This would be fine, but there’s no way you can make those kids un-see him pretending to slam his willy into a microphone whilst wearing only a thong, now is there? That right there is seared into some young memories. Newest member One Erection almost smashes his teeth out doing a massive front tuck off the stage into the pit and gets thoroughly told off by security for hopping into the crowd. M.E.R.C.Y lads Jamie and Jamal are invited on stage to dance with the CB’s and their faces are absolutely priceless when the guys hit the stage in their holographic fringed jumpsuits. However they are visibly horrified when Miguel dons a pair of extremely skimpy Bjork-esque swan pants. ‘Mike For President’ is the only song I remember because there was so much happening. He gets my vote though. 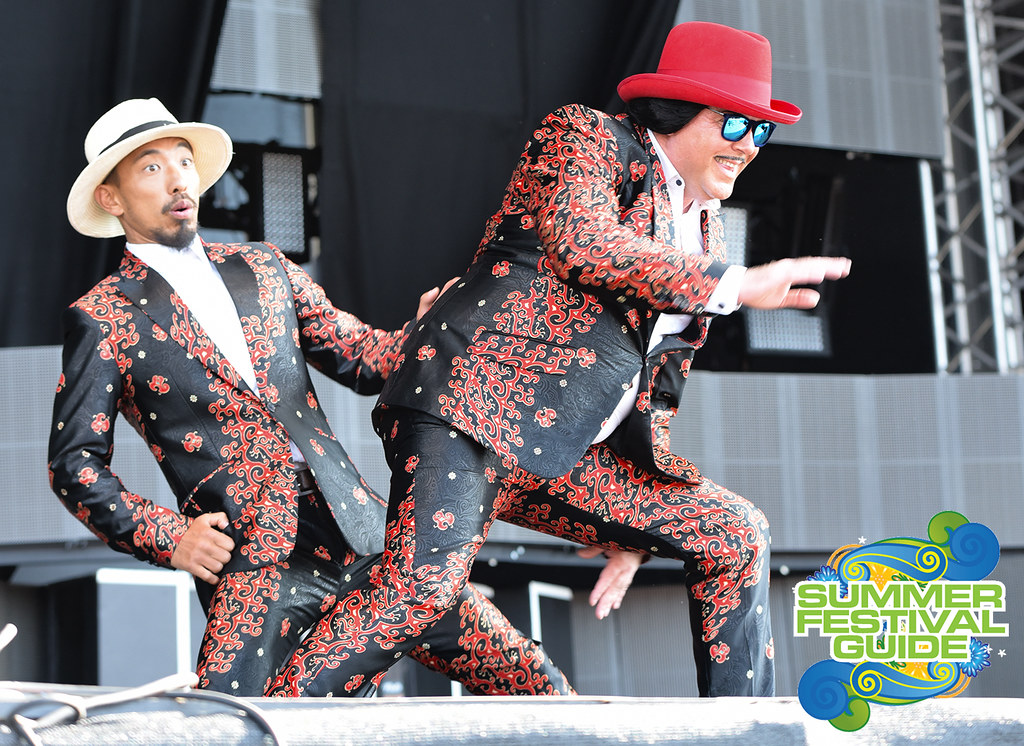 Jamie Lawson’s ‘Wasn’t Expecting That’ has everyone up and singing in the sunshine – he even managed to get us to do a decent job of harmonizing, but it’s Katy B’s set that really lights the place up. Bathed in the setting sun her sequined dinosaur dress shimmers all over as she dances around the stage with her troupe, and the likes of  ‘Lights On’ and ‘Katy On A Mission’ has the arena jumping – especially when she doubles up the tempo. Chalk up another win for Southampton as Katy yells “Southampton, you are abosolutely smashing oxford right now I have to say”. 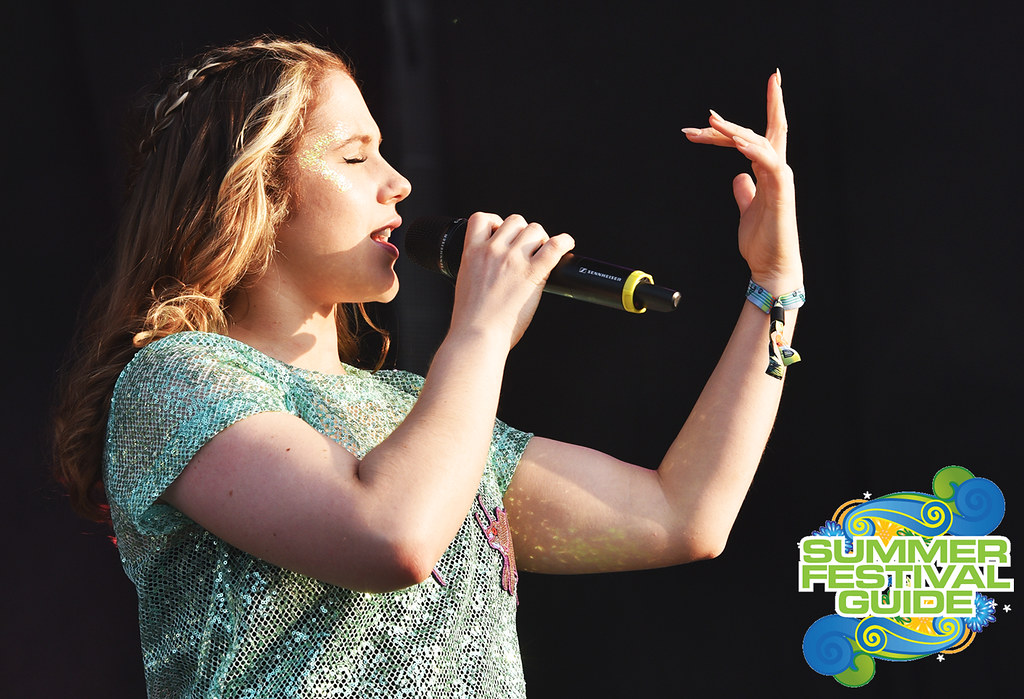 As the last of the daylight goes and the Helter Skelter and Big Wheel go neon, there’s just one more act to finish off what has been another amazing Common People festival, and it’s no small fry. Eighties synth-pop legends Duran Duran blow through a hit parade of absolute classics such as ‘Wild Boys’, ‘Hungry Like the Wolf’ and ‘Girls on Film’. With tributes to both David Bowie and Prince, it’s a special one and ending with anthem ‘Rio’ couldn’t be more fitting on the costa del Southampton. As the arena clears and the crowd spills out into the streets to head home, it’s obvious that once again CP has been a massive success, and it sounds like Oxford is loving the CP vibe too. 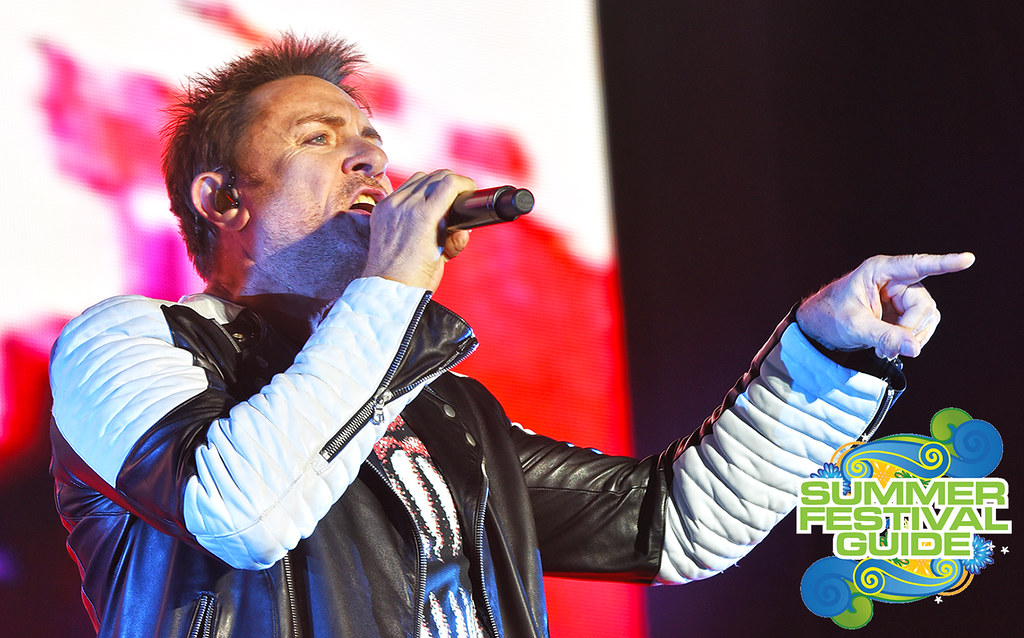