Sundown Festival returned this weekend for three days of pop, drum and bass and house music, offering, as one girl gushed on the first night, "great value and a great line up." Kicking off with an exclusive 'campers only' opening party from 5pm hosted by SubSoul, house music belted out of the Big Top tent throughout the evening. With one-hour sets from upcoming producers including Après – who has just graduated from university, DJ S.K.T who reached the top ten of the charts with 'Take Me Away', Friend Within (of Renegade Master fame), GotSome and Icarus, who closed the night with a grimier, bassier vibe. But it was Toyboy & Robin's set, from start to finish – with a perfect opening of Bicep's 'Just' mixed into Format:B's Ibiza smash 'Chunky' and ending with their own massive hit 'Jaded' – which gained the biggest reaction. With the music switched off dead on 11pm, the hundreds if not thousands of revellers were able to catch a good night’s sleep in preparation for nearly 20 hours of live music.

After filling up on a Sainsbury's big breakfast – the handy thing about Norfolk Showground is that there's a McDonald's, Costa and Sainsbury's within a short five minute walk – SFG made their way to the main arena for the first time, after mingling with Kiss FM breakfast presenters Rikki and Melvin and Facebook famous Jack Jones.

Following a last minute cancellation from Jess Glynne due to recent vocal surgery, Becky Hill – who gave a standout performance last year – was left to foot the bill, a task she took on with ease; her new collaboration All My Love, produced by Watermat and Tai showing off her seemingly endless vocal range to the booming house beat. Once the growing crowd realise how many of this year's chart hits she's put her voice too; Wilkinson's 'Afterglow', Oliver Heldens and 'Gecko (Overdrive)' to name just two more, everyone's lungs are given a real workout as she makes way for Karen Harding.

Similarly a go-to-vocalist for house producers, the glamorous singer shines brightest throughout her top-ten track 'Say Something' and new Blonde-collab 'Feel Good (It's Alright)' – the latter with a strong and catchy enough hook and chorus to top the charts when it's released. "Up next we've got the man that gave us the tunes Pow and Oi" proclaims Rickie and Melvin of Kiss FM fame as they ensure the crowd are suitably hyped up before introducing each act over the weekend. And the phrase 'hyped up' barely describes the atmosphere when Lethal Bizzle arrived onstage … gliding accords on a Segway no less. Sporting one of his own 'DENCH' t-shirts, the likes of Rari Workout and Flashing Lights descend into his request of numerous circles of mosh pits. "This is the last festival I'm doing this year. Let's make it the best one" he beckons, launching into The Drop and Fester Skank.

Contrastingly, MNEK, backed by two powerful female vocalists take things down a more smooth R&B/pop route during Take You To A Place and Ready For Your Love. Meanwhile in the Big Top it's a Defected Records take over. Returning for their second year, label boss Simon Dunmore, leading lady Sam Devine (cue crowd surfer) and relatively new Low Steppa keep the thousands of house lovers satisfied as they bring Ibiza vibes to Norwich. But, expectedly, the biggest draws come from Gorgon City and then Hannah Wants – the latter who's had a whirlwind year, with a Mixmag cover shoot and story last month.

Leading the evening's talent is Sigma, arguably the breakout drum & bass act of the year. Performing tracks from their soon-to-be-released album Life,  Labrinth-collab Higher, which sees girls on shoulders and a building d'n'b edit of Rhianna's Diamonds as well as Lighters with its Chase & Status-like beat, keep the crowd's energy up.

Although, the highlight comes from Ella Henderson's appearance as she belts out Glitterball, faultlessly, along with all the girls – and guys – in the audience, proving herself as one of The X Factor's finest exports.

With flares in hand, it was down to London collective and Sundown first-timers Rudimental to headline. Flanked by live instrumentalists and numerous guest vocalists including Will Heard and Anne Marie who feature heavily on second album We The Generation, the hits everyone knows prove memorable, and the newer as-yet-unheard songs fares nearly as well. With ten members onstage, Right Here, Never Gonna Let You Go and Waiting All Night, the latter dedicated to a passed friend, certify their headlining credentials with ease; the drum & bass + live instruments set up clearly a well honed success. 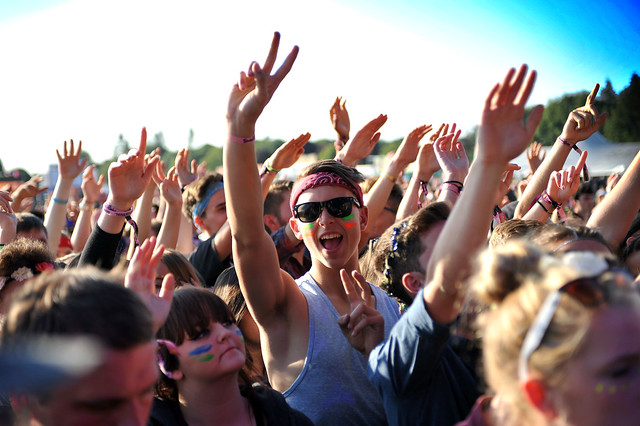 Following a failed attempt to get into the DJ EZ after-party on Saturday night, everyone was left clueless as to why, until a member of the merchandise team told SFG the following morning that, allegedly, police were called to shut down the warehouse event due to mass over capacity. Catching Zak Abel, whom SFG later caught up to chat with, the young Londoner's performance was a case of great voice, potentially massive songs, minimal crowd – most likely down to his post-lunchtime set time. Running From Myself and the Kaytranada-produced Say Something, from his brilliant new seven-track EP, One Hand on the Future, are given soul-filled, emotive outings and deserve to gather a lot of attention in the very near future; as does his somewhat brave cover of Daniel Bedingfield's Gotta Get Thru This…

"This young girl actually went to school with Zayn Malik. I would love to have her kisses for breakfast" says Melvin (Kiss FM) as he welcomes Melissa Steel. With slick black hair and vibrant trousers, she bounces onstage, along with two impressive backing dancer. The crowd are quick to pick up on all the tracks she's provided vocals to this year; from the reggae vibes of Drunk and Incapable to her top-ten pop breakthrough Kisses for Breakfast. Ending with Kove's D&B hit The Way That We Are and an acepella version of Blonde-collab I Loved You, Melissa's a pop star to keep an eye on; especially with her new single You Love Me (featuring Wretch 32 – who performs next) coming out this week.

Sporting a new, almost unrecognisable head of hair, Wretch 32 tells the story of Blackout with humble intent; "I started out having to in to the shop to get electric", he says, adding that there is a "hope for life for everyone". A heartfelt version of Six Words stays in the audience's heads, as does Don't Go. Trekking over to the RAM Records stage, it's a drum and bass lovers paradise; Culture Shock, DC Breaks, Mind Vortex, Sub Focus and label head honcho Andy C each rattling out energetic heart racing beats throughout the day. Back at the sunny main stage, Maverick Sabre, who it seems has been away for years now, is asking the question, "can you be my Sundown choir?" The reason? An impeccable cover of Chaka Khan's Ain't Nobody, led by his, as ever, individualistic vocal style. Airing his new single Come Fly Away, the soulful lyrics are bound to score him a hit, and just as he reveals to SFG later during an interview that a new album is imminent as well as a UK tour, he's set for a big return.

Headlining on Sunday evening, Tinie Tempah, whom performing at his last festival of the summer ("lets make it the best one" he shouts) ran through his biggest hits; Pass Out, Frisky and Miami 2 "Norwich", the collabs; RIP, Not Letting Go and Tsunami; and  new single "which i've not performed anywhere else" Turn Up The Music – which is bound to go to number one with a Katy B feature and a cheeky, infectious house sample of KDA's track, Rumble – it was a crowd-pleasing set for sure, and one that left everyone with smiles on their faces before leaving to go back to school/college/work.

For SFG and friends though, it was Nero's live set which smashed it most. From the intense ground rattling opening bass right to the trio bowing at the end, it was easily the best hour of the weekend, possibly the year in terms of this festival season (closely behind seeing Faithless at Balaton Sound). Having wanted to see Nero for countless years now, it was refreshing for the anticipation to be fulfilled. Alana Watson, who would stalk the stage in a lace dress ensemble, appearing and disappearing between songs,  provided transfixing, almost haunting vocals, to Guilt, Me and You, Innocence and Satisfy among others, while the guys took charge of the drops and beats – all aided by an insane light show onstage. With a new album imminent, Nero's grip on dance music will soon re-tighten.