Have you heard of Nozstock before? I wouldn't blame you if you haven't. This modest 5000 capacity festival, aptly sub-headed 'The Hidden Valley' is hidden deep within the Herefordshire countryside- near the Hamlet of Bromyard. Now in it's Seventeenth year, Nozstock has established itself a dedicated fanbase of locals, and those from increasingly further afield. Each year has a theme, and this year's- A Hitch-hikers Guide to the Galaxy, saw the site lovingly decorated in everything space. The theming did stop there though, with space related workshops and activities for the younger members of families and the audience, those tired from listening to music could retreat to any of the activities area to participate in Jetpack making, building spaceships, rockets, blacksmithing, to the vaguely advertised 'Space crafting' (at the Enchanted Glade 17:00 Sunday).

In my now seemingly traditional festival journey, a gruelling 8 hour drive down to Bromyard at lunchtime had me pitching my tent in darkness, in the hammering rain, undeterred from enjoying ourselves, we set off to explore the site and listen to some music.

Nozstock festival has an intriguing demographic, due to it's diverse acts -as you will hopefully read throughout this writeup- and as the night draws on, the crowd grows wilder, heading down to the COPPICE, BULLPEN, and CUBICLES stages, all dedicated to different styles of Dance, Electro, Dub, 2 Step, Hip-Hop, Garage, Basscore and Drum 'n' Bass. Admittedly, upon arrival; and without any prior knowledge of the festival I was worried that my only dance move 'Big fish, Little fish, Cardboard box' wouldn't last me throughout the weekend and I would be ousted as an impostor of dance and electro music. Much to my relief, the friendly crowds didn't catch on.

Heading to the Orchard Stage for NEVILLE STAPLE BAND's headline set, we caught a jam packed performance full of crowd skanking in the mud, churning up the sodden floor, kicking the first night of music off with a energetic and tight performance. It has to be noted however- that this festival breaks the tradition of curfew by 11, or half past, with headline sets on the mainstage starting as late as 23:45, with smaller bands playing throughout the site to as late as 2:40, before music stopping around 3:30. The site however is fantastically laid out with sound from each stage not spilling over into over crowds, and bearing in mind that it only takes 10 minutes to complete a circuit of the site, this is a seemingly impossible but well realised feat. 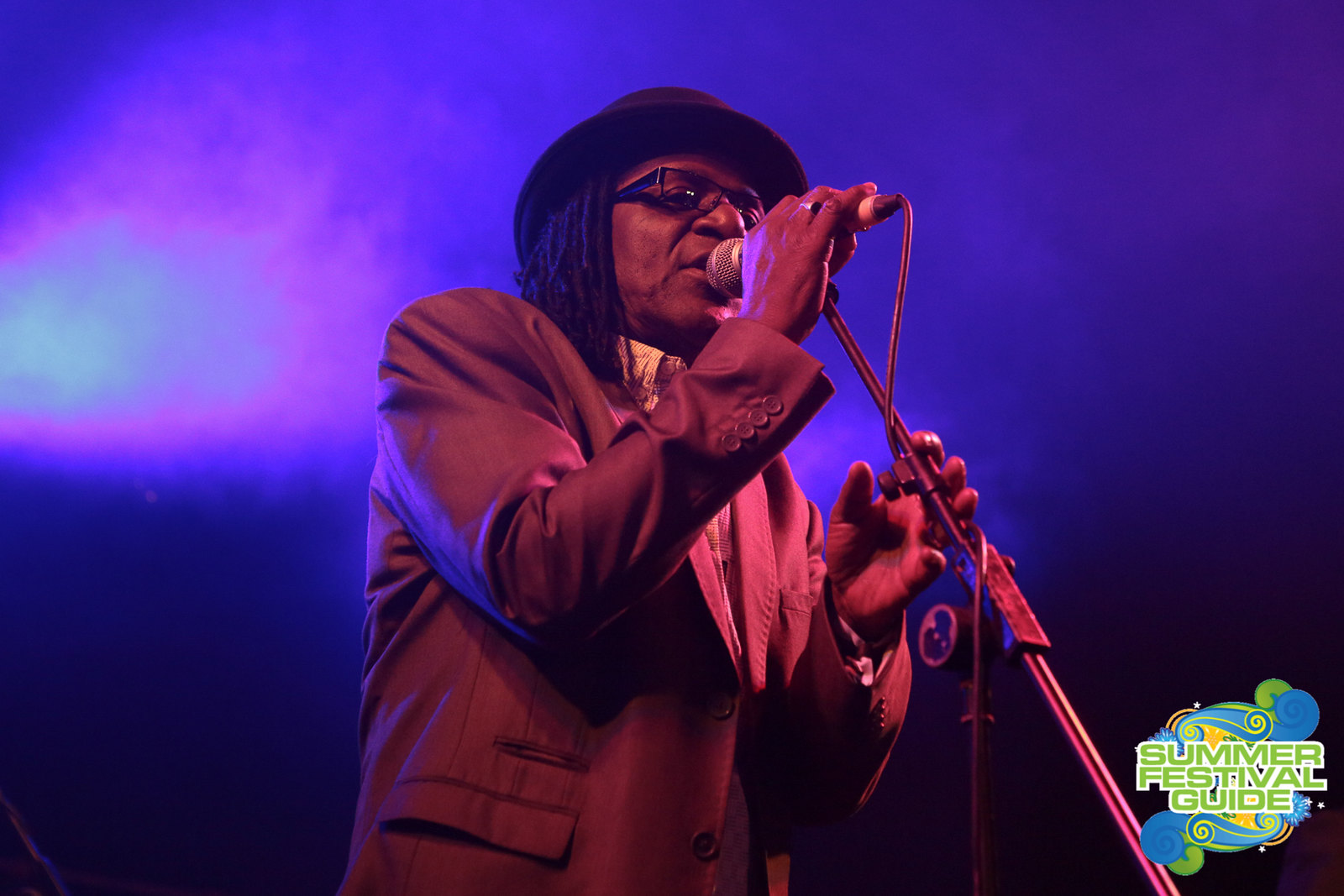 We kicked off Saturday with HIPICAT, winners of the 'Gigslutz PlayNoz 2015' competition, who brought the new day in with easy to process (for those hungover) Psychedellic rock. Luckily the rain for Saturday had abated, and throughout the day, the churned mess in front of the stage dried out enough to sit down and enjoy the weather. As mentioned earlier, before around 8pm the day had a completely different vibe to the night time, becoming more diverse musically, and more appealing to families with younger children. South African loop pedal artist, JEREMY LOOPS wowed the afternoon crowd with multilayered tunes consisting of massive harmonies, beatboxing, harmonicas and guitar arrangements that have taken him around the world, picking up bits of culturally diverse sounds and mashing them up into a impressive set. 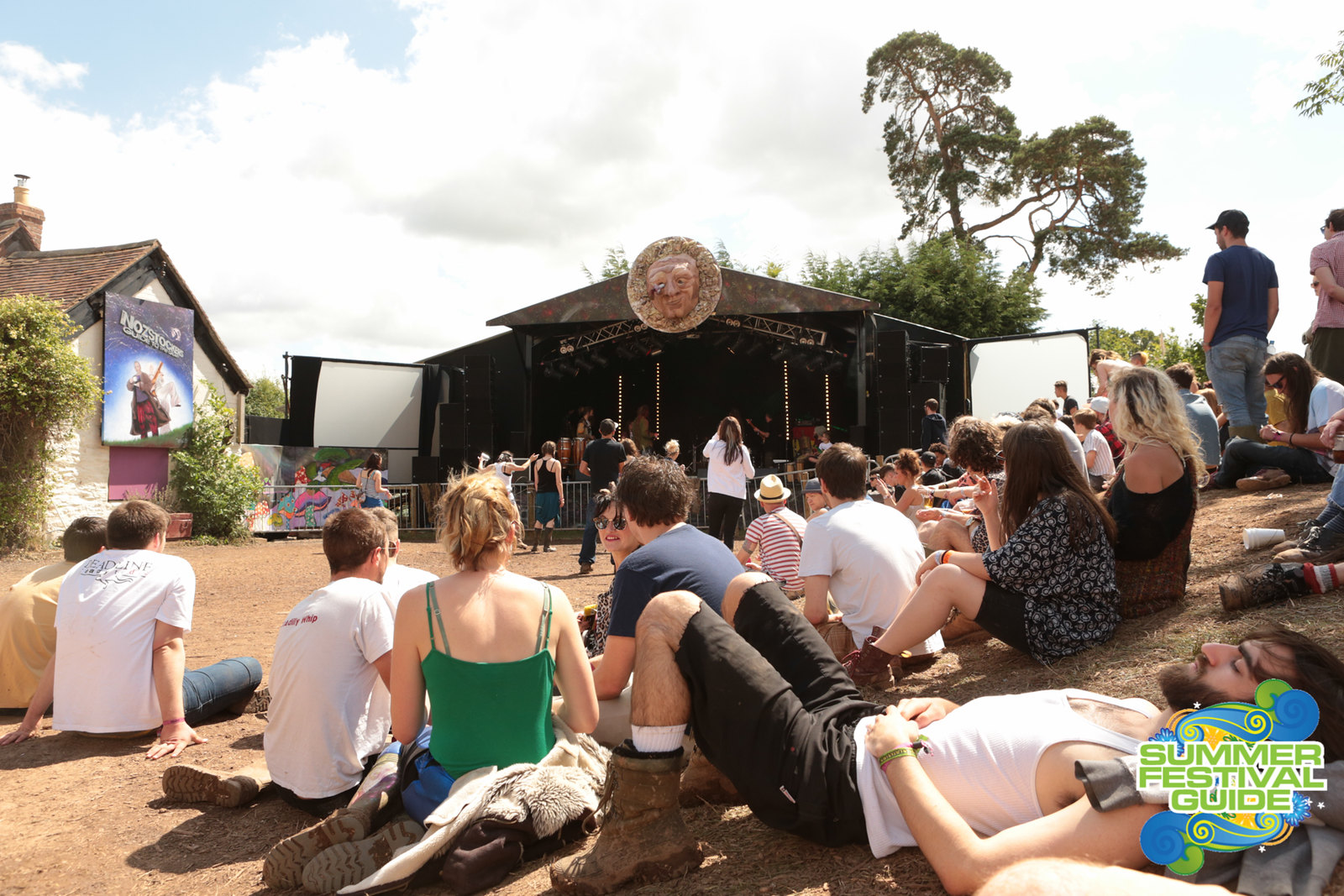 It has to be said about the hospitality of the NozStock press team, which was second to none. Instantly upon arrival, Damo and Nolly were on hand to answer any questions about the site or anything else, and organising a press picnic on Saturday was the icing on the cake. ROZELLE treated an unfortunately modest crowd to an expertly crafted set of Indie Rock tunes, and personally I thought they would have been better suited to a later slot than they were given, or been allocated a place on one of the bigger stages at a similar time. As the evening grew cold, back on the Orchard Stage SKINNY LISTER kept the crowd warm with their pub folk tunes, rallying mass dance offs, swaying, and mass cheers to a highly energetic set.

As are most festivals, NozStock is not just limited to stages for music, with the Wrong Directions Cinema Tent providing short and feature length films throughout the day, the Laughing Stock stage promoting comedy, and Bantam of the Opera & Velveteen Valley offering magic, theatre and late night cabaret to indulge in. Saturday's comedy headline came from Seann Walsh, who through his blend of current topics, anecdotes about living with his girlfriend and stand up comebacks gave the audience 40 minutes of non-stop laughter.

WU-TANG CLAN's set was flawless, apart from the fact that they didn't actually show up. Pulling out of the festival late last week, they had yet to provide a reason for this late and very unprofessional cancellation by Saturday. The disappointment throughout the crowd was noted, with expletives slamming Wu-Tang's to be found scrawled on toilets around the site. Fortunately DE LA SOUL was on hand to provide a heavy and incredibly well received set, expertly encouraging crowd response, easily drawing the biggest crowd of the weekend. 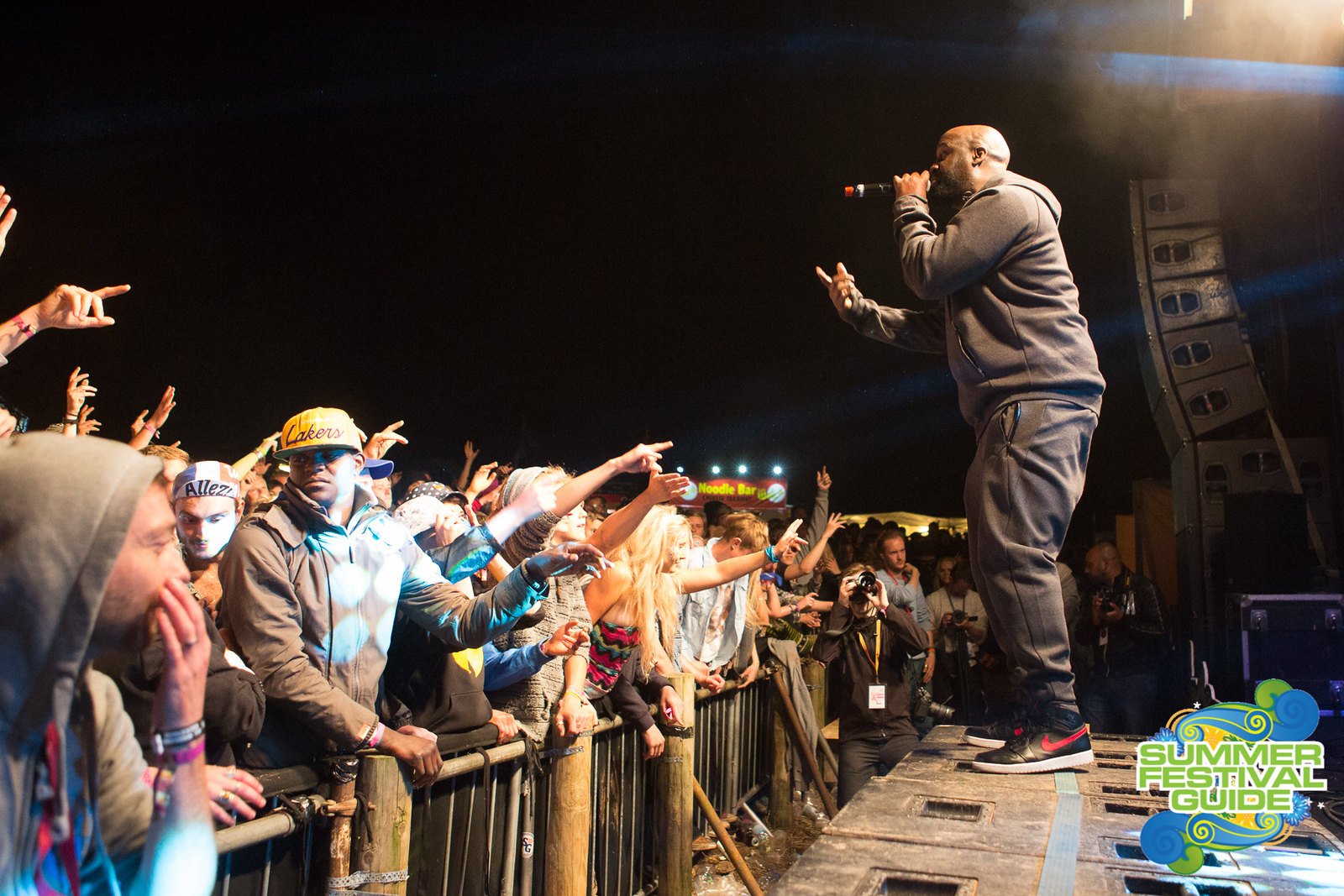 The clouds burst early Sunday morning, turning the just dried ground back into a sloshy mess. This however didn't dampen spirits, as the crowds were back out in full force come 4pm for TANTZ's high octane Yiddish dance music set. Combining elements of reggae, electro swing, power-klezma, rock, dub and upbeat insanity, Aaran Kent riled the crowd up into a frenzy between -and whilst- on Clarinet duties. TANTZ, despite the miserable weather were able to deliver a hard hitting set that was without fault, and one of my favourite of the day.

The eclectic mixture of artists over the stages was impressive, and NozStock seemingly taking pride in promoting a lot of local and nearby artists, giving the crowds the opportunity to take a punt on many bands that they may not have heard of. This is a great attitude to have when organising a festival, as the promotion of smaller artists is invaluable to those working as musicians.

MR B THE GENTLEMAN RHYMER graced NozStock with two sets on Sunday, one at the Orchard Stage, and a later set on The Bandstand. The well spoken ambassador of rhythmic lyricisms split his catalogue for the event, self notedly playing more of his pop ditties earlier in the day, before giving a more chap-hop set in the evening. MR B's one man quest to 'introduce Hip-hop to the manners of the Queen's English' went down a treat, building a solid rapport with the crowd throughout the duration of his set. We stopped to eat later by the Orchard Stage whilst BROKEN BRASS EMSEMBLE's expertly arranged set of swing tunes drew an active crowd, an act I couldn't have even imagined playing at the same festival as the one I had initially seen upon my arrival on Friday. The brass troupe from Holland would transcend from swing into funk and Hip-hop styling flawlessly, and then come straight back into big band arrangements as though it was nothing, with slick professionalism. 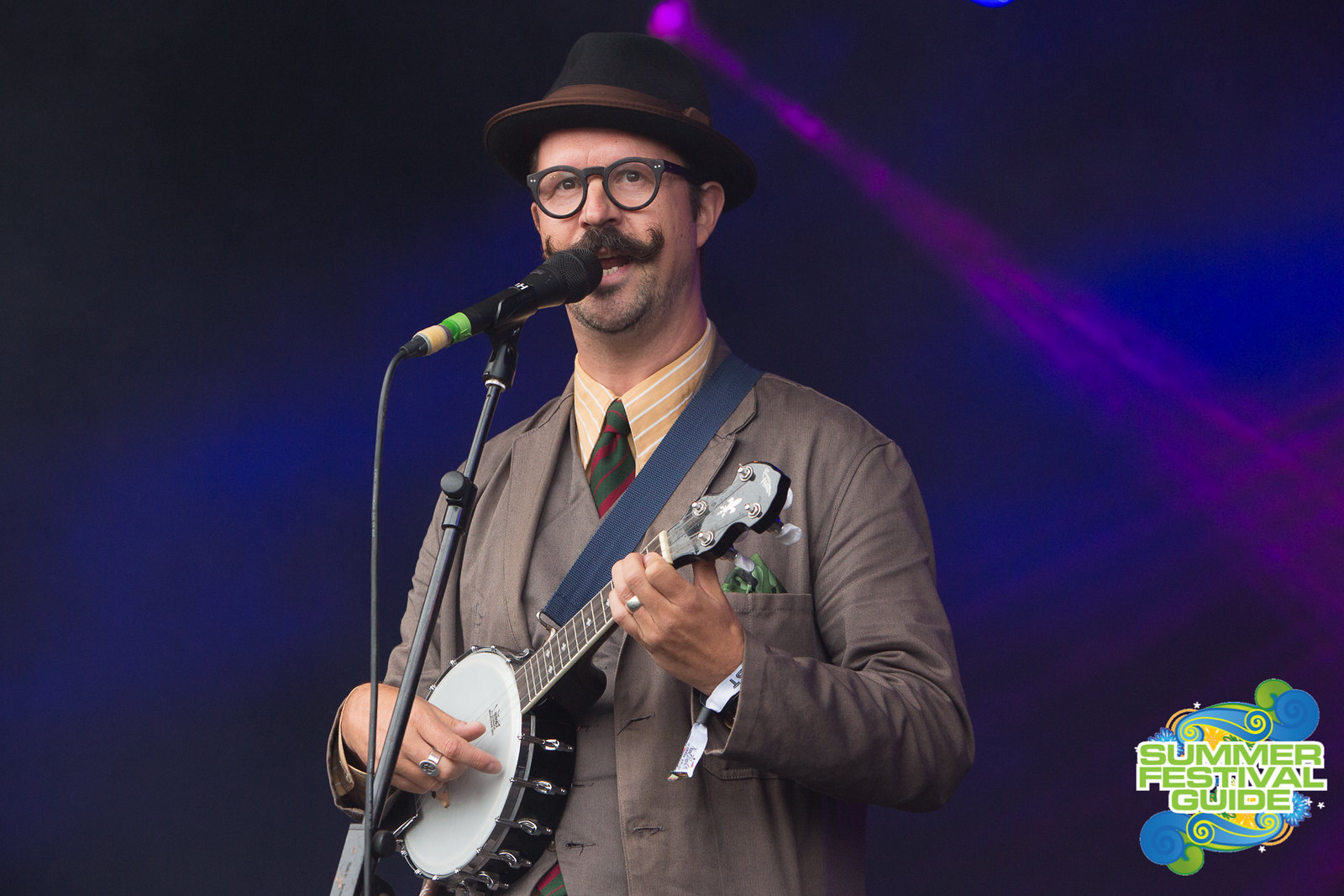 Sunday night drew to a close with Motown legend, MARTHA REEVES AND THE VANDELLAS on the Orchard Stage. Unfortunately getting off to a late and rocky start- Martha Reeves called a abrupt end to her opening number within the first 15 seconds of coming on stage, before complaining to the sound engineers and starting over again. Martha Reeves' voice sounded a bit strained throughout their performance, but held up well regardless. Appealing to an audience of older and younger fans, it's lovely to see that the Motown Veteran's music has crossed the generations and was being sung along to, danced to, and enjoyed by such a diverse audience. 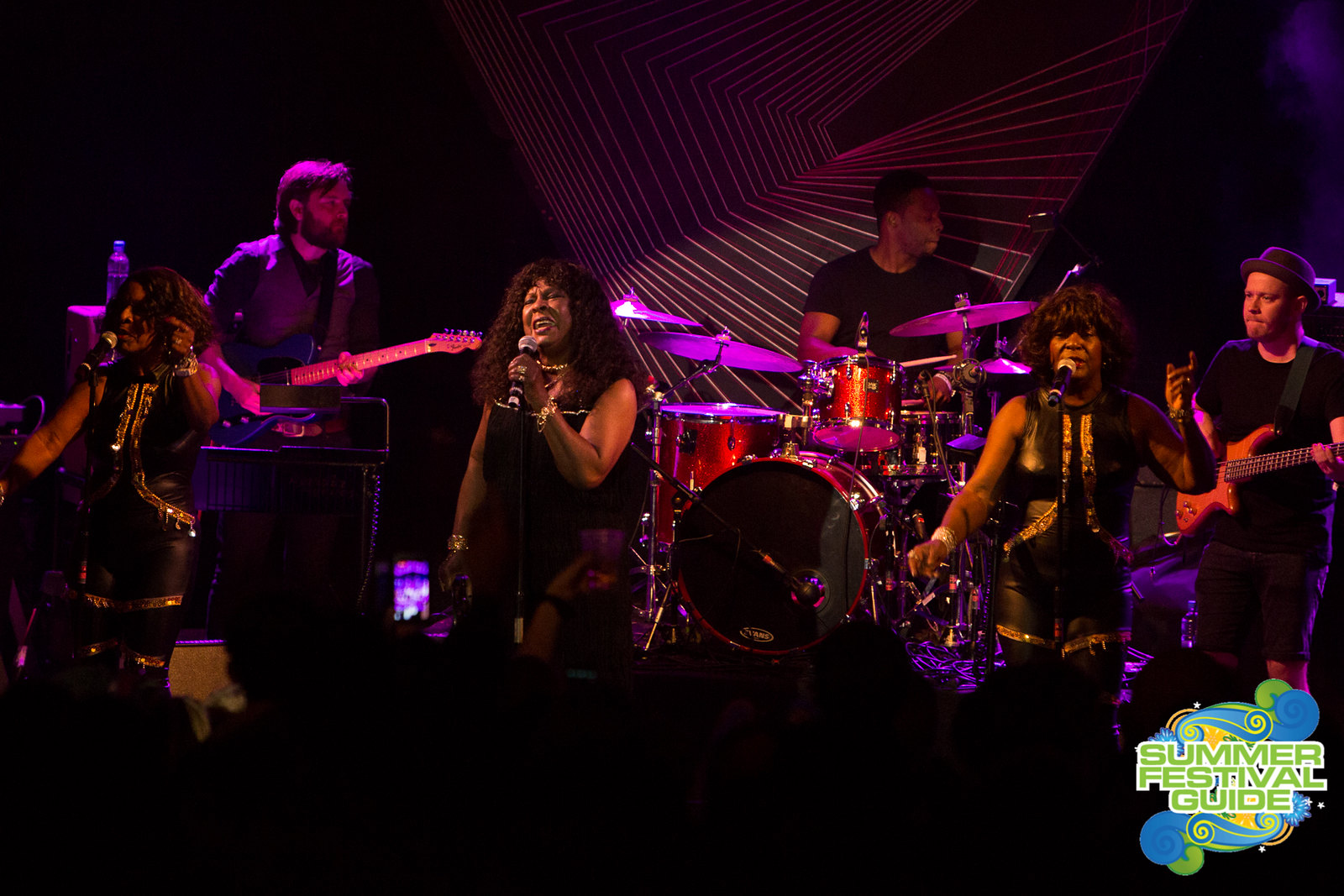 If I had to summarize NozStock 2015 in one word, it would be: Crazy.

Allow me to explain, and since being back for 12 hours (at time of writing) the 2 examples I have used to explain the unprecedented madness of this weekend to friends and family are: Firstly, the penultimate act for me this weekend involved me having to follow a guy dressed as a badger into a small room covered in zigzags where we had to dance to gain access to a secret stage, where I watched a three piece post-rock band who consisted of a Peter Serafinowicz doppelgänger and a mannequin torso on stage. And secondly, whilst out and about I saw a person dressed as a button being chased by a pack of kids with sparkly wooden spoons, attacking him under the command of a woman dressed as what looked like a salt shaker.

This weekend has been fantastic, and I would like to thank the team at NozStock for their hospitality and for such an unexpected experience, which I'd hope to experience again next year!