Wychwood festival returned for its 11th year in the beautiful Prestbury Hills of Cheltenham. Set on the famous Cheltenham Racecourse, the location boasts great transport and parking facilities, while still being on acres of well maintained luscious land. The friendly atmosphere brings in a mix of all ages with its main priority focusing on a family feel. With activities including arts and crafts workshops and improvised comedy, as well as an eclectic range of music on offer it is easy to keep every member of the family happy. Although it is family friendly Wychwood does not compromise on the festival experience. With headliners from the funk and soul Craig Charles to the legendary UB40 there is music for all tastes.

Friday kicked off to a dreary start, but the rain and grey clouds soon settled into a delightful afternoon of blue skies with the occasional cold wind. This gave people a chance to seek shelter in the smaller tents which hosted a range of entertainment from acoustic sets to clay modelling classes and comedy. The biggest bar of the festival was inside the Hobgoblin tent, where americana/ folk band, Loud Mountains gave a stellar performance on the Friday afternoon. With awesome guitar riffs, catchy rhythms and clever harmonies, Loud Mountains gave the crowd a heartwarming performance which all ages could sing along to and enjoy.

With a huge selection of drinks, local ales and food stalls on offer- there was plenty of choice for all tastes. Tasty pulled pork, nutella smothered crepes, ostrich burgers and Mr Whippy ice creams were a few of the many popular choices that Wychwood had to offer. Despite the festival being well tailored for families, the Pimms and Real Ale was also flowing, with adults enjoying themselves as much as the children.

After the impressive set from Loud Mountains, it was over to the main stage for ‘The Undertones’ who played a set made up of more songs than many bands write throughout their entire career. It was a punk rock treat with the Derry band choosing to let their music do the talking as they treated crowd to songs like ‘Jimmy Jimmy’ and ‘Teenage Kicks’. The latter of the two songs brought almost a sense of relief throughout the crowd, as they played that ever recognisable riff. Once they had finished, it was time to prep the stage for the headline act, which left just enough time inbetween to check out ‘Darlia’ over on the second largest of Wychwood’s stages.

Darlia– the Blackpool based 3-piece were really impressive. Walking around between the crowd, the words ‘Nirvana’ and ‘Kurt Cobain’ were mentioned so many times by onlookers, it gives a good picture of their sound. Sadly this somewhat draws away from the fact that the band actually have their own nailed-on balance of gritty guitars and catchy melody lines, which is almost an evolution of the Seattle grunge sound of old, without being at all tacky or cliché. Their set was really impressive with the song ‘Candyman’ being a stand out favourite.

It was now time for the headline act for the Friday and much like the range of people who attended this fantastic little festival – it could not have been any more different! It was time for the crowd to go wild for ‘Boney M’. With their back catalogue of disco tracks, they entertained the masses with the likes of ‘Daddy cool’, ‘rasputin’ and ‘brown girl in the ring’ and at one point even played a rendition of Bob Marley’s ‘No Woman No Cry’. Boney M were 110% fun from the word go and played with the professionalism of a group that has been together for just short of 40 years. Maizie Williams  was the only original member who performed in this line-up, her star quality such that she stood out like a diamond. A great choice of headliner from the festival and a job well done from Boney M. 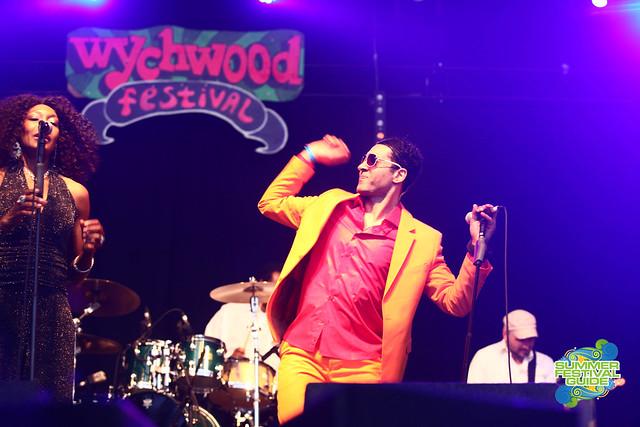 The weekend’s sun continued to shine down on Wychwood festival as the family-friendly vibes started up for the second day. The afternoon crowd which gathered at main stage for the Electric Swing Circus was a mixture of all ages and the band was the perfect fit for a such a varied audience. The vocal double act of Laura Louise and Bridget Walsh’s energy was infectious, and Guitarist Tom Hyland entertained the kids with his ringmaster attire and killer dance moves. But the band were not all about the visuals, as their ‘Electro-Swing’ music was Saturday’s real show-starter; a sound to match the diversity of the crowd with heavily sample based tunes backed up by solid double-bass lines and swing rhythms – it worked really well.

A small break on the main stage was enough time for the crowd to multiply ten-fold for one of the most recognisable acts of the past 30 years – both visually and sonically! It was the turn of the Proclaimers to take to the Wychwood stage. Identical twins Charlie and Craig Reid played through their back catalogue as well as throwing in a few songs from their latest album. Their set was hugely entertaining and was a singalong from the beginning to the end. At one point, Charlie read out a dedication they had received before bursting into ‘Let’s get married’ – The dedication proved to set the scene for a marriage proposal on the front row and she said yes! The duo completed the song and wished the happy couple the best of luck before Charlie said (tongue firmly in cheek) ‘ Just the one time, I’d like someone to say no and for there to be a little fight in the corner.’ After many a classic, they courteously wrapped their set up with ‘I’m gonna be (500 Miles)’ before making way for the headline act – UB40’S Ali Campbell, Astro and Mickey Virtue.

UB40 Hoodies seemed to be the clothing of choice for many throughout the day and this was reflected by the size of the crowd for the headline act. Accompanied by a saxophonist, trumpet player and trombonist, the band stormed through a set of their classics, whilst also throwing in some songs from their latest albums. Starting the proceedings with ‘Here I Am (Come and take me)’ they flew through a hugely entertaining set including ‘Red Red Wine’ and even an Elvis Presley cover! 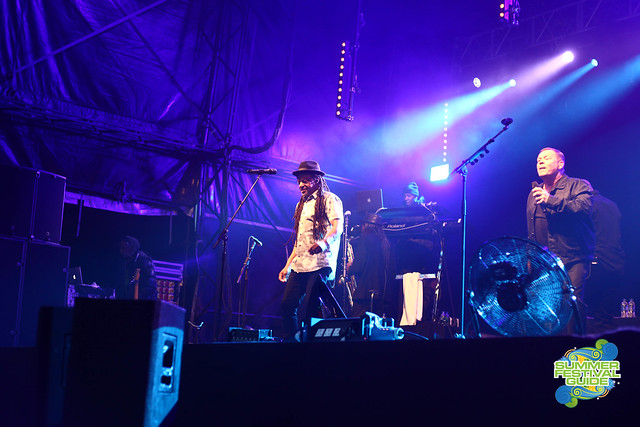 Sunday brought with it a tiredness to the crowds, but this was in no way reflected in the music with stellar performances from DJ Craig Charles and Rusty Shackle. Justin Fletcher also made an appearance on mainstage for the children and was received with much jubilation by the crowd.

The highlight though for Sunday, possibly even the entire festival, was the South African male choir group, Ladysmith Black Mambazo. Formed in 1960, this band certainly lived up to its platinum disc honoured status. With the ravishing harmonies and joyful atmosphere- every child to every adult danced in awe as the sun set amongst the Prestbury Hills. Gleeful children on parents shoulders waved their arms in time to the flawless rhythms of the choir. The uplifting experience worth watching in the flesh was definitely the best way to end a brilliant weekend. Despite the bitter cold of night, Ladysmith Black Mambazo had defiantly left a warm mark of Africa on Wychwood Festival 2015.