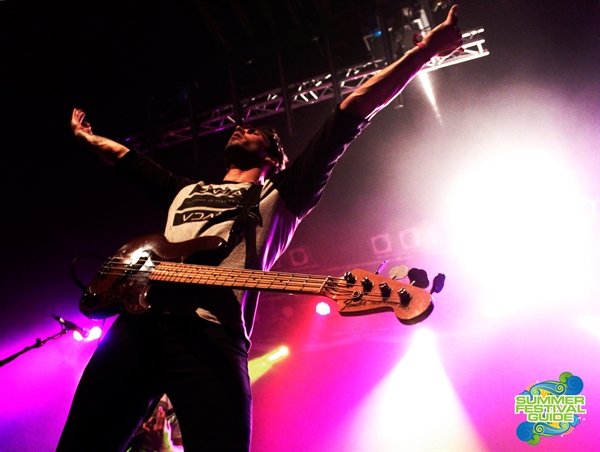 Although only having a fraction of the Slam Dunk South line up, Slam Dunk Scotland was a huge success. I don't think I've been that excited (or sweaty) at a gig in a long time. Not one band disappointed, every member of every band had explosive energy, jumping around the stage which only had a rub off effect on the audience who were simply brutal. I lost count of how many people were dragged over the barriers by security, even once over the barriers security were struggling to control them, resulting in a few of the security landing flat out on the ground (much to my amusement).

The stand out bands for me were definitely Woe Is Me, Memphis May Fire, Pierce The Veil and Four Year Strong. Having not listened to Woe Is Me or Pierce The Veil their live performances definitely converted me in to a fan. If you get a chance you should definitely YouTube Woe Is Me, my words will do nothing for their music. Their songs contain everything you could possibly ever want, from gorgeous clean vocals from Hance Alligood to some heavy bass from Brain Medley.

As for Pierce The Veil, if their stage set up wasn't impressive enough (have a look through the Slam Dunk Scotland photos) their interaction with the crowd was something that needs to be seen, they have such a strong fan base over here in Scotland which you could hear when they played "Hell Above", the crowd was singing along so loudly that you heard them far better than you could hear the band.

Finally, Four Year Strong – with beards almost as impressive as their music – completely blew away all expectations I had for them as a live act. With raging energy, the guys got the crowd so excited that I was told by security I had to stop taking photographs and move out of the photo pit because so many people were crowd surfing and having to be pulled over the barriers.

This having been my first Slam Dunk experience, I can without a doubt in my mind, say that I will definitely be attending next year. If you haven't got a ticket for any up and coming Slam Dunk dates, then I suggest you do. You can find what venue is closest to you here http://www.slamdunkmusic.com/slam-dunk-festival . Even if it sounds a bit too rough for you, I suggest you buy a ticket (ranging from £15 – £38, depending on the venue) and stand peacefully at the bar, watching the madness from a safe distance because Slam Dunk won't be like any other festival you're attending this year.