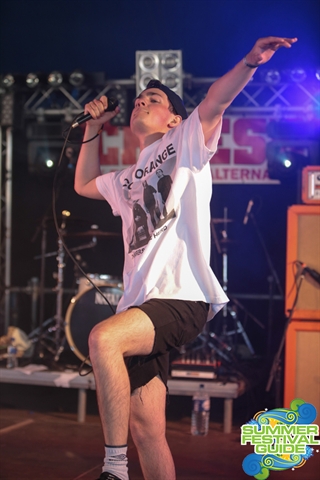 Having caught Boston Manor at 2000Trees opening 'The Cave' on Saturday, I caught up with Henry and Jordan for a chat about their plans, past 10 months, and what is upcoming for one of 2015's rising 'Pop-Punk' stars.

Hi guys. First of all, how has your 2000Trees experience been?

Henry: Yeah, really good- we've never been to this festival before and we're really enjoying it.

Jordan: As we're up in Blackpool, we've never come down here, we usually go to places like Leeds, Kendal Calling, but I was expecting it to be a lot smal ler than it is- I was really surprised at the size of the arena, and we've been having a great time.

Have you had enough time to see anyone?

Henry: Here and there, I didn't get here until yesterday.

Jordan: The rest of us have been here since Thursday, we watched CREEPER, on The Cave- where we played, and saw DEAF HAVANA last night and THRILL COLLINS- they were great, they're a cover band, and everyone was loving it.

Since your Driftwood E.P came out, (Available on Failure By Design Records) you've had a pretty non-stop schedule- What have the highlights of the last 10 months been?

Henry:  The last two tours we've been on (with Moose Blood and As It Is/This Wildlife Co-headline) that was awesome, they're both really great bands and they were fantastic tours to be on, a lot of people were checking us out for the first time but it was just a really great opportunity for us.

Jordan: It was a massive step up for us as we were playing larger rooms that were selling out- that's new for us, it's such a difference compared to last year, where we would be playing to 3 guys in a pub basement.

Henry: It's been quite a quick transition, really. Today is our first outdoor festival, so that in itself has been a new experience for us- it's definitely different, it's a whole different animal.

What has been your main influences in your songwriting process and have they changed while being on the road?

Jordan: I think when we're on tour we mainly focus on that, as when you're on the road you want to be concentrating on playing well and what you are doing each night. A bit of writing may happen on tour, and we know band who do that a lot; but when we come home, that's when we focus on writing.

Henry: Everyone thinks that touring is just having a laugh with your mates, it's great, but it is hard work- so you're busy with that. We're writing at the moment, but we haven't had to write on tour yet. In terms of inspiration, and not to sound generic, but it is just lots of stuff- it's constantly changing, When we write, we never set on exacting a sound, we just write what we want to hear, play how we want to play and let it evolve from there.

In a genre that can be so vicariously therapeutic for your audience and fans, and for fan loyalty and inclusion, what is your opinion on paying for meet and greet with bands?

Henry: It's fucking bullshit, anyone who does that is a dickhead- you're only able to be doing what you're doing because of the people who want to meet you, and you don't deserve to get paid just to grace someone with your presence, It's arrogant and I don't agree with it at all.

Jordan: Yeah, we're all human beings at the end of the day, and should be equal.

Henry: I know Avril Lavigne does it, and you have to stand two feet away from her, it's ridiculous.

The UK is having a bit of a moment for 'Pop-Punk' currently, and giving that you have had such a great year, what advice would you give younger musicians who are starting on their own musical journey?

Henry: Never aim to emulate another band, listen to as much as you can, and play how you want to. I see so many bands just trying to mimic other bands, from everything- their music, their aesthetic and their branding. You have as a person so many facets to your own creativity and your life, channel that into what your band is, instead of echoing it into what other bands have done. You'll feel more creatively fulfilled, and it'll stand you in better stead.

Saying that, what would you go back in time and avoid?

Henry: Get breakdown cover when you go to Europe. We were there for a long time.

Jordan: Stuck in a tent, on concrete.

Henry: For three days, the fourth in a hotel, but we were there for a while. It was stupid. Apart from that, nothing. It sounds cliched but I think of the mistakes we've made, we've learnt so much from them that it was worth making them in the first place.

Jordan: I kind of do believe that everything happens for a reason, and if it's got us to where we are now, then fair enough.

How do you spend your days off on tour?

Henry: They are a rarity, you have to make the most of them. On the last tour, we had two days off- The first we spent swimming, playing 3 on 3 American Football, watched American History X, and then went to bed. The next one was in Manchester, and we went to a trampoline park.

Jordan: It was a massive warehouse full of trampolines, you just jump around- it sounds a lot more fun than it is.

Henry:  Your reckon? I loved it!

Jordan: After 5 minutes, you're absolutely knackered, and you just want to sit down, but you cant, because there's trampolines everywhere!

Henry: Yeah, we did that then had a Wagamamas, we try not to just sit around, but sometimes you're just knackered and want to play xBox all day.

What are we looking forward to for the rest of the year- can fans expect new music soon?

Jordan: There is a new E.P recorded that we want to get out.

Henry:  Im going to say Autumn, that it will hopefully come out- that's what we're aiming for. We're really excited about it, and we're actually writing an album which we're taking a lot of time to do that. We have some show throughout the summer, and some other festivals. Hopefully there will be a tour in the late Autumn/early Winter time.

Jordan:  That could be in line with the E.P release

Henry: Yeah, there will be some shows for that, and then hopefully another tour- but that's all up in the air at the moment.

You can check out Boston Manor Here