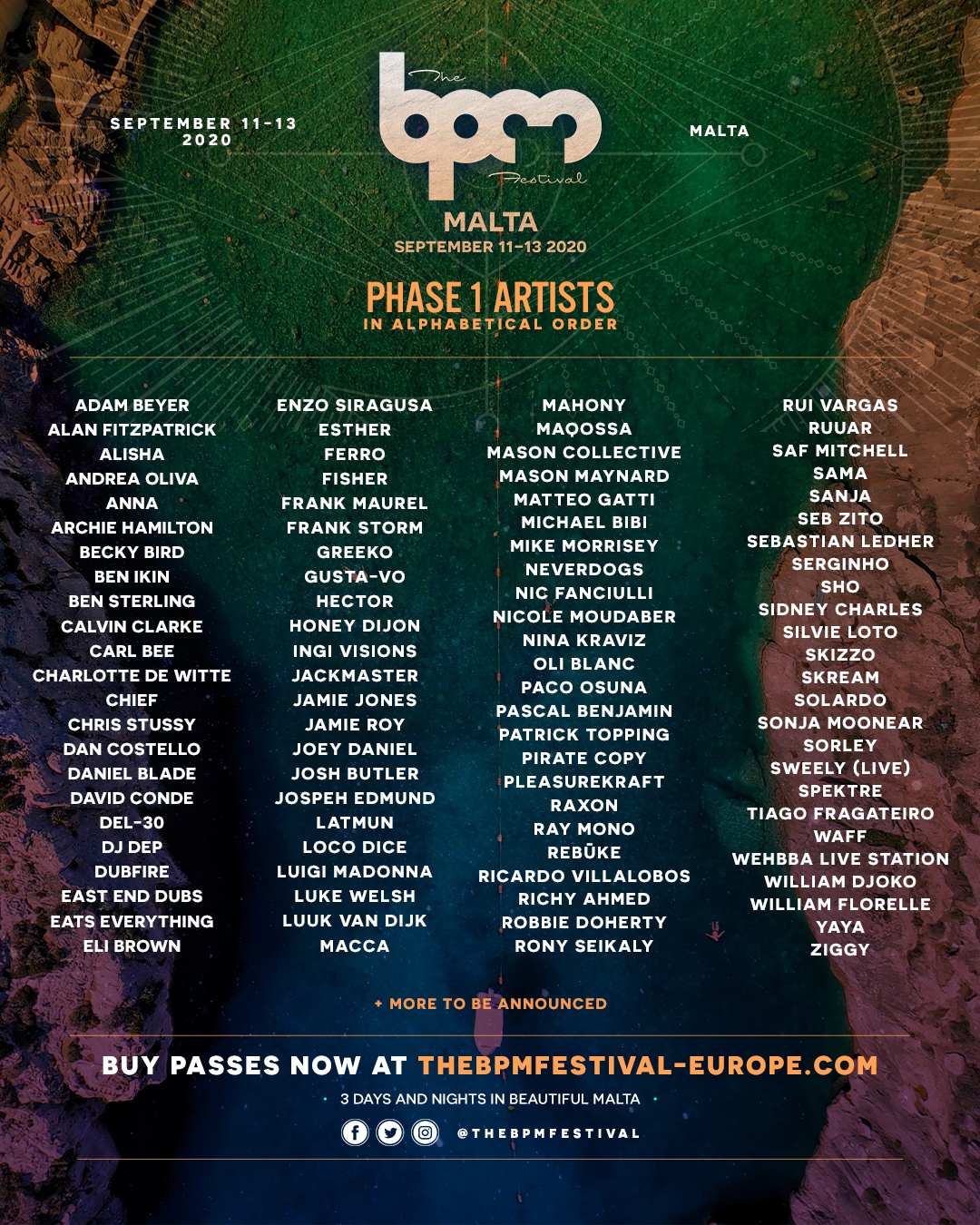 Globally renowned as the definitive underground festival experience, The BPM Festival is returning to claim the Summer 2020 crown with a special edition in Malta this September

Taking over the famed Uno Malta complex in the heart of the island between September 11th-13th, the global tour-de-force of celebrated underground dance favourites will set up shop for an unrivalled trip through the greatest sounds and pulsating parties that have come to define The BPM Festival across the planet. Expect unforgettable highs on sun-kissed verandas, eclectic lineups stacked with the best in house and techno as well as that indescribable BPM feel of escapism and unity all held in the true undiscovered gem of the Mediterranean clubbing scene.

Delivering the sort of lineup most electronic music fans could only dream of, The BPM Festival: Malta is set to play host to the likes of Adam Beyer, Charlotte De Witte, Honey Dijon, Jamie Jones, Skream, Richard Villalobos, Archie Hamilton, wAFF, Patrick Topping, Solardo, Neverdogs, Alan Fitzpatrick, Loco Dice, Fisher, Richy Ahmed, Michael Bibi, Nicole Moudaber, Eats Everything, Latmun and many more, boasting the biggest lineup of the summer across house and techno. There simply is no competition, the ONLY place to go is The BPM Festival: Malta.

From sunrise to sunset, expect standout daytime programming held under Malta’s unmissable sunshine skies (with over 300 days of sunshine witnessed each and every year on the island). As night falls, expect the greatest names in house and techno serving up sets that’ll live long in the memory – surrounded by a global community that’s been waiting for this very moment for landmark summer highlights.

Nobody could be as suited to bringing the summer party the world has been waiting for quite like BPM. The global festival titan has for over a decade brought the biggest and boldest festival experiences to the world, with a powerhouse lineup of the biggest names in house and techno filling their stages over and over again.

With the surroundings of Malta now awaiting The BPM Festival to its shores, you’re guaranteed a summer party like no other.

With very low rates of Covid-19 and incredibly detailed and diligent planning from the Maltese government, the country is now open again for tourism to many parts of Europe including the UK from July 15th.  All hotels, bars, restaurant’s, clubs and beaches are open with stringent procedures in place around social distancing and testing.

Full weekend tickets for The BPM Festival: Malta are on sale from now, starting from €169 with special VIP packages available from https://thebpmfestival-europe.com/

The BPM Festival: Malta sits as a part of a series of cultural events produced with the Maltese Tourist Authority, Visit Malta and 356 Productions – taking place in August and September 2020. Further events include Rhythm + Waves, Back In The Future and Escape 2 The Island – featuring the best DJs, artists and clubbing brands heading to Malta this summer.