Amongst these additions is one of the most complex and genre defying acts to come out of British rock and metal in the last decade, Bring Me The Horizon. This will be their first Donington appearance since the release of their savage beast of a fourth album, Sempiternal.

Oli Sykes said: We’re over the moon about playing Download. Before we got confirmed I had already asked for guest list as there was no way I was going to miss Linkin Park play Hybrid Theory in full. When we were offered to play on the same day and on the same stage just a few hours before, it was a no brainer. I’m crowd surfing to papercut, mark my words!

The band said of the announcement: We're thrilled to let the beast loose at Download again! We've got such great memories, we can't wait to play the tracks from our new album Hydra and retake the stage at Download. Give us rain, we will bring fire!

Twisted Sister, whose most famous visit to Donington came at Monsters of Rock in 1983, return to the scene to play Download 2014.

The band cannot wait to get back to their spiritual home in the UK: With this year’s performance at Download, Twisted Sister looks forward with great anticipation the celebration of the 30th anniversary of our worldwide, multi-platinum (6 million) album 'Stay Hungry'. Get ready Download because WE WANNA ROCK!

Other prodigal sons of Donington to return this year are Sepultura, the Brazilian Thrash Deities who played the first Download in 2003 are back with a vengeance in 2014.

Download has acquisitioned another ear-bleedingly good headliner in the ghostly form of Behemoth. The Godfathers of occultist Polish extreme metal will take over the Pepsi Max Stage on Saturday night.

Behemoth’s Nergal said: It's a great honour to be part of the bill for this year's Download. It’s one of the most prestigious Heavy Metal events, not only in UK but in the whole of Europe! This summer’s schedule already looks great, but with Download in it we are looking at something truly epic! The UK never disappoints! We owe you and we shall deliver!

Speaking of stage headliners… Since announcing Trivium to the line-up a few weeks back, the internet exploded with a complete outpouring of love from fans. And Download totally took the hint. Trivium will now headline the Zippo Encore Stage on Sunday, giving more fans the chance to experience one of their legendary sets.

Meanwhile, the insane amount of homegrown talent joining BMTH at Download 2014 includes our very own‘Prepubescent Jim Morrisons’ (to borrow a phrase from their biggest fan, Noel Fielding,) The Howling, who will bring their dashing neo-noir power-punk swagger to the Donington stage this June, while London post-hardcore outfit Zoax, will also return.

Having made their Download debut last year, the band is chomping at the bit to make their second appearance: It was one thing to play Download in 2013 so early in our career, but to be asked back again the following year is just a dream come true. That may sound like a complete cliché, but it's complete honesty. These opportunities mean the world to us.  We are aiming to make our set one that the audience will never forget. We are counting down the seconds to this day.

Fellow Londoners Press to Meco will also be bringing back their distinctive infusion of prog-punk-math-rock. Collibus– whose lead singer Gemma Fox adds another powerful and heavy voice to Download’s already-impressive metal siren wail – will also make their bow this year.

Collibus are thrilled to be sharing the stage with so many musical icons: It's an amazing honour to be playing at Download this year. It is a festival known the world over and to be playing on the same bill as so many of our heroes and musical influences will be awesome. Bring it on!

Some of the other young pretenders within touching distance of superstardom include one of Rolling Stone’s 10 New Artists You Need To Know for January 2014 Reignwolf who, along with soulful Missouri punks Radkey and prodigious homegrown shredders Bad Touch will bring some of the heaviest, grimiest blues rock in the entire musical universe crashing into planet Download this June.

So, with punks, bluesmen, metalheads and rockers already satiated by this latest announcement, it’s only fair that prog metallers get a treat as well, and what a treat it is as Monuments’ former FellSilent frontman John Browne will be joining his djent co-pioneers Sikth on the Download 2014 bill.

Browne was delighted to be reaching the apex of live British rock: After being a spectator for years, we're so stoked to finally play this legendary festival. Download is a festival that every rock and metal band aspires to play, and now were doing it. Thanks to Andy and Dave for believing in what we do. Get ready download, it's going to be chaos.

From new Download recruits to the distinctly battle-hardened – WWE and ex-WWF heavyweight Chris Jericho will be breaking down the Donington walls for a third time with his hard rock wrecking ball, Fozzy.

On their return, Jericho said: We are super excited to return to Download and play the MAINSTAGE for the first time ever!  One of our all-time favorite gigs was Download 2012 and we are looking forward to exploding your heads with pure Fozzy rock all over again this year! Do You Wanna Start A War, Download?  We hope so, because here we come!

Another experienced campaigner is Dan Reed, who will return in 2014 accompanied by his band, the Dan Reed Network.

For, the Dan Reed, the return to the major rock festival scene has been a long time coming: The band members and myself are deeply honoured and thrilled to be a part of this year's Download Festival, which marks our first major festival in over 20 years!

Alongside them come Skillet, the biggest Christian Metal band in the world ready to unleash their epic soaring melodies on the Download crowd for the first time.

Also receiving their Download baptism are 80s rockers Tyketto and Winger, and melodic post-hardcore merchantsWe Came As Romans. WCAR vocalist Dave Stephens concurred: We're beyond excited to be on this year's Download Fest. We absolutely love playing in the UK and it's especially amazing to be opening for Linkin Park!

American hardcore legion Defeater will also make an appearance while Cage the Gods will provide a healthy dose of sludgy, balls-out classic rock.

Zebrahead and Twenty One Pilots add an alt-rap twist to this year’s party, which will also play host to some incredible post-metal dreamscapes courtesy of international sensation Skyharbor. 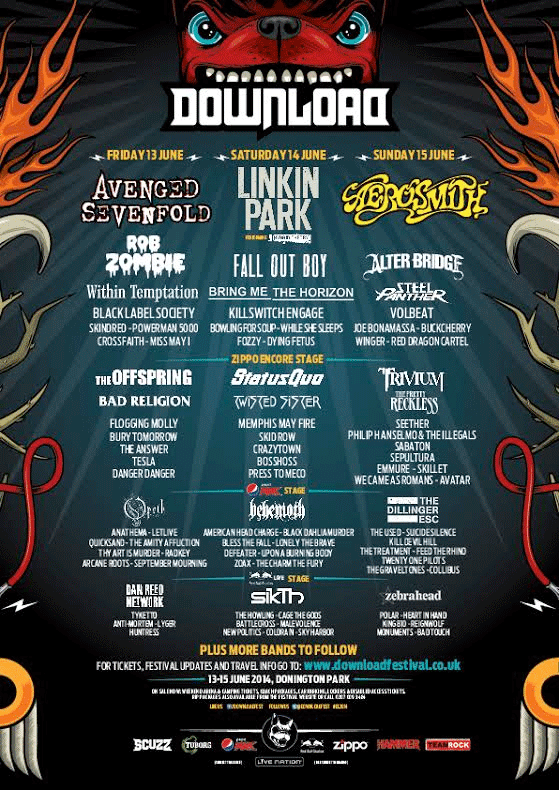