BLOODSTOCK OPEN AIR FESTIVAL is thrilled to announce that MEGADETH are confirmed to headline the Sunday night slot in 2014.

This will be the thrash icons’ first appearance at BLOODSTOCK.  In a career nearing 30 years and counting, MEGADETH has sold more than 38 million albums worldwide, earning five consecutive platinum albums in the US and numerous accolades along the way, including 11 GRAMMY® nominations.  The band’s latest studio album released in June, ‘Super Collider’, reunites firebrand frontman Dave Mustaine once again with guitarist Chris Broderick, bassist David Ellefson, and drummer Shawn Drover.  The release debuted at #6 on the Billboard 200 and #22 on the UK album chart and notched up Top 40 album chart debuts in a further 22 countries worldwide. 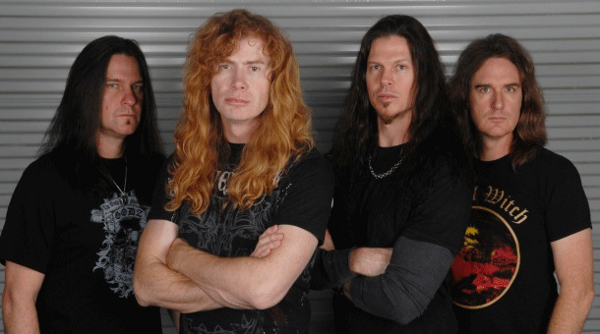 MEGADETH also recently released a live DVD of last year’s ‘Countdown To Extinction’ 20th Anniversary tour.  Check out this video of MegaDave and the guys thundering through the title track: http://www.youtube.com/watch?v=iYzUIKnGVvk.

MEGADETH’s founder, frontman and visionary, Dave Mustaine comments: “2014 is the 20th Anniversary for ‘Youthanasia’, and we are celebrating that by headlining the Bloodstock Festival in the glorious UK.  Every year MEGADETH and our UK fans get closer and celebrate another year of metal greatness together. This is the beginning of 2014…the best is yet to come.”

Tickets for 2014's event are already on sale at ‘early bird’ prices, £115 for a 4-day weekend ticket with camping.  Don't delay, as once the limited ‘early bird’ allocation is gone, it's gone, and tickets revert to full price.  Pick ‘em up now at http://bloodstock.seetickets.com/.

In other BLOODSTOCK news, the festival is very proud to announce their recent win at the LIVE UK MUSIC BUSINESS AWARDS 2013 in the ‘Best Festival (under 15K cap)’.  The second ‘Best Festival’ accolade in a row, after picking up 2012’s UK Festival Awards gong for ‘Best Medium sized Festival’!   Long may it continue!!

Already announced as Friday night bill toppers are New Orleans sludgemeisters DOWN. Joining them to headline Saturday night are black metal overlords, EMPEROR.  BLOODSTOCK will be the only UK performances for both bands.

In 2013, over 1.2 million fans from across the world logged on to watch the bands on the BLOODSTOCK main stage, via the Daily Motion live link.  This year was BLOODSTOCK’s biggest ever attendance at just shy of 14,000 and with a site licence of 15,000 we are expecting the 2014 event to sell out in advance, so don’t wait too long to get your tickets!

BLOODSTOCK will be held at Catton Park, Derbyshire on 7th-10th August 2014.  Keep up to date with the very latest info on BLOODSTOCK’s official sites at www.facebook.com/bloodstock and www.bloodstock.uk.com.