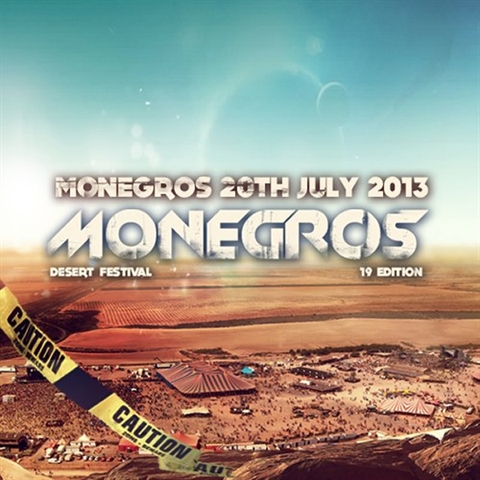 On top of the already confirmed artists such as the live shows of  Underworld, Public Enemy, Vitalic, Bloody Beetroots, Feed me and Djs such as Richie Hawtin, Marco Carola, Loco Dice, Luciano or the famous Berghain residents Marcel Dettmann & Ben Klock Monegros comes with another release of artists:

NERO (UK): Th british electronic music duo composed of members Daniel Stephens, Joe Ray will be added to the headliners of the 2013 edition and show Spain why they are one of the most repected Drum&Bass international group.

THE NEW M-NUS GENERATION: The label from Richie Hawtin has always had an eye for new talents. The Italians from Tale Of Us will distill some of their elegant and sexy tech sounds . They will be joined by the live of Matador which has blown everyone away with his EP “Kingswing”.

TECHNO MASTERS : Monegros has always supported techno in its purest form – In addition to the 40 Djs already lined up, the 2013 edition of Monegros will count with the vintage sounds of techno pioneers such as Surgeon, Dave Clarke, Ben Sims with an exclusive live for Monegros as well as Spanish pioneer Oscar Mulero.

Monegros goes back to its roots and reopens for the 3rd year the OPEN AIR Stage. Expect full techno, minimal and house. The Open air will close with a showcase of the infamous Barcelona parties Elrow and its infamous Rowshows  themed parties with the mighty Luciano and all the Elrow residents (De La Swing – Marc Maya – Mario Biani ­– Oscar Aguilera – Raul Mezcolanza – Toni Varga). Expect craziness, toys, inflatables, party costumes – ELROW takes the party wherever they go.

On the 17th June Monegros announce their final headliner