The sixth annual Camp Bestival came to a close this weekend, and married with ideal weather, a fantastic array of food stalls, and a friendly vibe, the musical line-up far exceeded expectations.

The action kicked off on the Castle Stage on Friday with the Jaipur Brass Band playing their infectious traditional Indian music among a splash of colour, followed by the impressive Kate Bush imitator Fake Bush.

The main stage action really picked up with a string of top performances; The Correspondents, Camp Bestival favourites, whipped the crowds up with their zany mix of hip-hop, drum 'n' bass and funk; The Farm took the whole field back to 1990 with a set including 'Stepping Stone' and the anthemic 'All Together Now'; and Irish rock royalty Ash played a fantastic career spanning set of hits including the wide-eyed innocence of early breakthrough 'Girl From Mars', 'Shining Light' and the all-out stomper 'Orpheus'.

Getting out of the welcome sun, we headed to the Big Top, and caught Max Romeo, late replacement for Toots & The Maytals, mid set. A raucous crowd lapped up the Reggae legends set, and the roof nearly came off for 'I Chase The Devil'.

Staying in the Big Top, London Grammar, the first of the weekend's true up-and-coming new bands, took to the stage, and the three-piece's beautiful and moody set was one of the highlights of the festival. Hannah Reid's vocals reminiscent of Florence Welch, and a musical undercurrent with hints of The XX and Massive Attack, their impending album is now a must buy.

Veering away from music for a while we stayed to watch John Cooper Clarke, and while the legendary Punk Rock Poet was in fine form, his set was slow to begin, blighted by a bleed of sound from the Bollywood Dance Tent – a disturbance which blighted many of the acts in the Big Top.
Friday's headliner was guitar icon Richard Hawley, fresh from having headlined Bridport's Electric Palace the night previous. We went back to the main stage with muted expectations, and it made what followed even more special. Hawley's languid and soulful vocals, and sublime guitar, made for a low energy but fully engaging set, with 'Tonight The Streets Are Ours' a real festival moment.

On the way back to the tents we stopped off for a late night treat in the form of the dark and humorous Filthy Boy, the young group show a sound and style beyond their teenage years, and single 'Waiting on the Doorstep' was a particular stand-out.

Saturday, as usually is the case, had the strongest line-up. The day began with kids' hero Mr Tumble delighting the packed main stage field, followed by the Horrible Histories show. Using the kids entertainment as an excuse to explore the other entertainment and food on offer, we took in some of the extreme sports in the Freesports Park; walked through the Dingly Dell; cleared our heads with fresh coconut water; and proceeded to eat brunch at the incredible Young British Foodies. The tent was a popular stop for meals at any time of day, offering everything from smoothies and waffles, to sushi and venison burgers.

Saturday's musical offerings kicked off with american songstress Lissie, whose bluesy LA rock was the perfect accompaniment to the rapidly rising sun.  Next up was one of the sets of the weekend. Gabrielle Aplin, who last year played the bandstand stage at Camp Bestival to around 100 people, has jumped into the public eye following a Christmas advert hit, and subsequent number 2 album. The 20-year-olds main stage set included a breath-taking cover of 'The Power of Love', as well as hit singles 'Panic Cord', 'Home' and brilliant cover of the Fleetwood Mac favourite 'Go Your Own Way'.

Camp Bestival favourites The Cuban Brothers were next up, mixing hilarious quips from frontman Miguelito with high energy latin-flavoured party funk. The rapidly growing Castle Stage crowd were at once laughing hysterically and dancing madly!
Spinning his wheels of steel, Grandmaster Flash took the generation-bridging crowds hip-hop, jazz, rock and more.
The church silence allowed for a break from the searing heat, and on the way back to the tent from Grandmaster Flash, I managed to catch the last few songs from country blues newcomer Valerie June. The Tennessee native performed some of the fantastic roots-inspired tracks from her brilliant debut album 'Pushin' Against a Stone'.

Returning to the main stage, Camp Bestival's 'special guest' Mark Owen mixed songs from this new album 'The Art of Doing Nothing' with Take That classics, including what has become his signature tune 'Shine'. Surely a highlight for many of the mums in the field!
Heading to the Big Top for the last time on Saturday, Clean Bandit produced a set of set of unique dance music, incorporating huge club beats with classical string parts. The Cambridge quartet had the crowd eating up every track, and seem destined for big things.

Closing off the main stage on Saturday, Kid Creole & The Coconuts return to the Camp Bestival stage for a 30s and 40s inspired party set, channelling the spirit of Cab Calloway, and leading into main headliner Levellers.
The festival favourites produced a set of high-energy folk-rock, with 'Beautiful Day' a soundtrack anthem for a sun-drenched Saturday.

The Castle Stage kicked off with cider swilling old boys The Wurzels, and was followed by the shanty-singing Skinny Lister, who joined the crowd in a drink and a good dance.
Sunday afternoon really got going and went back to the 80s with Nik Kershaw, playing hits including 'The Riddle', 'I Won't Let the Sun Go Down on Me', and 'I Am The One and Only', the hit Kershaw wrote for Chesney Hawkes. Heaven 17 followed Kershaw, performing a rapturously received set kicking off with '(We Don't Need This) Fascist Groove Thang' and also featuring 'Penthouse and Pavement', and huge hit 'Temptation'.

Camp Bestival favourites Dan Le Sac vs Scroobius Pip return for their first performance for three years in the Big Top next. Their unique combination of Pip's spoken word/rap/poetry and Le Sac's bass and beats went down a storm, although the set was slightly marred by the Bollywood bass once more.
Before closing act Labrinth, we stayed after Dan Le Sac v Scroobius Pip for comedy headliner Alan Davies, and support from Ian Stone. Stone's near-the-knuckle repertoire was well received, and Davies' hilarious parental anecdotes were the perfect material for 'family-friendly' Camp Bestival. 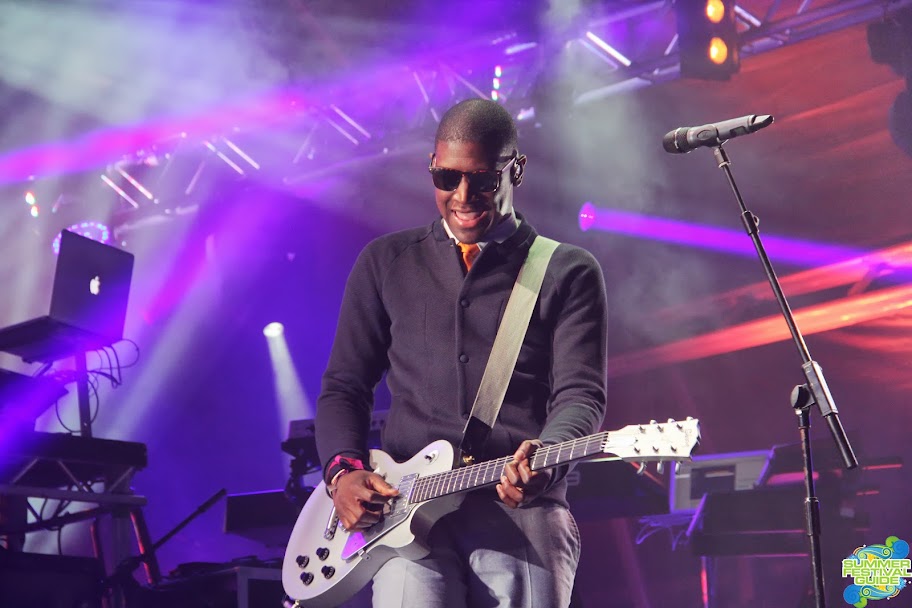 The finale for the 2013 event began on the Castle Stage with Labrinth, – Sunday's musical headliner – who delivered a surprisingly good set featuring singles 'Earthquake', 'Beneath You're Beautiful' and a cover of Tinie Tempah's 'Pass Out' (a track Labrinth collaborated on). The Castle Field was at full capacity at this point, awaiting the always popular firework spectacular, and the show didn't disappoint. Son Et Lumiere's show, projecting a wonderful animation based on the festival's 'Around The World' theme, was brilliantly interspersed with a pyro display to match any other.