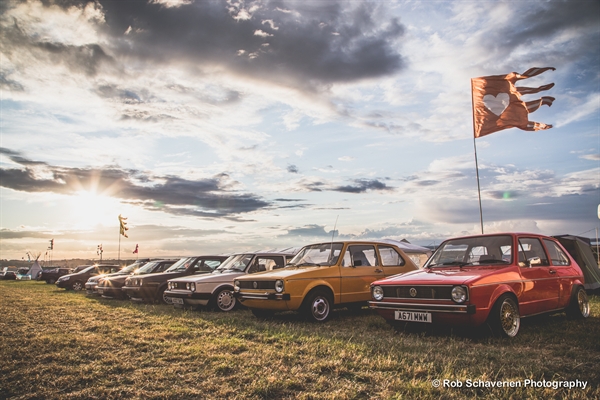 V-Dub Island Festival – The Summer of Love, took place last week, running from 14th-18th August, at East Afton Farm, the former site of the legendary Isle Of Wight Festival that started in 1970.

Now in its fourth year the festival is still cutting its teeth on the circuit but growing in popularity each year particularly with VW lovers.  Previously held at the County Showground,  the new site with its views over the Solent to the New Forest and Lemington Spa, as well as panoramic views of the Island and coast line are worth the trip alone. But if like us, you like a bit of nostalgia, partying on the famous site where the likes of Jimmy Hendrix, The Who and The Doors all played together really made it that little bit more special.

V-Dub Island is unique for many reasons not least it community spirit amongst its organisers and supporters. It is an affordable and family friendly festival, where even dogs are welcome and life on the road is celebrated by Volkswagen enthusiasts, travelling from all over the country and abroad. Campervans, beetles and VWs of all shapes and sizes filled the site creating a beautiful scene from the surrounding hills, with thousands in attendance who come to show, view and even sell their beloved motors.

This year the campsite opened the week prior to the festival, allowing families to camp out under the stars for a few extra nights at ‘Carry on Camping’. And yes there were showers, and even a very helpful shuttle service taking you across the Island to play tourist or just to grab some essentials for just £1 as well as music in campsite café/bar each night.

Created by VW enthusiast for VW enthusiasts, the festival is first and foremost a VW show but it still boasts a great line up of music. Three stages played host to hundreds of bands and artists,  including highlights from  Rob Da Bank, and the Dub Pistols, The Skatonics, Jess White, Save the Dinosaurs and tribute bands Wight Floyd and the Jimmi Hendrix Tribute to name a but a few.

Other entertainment came in the form of Cabaret performances by Painless Parties, fun fair attractions, a giant water slide with extra bubbles and even a best dressed pet competition.  Our personal favourite was the Sheep Dog (Pictured). And that’s just for the big kids, the organisers make sure it is as family friendly as possible with magic shows, swings, story time, Bushcraft and Lego tents and a beach, known as Fantasy Island in the middle of the arena for all to enjoy.

Thursday saw the main arena open up to hundreds of Festival goers checking out the trade stands and entertainment while Friday saw hundreds more arriving in an array of colourful campers just in time for the Soap Box Derby trails, a terrific traditional event for all the family.

Saturday played tribute to sites famous beginning with a Summer of Love 1970s fancy dress theme, as well as the annual drive out and run to the surf where hundreds of camper vans, Beetles and VW Transporters drive in convoy to Colwell bay, famous for its views and surf. We spotted headline act Rob Da Bank in his camper amongst the crowds joining in the fun ahead of his Sunday night set, which saw the main stage area rammed with people of all ages dancing the night away.

We loved this cute family focused festival, it’s totally chilled out, and you can do as much or as little as you like and still soak up the atmosphere from the camp site or take part in in adventure activities on the Island minutes away. Can’t we live in a field filled with beautiful Campervans and beautiful people forever?