Unlike a lot of music festivals; such as Reading or Download, NASS festival doesn’t entirely revolve around the bands or artists that are performing. A large base of its popularity comes from its Extreme Sports involvement, with competitions for skateboarders and BMXer’s taking place throughout both Friday and Saturday. Additionally, freestyle motocross demonstrations along with rollerblading were being eagerly watched by many at different venues scattered around the site.

As the first full day of the festival started, the intense heat brought out everyone from their tents and caravans onto the walk paths of the festival, the streets were packed with teenagers dressed in vests and shorts trying to resist the extreme heat of the day.

The first highly popular act for Friday’s line-up where the English four piece rock band from Essex: We Are The Ocean. The band put forward a confident performance involving such popular songs as ‘Bleed’ and ‘Follow What You Need’. Lead singer, Liam Cromby, engaged well with the audience; which despite not being huge in numbers seemed impressed and entertained throughout the set.

Next up, the Youtube originated sensation George Watsky, best known through his video ‘Pale kid raps fast’ took the stage. He displayed confidence and talent through his remarkably fast paced rapping which wowed the audience, arriving in numbers slightly larger than those who attended We Are The Ocean. As Watsky’s performance went on, he later decided to interact with one particular member of the audience by singing Happy Birthday to them, this gesture was received well as the crowd cheered and encouraged him on. George then went on to perform a deeply emotional song of his known as ‘Tiny Growing Screens Part 2’ which seemed to connect with the audience immensely, the use of Watsky’s rapping mixed with the powerful singing of his female partner fused well together to create a highly entertaining performance.

After a short break, the well-received DJ’s MONSTA took the stage, exciting the audience with their blend of dubstep and electronic dance-like music. Their performance was heard throughout NASS with their overwhelming bassy music which succeeded in attracting a relatively large crowd. As their performance went on, hundreds of supporters turned up, highlighting on the popularity of their performance.

After a lengthy performance by MONSTA, perhaps the second most anticipated act of the night were about to perform. Hadouken! With no great surprise, attracted a huge crowd, the largest so far, performing with extreme confidence and class. The lead singer, James Smith alongside his girlfriend and the other three members of the band created an intensely exciting atmosphere through their music, which everyone seemed to enjoy! As the act went on, James ordered the main crowd to form the ‘wall of death’ which the crowd obliged into doing, only adding to the craze of the moment.

As the crowd gathered in anticipation of the Headliner of Fridays events, Katy B took the stage; she undoubtedly brought in the largest crowd out of all of Fridays acts and definitely gave a performance worthy of applause, which the audience did, many times. With the involvement of the backup dancers being introduced by Katy, the crowd felt more connected with her, as well as her shout out to ‘all the ladies in here’ generating a huge bombardment of screams from the crowd. Her performance seemed to not only keep the audience on their toes, but also up in the air as multiple giant inflatable balls where launched across the crowd. She closed her set with her most recognised song, also her first single: ‘Katy On A Mission’ which got the whole crowd singing along. Needless to say, the atmosphere was amazing and every member of the audience involved seemed to have a brilliant time. 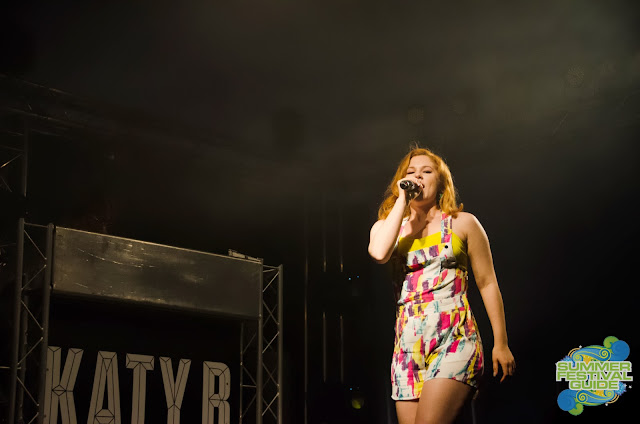 Saturday started much the same as Friday did…with an intense amount of Heat. In fact the weather for the entire festival was superb as there wasn’t a drop in the sky, although I’m sure by the end of a rave with Skepta or Zane Lowe some people would have been begging for a cold shower to come down from the sky.

The hugely popular English rapper Skepta kicked off the evening with an intense and powerful performance, dressed in his all white clothing he stood out from the background, creating an illuminating appearance. Skepta’s voice was clear and powerful as he shook the ground of NASS getting everyone up on their feet and involved.

Next up, the British rock band from Cardiff Kids In Glass Houses rocked the stage with such popular tunes as ‘Sunshine’ ‘Undercover Lover’ and ‘Matters At All’. Their supporters came together to create a great atmosphere as Aled and his band rocked on through the evening.

The extremely popular Radio one presenter from New Zealand Zane Lowe came on and immediately summoned everyone to their feet as he shouted ‘If you’re sitting in a tent then what the F#*k are you doing?!’. As his set began, a huge crowd gathered, one of a similar size to Hadouken! His performance included his own DJ set as well as remix’s of club classics, for example he did a cover of one of Pendulums songs, which brought a huge cheer of recognition from the crowd. It seemed that all those involved in this experience had an exciting and unforgettable time.

Finally, as the darkness started to loom around the site, the concluding headlining act was about to hit the stage, who, by extreme measures, attracted the largest crowd as the main stage was packed with people. Before he made is appearance, the DJ paid tribute to such other rappers as 2 Pac and biggie smalls; demanding that everyone put ‘one finger in the air’ and then ‘turn them ones into two’s’ in tribute of 2 Pac. As the night went on and Nas made it to the stage there was a huge eruption from the crowd as he entered. The atmosphere was intense and full of supporters eagerly cheering him on. Once again, as during Katy B, huge inflatable balls bounced across the top of the crowd, just to add to the already intensely exciting atmosphere. The performance could be heard throughout the entire site, it was safe to say that Nas gave the people of NASS what they wanted, an incredible performance. 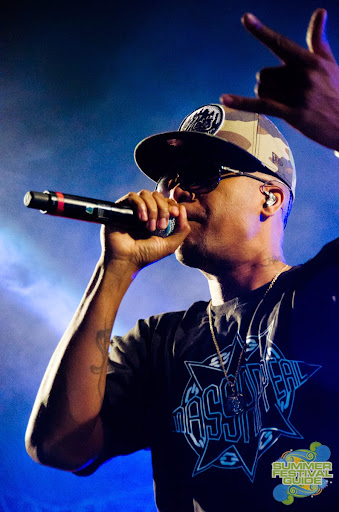 To sum up, the performances at NASS, whether they be from a skateboarder, BMXer or whether they’re headlining on the main stage; the quality and enjoyment you get from each and every performer creates an environment which you don’t ever want to leave, the effort of these performers this year made NASS 2013 a festival to remember, so don’t miss it next year!