Known as the ‘Merrie City’ in the Middle Ages, Wakefield hasn’t had things quite so rosy in recent times with the decline of the British coal and manufacturing industries in the 1980s. With new investment in infrastructure coming into the city over the last decade, could Long Division help the city be ‘Merrie’ again?

Arriving in the city, there’s clearly a lot of potential with many striking but run-down buildings in the centre. In fact, the first stop of the day was at one of these success stories, Unity Works, a Grade-II listed building dating back to 1867, recently restored into a multi-purpose event venue by a co-operative of investors. In fact the restorations to the main 700 capacity main hall are so recently completed, there still a faint whiff of paint in the air.

With Candy Says pulling out of the festival due to a broken down car, Tuff Love was an alternative in the Unity Works Minor Hall, billed by festival organisers as music for driving. Starting at a slow tempo, introspective plod, the Glaswegian trio were unpolished, but progressed into a more jaunty sound as the set progressed, with the vocal harmonies of the guitarist and bassist mixing well over the fuzzy bass. They deserved some sympathy for the sound issues they experienced, including repeated feedback, amp problems, then a broken string which necessitated finishing the set on a borrowed guitar. 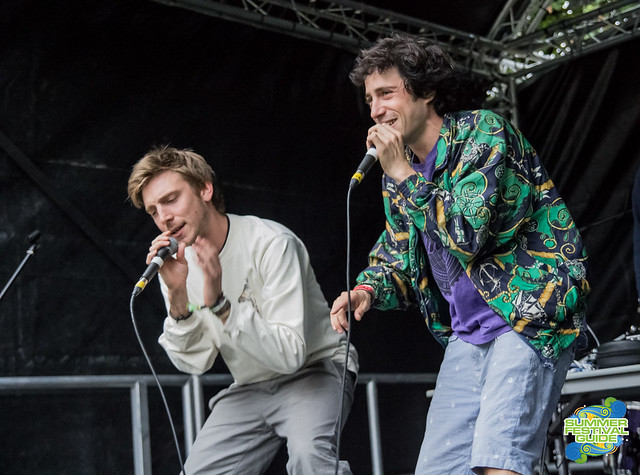 After a few tours of the surrounding blocks trying to find the venue, Juffage took to the stage at Westgate Chapel. When he asked, “Are you guys ready for some pop songs?” this was assumed to be sarcasm, considering his proclivity towards complex, layered math rock, however his set was definitely accessible. It felt as though Juffage was delivering his own feverish sermon at the chapel; with his voice soaring and intensity building up in each song, the set was absolutely captivating and technically excellent. Juffage clearly takes his music seriously, lamenting throughout his set that the sound set-up lost the top end of his vocals, but his perfectionist tendencies paid dividends as his slot was one of the highlights of the day.

Back to a packed Unity Hall, Post War Glamour Girls got underway with ‘Sestra’, the brooding album opener from ‘Pink Fur’, clocking in at over six minutes long. The Leeds quartet showcased new material, ‘Pseudo Macho’, ‘Felonious Punk’, ‘Wax Origins’ and ‘Count Your Blessings’, with ‘Felonious Punk’ and ‘Wax Origins’ standing out as potential highlights from their next album. Final track ‘Gustave’, from their latest EP perhaps demonstrates the best qualities of PWGG, with James’ harsh, growling vocals countered by Alice’s serene tones and ending in a frantic jam with both vocalists kicking over mic stands.

“Just play the tunes Gruff and do that voodoo you do”, shouted a member of the crowd during the delay to the start of Gruff Rhys. The Super Furry Animals lead singer’s solo set was halted for about 15 minutes with problems getting the accompanying background video presentation to work. Eventually, Gruff nonchalantly strolled on stage with a faux-wolf-head hat and a muppet-style puppet of the Welsh explorer John Evans, whose story of sailing to America to discover a tribe of Welsh Indians was recounted. Gruff’s acoustic strums combined with his soaring, echoing vocals were entrancing and backed up the grandeur of the storytelling.

Next up at Players Bar were The Sunbeams, although upon entering, seeing the drummer playing topless almost resulted in seeing what else was on nearby! The Sunbeams are a young, loud and in-your-face Leeds trio, and when a member of the crowd shouted “you’re like the Cribs”, although this displeased the band, they weren’t too off the mark. With catchy riffs and heavy drums backed up by boundless energy, the band really clicked in the songs which involved backing vocals from the guitarist. The young but small crowd were delighted by their high tempo, angular guitar riffs and screaming vocals.

Under an absolutely huge spinning disco ball in the trendy Havana bar, Chorley’s Then Thickens took to a makeshift stage on a dance floor. A project started by Kong’s Jon Lee Martin, the band pumps out a vibrant, foot-tapping sound and deserve their recent plaudits. The band’s sound didn’t suffer appreciably from the absence of co-vocalist Helen Thorpe, with their snarling guitars and funky riffs making their tracks sound even better live than on the album. 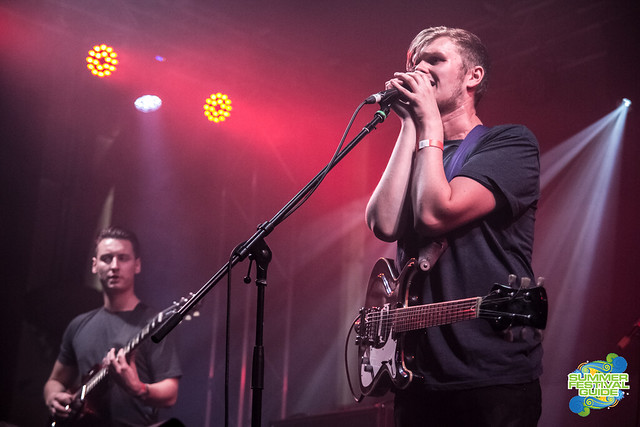 Next door in Mulberry, Salvage My Dream’s bassist quipped “This is the furthest north I’ve ever been in my life” to the small crowd. Travelling from London on the National Express early the same morning, the band had quite a trip, but their usage of violin differentiates them and works well with their jangly guitar hooks.

“This is our first ever daytime gig in a graveyard with no alcohol” declared Too Many T's at the outdoor stage in the Orangery. The lack of alcohol available at the Grade II listed Orangery did affect crowd numbers throughout the day but Too Many T's energetic raps harking back to the early 90s 'golden age hip hop' was a festival hi light. With fun rhymes over funky beats, there's definitely a nod to Beastie Boys and Jurassic 5. Free stickers too!

Back to the Unity Works Major Hall, I Like Trains came into full swing, entrancing the crowd with a setlist mainly from their back catalogue but also showcasing a new track. Their fantastic instrumentals were displayed in ‘A Rook House for Bobby’, building into an epic finale. Introspective and contemplative, the band made the grand seem effortless, barely breaking into a sweat over their 45 minute set.

A peculiar fusion of Math-rock with American Punk-rock influences, Wot Gorilla? played one of the most energetic sets of the day back at Havana. With complex, mathy guitar strokes and shrieking vocals overlaying heavy drums, Wot Gorilla? aren’t for everyone’s taste, but their vigour is captivating. They’re well worth watching just to see if your eyes can track the speed of the guitarist’s chord changes – it’s exhausting even just watching!

After giving up on a Slow Club set three tracks in due to poor sound quality at Warehouse 23, it was over to see Islet at the Unity Works Minor Hall. With an intriguing description in the show programme describing them as “a band without rules, where everything is possible”, they were definitely worth a look. Islet are characterised by fluidity, both in terms of swapping instruments between each other and also for not staying on stage. It’s clear that the band sees themselves not only as musicians, but as entertainers, as they’re constantly popping into the crowd, walking, hopping, running and even crawling between the audience members. Most of their tracks are discordant at first, with each member appearing to do their own thing in a disconnected, jarring way, then connecting together into a vibrant, catchy sound. Some of the tracks did miss the mark though, but the band deserves full marks for effort and showmanship and were a memorable and fitting end to the day.

So did the festival make Wakefield “Merrie” again? There was a friendly buzz around the city centre during the daytime and the overall organisation of the festival was fantastic, with the few cancellations communicated well by social media and most venues running close to time.

Unless you’ve a penchant for fast food, options for eating were limited. Sunday's fringe festival which we unfortunately were unable to attend promised craft and food stalls. It's a shame that apart from a lone baked potato van at the Orangery, there were no such stalls available on the Saturday. More options for eating near Unity Works would have been very welcome, created a central focal point for the festival and added to the atmosphere.

Amongst a backdrop of festivals which will do anything to wring extra money out of attendees, Long Division feels like it is trying to give back to the public rather than take, with the availability of free festival programmes, free badges and outrageously cheap £5 t-shirts.

Perhaps the jewel in Long Division’s crown is the accessibility of the venues. Many other festivals, whether city centre or field based, planning the logistics of your day taking into account band clashes, the walk between venues, long queues for toilets and bars can be a headache inducing. With most remote venue Players Bar, just a couple of minutes walk from main venue Unity Works planning your day just isn’t a problem with Long Division. For the indecisive, it’s even practical to see two band half-sets within a 30 minute time period.

As a whole, Long Division represents outstanding value for money and draws in some household name artists such as The Cribs, Slow Club, The Wedding Present, and Gruff Rhys. As the festival organisers point out, when the first festival took place in 2011, Unity Works, Warehouse 23 and Players Bar didn’t even exist; Wakefield is a growing city and Long Division is a growing festival – and I can’t wait to see what it has in store for us next year!