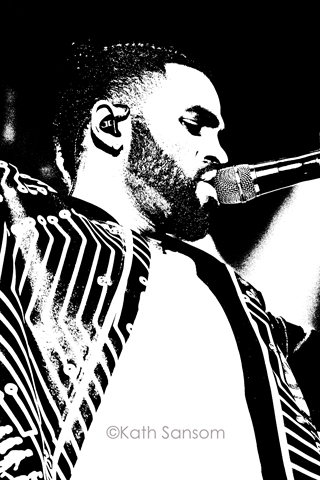 A Great British downpour lashed over festival goers as ponchos and true grit became standard for the first day of Sundown Festival.

“It's raining so hard my fingers are wrinkly,” bewailed one glitter-sodden music fan who said it looked like she had sat in the bath for an hour.

Yes. The rain was bad.

But remarkably the ground stayed mostly mud-free and the musical maelstrom kept the crowd in good spirits as three stages blasted out a mix of urban, pop and dance.

Kicking off proceedings on the main stage were Cambridge rapper Big Heath and Norfolk neo soul artist Mullally who stepped in at the last minute to replace Emmi.

Skipping on to the stage afterwards was a total style switch with trio MO who DJ Mistajam has described as the only girl group you need worry about.

They were followed by the earthy, jazz infused voice of  Espa, then Kiko Bunn, who brought a good times, deep dance reggae sunshine vibe to the day.

Next up the ever youthful Ms Dynamite, whose energy shone as strongly as when she first topped  the charts in 2003 ,with her hit single signature tune which heard the crowd sing in unison – Miss Dynamite-ee-ee!

She is a truly likable artist with a great energy and simplicity of style.

Kano showed why his fifth album Made In The Manor has become a high seller with an edgy performance that ripped up the crowd followed by the unmistakable grin and good times set of tunes from original UK rapper Dizzee Rascal.

Jess Glynne stormed the stage with a set that engrossed the sodden masses encompassing her five number one UK singles and showing why she is a rising star on the other side of the pond as well as in the UK where she is preparing for a 10 date arena tour in the Autumn.

Duo Chase and Status closed the night with a show stopper of lights and kicking drum n bass as part of their summer of festival headlining while also producing their much anticipated third album.

By Sunday ,the Norfolk Showground venue, filled with 40,000 fans, had transformed thanks to some of the last of this summer's  rays rolling through the clouds.

BB Diamond broke the musical ice on main stage with an easy set of dance tunes followed by an absolute whirlwind of energy that is Imani Williams.

This 16 year old  is going places with her passion, unmistakable voice and style.

Signed to Sigala's label it is clear to see why he has snapped her up with her timed to perfection dance moves and big voice.

Next up was rapper Yungen who is among a new wave of rap/grime acts sweeping the British music scene.

He was followed by girl trio Stooshe whose high energy was a big hit with fans.

Anne Marie brought her big vocals to the stage where she compellingly lost herself in the moment and was enthralling to watch.

DJ Sigala followed with a big impact live set embracing a Caribbean theme with a guest slot by Imani followed by Krept & Konan who powered in, packing a mighty grime punch with lyrics that screamed pure London boy genius.

A turn around style switch followed, thanks to X factor contestant Fleur East who was a massive hit with the crowd. Think Beyonce and Tina Turner, blend them up and you get some kind of idea of her style, and panache. She was a joy to photograph with a star quality performance.

Next up was Years and Years – watching singer Olly Alexander is like seeing somebody emotionally throw their entire life and a handful of glitter into every word. Riveting.

Closing the festival was American star Jason Derulo who left the crowd in no doubt about why he is such a hugely successful global act.

This man can sing, he can dance and with a big beaming smile his performance was incredible to watch – not least when he picked out a girl from the screaming crowd and brought her up to dance on stage

A great performer with slick backing dancers and musicians to boot.

Over in the red and blue tents weekend highlights were David Rodiggan, who smashes it every time he takes to the stage, Jaguar Skills and his Asian babe dancers, Dimension, Red Light,  Goldie and Wilkinson with thanks to stage hosting by Ministry of Sound, Defected In The House, UKF and the drum n bass arena.

Laurence Bagnall, one of the festival organsiers said: “This has been one of the biggest Sundowns yet.

“The weather failed to dampen the good vibes, the sun came out for some of the biggest acts and with no incidents to report the festival would like to thank everybody for their ongoing support.”