A lot of festivals try to be everything to everyone, which is no bad thing. But 2000 Trees is unashamedly about the music, new, diverse, intelligent, challenging music, which crosses genres from relaxed foot tapping Folk through to ear bleeding Hardcore. The common factor?…….These six festival organisers have put on a line up of bands that are, or will be, top of their game, even if you don&rsquo;t know it yet.

The festival site sits in idyllic surroundings in The Cotswolds, is very considerate of the green surroundings and caters for families as well as the predominately young attendees. Ample food and beer on sale, all of a quality you would expect from a West Country, Farm Heavy Shire, where the animals and burgers to be, are treated as royalty, The camping is well layed out, with views of the main stage in the thick of things or further up the site in quieter locations.

The festivals aims to have people leave with a new favourite band. This is exactly what is achieved and a whole lot more. The site consists of four stages, The Main stage, The Cave, The Leaf Lounge, The Green house, each of a different size with its own unique atmosphere.

However, some of the best moments are those unexpected and impromptu performances, be it the three giggling girls and a ukulele playing on the 2000 trees sign up the hill, or the already Legendary Frank Turner in a campsite, playing to 50 or so lucky bystanders. This was one of many appearances by Mr Turner, Playing the The Cave on Thursday night, the BBC Introducing stage and appearing ad hoc during the sets of some of his fellow artists around site. Easily earning himself the title of hardest working artist of the weekend. 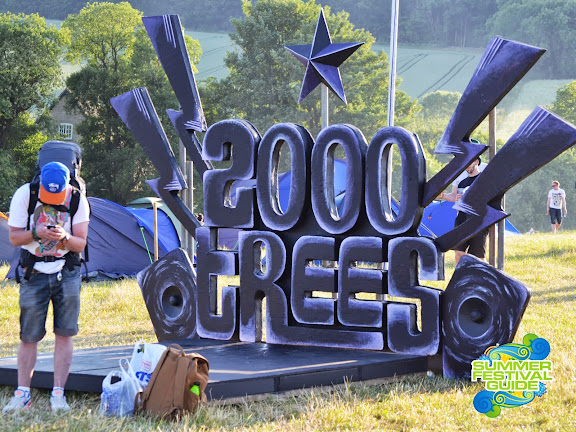 FRIDAY Was mainly spent in The Cave, rather hot and sticky due to the Festival landing on the hottest weekend of the year, much to the delight of fans who attended the Welly worthy event previously. A mid afternoon set saw Hold Your Horse is, step up,to play their Prog Rock to the assembled crowd. As they move further into the set you realise this band has depth, tempo changes, mood swings, that leave you wondering what is coming next.

Black Moth follow with a take on what has previously been considered a Midlands based Rock, An old Skool sound, but reinvented and played with an addictive youthful enthusiasm that pleases all.

INME are the pre headline, they play to a packed tent with people having to stand outside to even grab a peek. The band feel, sound and look massive, Rock with depth, changing direction, worthy of selling out the biggest of venues, but thankfully seen on a more personal set.

Adebesi Skank close day one in The Cave with a memorable performance of insanity. A manic, energetic performance, masked weirdness, a huge wall of sound, that sends fans into frenzied movement in front of the stage, mirroring that of the band.

Whilst on the main stage, Mr Frank Turner holds court, probably the most eagerly awaited performance of the weekend. The crowd are ecstatic from the opening chords of ‘Four simple words’ through some of his most popular and not so often heard body of work, ‘Plain Sailing Weather’ goes down a storm, no pun intended!  As Mr T takes to the stage for an encore of ‘Recovery’ and ‘I still believe’ every foot in the field is tapping and a crowd of voices sing a long with the man himself. It is still a sight to behold as Frank manages to get a majority of the crowd to sit down, then jump up during ‘Photosynthesis’ with the fans singing every word in delight.

Saturday. Today’s opener in The Cave is the metal might that is Grappler. A mention is worthy due to them igniting a Mosh Pit at Midday, on a summers afternoon. The intensity of the Lead singer and wild eyed front man is sure to blow the cobwebs away from the night before. At one point jumping into the crowd, kneeling, screaming to the congregation during a song most personal to himself. The next moment back on his feet and locking heads, with a fan willing to scream back his lyrics.

I have to drag myself away from The Cave and check The Main Stage, a slower pace but with an array of emerging or unspoilt talent. Local Boy Andy Oliveri opens after playing a handful of songs up at The Green House, recorded for a BBC Introducing session. Including a collaboration with Frank Turners new favourites, The Cadbury Sisters, after performing there own set the night before, a family festival indeed, amongst the artists as much!!

The Bluesy John J Presley took command later and with blues hitting a younger generation once more, there is a good chance that Mr Presley could earn his place amongst the great bluesman of the past, the stateside heavies of the 50’s or the Brum based God like Rockers of the 70’s, with his own take on the genre.

Indie heavyweights Mystery Jets close the final night. Some may consider the Indie scene a thing of the past, a floppy fringed predictable style. The Jets have other ideas though with a set of crowd favourites that excite, with a diversity of songs, a band that belie their near decade playing and thrilling audiences.

Performance of the festival for me? Math Rock Mammoths, Future of the left playing an epic set, loud, manic, intelligent, mind blowing.  ‘You need Satan more than he needs you’ being possibly the best song live I’ve had the pleasure of witnessing.

2000 Trees live up to all the promises. It was the most pleasurable of festivals, fuelled by copious amounts of caffeine, courtesy of the Coffee Crew at The Paper Cup Café. If you are a Muso, forward thinking, or just want to expose yourself to new sounds, creative genius, a new family, a fantastic festival and atmosphere, 2000 Trees 2014 awaits, will have you wishing you had more ears……