NASS Festival features the most up and coming DJs, skateboarders and Rock bands over the three day weekend at the Bath & West Showground. With Headliners of the Main Stage including Let’s Be Friends, Mistajam and Wilkinson, the crowds were indefinitely going to be filled with drug fuelled party goers who seemed to be pretty closed minded about the other stages there, for example ‘The Slammer’ which was sponsored by Kerrang!.

Upon arrival on Friday, the overall festival vibe was clear to all. Everyone just wanted to have as much fun as possible, whilst listening to a few of their favourite DJs.

With the festival still filling up at 10pm on the Friday, more chanting and Hip-Hop was filling the campsites as everyone was eager to pitch their tent so that they could start their weekend.

As you walked into the Main Stage Warehouse for Andy C, there was no questioning what the crowd would be like during the set as they welcomed Andy C on stage.  They were chanting his name religiously. The light show fuelled the energetic crowd who were ‘skanking’ vigorously to the drops in the songs. The multi-coloured lightshow fuelled the crowd as it was partially on them, which was more than the MC did as there was no crowd interaction. 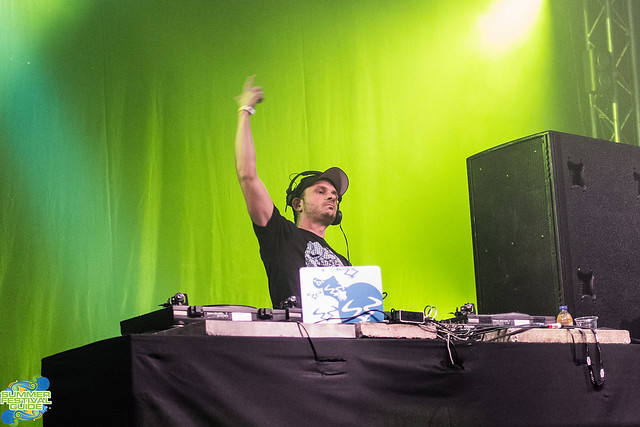 With Let’s Be Friends headlining the main stage with their remixes, it was very difficult not to sing along as they kicked off the set with a Swedish House Mafia remix, enticing the half full crowd to sing along and move closer to one another and the front of the warehouse. Shouting “Let me hear you say Hey!” to the crowd, it instantly was clear why they were headlining as the crowd’s reaction to any interaction between them and the act was phenomenal. Dizzee Rascals ‘Bonkers’ seemed to be a huge crowd pleaser as “Put your fucking hands up” was screamed through the microphone as the crowd started to jump up and down moving forward to let the ever growing crowd to join in. The crowd was incredibly dependant on the light show and the songs that were on. As if the original was popular in the charts, then the more that the crowd would enjoy it and dance along too. Thanking the crowd for being there came towards the end as “This is a raving start to the summer, and it’s all thanks to you guys” was spoken the most calmly out of the whole set to which the crowd cheered at an incredibly high level as they clearly had a lot of love and respect for the act.

Overall, the few hours that music was on during the Friday, the atmosphere was ever growing, as was the manic crowd. There was a lot to be expected of the music and sport filled Saturday…