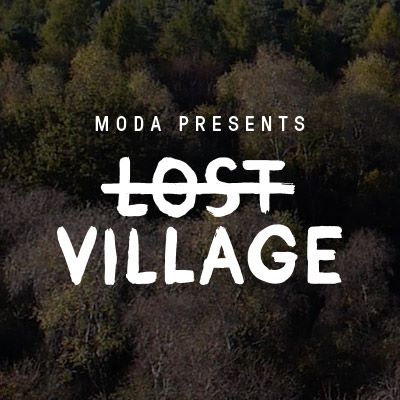 Buried in the Lincolnshire countryside, 5,000 party-goers descend upon the idyllic woodland setting of Lost Village festival. Taking place over the May bank-holiday weekend in an “ancient abandoned village”, the festival’s motto is to “join the tribe”. Set up by Moda’s Jaymo & Andy George – who later play a sparkling set on Saturday afternoon – the location is perfect for the acts performing; eclectic electronica from Die Vogel and Four Tet, crowd-pleasing sets from Ben Pearce and Annie Mac, and heavier techno-based sounds from Tale of Us, Jasper James and Gardens of God.

Aside from one shower, the usually temperamental English weather holds up, offering sun throughout the whole weekend – Summer Festival Guide even returns home with a tan! Transport-wise, there is a free shuttle bus; impressive for a first-time festival. SFG meets people who have travelled up from the Midlands, London, and one electronic music lover who has travelled four hours from Brighton.

Set behind a lakeside family campsite, it’s like a whole other realm. Attracting a multitude of types of people; when setting up camp, one middle-aged man sporting a Blasé Boys Club t-shirt is drinking with those who could be his children. Everyone who SFG meets is friendly and really here for the music.

Reasonably priced Vodka and cokes begin to flow throughout Grandmaster Flash’s charismatic old-school set, declaring the festival open on Friday evening at Basecamp. Though licensing requires music to finish at midnight each night, back in camp there’s no sign of sleeping until the early hours.

[Special mention to Diamond Dogs, who provided the best post-drinking cure with their Chilli Cheese Dogs and Tater Tots]

It’s Saturday morning, the sun is shining through the campsite and anticipation is high to see Lost Village’s main stages; the Abandoned Chapel, Forgotten Cabin and The Ruins, each with impeccable sound-systems and impressive set-design. At midday, Citizenn opens the Cabin with a groove-laden house set before Jackmaster’s housemate Jasper James – a personal highlight – delivers hard-hitting tech-house, and as one Villager suggests, “its 3 in the morning vibes at 1 in the afternoon”, another gushing, “I feel like I’m in Berghain!”

Later, Erol Alkan delivers an acidic electro set like a true professional, looking suave in a leather jacket, before Denmark’s Kolsch plays what everyone wants to hear; Huxley’s ‘I Want You’ and Adesse Versions’ ‘Pride’ make much-appreciated appearances as well as his own euphoric piano-led ‘Cassiopeia’. Over at The Ruins, Lost Village’s mud-filled main stage, Dusky’s ‘Yoohoo’ is blasting through the industrial-sized speakers to the packed crowd as one partyer holds up an LED lit ‘TUNE’ sign. Back at the Cabin, Four Tet closes the first night in magical, enchanted fashion; his Martyn-collaboration ‘Glassbeadgames’ becoming a highlight as the vibrant strobes light up the darkness.

Come Sunday morning, Ejeca’s defying the traditional day of rest, delivering tech-house at the Abandoned Chapel, as one guy dressed like Fryar Tuck with a massive tribal stick urges the crowd on. Theo Kottis, Moda Black’s newest signing, continues on a similar vibe at the Cabin as glittered faces – old and young – tribal hennas and selfie sticks are visible at every turn, watching the darkly uplifting set; Guy Gerber’s remix of Art Department’s ‘Catch You By Surprise’ really goes off.

Tourist attracts a massive crowd to the ruins, performing with synth pads and keyboards; Pretend, Trust In You and I Can’t Keep Up translate effortlessly in Lost Village’s mud-covered main stage The Ruins.  With a massive ‘U’ behind him, the co-writer to Sam Smith’s ‘Stay With Me’ introduces Anywhere, a new track from his debut album, appropriately titled ‘U’.

“How great is this festival?” asks William Phillips aka Tourist. It’s a statement which becomes heavily echoed over the course of the first ever Lost Village. Considering this is its debut year, Lost Village has the potential to rival the likes of Secret Garden Party in the not so distant future.

Later, after stumbling across a fake marriage – Lost Village has a plethora of spooky actors waiting at every turn – Tale Of Us deliver an intense techno set as the Forgotten Cabin’s strobes light up one of the weekend’s biggest audiences.

Jackmaster, sporting a ‘We Love Detroit’ t-shirt, follows, playing a typically eclectic set of house, techno and everything in between. Meanwhile, Totally Enormous Extinct Dinosaurs aka Orlando Higginbottom seems on a completely different trip in The Ruins; dropping drum & bass and jungle tracks, it’s a refreshing break from the weekend’s house/techno sound, before Annie Mac closes out the first ever Lost Village with on-point house tracks.

Over the course of the weekend, SFG have brushed shoulders – and taken selfies with – Annie Mac, Richy Ahmed and Tourist. It’s not often that such big names are within arms length walking through the woodland setting.

Post-festival, Lost Village’s founders Jaymo & Andy George have commented: “We never in our wildest dreams expected it to go this well! The crowd were 10/10, every stage was constantly busy, all the artists who played have said amazingly positive things and all those little elements we planned came together just how we hoped. The feedback we’ve been getting since has been unreal… we can’t wait to start planning the next one now.”

The theme for Gottwood Festival 2013 has been chosen – and it’s ‘The Wild Things’. There have been some changes at Gottwood Festival this year, but one of the most exciting announcements is that there will be two open-air stages running until 4am – in a similar fashion to the first ever Gottwood. The Boxford Caravan, as well as a new woodland stage will run until the twilight hours, with surround sound four-point Funktion One systems helping to bring the noise! Dancing in the trees all night long is back!

Gottwood strives to help and provide a promotional platform for artists. This year look out for The Bestiary building bringing larger-than-life interactive animal installations made from salvaged wood; Mr Kobo returns to paint a modern-day mural. Venture out to see the oversized live oil painting and graffiti from the uber-talented and Gottwood Caravan creator Technicolour Moon, as well as interactive tree painting, which is set to be an amazing sight to see.