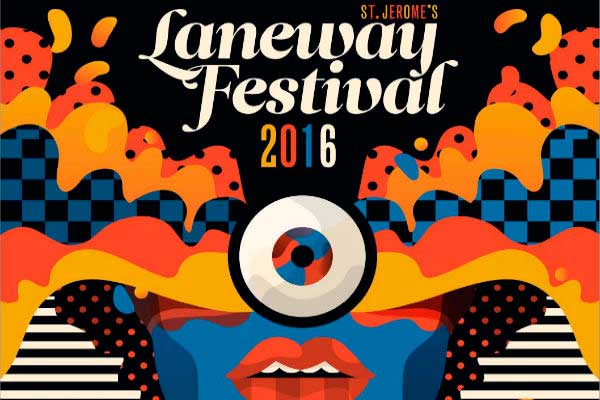 As I strolled through the entrance of St Jerome’s Laneway festival in Sydney, I was instantly impressed. Set in Sydney’s college of the arts in Rozelle, the venue was a devastatingly beautiful and unique choice, and certainly different to any music festival venue I’d set foot in before.

It was mid-afternoon, and as we twirled past hordes of impressively fashionable groups of girls (and guys too actually) and aging sandstone buildings, we soon managed to squeeze our way towards the front of the Park Stage to catch our first set of the day; Australian duo Big Scary. I hadn’t heard of the pair before but I soon became drawn in by their chilled out tunes, swaying in time slowly with the masses under the scorching hot summer sun, taking a particular liking to the smooth and slow ‘Thinking about you’ and ‘Twin rivers’.

Next we moved towards the Future Classic Stage to catch talented multi-instrumentalist Japanese Wallpaper, whose name I was very much fond of. Once again, I was captivated. Paired with stunning vocals from singer-songwriter Airling, his enchanting melody ‘Forces’ rippled through the crowd, sounding ever-more delightful teamed with the crowd’s enthusiastic singing.

Soon it was back to the Park stage for something slightly more upbeat in the form of Australian hip-hop duo Hermitude, and upbeat is certainly what we got. The crowds had stretched pretty far back, so perched slightly on a hill we were soon jumping around messily, drenched in sweat, to the likes of the extremely catchy ‘Speak of the devil’ and ‘Searchlight’. Lots of fun was had indeed.

With a two hour gap until Scottish electronic band Chvrches (who I’d been most eager to see) were taking to the Garden stage, we took the opportunity to feed and water ourselves with burgers and plenty of cider. Yum. And with 20 minutes left before the big entrance, somehow we luckily managed to cram our way to the front.

The lovely Lauren Mayberry, Chvrches lead vocalist, soon bounded onto the stage, instantly enthralling the bounds of fans with ‘Never ending circle’, the first track on their latest album, proving to be a fantastic introduction. Mixed in with some witty banter from Lauren, the trio set the stage alight playing tunes from both their albums, Every Open Eye and The Bones of What You Believe. This included the likes of some older picks such as ‘Gun’, ‘We Sink’ and my personal favourite, ‘Recover’, along with fresher stuff such as ‘Leave a trace’ and ‘Clearest blue’. They concluded with a bouncy track everyone would recognise; hit single ‘The Mother We Share’. I was impressed!

With limited time, we snuck off to the Mistletone Stage to catch the end of dream-pop duo Beach House’s set. We were soon spellbound by their mystical-sounding hit ‘Myth’ as their set came to a close. Well, one song was better than nothing, and it was definitely a good ‘un!

It was completely dark by the time we head off to catch our last set of the day, Scottish electronic music producer Hudson Mohawke, back at the Future Classic Stage. By the time we’d arrived, there were tons of groups sitting cross-legged on the ground, most completely drunk from their day out at the festival. Yet soon we were up on our feet again, treated to what was perhaps the most energetic set of the night. As the crowds bopped frantically to the beat along to the likes of hit ‘Chimes’, with the elevated highs and dramatic drops, I couldn’t help but lose myself in the music. It was the perfect way to end a fantastically unique festival.