“Make sure you pack your sun cream…it’s going to be a scorcher next weekend!”

These words did not end up ringing wholly true. In fact, this was one of the wettest, muddiest festivals I have ever experienced…and I've been to at least 20. If you are going to have your festival in the Lake District, who knows what weather you are going to get, but this was a Northern festival, with proper double-hard Northern people who were ready for anything. 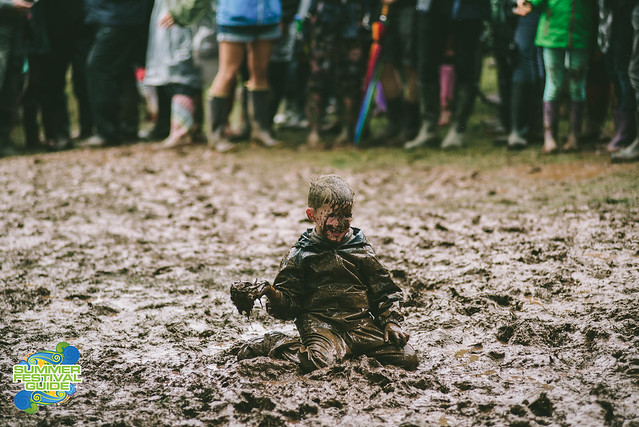 We arrived early on Thursday, this being the first year to allow entry the day before the main festival.
After finally getting up our beast of a tent, we caught the first half of Craig Charles’
thumping set in the Glow tent, before some Yorkshire Ska in Chai Wallah, courtesy of The Talks.

Friday started out in the real ale tent, and not even for beer (this time!), but instead to avoid the first
heavy downpour of the weekend. Samba bands were a feature across the site, and kept everyone
entertained until the stages started. By the early afternoon the rain had stopped, giving way to sack
races and plenty of activities to keep families busy in the Ladybird Kids area. Teenagers got their dancing shoes dirty early on at the Jägermeister stage and in the House Party tent. The first big crowd
of the day was for The Dub Pistols, a band who just seem to be made for festivals, getting everyone
stomping those wet weather blues away.

There was disappointment for some as the next act Ella Eyre was unable to attend due to illness, but fear not…The Sunshine Underground served up an extremely last minute indie dance set that kept everyone happy while they refuelled in anticipation of De La Soul…

Unfortunately, owing to an accident on the M6, their set was cut short, but the enthusiasm they provided more than made up for it.
“Me, myself and I” put lots of smiles on faces. With as many years of experience as they have they worked the crowd as you would expect.

Just enough time to grab some food. There was plenty on offer, ranging from exotic burgers
(Llama; wild boar and wagyu beef) to delicious momos from the Tibetan Kitchen (my photographer is now completely hooked on these badboys).

Suede headlined Friday night and began with a quiet opener “The Next life” from their first album.
They had won the crowd over by the third song “Trash”, followed by “Animal Nitrate” giving
everyone a chance to sing, and Brett Anderson to strut his stuff like the mid 90’s were here again.
Mid set we were given a new song “Tightrope” which the crowd were not really sure about, and
their set finished with “Beautiful Ones”.They closed the main stage with an encore of
“She’s in Fashion”, and a wonderful rendition of “Stay Together”. 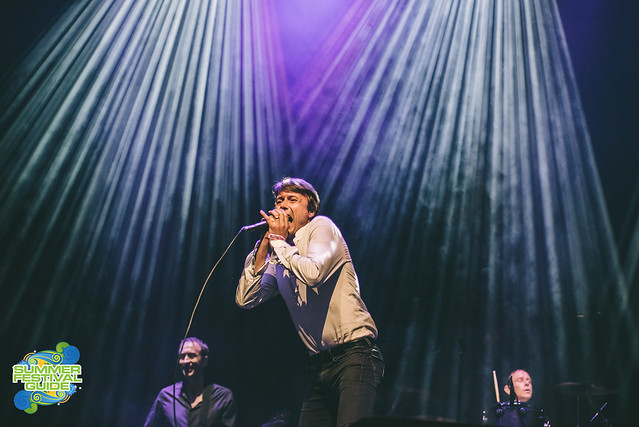 After hours there was plenty to do with particular highlights being the Britpop set in the Tim Peaks Diner and the jazzy breaks of Mr Scruff.

As morning broke on Saturday, the site was turning to a liquid red thanks to the Cumbrian mud and morning rain. That didn’t stop large numbers of aliens, and sci-fi characters emerging from their tents to lighten up the gloom. The Glow Tent hosted a mass moonwalk to the song “Billie Jean”, as hundreds of MJ’s strutted their stuff.

Mid-afternoon, as the sun peeked out, Newton Faulkner played to a background of bubbles drifting across the field, “Teardrop”, and Justin Timberlake’s “Like I love you baby” bringing the crowds in. Athlete continued the summer vibe, and the sunglasses were out by the time Razorlight took to the stage. Sporting a lovely beard (trust me, I know about beards!) Johnny Borrell and the boys played a high energy, hit filled set.

Then, it was ALL about Madchester, with bucket hats and Lennon glasses being the necessary uniform. The Happy Mondays began with Bez informing us of his political intentions, which is either genius, or the most bonkers thing you’ve ever heard. The majority of this crowd would definitely vote for him. Shaun planned to keep it a PG performance, and entertained the crowd by never being quite sure which songs were coming next. Rowetta looked fantastic in her cowboy hat and tassels, and people were literally climbing the trees to get a good view. The sound was great and the whole arena was rocking to party classics from “Loose Fit”, to “24 Hour Party People”. 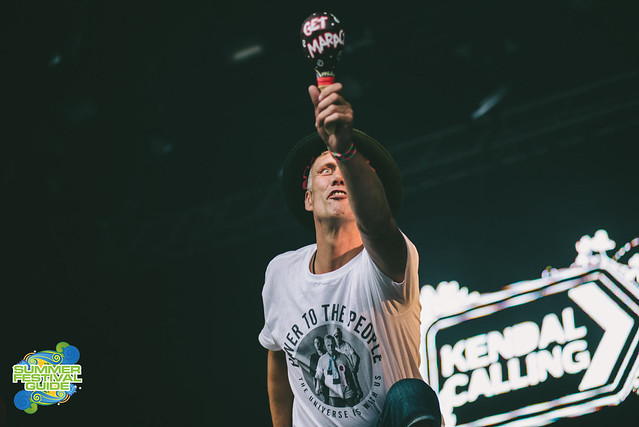 Frank Turner started his set with a smaller crowd, hampered by the rain, but that crowd grew and got to enjoy a very special headline slot. This being his third time at the festival, he’s
definitely earned his Kendal stripes, and when he announced how honoured he was to play, you really knew he meant it. His band, The Sleeping Souls, threw themselves around the stage and really stepped up the volume, with stomping tunes like “Photosynthesis” getting the crowd all clapping and singing along. He dedicated his new song “Angel Islington” to all the Northerners. Despite a re-tune mid song and a broken string, nothing could faze Frank tonight! 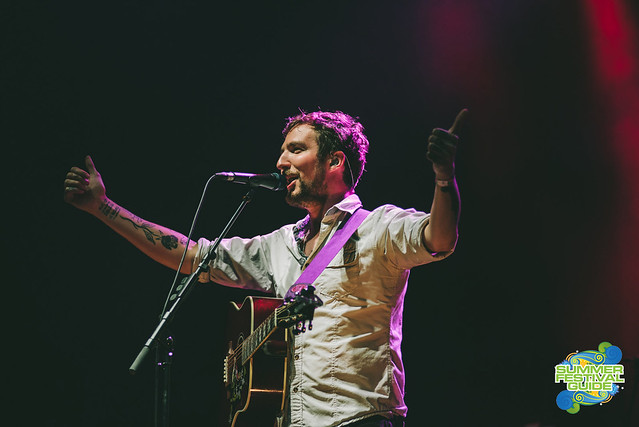 Sunday, originally predicted to be the best day for weather, was the worst, with frequent showers turning the main arena into a mud bath. Children and adults kept their spirits up by sliding down the hillside, and one of the great moments of the weekend was the chap in neon and a flat cap, cruising round a pool of mud in his electric wheelchair, chasing people. The Lancashire Hotpots played at lunchtime and won the award for most costume changes, and as they said, it was like a Lady Gaga gig! Conga lines, beach balls and songs including “We Love the North”, and “Chippy tea”, were just what was needed to keep everyone from flagging.

Reel Big Fish were the afternoon high point, Masters of styles they gave us the Ska Punk we all expected, but also a touch of Disco, and even a bit of Square-dancing. With choreographed kicks they finished with “Take on Me”, and as the dancing increased, the mud was flying. Tom Odell didn’t go in for quite the same level of onstage action, but instead let his music do the talking. It only took him to point to the girls at the front to get them all screaming, as he hammered away at the piano. A new song “Jealousy” from his upcoming album was particularly well received.

Miles Kane was taking no prisoners with a straight up rock and roll show. Dressed in a psychedelic shirt, his strutted around owing the stage, scissor kicking as he went. By the time he played “Don’t Forget Who You Are”, he had the audience joining in from the front to all the way up the hill. 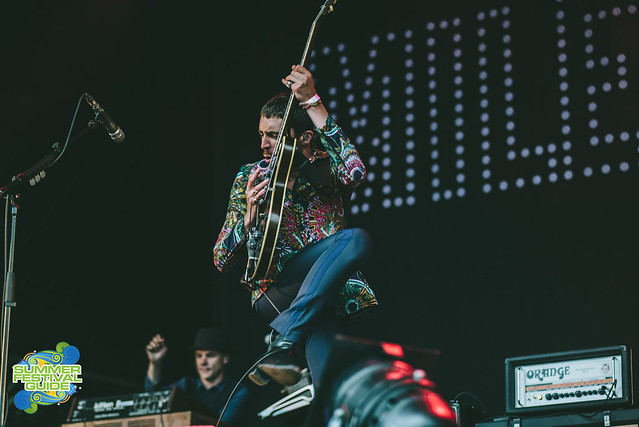 The final act on the main stage was Example, the biggest crowd of the weekend, and everyone wanted to be at the front. The sound from the stage was massive, with filthy bass lines shaking the sodden ground. Dressed in black he electrified the entire field, with lasers and a completely awesome neon drum kit. “One more day (Stay with me)” “Changed the way you kiss me” and “Kickstarts” were by far the biggest sing-a-longs of the weekend. As the set finished with air cannons
and ticker tape, the epic firework display was a worthy end to a sometimes challenging but ultimately celebratory weekend. 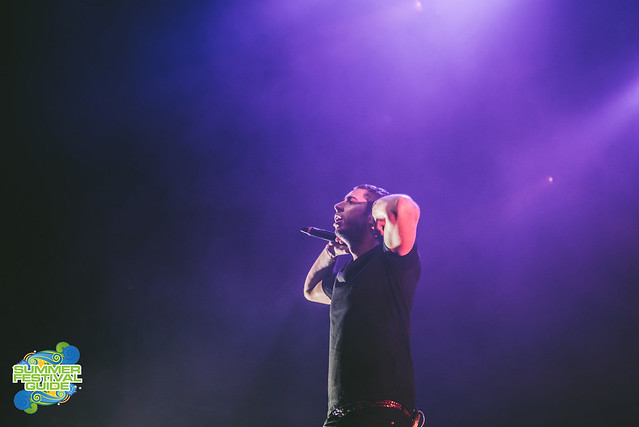 After the main events, we headed back to Tim Peaks Diner for some energetic table dancing and a storming funk and soul set from Tim Burgess.
Just time to pop back to the real ale tent, this time for a well-deserved pint, we’d all survived!