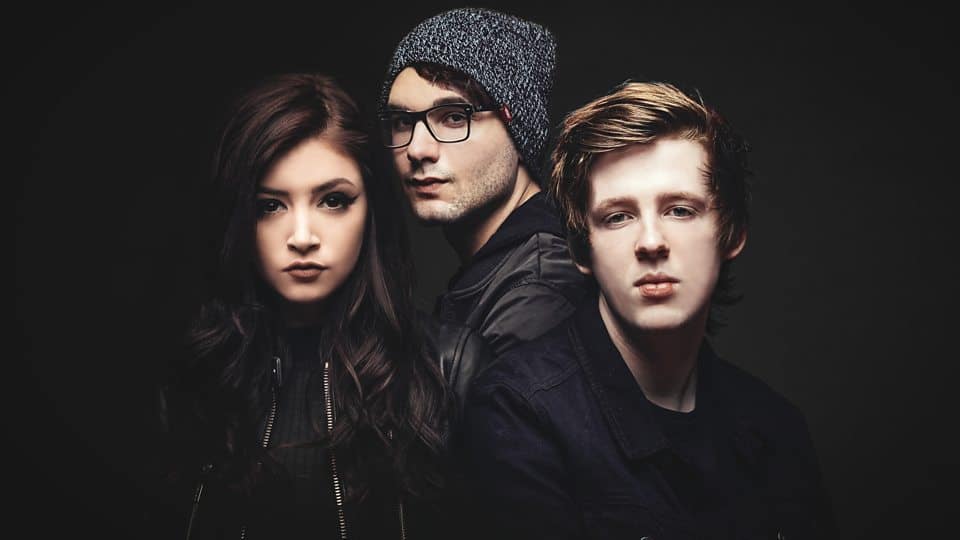 The O2 Forum in Kentish Town, London has played host to many amazing artists over the years.  Just some worth a mention are: Ellie Goulding, Kasabian, Ed Sheeran and Bastille.

On Saturday 29th September 2018, The Forum welcomed two more great live acts – Against The Current and special guests The FAIM.

Upon arriving at the venue, there were queues of excited fans that trailed right around towards the back of the building.  When entering the lobby, our photographer, myself and all other attendees were scanned and had bags searched by the security teams on site.  The guidelines regarding security needed to be strict for such an event. So much so that even sweets and packets of gum were confiscated.  For those of you that may not know of The o2 Forum, here is a brief description of the venue.   The building is separated into two tiers, the floor for standing ticket holders and the upstairs balcony for a seated ticket area.  At the back of the room was a merchandise stand for both acts of the night and a bar running down the length of the room on the left hand side. 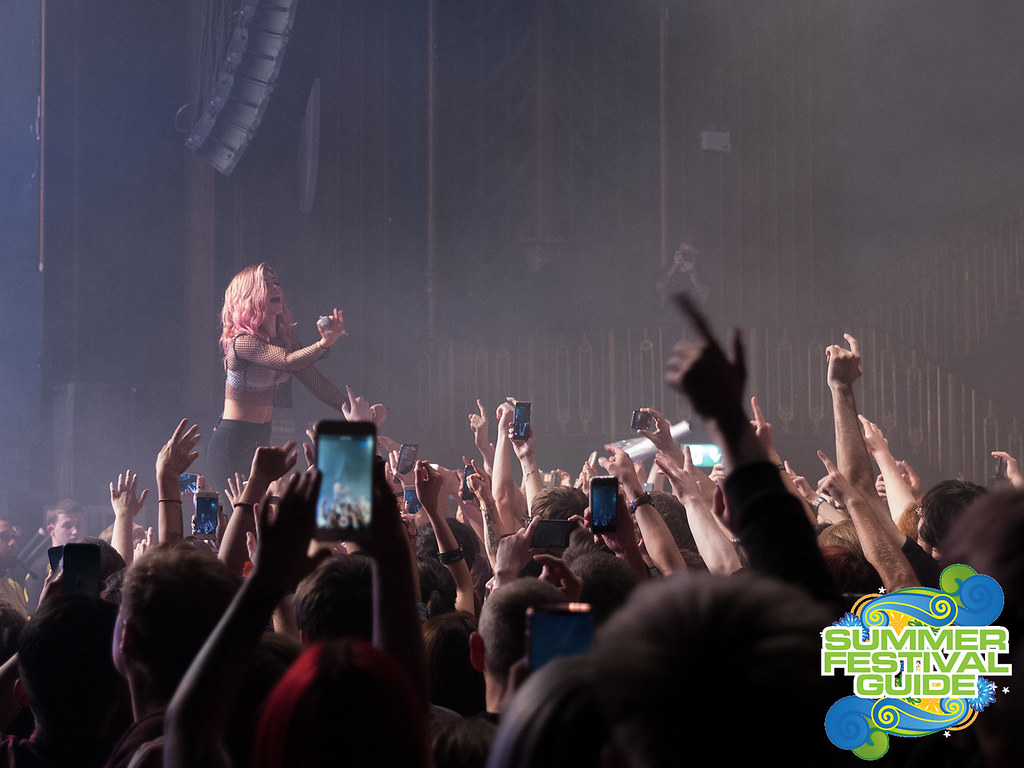 Both Against The Current and The Faim have recently been extremely busy performing live at many locations around the world.

Against The Current are an American pop-rock band from Poughkeepsie, New York.  They originally formed back in 2011 and have grown exponentially popular with fans since their music videos on their YouTube channel became a viral sensation.

Current band members Chrissy Constanza (vocals), guitarist Dan Gow and drummer Will Ferri have all become household names around the world following the success of their early EPs and their debut album “In Our Bones”.  The trio have just celebrated the release of their second album “Past Lives”, which was released on 28th September 2018 – just one day before this live show at The Forum.  Vocalist Chrissy confirmed this by stating on stage “this is our first live show since the release of our second album!”

Playing live at The Forum this past weekend was just one short stop on the band’s busy world tour schedule.

Let’s not forget that the tickets were advertised as Against The Current and Special Guests.  Those special guests were the lovable lads that make up The Faim.

The Australian based band ( formerly known as Small Town Heroes) have seen soaring success under their new name.  Their debut single ‘Saints of the Sinners’ was co-written by the brilliant Pete Wentz of American rock band Fall Out Boy – giving the song a very edgy vibe.  The band have been rocking their way through a very busy 2018! I personally love these guys and have seen them perform live three times.  I have also been fortunate enough to meet them a couple of times too.  Honestly, they are some of the nicest people I’ve ever met.  They always have time for their fans and show the highest appreciation for their ongoing support both in person and on social media.

Around 8.15pm, the lighting around the stage dimmed, leaving just a little blue light on show.  Before we knew it, there were some beats coming from the drum kit as we were given a small introductory solo from the band’s drummer Sean Tighe.  As the beats continued in a looping rhythm, each band member came out on stage one by one and picked up their instruments before the final entrance came from the band’s lead vocalist Josh Raven as he ran onto the stage being greeted by a huge roar of excited screams.  One of which came from myself.  The Faim jumped straight into performing their first song of the night ‘My Heart Needs To Breathe’.

Soon after we got to see them perform singles ‘Midland Line’ and ‘When It Comes’. The latter was great to see as I’ve been to a few of their shows before and hadn’t seen this performed live. 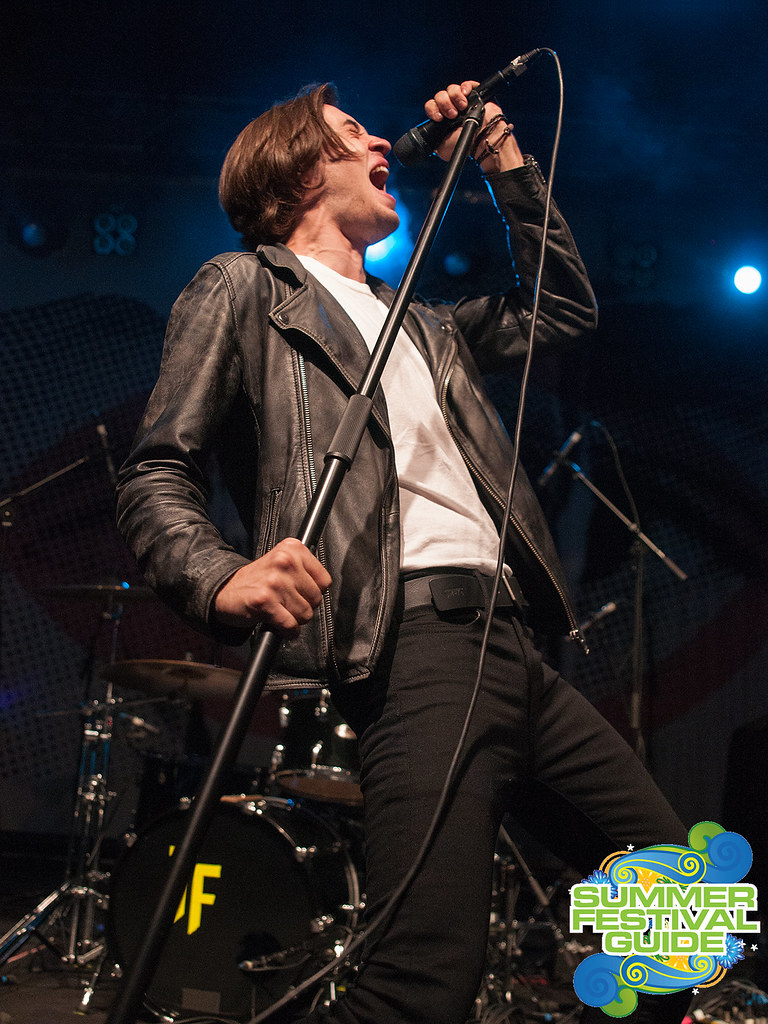 Roughly half way through their performance, the lights dimmed once more and the high energy had eased.  Lead singer Josh introduced a song of theirs with a heartwarming message for everyone there that night.  He had said that at some point in our lives we have all been through times or periods where we have had to face situations and “negative vibes” so the song he was introducing was about learning to face our fears and deal with them to move on.  The song he was referring to was ‘Make Believe’.  It is a song that contains very relatable lyrics for so many people.  So this is one that always seems to resonate well with fans at their live shows.

Of course, the band had picked up the pace again to continue to perform.  There was so much energy both on and off of the stage.  I say off of the stage as during ‘Saints Of The Sinners’ the band’s front man came down to perform in the crowd.

The Faim even personalised one of their songs for the venue’s location.  As they played their latest release, ‘A Million Stars’, the lyrics were altered.  There is a line in the song which is as follows: “Last I heard, she was spotted in Portland, Been two years, haven’t seen her again”.  “Portland” was changed to “London” which worked really well and was a nice little tribute to all of us there.

They ended their set with the song that is also the title of their current EP, ‘Summer Is A Curse’. 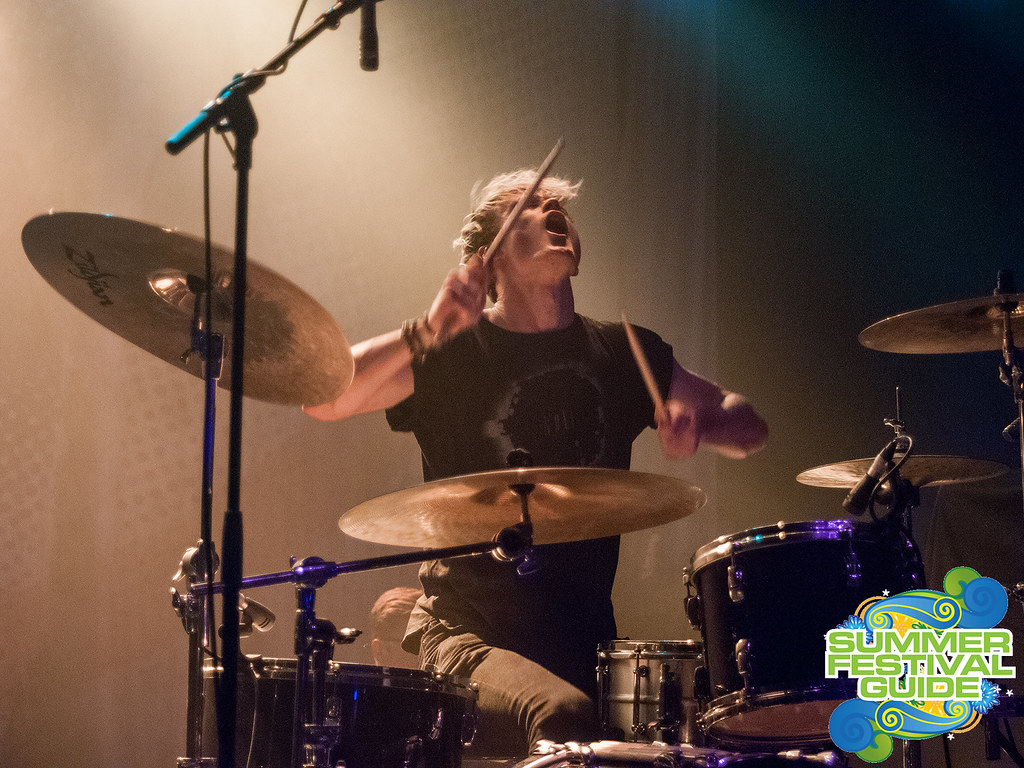 One last thing to add about The Faim‘s live show in Kentish Town. The award for most amusing moment goes to the band’s bassist and keyboard player Stephen Beerkens who picked up his keyboard, whizzed around and rocked out on it hard like a guitar. It certainly made me chuckle.

After the show, both Josh and Stephen were situated at the back of the room by their merch stand to greet their fans, pose for photos and sign autographs.  I also managed to speak to Stephen to ask about what’s next for The Faim.  He said that they have had a very busy 2018, but they’ve all had the best time! They will continue to tour with Against The Current on their European tour and will also be heading to America to write and record new material. Exciting stuff!

After a short interval, a buzzing atmosphere filled the room as the night’s main act were about to take centre stage.

Will Ferri (Drummer) and Dan Gow (Guitarist) from the band were first to make an entrance, quickly followed by vocalist Chrissy Constanza. As she walked out, she was greeted by huge screams from her fans. There was one particular fan standing quite close to me in the crowd, he was appearing to be having the best night of his life as he sang along, swayed and danced.  This man even approached me to say “Chrissy has the appearance and the voice of an angel”.  The petite, but energetic vocalist was often seen performing whilst standing on a platform at the front of the stage as she showcased the band’s songs. 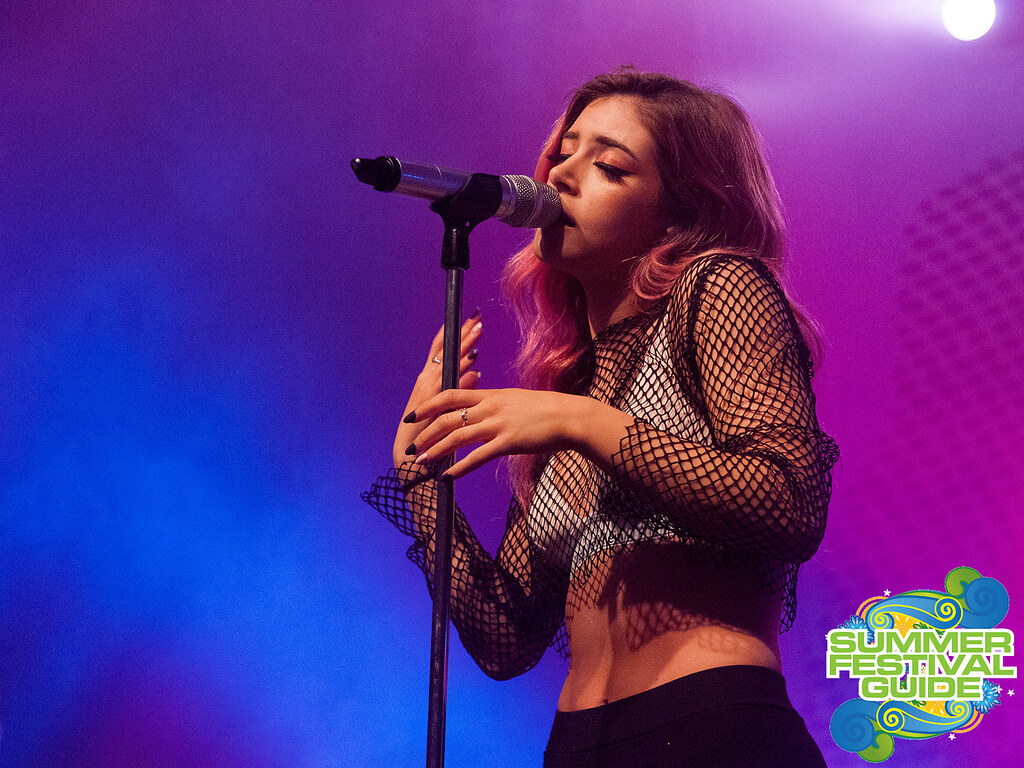 Against The Current opened their London show with their single ‘Strangers Again’. The song proved extremely popular with the audience as vocals from the band could barely be heard over the vocals coming from the audience as they sang along. This was also the case as they performed well known hit ‘Gravity’ where Chrissy also made a request to everyone in the room saying “If you have a light on your phone, lets light those flashlights up!”.  The room was quickly filled with hundreds of bright white twinkling lights as they swayed in the air.

As the act wowed us with performances of older songs, putting on quite the visual display under pink and blue lighting, they continued to knock it out of the park as they gave us a taste of some material from their new album.  One of the new singles played from this new album, was the band’s latest release, ‘Voices’.  This track, along with ‘Almost Forgot’ gives their latest material less of an edgy, but more of a pop sound.  I quite like that Against The Current is a band who can easily showcase such a wide range of musical styles.

The trio also appear to have a really great connection with their fans. Early into their show, Constanza noticed a fan in the crowd waving a piece of artwork, and asked the fan if she could take it from them. It wasn’t long before she was off the stage and down into the crowd to collect the picture from her fan.

As expected by the enthusiastic fans, it was clear that they weren’t ready to go home as the act ‘finished’ their set with ‘Demons’.  I’m actually quite surprised that The Forum still has a roof on its building, as all that could be heard was loud chanting demanding more. 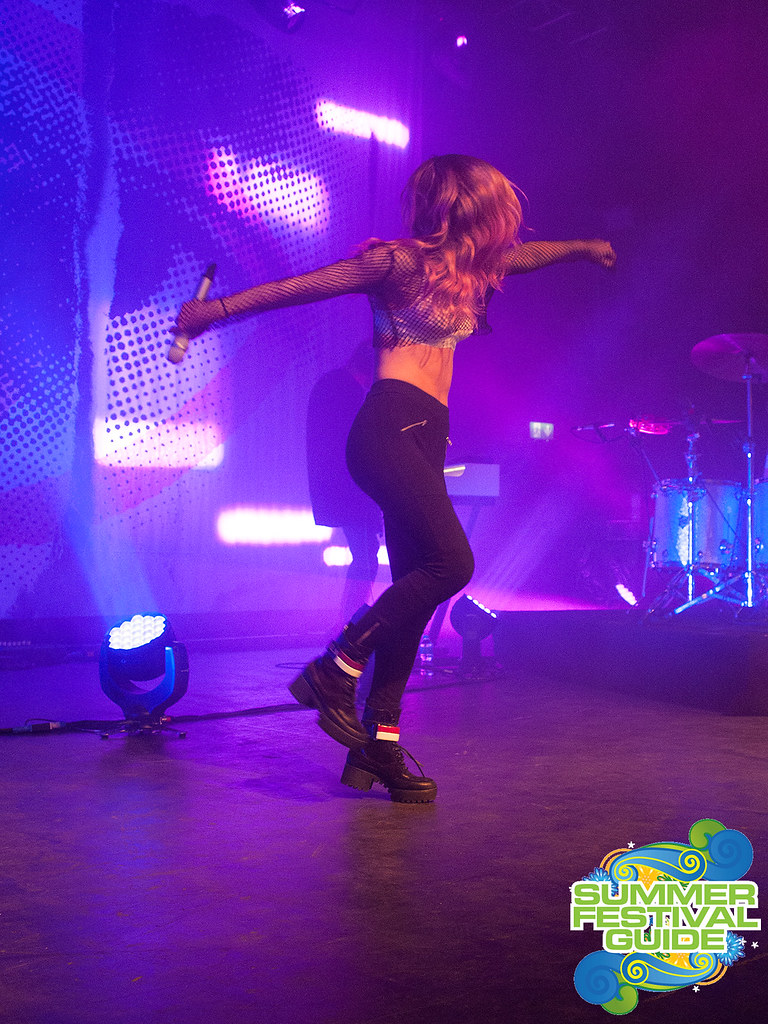 Members of Against The Current did indeed return to give their fans more for an encore that included the acoustic song ‘In Our Bones’ before then closing with ‘Wasteland’ and a blast from confetti canons from either side of the stage.

Against The Current and The Faim gave us a night to remember, leaving us with fond memories and looking forward to future material and shows.

Both artists are continuing their current UK/European tour.  Against The Current’s 2nd studio album ‘Past Lives’ and The Faim‘s current EP ‘Summer Is A Curse’ are available to purchase and download now!  If you love your pop/rock music then go and get them now! I can guarantee you won’t be disappointed.