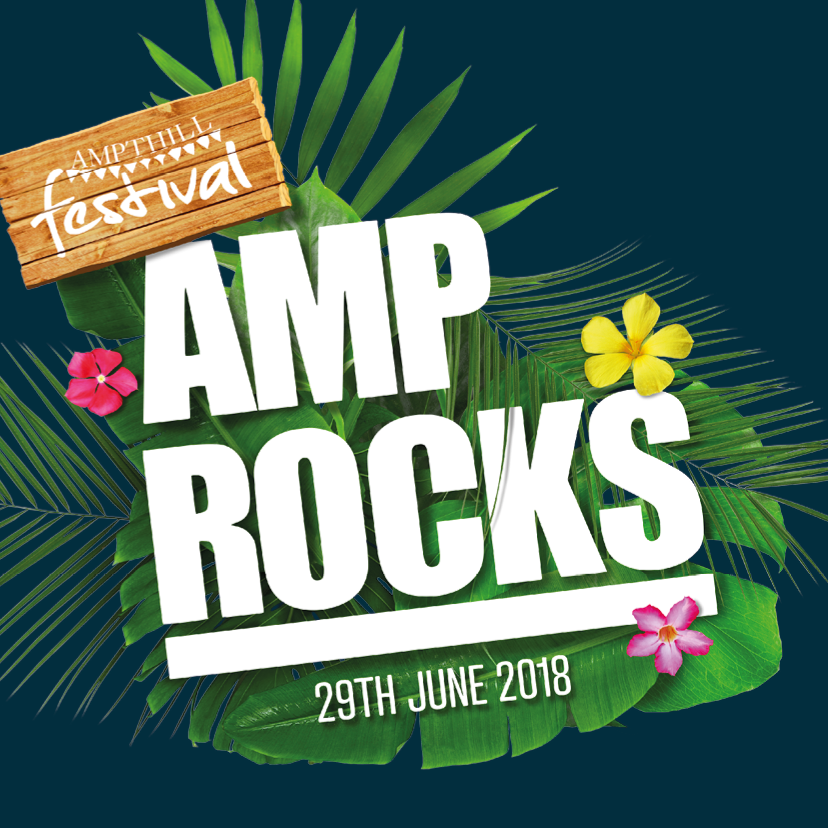 This weekend saw the return of Amp Rocks! The live music concert is part of the annual three day event, Ampthill Festival.  Amp Rocks is known for taking ticket holders back in time to hear music that we may not have heard for decades.  This year was no different.  The organisers of the festival also have a tradition of supporting local music by inviting the latest local Battle Of The Bands winners to perform on stage to open the weekend event. The band that kicked off the event this year was The Kazoos. The battle of the bands winner took over the stage by performing covers of hits including Florence and The Machine's "Kiss With A Fist" and the hugely popular "Valerie" – made famous by the unforgettable, late Amy Winehouse. 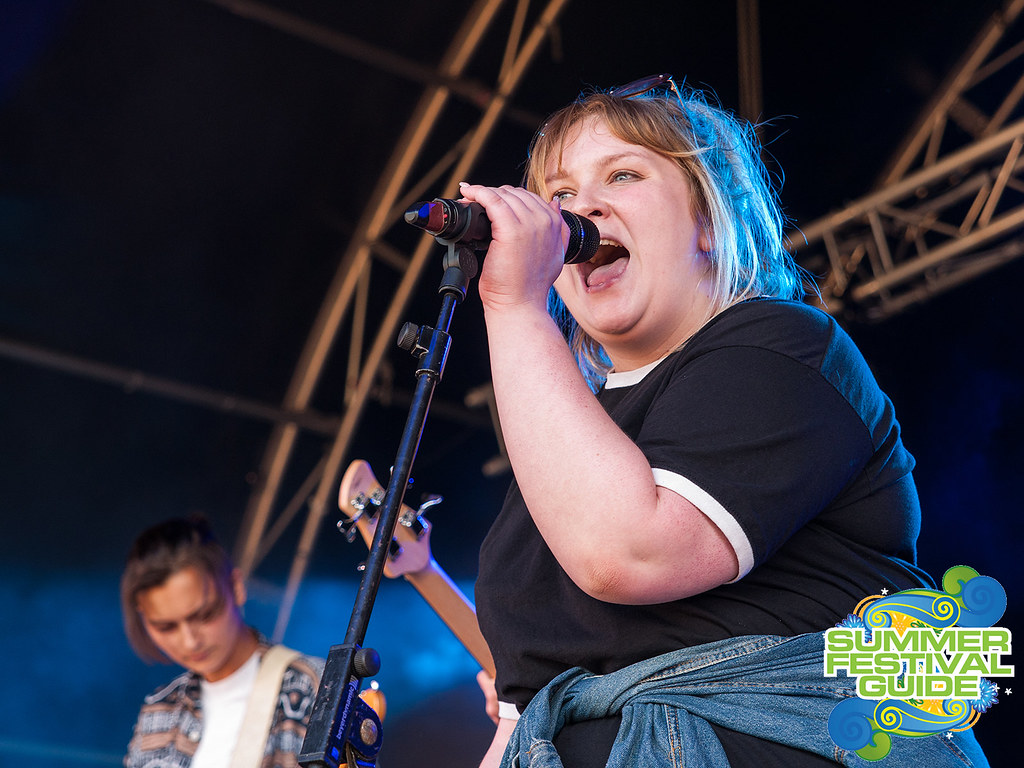 After the performance from the local group there was a short interval, this gave me some time to take a wonder around the site.Just as the previous year had seen, there was plenty of facilities on the grounds. An abundance of port-a-loos, two bars and a lot of food vendors.  When in the food court area, I could see burgers, fries, hot dogs, an ice-cream van, a sweet stall and stone baked pizzas.  Although the range was good, I do have two little niggles regarding the food court.  Firstly, which actually surprised me, there did not appear to be any vegan food options other than perhaps a portion of chips, which cost £5. One food vendor even decided to charge another £1.50 on top of that if you wanted sauce on those chips/fries so if you were in the mood for cheesy chips it would have cost you £6.50. Although, I have since been informed by one of the organisers of the event that there were indeed some vegan food options, including tacos . This may have just been something that may not have been advertised as loudly as it was expected to have been.  Regarding food prices, I understand that the food vendors need to cover the cost of being at the event and they also need to make a profit, also food at events such as this one tend to be on the expensive side, but the prices these vendors were charging were verging on extortion. In this present time, Veganism is taking over the world. More and more people are choosing to live a vegan lifestyle, particularly when it comes to their diet.  So having no vegan food options was quite unusual to see at a festival scene nowadays.  The other problem that I had with the food court was where it was situated.  Last year, food vendors were set up just behind the main stage. On level ground.  This year, the carts, vans and stalls were set up at the top of a steep grassy hill with no ease of access for people who are less able.  This meant that it was quite unlikely for someone who may be wheelchair bound to be able to buy food on site.  There also appeared to be a lot of people wondering round the grounds on crutches, I saw one person on crutches struggling to climb up that hill. 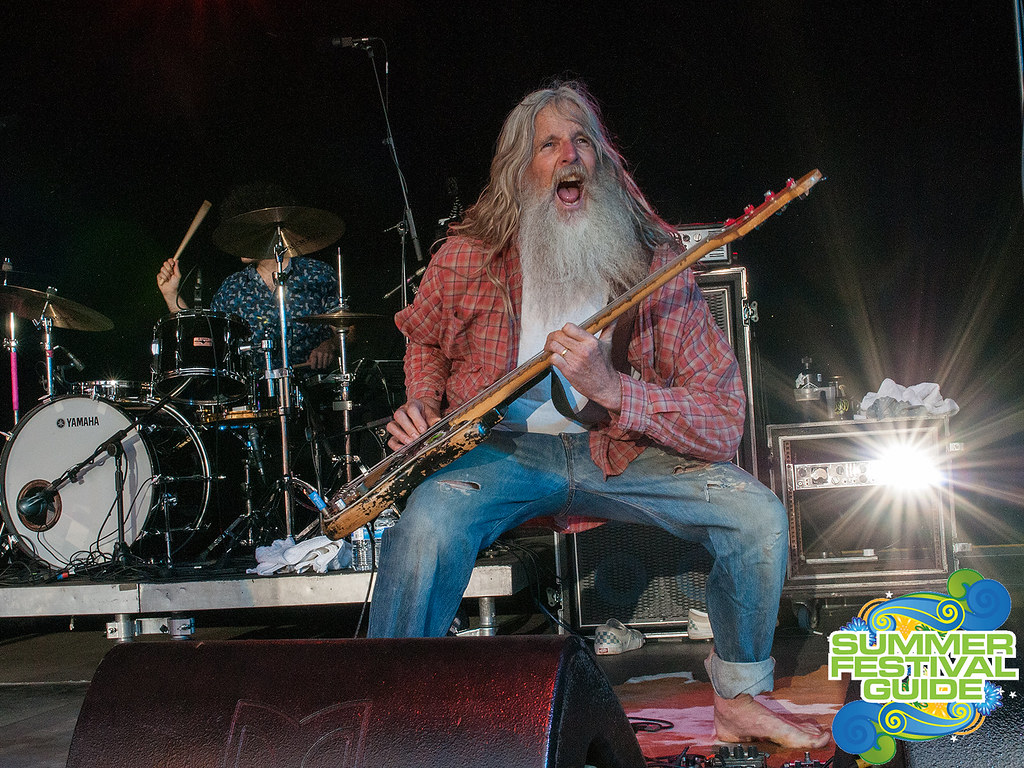 The intervals between acts were fairly short, so for the rest of the evening, I was stationed right in front of the stage to make sure I had a great view of the artists.  By this point the arena was becoming a little densely populated as more attendees filled the stage area to see the next act perform. That of course was British indie rockers, Reef.  The band are well known for their hit "Place Your Hands" and were a big deal in the 90s music scene. They have also previously played gigs at the almighty Glastonbury and Reading Festivals.  Reef are back and are currently on tour to promote their fifth studio album, titled "Revelation" which was released back in May this year.  The band were known to be rather energetic on stage in their classic years and nothing is any different now. They still have plenty of energy and charisma while performing live. Front man Gary Stringer, along with his fellow band members performed classic Reef singles including "Consideration", well known anthem "Place Your Hands" and a little preview of their new music from their current album including the titular song "Revelation" and new single "My Sweet Love". 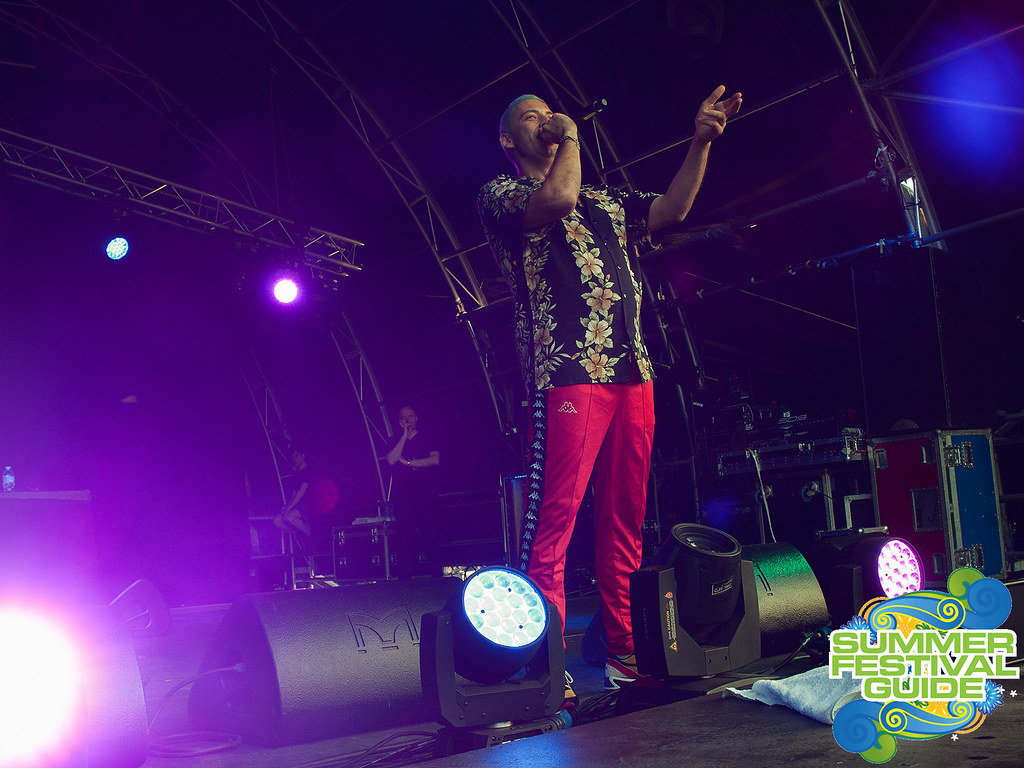 For me and I'm sure many other people that attended Amp Rocks on Friday evening, the night's next act was by far the biggest set of the entire gig.  That set was brought to us by Example & DJ Wire. The London rapper and DJ pair have played for audiences all over the world and wowed them all! They have previously played at the infamous Glastonbury Festival with singles including "Changed The Way You Kissed Me" and "Stay Awake". This set provided ticket holders with plenty of anticipation as DJ Wire first took to the stage alone to take his place at the decks.  While going 'solo' he mixed a variety of well known releases including "Sweet Dreams" by The Eurythmics, Skrillex's "Bangarang", The Prodigy's bonkers "Firestarter" and Bastille's huge hit "Pompeii".  People in front of the stage, including myself loved every minute of this extended and nostalgic intro. There were hands in the air, people up on the shoulders of their friends and relatives and a lot of dodgy dance moves.  Around 10 minutes in, on walked British rapper Example.  As he walked to the front of the stage he was singing the lyrics to his single "Say Nothing" which of course everyone else was also singing along to also.  He then went on to perform another single "Stay With Me" before then bringing the show to a brief pause to introduce himself by going on to say "Hi, I'm Example and I'm an up and coming artist from London".  Yea sure, he's not already famous at all. Haha! The bonkers set continued with performances of other well known singles including "We'll Be Coming Back" which was a Calvin Harris hit that he had featured on, also "Kickstarts" and his debut hit "Changed The Way You Kissed Me".  DJ Wire and Example put on one of the best live performances that I've seen to date. Despite Example looking a little tired (understandably) half way through his performance, he still gave us 110% to wow us all right until the close of the set. There were a lot of people there that evening all agreeing on one thing. DJ Wire and Example should have been the night's headline act.

The evening's headline act was female 80s pop trio Bananarama.  This is the first time that the band's original line up of Sara Dallin, Siobhan Fahey and Keren Woodwood has been seen performing live since the 1980s.  So this really was quite something to see.  Their performance at Amp Rocks was a first for the three ladies of the band as they have never performed live at a festival event before.  The band are very well known for their hit "Venus" 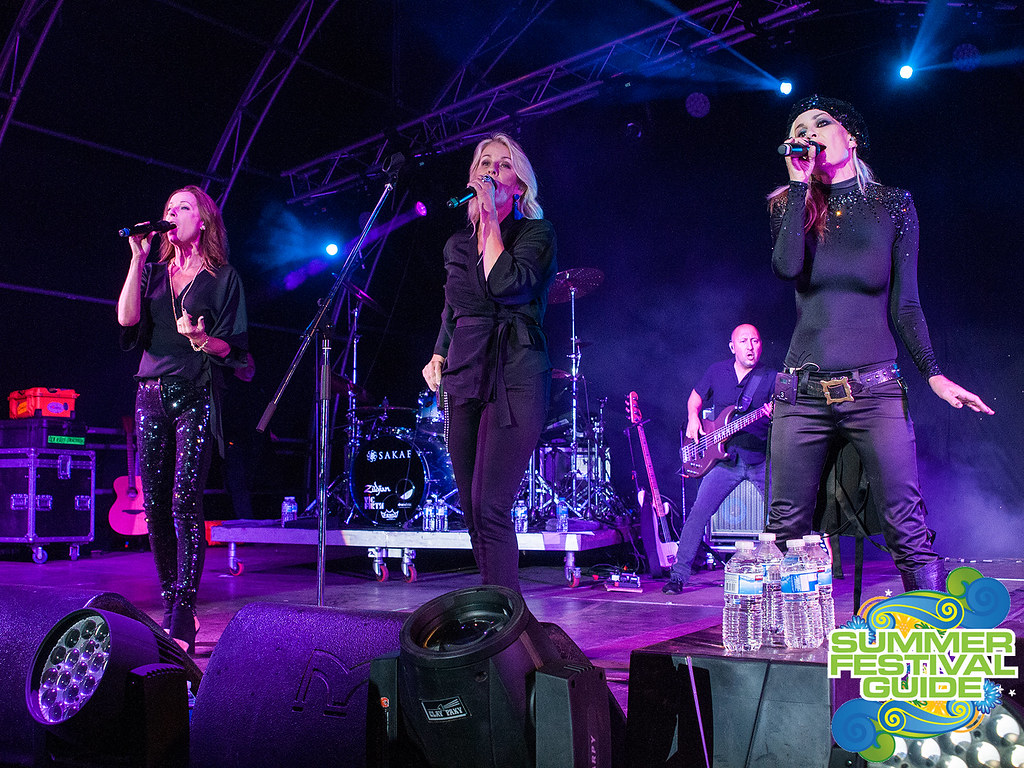 Before the ladies made their appearance, the stage was filled with warm lighting, pink and red in colour.  The band were given a lengthy instrumental intro by the musicians who also accompanied them on the stage.  The Bananarama ladies all looked stunning in their fitted black sequinned attire.  Their set really was a giant step back in time.  With a performance that included their classic catchy pop hits "Cruel Summer", "Rough Justice" and "Robert De Niro's Waiting".  During their show, the ladies were so perfectly in sync with their moves. While showcasing vintage choreography, it was like watching an Olympic synchronised swimming team, so easily breezing through their segment.  As much as I enjoy listening to the old Bananarama pop songs and they always put me in a great mood, but I must admit, the ladies are actually far better live and worth a watch. 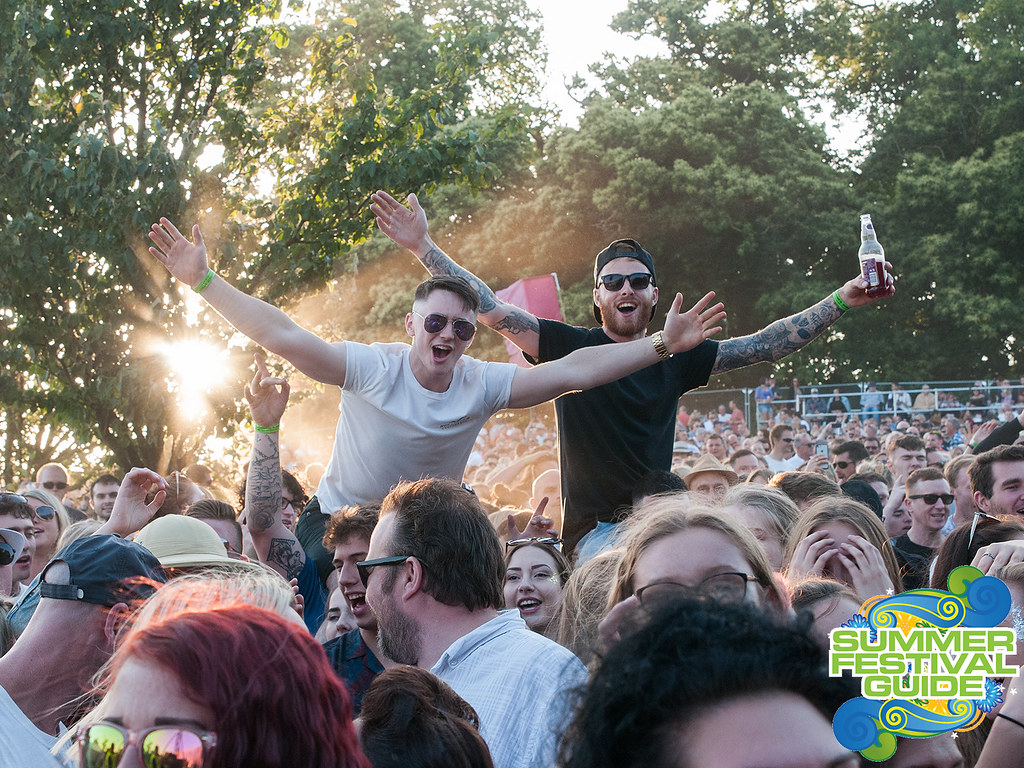 On multiple occasions throughout the evening, there were random outbursts of people going into full on karaoke mode to sing the infamous "Three Lions" in homage to the current football world cup event.  Both, Example and Bananarama sang along with crowds to show their support for England. It was quite the memorable moment during both sets.

The organisers of Ampthill Festival have once again, put on an amazing Amp Rocks for us all. I had a great night there.  I cannot wait to see what they will have in store for us next year.