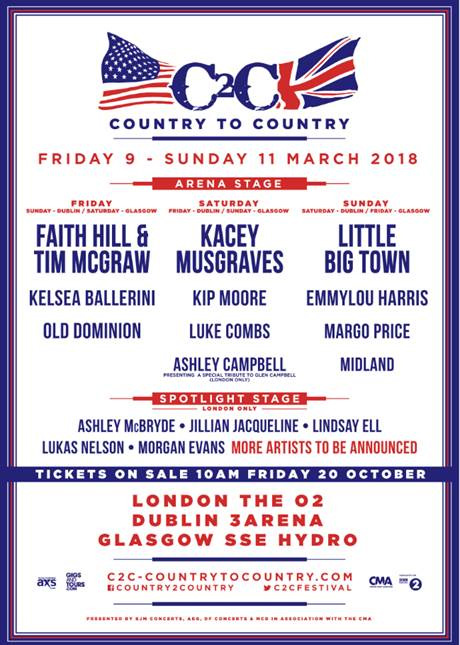 Country music in the UK? Not something you heard of much back in 2013 when the O2 Arena in London welcomed its very first C2C Festival. Telling people you were going to a country music festival was like telling people you were eloping. Fast forward to 2018, Country Music has started to become a bit bore acceptable to the mainstream, british artists such as The Shires are selling out tours and playing every festival that you can imagine, Ward Thomas secured a number one album slot for their second record Cartwheels and festivals across the UK are booking country artists more and more. It doesn't stop there though. Many C2C Alumni are starting to break into the scene as they collaborate with pop artists. Chris Stapleton started to blow up after his Brit Award performance with Justin Timberlake and has been charting ever since with his own material, Maren Morris had a top ten hit with her collaboration with Grey and Zedd for the song Middle and artists like Kacey Musgraves are playing some of the UK's biggest venues – country music in the UK is starting to be a thing.

So here we are 2018 and C2C has just had it's sixth festival. The first year was just the main arena and a few pop up stages with unknown acts but as the years have gone on, the festival stages surrounding the arena that take place in the day have become bigger and better, securing more known artists from all over.

The O2 is transformed into a mini Nashville during C2C Festival and fans are absolutely everywhere, it is heaving. The queues to get into each venue are very long and you get to experience full band shows to acoustic shows to songwriters rounds. Highlights on the pop up stages for many this year were Ashley McBryde , LANCO , Delta Rae , Danielle Bradbery and Lukas Nelson.

Then we have the main stage acts. In the last few years C2C has expanded from a two day event to a three day event by popular demand. This year, we, the UK were treated with a rarity of having Tim McGraw and wife Faith Hill headline. Tim and Faith headlined the Friday night in London and brought over their entire Soul 2 Soul tour which they have been touring the US with. As well as hearing songs they released as a pair, we got to hear their solo hits too sich as Tim's stunning track Humble & Kind and Faith's huge UK hit in the 90's This Kiss.

On Friday other main stage acts included the unmissable Old Dominion who are worthy of being UK chart toppers with their country pop sound, witty lyrics and exceptional performance skills. Old Dominion are not a band to overlook and you wouldn't even consider them country by UK standards. Songs such as Break Up With Him and No Such Thing As A Broken Heart created a strong sing a long atmosphere which was electric.

Kelsea Ballerini also took to the stage. Country's new pop princess, this wonder woman of the stage has it all, beauty, stage presence, killer vocals and one heck of great list of songs such as Peter Pan, Legends and I Hate Love Songs. Kelsea is heading towards being the biggest thing in country music, taking over a title Taylor Swift once had in the genre before going pop. Kelsea, newly wed to Morgan Evans brought her beau with her as he played the Spotlight Stage that night inside the O2 Arena in between main stage acts. Morgan, an Australian country artist won the crowd with his charm and his brilliant songs such as Kiss Somebody and I Do. Also on the Spotlight Stage that evening was rising star Brett Young who played the O2 Arena in October with Lady Antebellum. Brett had the entire arena singing along to his hit In Case You Didn't Know.

Saturdays main stage acts saw the UK debut of Luke Combs who is looking to be the next big male country artist. His rock country sound shook the O2 and left everyone in awe enabling him to sell out his London's Shepherds Bush Empire date in October this year which prompted him to add an extra date.

Following Luke was the UK's favourite US star Kip Moore. If you think you don't like country, listen to Kip Moore or better yet go and see him live on a whim and then think again about whether you like country or not. Kip Moore is ever the performer. Kip's mind blowing stage performance skills along with his fantastic band make you wonder why this guy is not the headliner of every festival going. Kip has a country rock voice that is so dang good and infectious that you could listen to him all day. Kip's three albums Up All Night, Wild Ones and Slowheart are some of the best material around in any genre, especially Wild Ones.

Taking stage after Kip was the eagerly anticipated return of country music duo Sugarland. Jennifer Nettles and Kristian Bush recently reformed and made their C2C debut which blew everyone away. Both Jennifer and Kristian have played C2C individually as solo artists but never as Sugarland, so this was a very special moment indeed. Sugarland filled the O2 Arena with so much energy and excitement with songs such as Stuck Like Glue that anyone who had to follow Luke, Kip and them had a hard task.

Set with that hard task was Kacey Musgraves. A radio 2 listeners favourite, people were concerned that Kacey and her mellow yet sassy music wouldn't quite cut it for a main stage act but how wrong the doubters were. Kacey pulled it out of the bag and then some. With her new album Golden Hour due out next week, Kacey treated the audience with her stunning new music as well as some of the classics such as Follow Your Arrow, Silver Lining and Merry Go Round to name a few. Kacey had upped her game since her last C2C performance and delivered a much more energetic and upbeat show – a show very worthy of a headline slot.

On the Spotlight stages on Saturday were Ashley McBryde who brought a more traditional country sound to the arena and enchanted her audience. Being the new IT girl in country music, Ashley left C2C being the most talked about artist from festival goers. Her songs Little Dive Bar in Dahlonega, American Scandal and Girl Going Nowhere created a storm big enough to pick her up and whiz her into a girl that is going everywhere.

Also on the Spotlight Stage was Jillian Jacqueline who made her UK debut last October as part of Country Music Week, Jillian's EP Side A is a stunning collection of modern country pop with some of the finest, sweetest and slick songs you will ever hear. Way beyond the boundaries of country music, Jillian needs to be a mainstream artist so do look her up.

Lukas Nelson son of legend Willie Nelson proved his worth and more on the Spotlight Stage. A country, soul, rock god this artist and his band Promise of The Real are as mainstage, headline worthy as the previously mentioned Kip Moore. A born performer, Lukas has so much to offer and became my highlight of the entire weekend and rocked the joint with his powerful tracks Find Yourself and Just Outside Of Austen. Lukas returns to the UK on July 10th for a show at London's The Garage so I highly recommend a visit.

Saturday also saw a truly stunning and emotional tribute to Glen Campbell which was delivered by his daughter Ashley Campbell. An artists in her own right and a phenomenal Banjo Player, Ashley gave us a medley of some of her fathers finest tracks such as Gentle On My Mind and Wichita Lineman. Ashleys performance was so powerful that the arena erupted and chanted for more.

Sundays main stage brought the UK debut of one of the most talked about new country bands in the US right now Midland. Bringing traditional back in both their music and fashion styles, Midland delivered one of the strongest performances across the weekend. Midland played tracks from their debut album On The Rocks and filled the arena with their insane performances of Drinkin' Problem, Make A Little and Check Cashin' Country. The trio captivated the O2 crowd and had everyone up and dancing to their slick, cool sound.

Following Midland was Americana artist Margo Price. Having had a televised Glastonbury performance, Margo has made quite the career in the UK recently. Margo impressed the crowd with her music, albeit slightly chilled out and a bit too mellow after Midland but she still held her own and gave a hell of a show which included a "drum off" with her bands drummer with two drums sets on stage delivering one awesome jamming session. Margo also brought Lukas Nelson on stage to perform with her for a song his dad Wille Nelson recorded with Margo called Learning To Lose.

After Margo was the legendary Emmylou Harris who undoubtedly put on a show stopping, flawless performance. Again, a bit laid back which isn't a bad thing, just a bit too chilled for the last night, Emmylou had one of the biggest and most respectable crowds yet as everyone in the arena stood for her entire set. To be able to say you have seen Emmylou Harris live is a rarity and something to treasure.

Closing the festival was another UK favourite Little Big Town. A vocal group so sensational, Little Big Town can do no wrong and always put on a performance that will blow your mind. Mesmerising doesn't quite do it enough justice, this band are the best of the best across all genres and vocally, no vocal group can beat them live. With one of the most impressive and much loved back catalogues which include Girl Crush, Boondocks and the Taylor Swift penned Better Man,Little Big Town played hit after hit and proved why they work so well together and why they are nominated for just about every award out there.

On Sundays Spotlight Stages were Canadian Country artist Lindsay Ell. Lindsay, best known for her insane guitar skills that put her up there with likes of Clapton,Lindsay showed the audience she was so much more than that with her beautiful vocals and amazing music from her newly released album The Project.

After Lindsay was Sony artist Russell Dickerson who brought a fresh, pop sound with his tracks Every Little Thing, Yours and Blue Tacoma. Russel is another artist to watch with his catchy, infectious music and will soon be all over the radio.

Last but far from least on the Spotlight Stage was Walker Hayes. Mixing hip hop with Country music, Walker had a lot of doubters who he soon converted into fans with just one song. Walker is quite the showman and stood in stage unaccompanied with just his guitar and loop pedal wowing the crowd with his songs Broke Up With Me , Shut Up Kenny and More.

All in All, this was one of the best C2C Festivals yet and stamps out all those stereotypes of country music being stetsons , boots and songs about trucks and beer.

C2C Festival is the place to be to discover new music and enjoy old music and a place to make you realise that you actually do like country music but never knew.