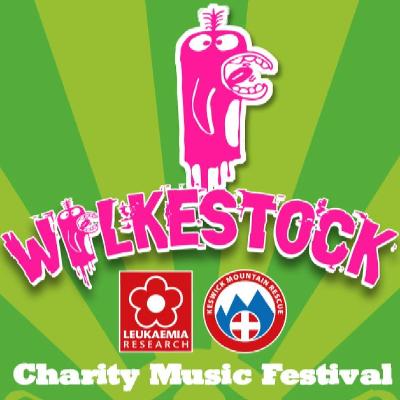 Wilkestock music festival is the Tardis of the summer event calendar….Small on the outside, big on the inside with a lot to offer.  With a theme of 'Wilkestock Wonderland' showcasing artwork of the infamous white rabbit and queen of hearts, the hertfordshire setting looked enchanting. This is an event where all of the proceeds go to charity. This year all of the proceeds were split between Leukaemia and Lymphoma Research and also Keswick Mountain Rescue. 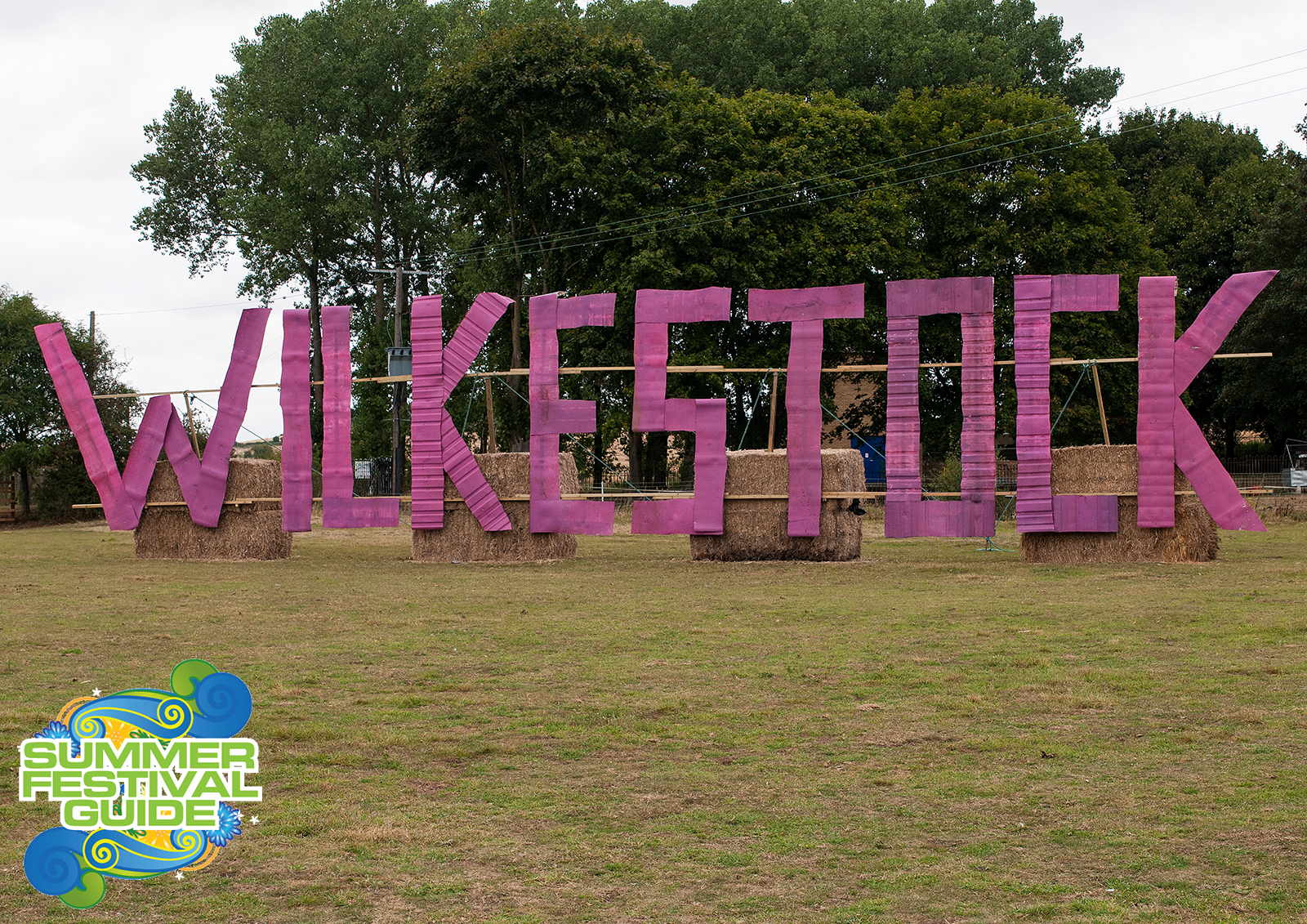 The festival was brought to life in 2006 by two brothers Tom and Olly Wilkes.  Originally a party for friends, the event just grew bigger each year. Last year's event in 2015 had over 1,500 people in attendance.

The organisers at wilkestock catered for all ages, the site included a bar that was styled  like a log cabin, sofa's scattered all around the grounds for a relaxed atmosphere and a 'kids area' which provided two bouncy castles, a cinema with toadstool seating and minature golf.  The most important part of the layout was the five music stages: Main stage, Bella Stage (BBC Introducing), Bangorang, Rock up & Rinse and The Doghouse.

I have to mention the variety of food. There may have only been a handful of vendors in the small food court area but there was certainly plenty to sink your teeth into. The traditional choice of burgers, chips and sub rolls from 'The Wingmen', fresh stonebaked pizzas, an ice cream van and something very different from 'Safari' an african themed caterer introducing exotic flavours such as ostritch, crocodile and zebra meats to festival goers.

Onto the main event! The music! The whole weekend provided a really good and varied line up but firstly lets take a trip back to Friday's acts.  Early in the afternoon we saw perfomances from Cardinal Kings, Timeless Lizards (who also performed an acoustic set on the BBC Introducing stage on the Saturday) and quite popular acoustic style singer Doug Sure who introduced himself as the guy that people expect to be the soundman for the stage set up who felt like he needed to tell some stories with his songs after previous band's heavy rock music styles. Sure performed oringinal singles such as 'Wishing Well' (which is a song about the grim reaper), 'Darling' and also a song of the audience's choice by a show of hands in the air, their left or their right. From this choice he then sang the classic Craig David single '7 Days'

One of the bands to watch on Friday were four piece indie rock band Paves. Straight out of the Reading and Leeds festivals this year. Great band but I do have to mention how much I loved the lead singers attire. He sported Mick Dundee Chic as I like to call it, in light coloured fitted trousers, a denim jacket and a cowboy hat. And yes I am referring to the character from the Crocodile Dundee films.

Other popular performers included the uniquely vocalled Dinges, JoCee (who sang a fantastic cover of The Spice Girls' single 'Say You'll Be There'), and the headliner warm up act  Eliza and the Bear – whose set included their biggest hits such as the one we all know from a particular cider advert on tv as the band themselves referred to. But unfortunately they were interrupted by two young girls climbing up onto the main stage to which was dealt with by the sound crew. This was a major security error and it should have been avoided.  Though the band did play on in a professional manner.

Time for Friday's headline act….The Subways! The band is made up of three members Billy Lunn (vocals and guitar), Charlotte Cooper (vocals and guitar) and drummer Josh Morgan.  An English rock band from Welwyn Garden City in Hertfordshire have seen great success since the releases of songs such as 'Rock and Roll Queen' and 'Oh yeah'. 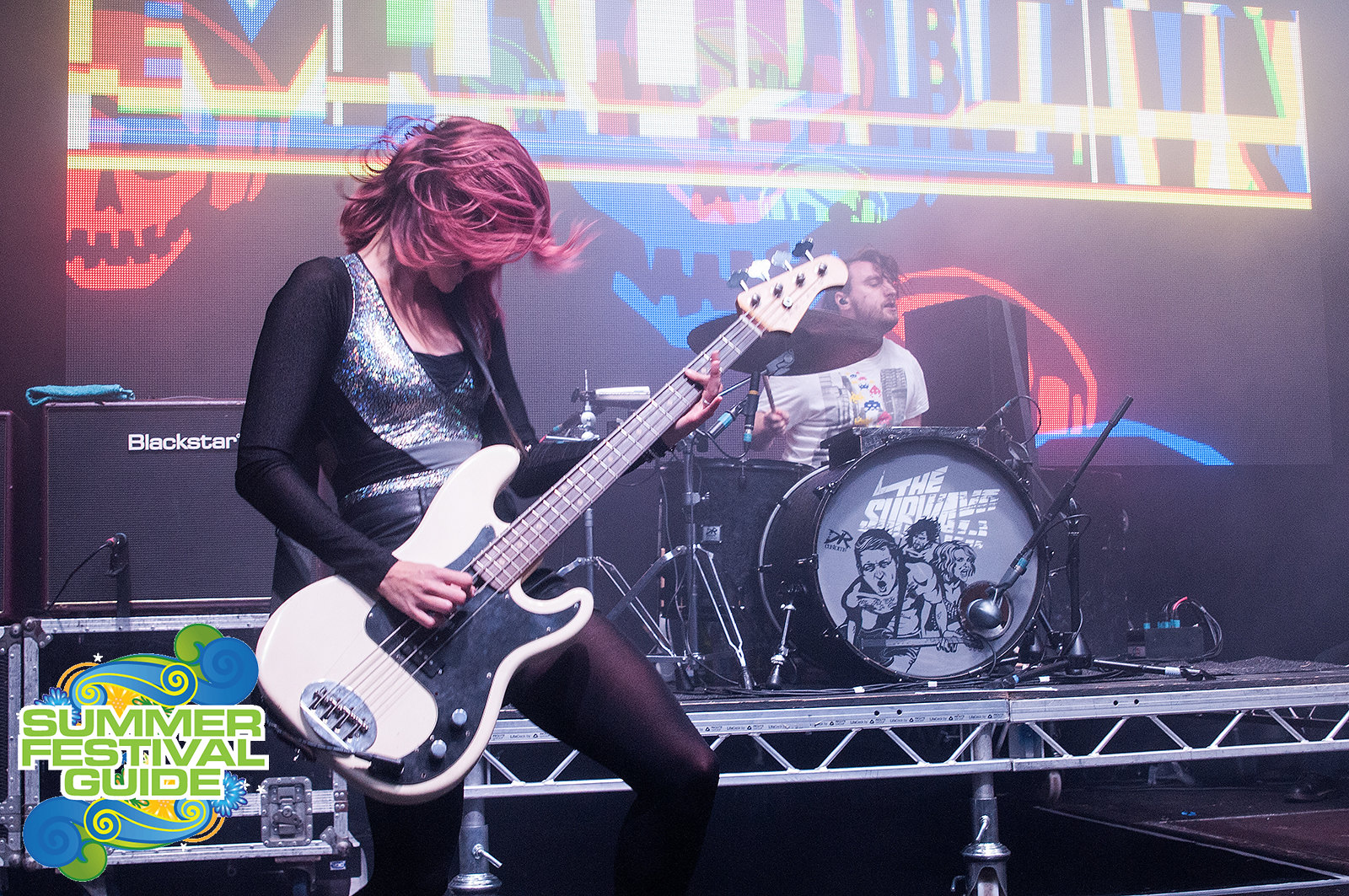 The energetic set from Friday's headliner saw lead singer Billy doing his well known rock and roll leaps and even climbing up to rock out on the drum kit. The band sang other well known hits including 'Dirty Muddy Paws', 'Kiss Kiss Bang Bang' and 'Good Times'. The audience revelled in rock and roll goodness by singing along to well known lyrics and even creating the stereotypical mosh pit. The band finished their set with their biggest hit 'Rock and Roll Queen' during this, huge confetti cannons were activated, filling the festival grounds with colour and excitement, with both adults and children alike creating confetti angels on the ground.

After a great day of festival frolicks that Friday had to offer, the following day had high expectations. The pressure was on! Unfortunately the weather was not ideal for a festival but the show did indeed go on. The place to be on Saturday was inside the enclosed Bella stage hosted by the team from BBC Introducing.  A highlight from early on in the day was the performance from husky voiced Tom Grennan. A bedfordshire based artist with his acoustic guitar and soulful-indie sounds.  He is certainly an act to look out for as he's already recorded a single with the huge Chase and Status called 'When it All Goes Wrong' and is about to support The Libertines at 02 Brixton academy on the 7th September 2016.

Another strong act of the day was four piece rock band Exit Black from Luton in Bedfordshire. The band performed a stripped back acoustic set with only two members: Tony on vocals and Joe on guitar. The duo performed original songs including: 'Memories' and 'Rise and Fall' encouraging the audience to sing along with them. The boys also performed a cover song requested by the BBC Introducing team which was a rendition of 'Maybe Tomorrow' originally by the Sterophonics.

There were three bands that really (pardon the pun) stood out in the crowd for me, one of which I have already mentioned (Exit Black), the second of those three, are the boys from Alexis Kings.  An up and coming rock band from St.Albans in hertfordshire who have already seen success from their debut single 'Squire' which reached the top 10 in the spotify charts. They performed other originals which included the very popular 'Strawberry Blonde'

One of the biggest crowd pleasers of the late afternoon were The Scruff. A quirky guitar pop-rock band.  With their crazy, trippy intro to their music and lack of clothing from the topless lead singer they really did bring something different to the stage. I can personally see a likeness to Blur and Madness with these guys.

Saturday's warm up acts for the headliner provided a large variety from the self labelled 'Dirty-pop' act Get Inuit, the glitzy set from The Jenova Collective and the big one before the big one (my third favourite act of the day) The Hunna.

Other than the highly anticipated live set from Mystery Jets, These guys were certainly not to be missed. The Hunna – who have gained over 1.75 million spotify streams, formed in October 2015 and have already made quite the name for themselves. The four piece indie-rock band's upcoming tour of the UK is almost a total sell out. It is clear that these guys are aiming for domination in the music industry. Their cleverly titled debut album '100' went straight into the top 20 of the official UK album charts. Not only did The Hunna provide an amazing warm up show for the headliner on main stage but they also did an acoustic set earlier on in the day with just two of the band members. They provided us with lyrical beauties including 'Bonfire', 'Still Got Blood', 'Brother', 'You and Me' and 'Bad For You'. 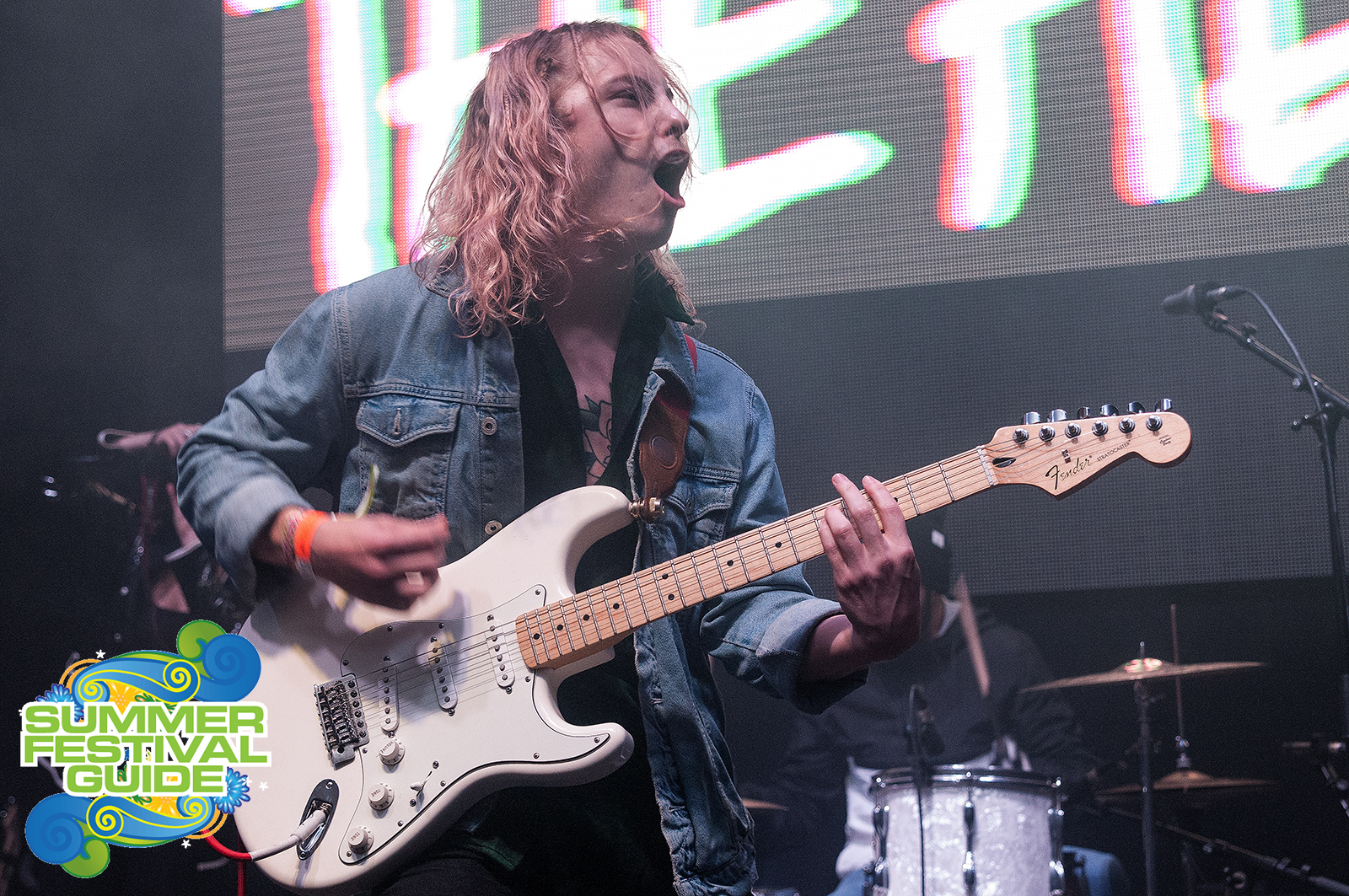 Drum roll please…Please welcome to the stage, Saturday's healine act. Mystery Jets! Formed in 2003 and six albums later the band are still going strong and ever popular with their loyal fanbase. Despite the soggy weather, the site was filled great vibes. With a quick adjustment of the microphone stand and a wave to the audience the band kicked things off with 'Telomere' then diving straight into 'Serotonin'.  Amoungst the huge crowds of people under the bright lights coming from the main stage were photographers, people recording from their mobile devices, some groovy movers (including the food vendors with drinks in hand) and even a small toddler dancing along in a Captain America costume. How adorable! 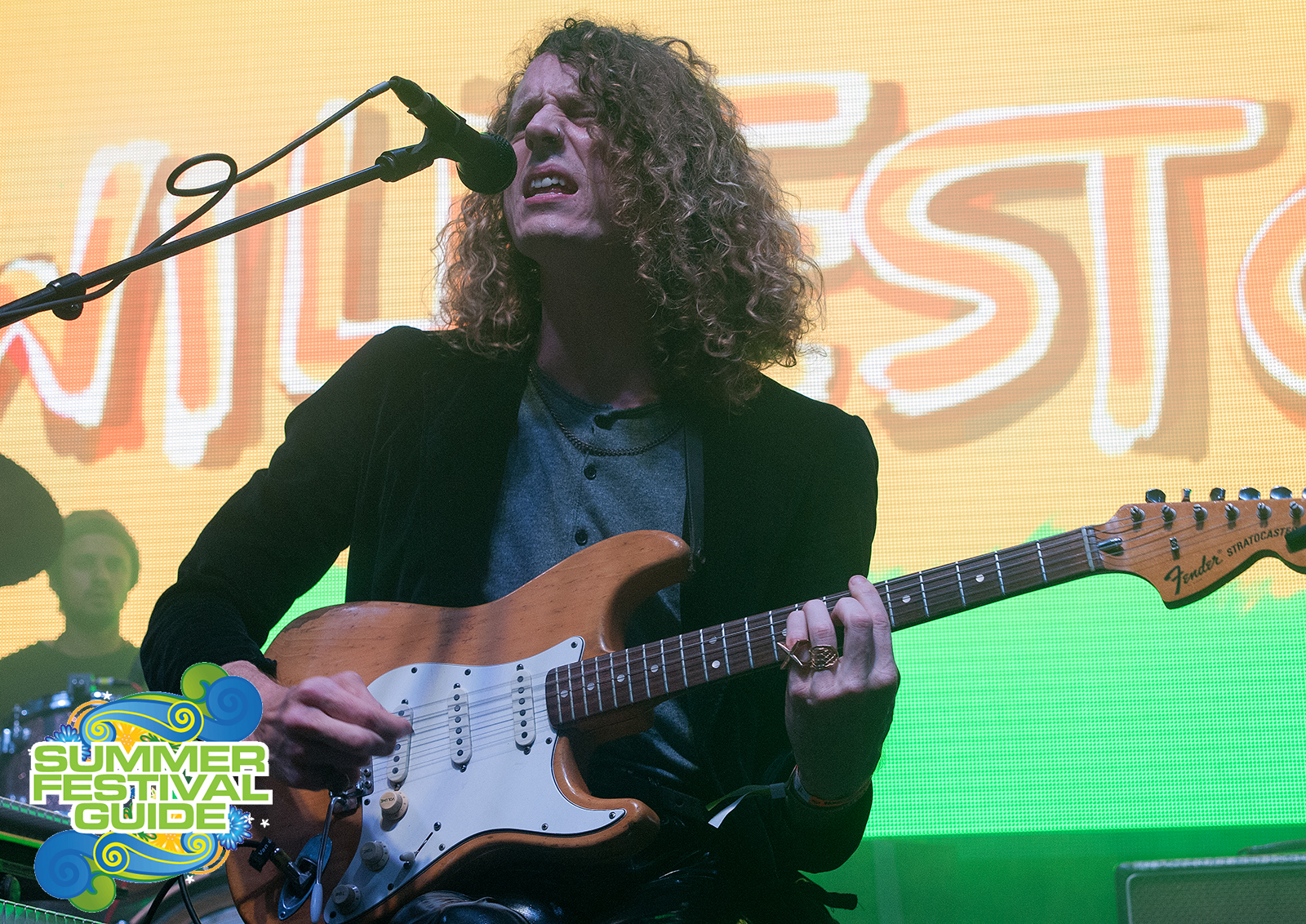 Mystery Jets also performed other rocking hits like 'Two Doors Down', their latest single 'Bubblegum' and 'Half in Love With Elizabeth' before then finishing their awesome show with 'Alice Springs'

All in all, I had a great time at this festival and I would highly recommend it to everyone I know. An allrounder with lots to do and see. Bring on Wilkestock 2017!