Home > Reviews > House of Common – The Meaning of Madness 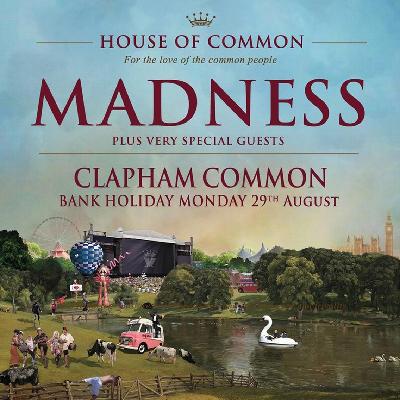 The last bank holiday Monday of the year is known for many things: appalling weather, interspersed with glimpses of sun, a desperation to get the last drops of summer and a powerful desire to forget about work tomorrow and enjoy music for what it is. For me, this weekend has alway been significant for the Notting Hill Carnival. For years I would spend my bank holiday Sunday and Monday wandering around the street of West London, taking in the sweets sights, smells and sounds of the caribbean. Today was different. Today I found myself heading down to the leafy and spacious surrounds of Clapham Common for the Madness headlined ‘House of Common’.

This appealed to me, for even if I was missing out on my jerk chicken, goat curry and cans of Red Stripe, I would be getting, for the first time, to see a band that has always been one of my guilty pleasures. You see I spent my time at school “smashing up the woodwork tools” while humming along to the catchy notes of ska and new wave that these veterans of the 70s and 80s proudly blared out. Madness was to be supported by a variety of reggae, ska, hip-hop and grime acts. Four years ago they helped open the London Olympics. They brought the mellow tones of 'our house' to

the assembled audience of the entire world amidst a vision of a welcoming city.

Four years later and the messages of that night continue to hold true. London is still the global capital that is was and music is still what makes us great, but things have changed. Do we still have the heady optimism of 2012 or has it been replaced by something a little darker and realistic? I hoped that perhaps seeing this band that has stuck to the same routine would be comforting, delivering that nostalgic quality that in our dark and dangerous world is ever more appealing.

So what is Madness? Is it just a nostalgic throwback to a simpler time when the multi ethnic tones of a gang of guys from Camden Town, or is it something deeper?  A reminder that the Britain we live in is no longer the one they played to, but rather one shaped by that very era. Well I was set to find out, but there were other artists to take in too.

First up, Toots and the Maytals delivered classic reggae to a crowd elevated by the hot sun shining down. The juxtaposition between the setting and the music was noticeable, with the latter closer to Kingston-upon-Thames than Jamaica. There was the weird vibe of a  quietness of a crowd unsure of how act. Fans of reggae everywhere, but few willing to let loose. Camera phones and tattoos were on show, but this felt more like a cultural exchange than a happy marriage between audience and artists. Before I had a chance to ponder this further, we were dashing to the second stage to take in Ms Dynamite.

From the lofty climes of Archway, this world famous singer and entertainer was one of the highlights of the supporting acts – whose names were so small below ‘Madness’ on the billing, that corrective eyewear was needed to read clearly. She blasted off with her eponymous track followed up with an increasingly heavy set bringing in a blend of the urban rhythms of hip-hop, grime and UK garage.  A crowd of all ages and personalities were going crazy for the heavy beats. Next on the stage was Mike Skinner & Murkage. The temperature was rising and this was an indisputably London sound. Echoes of Streets fame, were mixed enthusiastically with a more a more edgy feel. As balloons were punched back between the stage and crowd, everyone was jumping in sweaty unison. We ducked out for chilled cans of cider, and bumped into a very friendly Ms Dynamite backstage.

David Rodigan was the final act before Madness on the main stage. ‘Girl I want to Make You Sweat’ was the first track, with the audience now feeling the love and singing in unison. The Marley classics continued with ‘The Sun is Shining’ appropriately dropped on the crowd as the sun finally went down. Good vibrations were in play and the atmosphere couldn't fit middle class suburbia any better as Rodigan exclaimed that all were welcome "if you love the original sound of Jamaica", this was the intro to Jimmy Cliff’s ‘Wonderful World Beautiful People’ that gave way in seconds to ‘You Can Get it if you Really Want’. The performance was fast food reggae. Loud, plentiful, very quick and really very satisfying. Delivered song by song like reggae reggae sauce in pill form, it gives people from all over the country a taste of something exotic. Walking out of back-stage we were knocked into by a guy in a West ham shirt screaming "I want to see mike Skinner now"! Only seconds later we heard that at the last moment the Madness team had decided they wanted no photographers (or cider drinking writers) in the enclosure for their headline set. Somewhat shocked and disappointed we were in an Uber not long later.

Tomorrow is a workday and real life resumes. Until then, the laid back rhythms of London Town and its proud Caribbean heritage offer a real escape from the humdrum of life in this very same city. So in truth, I can’t tell you the meaning of madness but I can say that ‘House of Common’ was a fairly good place to get away from it.