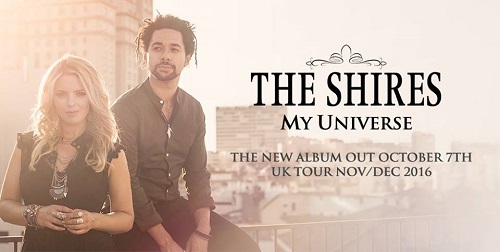 UK Country Music duo The Shires held a secret launch party at Embankment One in London on Thursday July 14th.

The purpose of the event was to showcase new songs that will feature on The Shires second album MY UNIVERSE which is to be released October 7th.

Fans had to enter a contest to gain access to this event which held only a couple of hundred people. At 6pm doors opened and fans were lead up some stairs then down again to a standing area in front of a stage. The balcony was held for press and media outlets as well as family and friends including co writers to some of The Shires songs Nina Nesbitt and Twinnie Lee Moore and new country duo Darline. There were very many familiar faces amongst the fans, some of whom had been strong supporters of The Shires since the very beginning of their career back in 2014 when their first single Nashville Grey Skies was released.

Bob Harris-Radio 2 DJ and Country Music fan who hosts a Country Radio hour every Thursday at 7pm – introduced the duo before they took to the stage. Ben Earle and Crissie Rhodes who make up The Shires, then came on stage after their band played the intro to Nashville Grey Skies. The audience cheering and applauding their arrival set a great atmosphere. The fans sang along to every word with The Shires as they looked into the crowd smiling and waving to those they recognised.

Addressing the crowd and briefly talking about their career journey so far, The Shires introduced new song I’m not even drunk right now which was a fun up- beat track and I can see becoming a crowd pleaser at future shows. Beats To Your Rhythm was the next new song which was more of a repetitive song but a good fast paced song with a much more rocky sound than Shires fans are used to. Title track to new album My Universe seemed more of an anthem track with uplifting lyrics and a nice melody. As well as adding a more rocky sound to their material, The Shires have stayed true to their stylings, especially with their talent to always produce stunning ballads, so fans were left very emotional and entranced during the beautiful heart wrenching Daddy’s Little Girl, a song written by Crissie about her late Father.

Glad to have been able to get through the song wthout crying, Crissie thanked the audience as Ben took to the keyboard ready for next new song Naked followed by title song from the last album Brave, which is a fan favourite for many reasons as the lyrics mean so much to many people. Members from Crissie's Gospel choir joined them on stage for the song A Thousand Hallelujahs. Of course, there were not a thousand hallejuhas in the song as Ben too jokes. The gospel choir were flawless and gave the song that oomph to deliver a more powerful sound.

The Shires said their goodbyes as they left the stage. After much crowd chanting, they returned to the stage with new song Desperate which Crissie tells us almost did not make the album but she insisted upon it being included.

After the show The Shires held a meet and greet for the fans which was in a photo booth and there were various props people could use to wear for fun. Unfortunately, due to time, I could not stay for this but I heard that it was great fun and that The Shires were very chatty and grateful to each and every fan.

Going by the songs that I have heard tonight, I can say with confidence that I think the new album My Universe is going to be spectacular. I am very much looking forward to it and have already pre ordered my copy.

The Shires new album My Universe will be released October 7th and they have also announced a Tour for the end of November and December. Please see the press release below for pre order details and pre sale ticket info:

Fresh from a triumphant headline set on Glastonbury’s Acoustic Stage, UK country duo The Shires have just announced they will be touring the UK later this year. The tour will see the critically acclaimed pair play tracks from their forthcoming album, alongside fan favourites from their gold selling debut ‘Brave’ to gig goers up and down the country finishing at London’s prestigious O2 Shepherd’s Bush Empire. Ben Earle stated: “It’s something magical to be on stage and sharing your songs and seeing the fans’ reaction. We’re particularly excited to share our new tracks with the fans on this tour.”

Last night, Crissie and Ben gave fans a chance to hear some of their new tracks when they played a secret album launch show at London’s One Embankment. Previewing songs from their forthcoming second album ‘My Universe’, which will be released on 7th October, The Shires showcased how recording in Music City: Nashville has further honed their songwriting craft for making clever and catchy Country-Pop that continues to push the genre into the UK mainstream. Last year, they were one of only a handful of British acts to see their debut release certified Gold alongside Jess Glynne, James Bay and Years & Years. The first UK country act ever to have a top 10 album in their home country, The Shires have been at the forefront of the British Country music movement which has seen a sea change in the opinion of the British public, who have embraced the genre and UK bands making music inspired by US country artists.

Eager fans can secure their tickets for the tour when they pre-order a special edition of the new album at HMV before midnight on Monday 18th July. The HMV exclusive edition of ‘My Universe’ includes exclusive artwork and two bonus tracks. Those who order the album before midnight Monday 18th July will receive a unique code to give them access to the tour ticket pre-sale from 9am Thursday 21st July before general on-sale at 9am Friday July 22nd.

On recording the new album in Nashville, The Shires said, ,“It was great to go back to Nashville. This time we had a different approach as we knew it better and we practically lived there. We have friends there now and for some reason when you write and record there you just feel more inspired. It definitely comes through in the new music.”

The band are already making Country the soundtrack to the summer performing at a series of high profile music festivals and events including Platform and Lakes Festivals this weekend and Bracknell, Lytham, Castle Roc, Cottingham and supporting Sir Tom Jones at Bedford Park still to come. This follows their headline debut at Glastonbury Festival last month and Cornbury Festival last weekend.

The live dates will follow an intense period of song writing for the Shires, who have been working on their new album in Music City: Nashville. Ben and Crissie co-wrote some tracks with top country music writers including Kip Moore and recorded their album at Sound Stage Studios, one of the most prestigious recording studios in Nashville, which has cut records for other country superstars such as Carrie Underwood, Tim McGraw and Lady Antebellum. They also graced the stage at the famous Grand Ole Opry and can add their name to Dolly Parton, Hank Williams, Garth Brooks and a veritable who’s who of Country music who have played at the famous Nashville landmark venue.

Here’s where fans can catch The Shires on their UK tour later this year:

The band will also be performing at the following festivals this summer: