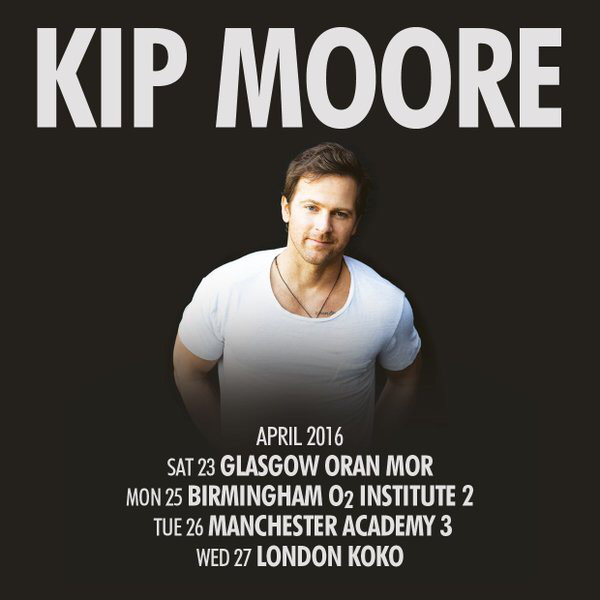 So, firstly I am going to say if Kip is touring near you and you haven’t quite got tickets yet, then my goodness GET THEM! The only regret you will have is not going. If you have not heard Kip’s music, then go listen to it – you will not be sorry. If you are not a Country Music fan then don’t worry, as Kip is so much more; he brings a rocky edge to Country, almost creating his own genre. His current album 'Wild Ones', has quickly become one of my favourite albums of all time. His voice is unique – he does not have the stereotypical sound or style that you would often expect to find in a Country musician.

As a fan of Kip Moore for some time, I had actually given up hope of ever seeing him live in the UK. I had a friend in the US who saw him regularly and kept telling me how amazing he was live. The only experience I had ever had of seeing him live at that point was outside the CMT Awards in Nashville in 2014, doing a sound check of Beer Money about four times. Going back to 2015, when it was announced that Kip was playing in UK’s biggest Country Music Festival C2C, I was beyond excited – especially as it made a line up that I was not particularly fussed about, become appealing. Now I mention C2C, not just because it was Kip’s first time playing in the UK, but because for me and many, many others, he stole the show for the whole weekend – despite being first on the billing, and being up against huge names such as Jason Aldean and Lady Antebellum. That night Kip made a promise to return and, thank god, he actually kept that promise – as many others haven’t or have, but left it a long time before returning.

Kip Moore’s UK tour was announced around the time of this year’s Country 2 Country (C2C) Festival which, in marketing terms, was a very good move, especially when he was covering quite a bit of ground over the UK – and at a more than reasonable price of around £14 a ticket. Not only did Kip sell out his London date but also some of the original venues he was playing at, in places such as Manchester, had to be upgraded to a bigger site as the ticket sales were that good. Good going Kip! As a regular attendee of London gigs, I actually chose to go to Birmingham this time, as it was just more practical in terms of travel.

I rocked up to the Birmingham Institute at around 3.30pm, after foolishly turning up at The 02 Academy first – ha! I later discovered at least one other lady made the same mistake, so I wasn’t alone! A queue full of die-hard Kip fans, some going to more than one show, made the time pass really quickly, as we had a lot in common and also conversation never runs dry amongst Country fans.

The support act was Max Milner, who auditioned on the UK Voice a few years back and made it quite far on the show, but did not win. He is not a Country artist so I was a bit concerned that I might not enjoy his music and shamefully assumed, without doing any research, that he was going to be awful dried up pop! Well…out he came, on his own, no band – just him and his guitar – and as soon as he started to sing, he blew the crowd away. Max has a very soulful voice and in part reminded me of Ray Lamontagne. He also sounded vocally and musically similar to early Jason Mraz songs, back around the time when Jason performed live at Java Joe’s. Personality and wit as well as being musically flawless, Max was someone I was going to remember – and what a great warm up for a very promising night.

At the front row barrier, the excitement and atmosphere around me was heaving. When the lights went down and the crowd cheered, Kip’s band, The Slow Hearts, took to the stage and played the intro to Wild Ones, from his current album with the same title. I guessed he would start with this song, just because it is so atmospheric and fitting to start the gig with – and definitely had the crowd going and singing along.

I was fangirling throughout the whole gig. What can I say? Kip just brings it out of you. Now I have read in an interview that Kip likes to stare into the eyes of women in the front row when he is singing, just to see their reaction and see who can engage in to his look. Well, they weren’t lying. He did this a lot, much to every woman’s joy – including my own. I actually felt like I was special just for that brief moment – ha! This is something I usually cringe at, but he almost had me screaming like the girls at a Justin Bieber concert – oh, the shame! But I managed to hold back, thankfully.

Playing every song on the Wild Ones album, apart from two (Lipstick and Come Back Kid), he also did a fair amount from his previous album Up All Night, as well as the unreleased in the UK song Dirt Road – a fan favourite, which I was so pleased that he sang. it was obvious Kip wanted to give his fans more than they’d paid for, not only with a longer than usual set list but also giving one hell of a performance throughout, not giving the audience even one second to lose interest and check their phones. Pretty much every song, in particular songs such as Beer Money, Come And Get It, I’m To Blame, Somethin’ ‘bout A Truck, What Ya Got On Tonight and Dirt Road, had the crowd fist pumping the air and jumping around. The crowd interaction during Heart’s Desire was a moment that I don’t think Kip will ever forget. He genuinely seemed surprised at the fact the crowd knew every word to every song.

We were also treated with new songs, one being a song called Guitar Man. Kip tells us the inspiration behind this song was from a young guy he saw playing in Nashville airport for tips and how he remembers doing the same at his age. We were also told the story of the woman he left behind years back, because she had no faith in his making it in the industry – so a verse was dedicated to her in very much a “screw you, look at me now” way.

Guitar man was part of the acoustic section of the night, where the band left just Kip and his guitar on stage to sing a few songs. He sat on a stool, addressing the crowd on several occasions including stating that “his people” tried to push back a UK tour by one year as he did not have the fan base yet – but he knew he did and argued it and won. We are so glad he persisted and – let this be a lesson to you management and labels – do your research; the UK is heaving with Country Music fans – just look at the size of C2C.

The only thing to disrupt the night was that, during this acoustic set, there was a woman up in the top seats yelling “Take your shirt off” during his song Complicated. OK, it was funny once, but she must have said it about ten times, not only annoying the audience, who ended up booing her, but annoying Kip too. I must add he handled the situation gracefully and even made up a verse for her on the spot about not taking off his shirt but she can take off hers. The acoustic set was a really special moment for me. It was so nice to hear some of Kip’s rocky, raw songs stripped down – such as Girl Of The Summer, which was acoustically beautiful. It completely changed the song making the lyrics stand out a lot more than on the studio version as you really paid attention to them during the acoustic version.

The band returned to the stage and Kip explained how a lot of artists change their band regularly but how he has kept the same band for eight years. It really showed actually – Kip Moore and The Slow Hearts play well together and you can tell they are also good friends. There was a lot of interaction and respect for each other during their performance and so much talent as a band – and individually too.

On his tour stops so far, Kip had done an after-show outside the venue singing a few songs on the street. However, this was not the case for us in Birmingham, as I later found out he was shooting a music video straight after, which many fans got to witness, although, unfortunately I could not stay. Kip also went to the merchandise booth straight after the show to sign for every single fan who wanted an autograph, which was amazing – how many artists can you say would actually do that? It’s nice to see how grateful Kip is to his fan base. He also did this at the C2C festival and was reportedly signing for around three hours. Now that’s commitment!

This was only the second gig I have ever been to alone and I had so much fun. I really got to let go and fully enjoy myself and it was lovely meeting new people too. I hope Kip comes back soon, he is such a revelation live and quite frankly..makes Country look cool – which it is, of course!