FacebookTweet
It's Friday night, the sun has set over the Bestivalley and the crowd is a sea of sequins and glowsticks…‎ 80's kings Duran Duran make a spot-lit dramatic entrance dressed in monochrome leather, and the packed arena roars in anticipation of some straight up ‎guilty pleasure.
Starting strong with stage pyrotechnics and huge AV backdrops, this is power pop turned up a notch and 'Hungry Like the Wolf' is met with howls of appreciation around the arena. There are more than a few drunken impersonations of wolfiness.
Bond theme 'View to a Kill' is special for Bestival regulars as it's also the film another Bestival diva‎ Grace Jones (2008) was in. Calling out to the crowd"Looking out at all of your happy faces… we just realised this is the most important gig of our career" the band touch on something we hear quite often here, that special atmosphere you only get at this festival is picked up by artists every year.‎ With the new album being released today, 'Out In The City' is all new, techno and modern, it probably is the most important gig for their new album – an arena full of new ears and fans alike.
Photo courtesty of Bestival
As lead vocalist Simon LeBon tootles along on an electronic ocarina, the crowd joins I'm singing along to 'Reflex'. Offering the mic to keyboard wizard Nick Rhodes, who deadpans "there are far too many people here". In fairness, this might be the biggest and youngest crowd Duran Duran have seen in a while, UK festivals get bigger every year and it's far more faces than any arena tour could be.
Following on with a Duran Duran classic, "We relased our first song in 1981… we're here thirty years later, playing it to you… this is Ordinary World"‎ and the B.I.G appropriated refrain 'Notorius' has everyone yelling along. New single 'Pressure Off' is suitably promoted with a huge explosion of pink and white ticker tape, it's funky and completely unlike the other new song, setting up the album to be a fairly varied affair.
As the first spits of rain come down, 'Girls on Film' picks everyone up, and there isn't a single person who isn't attempting to sassy Vogue along with them.
Coming back on for a encore with a 1978 Summer of Love ringer tshirt, 'White Lights'‎ shows the days of lighters is well and truly over "If you have a mobile phone, get it out and hold it up, we're filming this, we want it to look like the stars". Finishing up with hits 'Save a Prayer' and 'Rio' have the entire arena bouncing, after a thoroughly brilliant set. Even the rain can't dampen the spirits of this crowd. 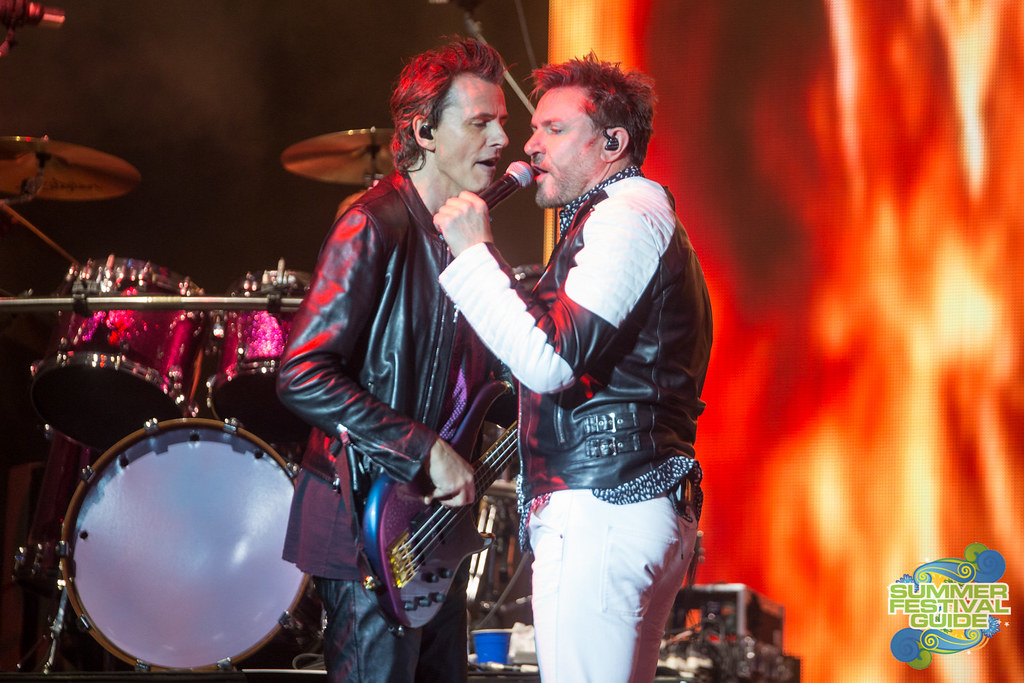