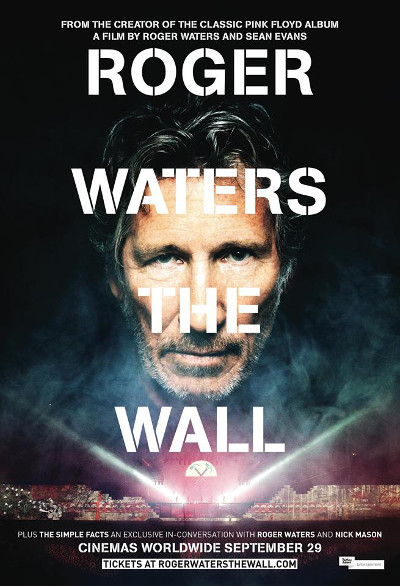 Whilst the point of The Wall as an album was to bring to life Waters' experiences growing up having never met his father in austere post-war Britain, achieving world fame as a rockstar and his eventual isolation, the angle of this revitalised production appears to be Roger sharing with the audience his journey of closure.

The movie follows the recent world tour of The Wall, showcasing precisely what the fathers of the Azimuth Co-ordinator have always done best – incredibly well-structured concept albums brought to life with state-of-the-art technology in the world's finest arenas. This tour was no exception.

Anyway, enough about the marvel that was Pink Floyd. You can buy me a pint if you want to hear me ramble on about how great they were together. This concept is dedicated to fallen loved ones.

Co-directed by tour production manager Sean Evans, the beautifully injected cinematography follows Waters on a personal drive through Thiepval, memorial to the missing of the Somme, to a memorial for his father's heroic actions in a war cemetery in Cassino, south of Rome.

With stellar supporting musicianship from veteran rockers Snowy White (Thin Lizzy), G. E. Smith (Hall&Oates) and Dave Kilminster (Keith Emerson/Steven Wilson), the feeling of being at the show is not lost from the footage. Beautifully mastered live recordings in Dolby Surround Sound certainly bring Robbie Wyckoff's supporting vocals to life alongside soaring bombers and the classic sounds of Floyd.

This effort certainly gives a sense of closure to the whole "The Wall" saga. With almost 35 years passing since the album's recording and roughly 25 years since the psychedelic Gerald Scarfe infused film, this production truly marks a milestone in Waters' career.

Ultimately, every end product from this franchise is an outlet for Waters' self obsessive quest to conquer his inner demons, whilst being determined to succeed more than his former band mates and to do his father proud. I'm of the ilk who agrees that the popular, standardised tracks off The Wall are the ones co-written by The rest of Pink Floyd, though these have never drawn attention away from the rest of the lyrics on the album, which must be one of the most socially relevant and hard-hitting musical concepts in history.

Achieving Gold, Platinum and Diamond sales across the world to date, The Wall continues to force-feed the audience with Waters' commentary on capitalism, fascism and a whole bunch of other 'isms' purporting to Fairbairn's Object Relations Theory, a possibly undeveloped Oedipus complex and the Fathers of Modern Psychology.

Nice one Rog! Now maybe you can finally write some new, equally inspirational and hard-hitting music!

You can check out Roger Waters The Wall in cinemas across the globe from Tuesday September 29th at 8pm for ONE NIGHT ONLY!

Get your tickets from http://rogerwatersthewall.com/