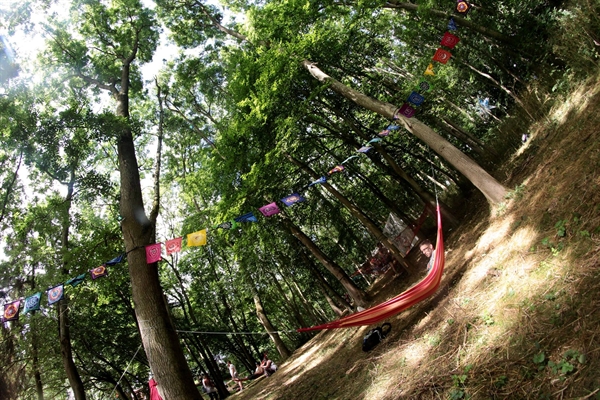 Miles away from the hustle and bustle of the city, in the rolling hills of the secluded Leicestershire countryside, the ground was once again shaking as Noisily returned for its forth year. With a tantalising line up for any electronic dance music fan, this festival brings you the best acts from the UK and abroad, including MC Xander and Whyt Noyz  both from the UK, Stephan Bodzin (DE), Grouch (NZ), Parasense (Russia) and The Outsiders (Israel) as well as Brazilian techno giant Victor Ruiz. From Psytrance to techno and glitch-hop to house, Noisily enlightens you on a journey of music.

In Orbit did the décor for the tree house stage, where MC Xander, ODJBox and Specimen A headlined. Most of the décor throughout the festival was done by Liquid Fairies who are highly recognised in the psychedelic festival scene, their attention to detail is second to none including the golden kite bird décor on the crown of the Liquid stage as a nod to the birds which surrounded them during the build.
Within an hour of the festival opening, everyone was exploring their new wooden playground that they would call home for the next 3 days – the hammocks in the shaded woodlands area were a popular addition, providing a chilled out vibe.

The main stages are Liquid (from Glade/Liquid records )(Psytrance), Noisily (Techno), and Treehouse (from Glitch & NeuroHop, Mid Tempo to Bassline House and Electro through to Drum and Bass, Dub and other genres).  As well as having 3 main stages Noisily also has several sub stages: Nicholas Cage, Yeti Tent and Bassport Gazebo (Bassport takeover the Treehouse stage at 9pm Sunday with Drum and Bass). There are 3 main bars close to the main stages, apart from the cocktail bar which overlooked the festival from the hill.

Psychedelic dream temple was here this year on the first leg of its European tour showcasing 18 international artists, and headed up the list of performance and circus artists.

With what started as a gathering of 500 people back in 2012, has now grown and expanded into Noisily festival as we see it today – which welcomed just under 3000 festival-goers in 2015.

With its high production values, diverse line-up and unique atmosphere, Noisily has already put itself on the map for small festivals.