Awarded 'Best Metropolitan Festival 2014' and due to celebrate its 10th birthday next year things are going pretty well for Live at Leeds currently. One of a growing number of urban music festivals, there are some distinct advantages to be had from avoiding the expense and mud of the established camping festivals, and you get to sleep in a bed at the end of the day! Crucially though, there is a huge range of acts across multiple stages – and all at a very reasonable price tag of £27.50.

Based on an ethos of promoting up and coming bands, particularly local ones, the festival has given early career appearances in recent years for the likes of Jake Bugg, Rudimental and Royal Blood. However, a smattering of established acts are always on hand for those less adventurous punters with The Cribs, Gaz Coombs and experimental-punk-rock legend Thurston Moore all on the bill this year.

Legendary status comes in all forms and for the Leeds music scene it's a venue – in this case the Brudenell Social Club where things kicked off for me in impressive style with St. Petersburg's Pinkshinyultrablast doing their very best to revive the early 1990's British shoegaze sound. Fresh from a Radio 6 session earlier in the week their wall of sound comprising effects heavy guitar, synth and driving drum beat is well constructed and pleasingly reminiscent of their forebearers: Ride, My Bloody Valentine etc with perhaps even some Cocteau Twins thrown in for good measure. Next door on the smaller games room stage is Lancaster's Lake Komo offering up sweet pop melodies echoing somewhat The Magic Numbers. Back on the Brudenell main stage the fabulous Broncho from Oklahoma are in full swing. A raggle taggle bunch of skinny scruffs with ripped jeans, their twitchy, urgent Americana-punk is Ramones / Stooges inspired and has the afternoon audience bouncing joyously at the front. 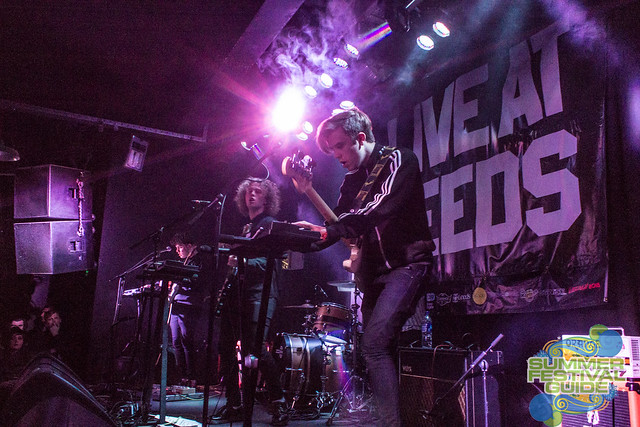 In town at one of the bigger venues, Leeds Beckett University main stage I caught local band Hookworms' set of synth-led droning psychedelic rock. It's clearly a sound these boys take very seriously – powerful and confident; undoubtedly a band to watch for the future. Over the road Palma Violets open as they mean to go on with their driving, heavy blues rock sing-along anthems, sending a packed Leeds Town Hall into euphoria. Fans sitting on shoulders, jumping up and down, fists in the air: this is rock'n'roll as it should be – inspirational and ecstatic. On leaving the venue the queue for The Cribs was round the block leaving me questioning whether I would be able to get back in for the headliners but I was determined to catch Eagulls back at the student union, and was glad I made the effort. In the home of goth these Leeds locals are doing an admirable job of keeping the genre alive. The influence of Sisters of Mercy and The Mission is evident here using many conventions we have come to associate with that often, but unfairly, derided sound – scything guitar, walls of screechy feedback and a fabulously gaunt, waily voiced front man, complete with black over-coat.

Next up is Thurston Moore and his roots in experimentation and pushing the boundaries of New York's 1980's hard-core punk scene with his band Sonic Youth are very much on display in an elongated minimal Phillip Glass like intro plucked out on his guitar. However, this gives way to a catchy garage-punk chugging guitar groove which sustains his 15 minute opening track admirably. His vocals relatively quite in the mix, this is an altogether lighter, more melodic and easier on the ear sound than much of Sonic Youth's often challenging hard-core. Perhaps a little phased by the sparse turn out in the venue – packed to the gills for the previous set by Eagulls – Moore is initially rather taciturn but visibly perks up after a “We love you Thurston!” emanates from the audience, and finally breaks his between songs silence with a “Thank you” and introduction of his band as “Slade”! 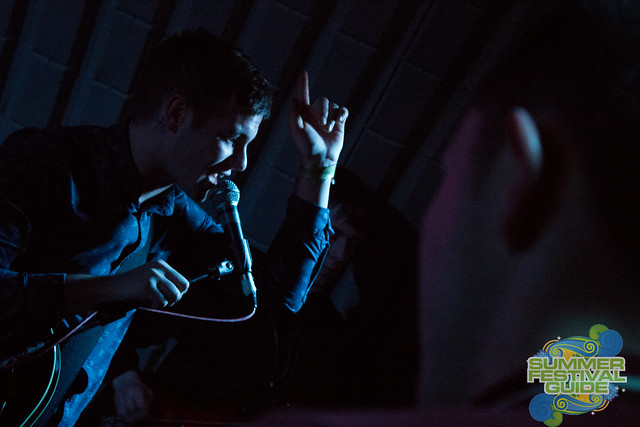 Happily I am able to gain access to the town hall again for the second half of The Cribs set despite there still being a queue, albeit a diminished one. There is little that can go wrong here: the band are local boys made good (strictly speaking from nearby Wakefield rather than Leeds itself), now internationally famous rock stars playing a suitably rapturous homecoming gig. They belt out their catalogue of pop-punk anthems to an adoring crowd, surpassing the response, even, gained by Palma Violets. As has become customary in these parts at major homecoming gigs, the chants of “Yorkshire, Yorkshire” go up at the end and the band politely thank the audience before duly smashing up their instruments, denoting their now fully fledged rock star status.

To finish the day I can't resist making my way back to the Brudenell, which is at the fullest and sweatiest I have ever seen the venue, to catch the end of Slaves set. Keeping the DIY spirit of punk alive this is a primal and energetic two man drum and guitar assault, a Sleaford Mods / Rage Against the Machine hybrid perhaps. The security are kept busy by multiple stage invasions while band members Isaac Holman and Laurie Vincent repay the compliment by jumping into the crowd themselves and completing the final song held aloft before embracing and leaving the stage – the gig clearly a powerful experience for them as well as us, and a great way to end Live at Leeds 2015.